Your Inner Fish: A Journey Into the 3.5-Billion-Year History of the Human Body (8 page)

All the genetic switches that make fingers, arm bones, and toes do their thing during the third to eighth week after conception. Limbs begin their development as tiny buds that extend from our embryonic bodies. The buds grow over two weeks, until the tip forms a little paddle. Inside this paddle are millions of cells which will ultimately give rise to the skeleton, nerves, and muscles that we’ll have for the rest of our lives. 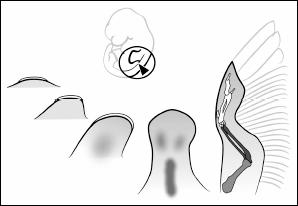 To study how this pattern emerges, we need to look at embryos and sometimes interfere with their development to assess what happens when things go wrong. Moreover, we need to look at mutants and at their internal structures and genes, often by making whole mutant populations through careful breeding. Obviously, we cannot study humans in these ways. The challenge for the pioneers in this field was to find the animals that could be useful windows into our own development. The first experimental embryologists interested in limbs in the 1930s and 1940s faced several problems. They needed an organism in which the limbs were accessible for observation and experiment. The embryo had to be relatively large, so that they could perform surgical procedures on it. Importantly, the embryo had to grow in a protected place, in a container that sheltered it from jostling and other environmental disturbances. Also, and critically, the embryos had to be abundant and available year-round. The obvious solution to this scientific need is at your local grocery store: chicken eggs.

In the 1950s and 1960s a number of biologists, including Edgar Zwilling and John Saunders, did extraordinarily creative experiments on chicken eggs to understand how the pattern of the skeleton forms. This was an era of slice and dice. Embryos were cut up and various tissues moved about to see what effect this had on development. The approach involved very careful microsurgery, manipulating patches of tissue no more than a millimeter thick. In that way, by moving tissues about in the developing limb, Saunders and Zwilling uncovered some of the key mechanisms that build limbs as different as bird wings, whale flippers, and human hands.

Another experiment, initially done by Mary Gasseling in John Saunders’s laboratory, led to a powerful new line of research. Take a little patch of tissue from what will become the pinky side of a limb bud, early in development, and transplant it on the opposite side, just under where the first finger will form. Let the chick develop and form a wing. The result surprised nearly everybody. The wing developed normally except that it also had a
full duplicate set of digits.
Even more remarkable was the pattern of the digits: the new fingers were mirror images of the normal set. Obviously, something inside that patch of tissue, some molecule or gene, was able to direct the development of the pattern of the fingers. This result spawned a blizzard of new experiments, and we learned that this effect can be mimicked by a variety of other means. For example, take a chicken embryo and dab a little vitamin A on its limb bud, or simply inject vitamin A into the egg, and let the embryo develop. If you supply the vitamin A at the right concentration and at the right stage, you’ll get the same mirror-image duplication that Gasseling, Saunders, and Zwilling got from the grafting experiments. This patch of tissue was named the zone of polarizing activity (ZPA). Essentially, the ZPA is a patch of tissue that causes the pinky side to be different from the thumb side. Obviously chicks do not have a pinky and a thumb. The terminology we use is to number the digits, with our pinky corresponding to digit five of other animals and our thumb corresponding to digit one. 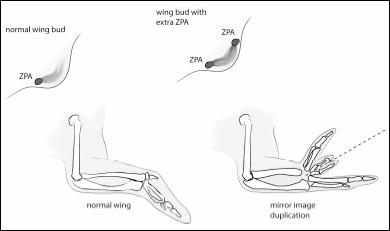 Moving a little patch of tissue called the ZPA causes the fingers to be duplicated.

The ZPA drew interest because it appeared, in some way, to control the formation of fingers and toes. But how? Some people believed that the cells in the ZPA made a molecule that then spread across the limb to instruct cells to make different fingers. The key proposal was that it was the concentration of this unnamed molecule that was the important factor. In areas close to the ZPA, where there is a high concentration of this molecule, cells would respond by making a pinky. In the opposite side of the developing hand, farther from the ZPA so that the molecule was more diffused, the cells would respond by making a thumb. Cells in the middle would each respond according to the concentration of this molecule to make the second, third, and fourth fingers.

This concentration-dependent idea could be tested. In 1979, Denis Summerbell placed an extremely small piece of foil between the ZPA patch and the rest of the limb. The idea was to use this barrier to prevent any kind of molecule from diffusing from the ZPA to the other side. Summerbell studied what happened to the cells on each side of the barrier. Cells on the ZPA side formed digits. Cells on the opposite side often did not form digits; if they did, the digits were badly malformed. The conclusion was obvious. Something was emanating from the ZPA that controlled how the digits formed and what they looked like. To identify that something, researchers needed to look at DNA.

That project was left to a new generation of scientists. Not until the 1990s, when new molecular techniques became available, was the genetic control for the ZPA’s operation unraveled.

A major breakthrough happened in 1993, when Cliff Tabin’s laboratory at Harvard started hunting for the genes that control the ZPA. Their prey was the molecular mechanisms that gave the ZPA its ability to make our pinky different from our thumb. By the time his group started to work in the early 1990s, a number of experiments like the ones I’ve described had led us to believe that some sort of molecule caused the whole thing. This was a grand theory, but nobody knew what this molecule was. People would propose one molecule after another, only to find that none was up to the job. Finally, the Tabin lab came up with a novel notion, and one very relevant to the theme of this book. Look to flies for the answer.

Genetic experiments in the 1980s had revealed the wonderful pattern of gene activity that sculpts the body of a fly from a single-celled egg. The body of a fruit fly is organized from front to back, with the head at the front and the wings at the back. Whole batteries of genes are turned on and off during fly development, and this pattern of gene activity serves to demarcate the different regions of the fly.

Tabin didn’t know it at the time, but two other laboratories—those of Andy MacMahon and Phil Ingham—had already come up with the same general idea independently. What emerged was a remarkably successful collaboration among three different lab groups. One of the fly genes caught the attention of Tabin, McMahon, and Ingham. They noted that this gene made one end of a body segment look different from the other. Fly geneticists named it
hedgehog
. Doesn’t the function of
hedgehog
in the fly body—to make one region different from another—sound like what the ZPA does in making the pinky different from the thumb? That parallel was not lost on the three labs. So off they went, looking for a
hedgehog
gene in creatures like chickens, mice, and fish.

Because the lab groups knew the structure of the fly’s
hedgehog
gene, they had a search image to help them single out the gene in chickens. Each gene has a distinctive sequence; using a number of molecular tools, the researchers could scan the chicken’s DNA for the
hedgehog
sequence. After a lot of trial and error, they found a chicken
hedgehog
gene.

Just as paleontologists get to name new species, geneticists get to name new genes. The fly geneticists who discovered
hedgehog
had named it that because the flies with a mutation in the gene had bristles that reminded them of a little hedgehog. Tabin, McMahon, and Ingham named the chicken version of the gene
Sonic hedgehog,
after the Sega Genesis video game.

Now came the fun question: What does
Sonic hedgehog
actually do in the limb? The Tabin group attached a dye to a molecule that would stick to the gene, enabling them to visualize where the gene is active in the limb. To their great surprise, they found that only cells in a tiny patch of the limb had gene activity: the ZPA.

Knowing the structure of the chicken
Sonic hedgehog
gave other researchers the tools to look for it in everything else that has fingers, from frogs to humans. Every limbed animal has the
Sonic hedgehog
gene. And in every single animal that we have studied,
Sonic hedgehog
is active in the ZPA tissue. If
Sonic hedgehog
hadn’t turned on properly during the eighth week of your own development, then you either would have extra fingers or your pinky and thumb would look alike. Occasionally, when things go wrong with
Sonic hedgehog,
the hand ends up looking like a broad paddle with as many as twelve fingers that all look alike.

We now know that
Sonic hedgehog
is one of dozens of genes that act to sculpt our limbs from shoulder to fingertip by turning on and off at the right time. Remarkably, work in chickens, frogs, and mice was telling us the same thing. The DNA recipe to build upper arms, forearms, wrists, and digits is virtually identical in every creature that has limbs.

How far back can we trace
Sonic hedgehog
and the other bits of DNA that build limbs? Is this stuff active in building the skeleton of fish fins? Or are hands genetically completely different from fish fins? We saw an inner fish in the anatomy of our arms and hands. What about the DNA that builds it?