Your Inner Fish: A Journey Into the 3.5-Billion-Year History of the Human Body (9 page)

Randy Dahn entered my laboratory with a simple but very elegant idea: treat skate embryos just the way Cliff Tabin treated chicken eggs. Randy’s goal was to perform all the experiments on skates that chicken biologists had performed on chicken eggs, from Saunders and Zwilling’s tissue surgeries all the way to Cliff Tabin’s gene experiments. Skates develop in an egg with a kind of shell and a yolk. Skates even have big embryos, just as chickens do. Because of these convenient facts, we could apply to skates many of the genetic and experimental tools people had developed to understand chickens.

Chickens, as Saunders, Zwilling, and Tabin showed, are a surprisingly good proxy for our own limbs. Everything that was discovered by Saunders and Zwilling’s cutting and grafting experiments and by Tabin’s DNA work applies to our own limbs as well: we have a ZPA, we have
Sonic hedgehog,
and both have a great bearing on our well-being. As we saw, a malfunctioning ZPA or a mutation in
Sonic hedgehog
can cause major malformations in human hands.

Sharks and their relatives are the earliest creatures that have fins with a skeleton inside. Ideally, to answer Randy’s question, you would want to bring a 400-million-year-old shark fossil into the laboratory, grind it up, and look at its genetic structure. Then you’d try to manipulate its fossil embryos to learn whether
Sonic hedgehog
is active in the same general place as in our limbs today. This would be a wonderful experiment, but it is impossible. We cannot extract DNA from fossils so old, and, even if we could, we could never find embryos of those fossil animals on which to do experiments.

Living sharks and their relatives are the next best thing. Nobody would ever confuse a shark fin with a human hand: you couldn’t ask for two more different kinds of appendages. Not only are sharks and humans very distantly related, but also the skeletal structures of their appendages look nothing alike. Nothing even remotely similar to Owen’s one bone–two bones–lotsa blobs–digits pattern is inside a shark’s fin. Instead, the bones inside are shaped like rods, long and short, thin and wide. We call them bones even though they are made of cartilage (sharks and skates are known as cartilaginous fish, because their skeletons never turn into hard bone). If you want to assess whether
Sonic hedgehog
’s role in limbs is unique to limbed animals, why not choose a species utterly different in almost every way? In addition, why not choose the species that is the most primitive living fish with any kind of paired appendage, whether fin or limb? Sharks fit both bills perfectly.

Our first problem was a simple one. We needed a reliable source for the embryos of sharks and skates. Sharks proved difficult to obtain with any degree of regularity, but skates, their close relatives, were another matter. So we started with sharks and used skates as our supply of sharks dwindled. We found a supplier who would ship us every month or two a batch of twenty or thirty egg cases with embryos inside. We became a virtual cargo cult as we waited each month for our shipment of precious egg cases.

Work by Tabin’s group and others gave Randy important clues to begin his search. Since Tabin’s work in 1993, people had found
Sonic hedgehog
in a number of different species, everything from fish to humans. With the knowledge of the structure of the gene, Randy was able to search all the DNA of the skate and shark for
Sonic hedgehog
. In a very short time he found it: a shark
Sonic hedgehog
gene.

The key questions to answer were Where is
Sonic hedgehog
active?, and, even more important, What is it doing?

The egg cases were put to use as Randy visualized where and when
Sonic hedgehog
is active in the development of skates. He first studied whether
Sonic hedgehog
turns on at the same time in skate fin development as it does in chicken limbs. Yes, it does. Then he studied whether it is turned on in the patch of tissue at the back end of the fin, the equivalent of our pinky. Yes again. Now he did his vitamin A experiment. This was the million-dollar moment. If you treat the limb of a chicken or mammal with this compound, you get a patch of tissue that has
Sonic hedgehog
activity on the opposite side, and this result is coupled with a duplication of the bones. Randy injected the egg, waited a day or so, and then checked whether, as in chickens, the vitamin A caused
Sonic hedgehog
to turn on in the opposite side of the limb. It did. Now came the long wait. We knew that
Sonic hedgehog
was behaving the same way in our hands and in skates’ and sharks’ fins. But what would the effect of all this be on the skeleton? We would have to wait two months for the answer.

The embryos were developing inside an opaque egg case. All we could tell was whether the creature was alive; the inside of the fin was invisible to us.

The end result was a stunning example of similarity among us, sharks, and skates: a mirror-image fin. The dorsal fins duplicated their structures in a wonderful front-to-back pattern, the same kind we saw with experiments in limbs. Limbs duplicate a limb structure. Shark fins duplicate a shark fin structure as do skates.
Sonic hedgehog
has a similar effect in even the most different kinds of appendage skeletons found on earth today.

One effect of
Sonic hedgehog,
you may recall, is to make the fingers distinct from one another. As we saw with respect to the ZPA, what kind of digit develops depends on how close the digit is to the source of
Sonic hedgehog.
A normal adult skate fin contains many skeletal rods, which all look alike. Could we make these rods different from one another, like our digits? Randy took a small bead impregnated with the protein made by
Sonic hedgehog
and put it in between these identical skeletal rods. The key to his experiment is that he used mouse
Sonic hedgehog.
So now we have a real contraption: a skate embryo with a bead inside that is gradually leaking mouse
Sonic hedgehog
protein. Would that mouse protein have any effect on a shark or a skate?

There are two extreme outcomes to an experiment like this. One is that nothing happens. This would mean that skates are so different from mice that
Sonic hedgehog
protein has no effect. The other extreme outcome would present a stunning example of our inner fish. This outcome would be that the rods develop differently from one another, demonstrating that
Sonic hedgehog
does something similar in skates and in us. And let’s not forget that since Randy is using the protein from a mammal, it means that the genetic recipe would be really, really similar.

Not only did the rods end up looking different from one another, they responded to
Sonic hedgehog,
much as fingers do, on the basis of how close they were to the
Sonic hedgehog
bead: the closer rods developed a different shape from the ones farther away. To top matters off, it was the mouse protein that did the job so effectively in the skates. 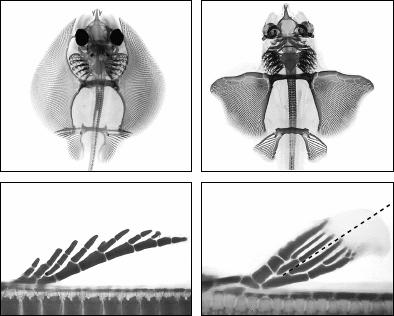 The “inner fish” that Randy found was not a single bone, or even a section of the skeleton. Randy’s inner fish lay in the biological tools that actually build fins. Experiment after experiment on creatures as different as mice, sharks, and flies shows us that the lessons of
Sonic hedgehog
are very general. All appendages, whether they are fins or limbs, are built by similar kinds of genes. What does this mean for the problem we looked at in the first two chapters—the transition of fish fins into limbs? It means that this great evolutionary transformation did not involve the origin of new DNA: much of the shift likely involved using ancient genes, such as those involved in shark fin development, in new ways to make limbs with fingers and toes.

But there is a deeper beauty to these experiments on limbs and fins. Tabin’s lab used work in
flies
to find a gene in
chickens
that tells us about
human
birth defects. Randy used the Tabin lab discovery to tell us something about our connections to
skates.
An “inner fly” helped find an “inner chicken,” which ultimately helped Randy find an “inner skate.” The connections among living creatures run deep.

T
he tooth gets short shrift in anatomy class: we spend all of five minutes on it. In the pantheon of favorite organs—I’ll leave it to each of you to make your list—teeth rarely reach the top five. Yet the little tooth contains so much of our connection to the rest of life that it is virtually impossible to understand our bodies without knowing teeth. Teeth also have special significance for me, because it was in searching for them that I first learned how to find fossils and how to run a fossil expedition.

The job of teeth is to make bigger creatures into smaller pieces. When attached to a moving jaw, teeth slice, dice, and macerate. Mouths are only so big, and teeth enable creatures to eat things that are bigger than their mouths. This is particularly true of creatures that do not have hands or claws that can shred or cut things before they get to the mouth. True, big fish tend to eat littler fish. But teeth can be the great equalizer: smaller fish can munch on bigger fish if they have good teeth. Smaller fish can use their teeth to scrape scales, feed on particles, or take out whole chunks of flesh from bigger fish.

We can learn a lot about an animal by looking at its teeth. The bumps, pits, and ridges on teeth often reflect the diet. Carnivores, such as cats, have blade-like molars to cut meat, while plant eaters have a mouth full of flatter teeth that can macerate leaves and nuts. The informational value of teeth was not lost on the anatomists of history. The French anatomist Georges Cuvier once famously boasted that he could reconstruct an animal’s entire skeleton from a single tooth. This is a little over the top, but the general point is valid; teeth are a powerful window into an animal’s lifestyle.

Losing Touch by Sandra Hunter
Armadale by Wilkie Collins
These Boots Weren't Made for Walking by Melody Carlson
The Long Way Home by Mariah Stewart
The Stolen Child by Keith Donohue
East of the Sun by Julia Gregson
The Higgs Boson: Searching for the God Particle by Scientific American Editors
The Bride Wore Denim by Lizbeth Selvig
McQuade: The Lone Wolf Takes A Mate by Richards, Lynn
Everlasting Light - A Civil War Romance Novella by Andrea Boeshaar
Our partner