A Government of Wolves: The Emerging American Police State (10 page)

"The very first essential for success is a perpetually constant and regular employment of violence."
99
–ADOLPH HITLER,
Mein Kampf

T
he stomping boot is something most people never really thought they would see in America, but like all authoritarian trends in government, it has crept up on us while we were unaware.

"What happened here," observed historian Milton Mayer, "was the gradual habituation of the people, little by little, to being governed by surprise; to receiving decisions deliberated in secret; to believing that the situation was so complicated that the government had to act on information which the people could not understand, or so dangerous that, even if the people could understand it, it could not be released because of national security."
100
Although Mayer was writing about how authoritarianism rose to power in Nazi Germany, his description of the emergence of a police state echoes what we are seeing in modern America.

Big Brother–a euphemism for Big Government–is here. In fact, it looks as if the government is taking George Orwell's novel
1984
and implementing it as government policy.

George Orwell saw what might come to pass and it frightened him–a society where thinking the wrong thing (a "thought crime"), disagreeing with the prevailing view of society, or being the wrong skin color and/ or from the wrong social class would bring the stomping boot down upon you. In a police state, you're either part of the state's ruling elite or you're its subject. As police chief Bryant says to Rie Deckard when trying to recruit him to return to police work in the 1982 film
Blade Runner:
"You're either a cop or little people." Likewise, when Winston Smith decides to subtly resist Big Brother in
1984
, he finds out rather quickly what it means to be "little people"–isolation, torture, and "re-education."

Yet it is not Big Brother that defeats us in the end. It is what we fear that subdues us. We have been conditioned to fear the criminal, the terrorist, the protester, the police, and now even our next-door neighbor. "An atmosphere of fear is itself a powerful force," writes former presidential advisor Bertram Gross in his book
Friendly Fascism
. "Present fears, to recall Macbeth's words, are even 'less than horrible happenings.' With but slight expectations of force, an all-pervasive sense of fright may be produced in the invisible spheres of life. An ounce of actual violence can yield a pound of terror."
101

SWAT team raids occurring across America? Protesters tasered, pepper sprayed, beaten, and shot? The military on American streets? Yes, it is here. And it is definitely time to realize that what we call "the government" is not what it seems. Unfortunately, most Americans have come to believe that the zookeeper is friendly. All the while, freedom continues to diminish. We had better wake up or we will become the Winston Smiths of our time.

"Uncontrolled search and seizure is one of the first and most effective weapons in the arsenal of every arbitrary government... Among deprivations of rights, none is so effective in cowing a population, crushing the spirit of the individual and putting terror in every heart."
102

T
he role of law enforcement, especially local police officers, has drastically changed from when I was a child in the 1950s. The friendly local sheriff in
The Andy Griffith Show
has been replaced by grim-faced, armed warriors quick to do the government's bidding, with little to no thought for the Constitution. 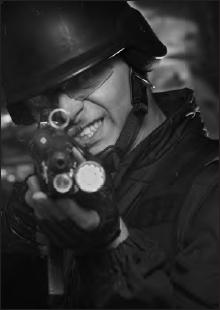 The changing face of law enforcement

One clear distinction between local police and military forces used to be the kinds of weapons at their disposal. With the advent of modern police weaponry and the introduction of SWAT teams into almost every police force in the nation, that is no longer the case. Standard SWAT team weaponry includes battering rams, ballistic shields, "flashbang" grenades, smoke grenades, pepper spray, and tear gas. Moreover, while "non-lethal" weapons such as tasers, stun guns, rubber bullets, and other weapons of compliance might pale in comparison to the arsenal of deadly weapons available to local law enforcement, their effect on our freedoms is no less severe.

Undoubtedly, as the militarization of law enforcement continues to grow, armed police officers (and federal agents armed to the hilt) have become a force to be reckoned with. Consequently, at all levels–federal, local, and state–the government and the police have merged. In the process, they have become a "standing" or permanent army, one composed of full-time professional soldiers who do not disband.

These permanent armies are exactly what those who drafted the U.S. Constitution and Bill of Rights feared. They knew that despotic governments have used standing armies to control the people and impose tyranny. For example, James Madison, in a speech before the Constitutional Convention in the summer of 1789, warned: "A standing military force, with an overgrown Executive will not long be safe companions to liberty. The means of defence against foreign danger, have been always the instruments of tyranny at home."
103
As Madison foresaw, "instruments of tyranny" can be used by a government to wage war against its citizens.

In communities large and small across America, local law enforcement are arming themselves to the teeth with weapons previously only seen on the battlefield.
104
Local police–clad in jackboots, helmets, and shields and wielding batons, pepper spray, stun guns, and assault rifles–have increasingly come to resemble occupying forces in our communities. As investigative journalists Andrew Becker and G.W. Schulz point out, "Many police, including beat cops, now routinely carry assault rifles. Combined with body armor and other apparel, many officers look more and more like combat troops serving in Iraq and Afghanistan."
105

The fifty-person police department in Oxford, Alabama, for example, has acquired $3 million worth of equipment, including M-16s, infrared goggles, and an armored vehicle.
106
All of these new toys lead to specious SWAT team raids that eviscerate the Fourth Amendment, conditioning us to the vision of police in jackboots with assault rifles patrolling our streets. 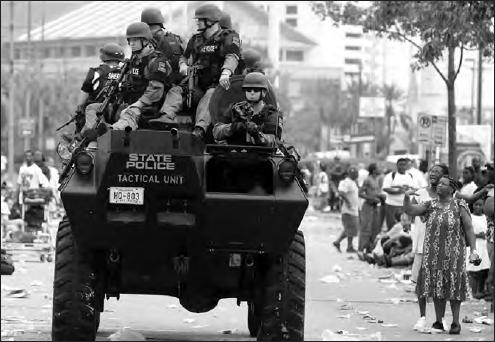 Thus, what began with the militarization of the police in the 1980s during the government's war on drugs has snowballed into a full-fledged integration of military weaponry, technology, and tactics into police protocol. For example, in 1981 Congress passed the Military Cooperation with Law Enforcement Act, which granted the military the power to help local police forces wage the "war on drugs" by sharing equipment, training, and intelligence. In 1997 Congress approved the 1033 Program, which allows the Secretary of Defense to transfer surplus military supplies and weapons to local law enforcement agencies without charge–the only thing that local police departments have to pay for is shipping and future maintenance. And police departments aren't just getting boots and medkits–they're receiving assault rifles, mini-tanks, grenade launchers, and remote controlled robots.

Since 1997 more than 17,000 agencies have taken advantage of the federal government's 1033 Program, acquiring $2.6 billion dollars' worth of weapons and equipment,
108
and demand is only getting higher. In fact, a record-setting half a billion dollars' worth of military equipment flowed from the U.S. Department of Defense to local police in 2011, with another $400 million worth of equipment reaching local police by May 2012.
109

As Becker and Schulz report, more than $34 billion in federal government grants made available to local police agencies in the wake of 9/11 "ha[ve] fueled a rapid, broad transformation of police operations ... across the country. More than ever before, police rely on quasi-military tactics and equipment."
110
For example:

If terrorists ever target Fargo, N.D., the local police will be ready. In recent years, they have bought bomb-detection robots, digital communications equipment and Kevlar helmets, like those used by soldiers in foreign wars. For local siege situations requiring real firepower, police there can use a new $256,643 armored truck, complete with a rotating turret.
111

No one can say exactly what has been purchased in total across the country or how it's being used, because the federal government doesn't keep close track. State and local governments don't maintain uniform records. But a review of records from forty-one states obtained through open-government requests, and interviews with more than two-dozen current and former police officials and terrorism experts, shows police departments around the United States have transformed into small army-like forces.
112

In Montgomery County, Tex., the sheriff's department owns a $300,000 pilotless surveillance drone. In Garland County, Ark., known for its pleasant hot springs, a local law enforcement agency acquired four handheld bulletproof protective shields costing $600 each. In East Baton Rouge, La., it was $400 ballistic helmets. In Augusta, Maine, with fewer than 20,000 people and where an officer hasn't died from gunfire in the line of duty in more than 125 years, police bought eight $1,500 tactical vests. And for police in Des Moines, Iowa, it was two $180,000 bomb robots.
113 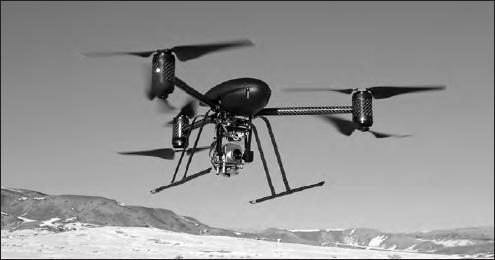 The purchases get even more extravagant the deeper you go. For instance, police in Cobb County, Georgia, have an amphibious tank,
114
while Richland County, South Carolina, police have a machine-gun-equipped armored personnel carrier called "The Peacemaker," the likes of which had previously only been seen in war zones.
115
One popular piece of equipment, the BearCat, a "16,000-pound bulletproof truck equipped with battering rams, gun ports, tear-gas dispensers and radiation detectors," which costs $237,000, has been sold to over 500 local agencies.
116
Police in Hanceville, Alabama, (population 3,000) have acquired $250,000 worth of equipment.
117

Reckless Promise by Jenny Andersen
Icebound by Julie Rowe
Oxford Whispers by Marion Croslydon
The Other Man by R. K. Lilley
Miracle by Elizabeth Scott
Born to Be Wild by Catherine Coulter
Young Henry: The Rise of Henry VIII by Robert Hutchinson
Bargaining for the Billionaire by JM Stewart
Too Many Murders by Colleen McCullough
Little Red Gem by D L Richardson
Our partner