A Government of Wolves: The Emerging American Police State (9 page)

Once you add facial recognition software to the mix, it won't be long before we have billboards capable of identifying passersby
81
IBM has already started developing real-world advertisements that react to people based upon RFID chips embedded in their drivers' licenses and credit cards.
82

REALITY CHECK:
The Department of Homeland Security is working on its Future Attribute Screening Technology or FAST, which will utilize a number of personal factors such as "ethnicity, gender, breathing, and heart rate to 'detect cues indicative of mal-intent.""
83
At least one field test of this program has occurred, somewhere in the northeast United States.

FICTION:
In the film, a hacker accesses visions from the "precog" Agatha's mind and plays them back for John Anderton.

REALITY CHECK:
While still in its infancy, technology that seeks to translate human thoughts into computer actions is slowly becoming a reality. Jack Gallant, a neuroscientist at UC Berkeley, has created software capable of translating viewers' thoughts into reconstructed visual images.
84
The Emotiv corporation is developing technology which will be capable of reading a person's thoughts and using them as inputs to operate machinery, like voice recognition but with brain signals.
85
Similar devices are being developed to translate thoughts into speech.
86

REALITY CHECK:
A variety of less-lethal weapons have been developed and deployed in the years since
Minority Report
hit theaters. In 2007 the Department of Homeland Security granted a contract to Intelligent Optical Systems for an "LED Inca-pacitator," a flashlight-like device that emits a dazzling array of pulsating lights, incapacitating its target by causing nausea and vomiting.
87
A heat ray device from the Raytheon corporation, the "Assault Intervention Device" causes an unbearable burning sensation on its target's skin.
88
The Long Range Acoustic Device, which emits painful noises in order to disperse crowds, has been seen at the London Olympics
89
and G20 protests in Pittsburgh.

REALITY CHECK:
The Defense Advanced Research Projects Agency (DARPA), a division of the U.S. Department of Defense, is also working on turning insects into "cybugs" by utilizing and expanding upon the insects' natural abilities (e.g., using bees' olfactory abilities for bomb detection). Researchers hope to outfit June beetles with tiny backpacks complete with various detection devices, microphones, and cameras. These devices could be powered by the very energy produced by the bugs beating their wings, or the heat they give off while in flight.
90 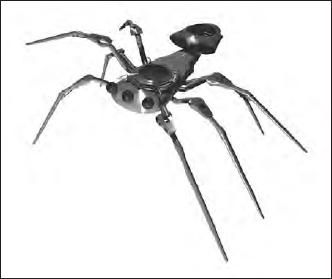 A Representation of a Future Micro Autonomous Robot

Many models of small robotic fliers have been developed by the military since World War II. As far back as the 1970s the CIA was working on an "insectothopter," a gasoline-powered dragonfly-style aerial surveillance drone. A 2007 article in the
Washington Post
used reported sightings of dragonfly drones at protests in Washington, D.C. and New York as the springboard for an in-depth look at the government's ability to utilize robobug technology.
91
That same year, Japanese scientists at the International Symposium on Flying Insects and Robots unveiled radio-controlled drones resembling hawk moths, complete with four-inch wingspans.
92

These are but a few of the technological devices now in the hands of those who control the corporate police state. Will we be able to evade these "gadgets" and those that will follow? Hide from them? Refuse them? If not, then the future we face is a rather frightening one, especially now that fiction, in essence, has become fact.

Remember, we all look like suspects to police state surveillance cameras and computers. Before long, we all may be mere extensions or appendages of the police state–all suspects in a world commandeered by "gadgets."

L
ong before there was Steven Spielberg's
Minority Report
or any of the other futuristic films and books prophesying a totalitarian future, there were George Orwell's
1984
and Aldous Huxley's
Brave New World
. Published decades ago as political satires, both novels have become nothing short of political prophecies–prophecies that are being fulfilled in our own times.

Both novels present differing blueprints for how police states come into power. In the Orwellian scenario, the culture conforms to a prison complete with terror, storm trooper raids, and detention camps. The Huxleyan scenario presents a culture so consumed with and distracted by entertainment (and/or technological gadgets) that the citizenry does not realize they occupy a prison until it is too late. Both scenarios rely on the education system to instill compliance in young minds.

Visualizing the total loss of freedom in a world dominated by technology and its misuse, and the crushing inhumanity of an omniscient state, Orwell's
1984
portrays a global society of total control in which people are not allowed to have thoughts that in any way disagree with the corporate state. There is no personal freedom, and advanced technology has become the driving force behind a surveillance-driven society. Snitches and cameras are everywhere, and people are subject to the Thought Police, who arrest and "re-educate" anyone guilty of thought crimes. The government, or "Party," is headed by Big Brother, who appears on posters everywhere with the words: "Big Brother is watching you." Orwell's story revolves around Winston Smith, a doubter who turns to self-expression through his diary and then begins questioning the ways and methods of Big Brother before being "re-educated."

Huxley's
Brave New World
provides a different vision about how a totalitarian society arrives. It is one dominated by a consumer society driven by entertainment–thus, lessening the need for the coercion evident in Orwell's
1984
. As professor Neil Postman writes:

What Huxley teaches is that in the age of advanced technology, spiritual devastation is more likely to come from an enemy with a smiling face than from one whose countenance exudes suspicion and hate. In the Huxleyan prophecy, Big Brother does not watch us, by his choice. We watch him, by ours. There is no need for wardens or gates or Ministries of Truth. When a population becomes distracted by trivia, when cultural life is redefined as a perpetual round of entertainments, when serious public conversation becomes a form of baby talk, when, in short, a people become an audience and their public business a vaudeville act, then a nation finds itself at risk: culture-death is a clear possibility
94

Television and the Internet (as it extends itself through cell phones, laptops, and tablets) are the new mediums that equip those who control society with an efficient program for change. Huxley believed, as Postman writes, that we are in "a race between education and disaster, and he wrote continuously about the necessity of our understanding the politics and epistemology of media. For in the end, he was trying to tell us that what afflicted the people in
Brave New World
was not that they were laughing instead of thinking, but that they did not know what they were laughing about and why they had stopped thinking."
95
Nevertheless, they kept smiling.

Coupled with the Huxleyan vision, much of what Orwell envisioned in his futuristic society has now come to pass. Surveillance cameras are everywhere. Government agents listen in on our telephone calls and read our emails. Political correctness (a precursor to "thought crimes")–a philosophy that discourages diversity and challenges the right of certain people to speak–has become a guiding principle of modern society. The courts have eviscerated the Fourth Amendment protections against unreasonable searches and seizures of our bodies, homes, and personal possessions. In fact, SWAT teams battering down doors without search warrants and FBI agents acting as a secret police that investigate and "detain" dissenting citizens have become all-too-common occurrences in contemporary America. We are increasingly ruled by multi-corporations wedded to the police state. And much of the population is either hooked on illegal drugs or legal ones marketed heavily by the pharmaceutical industry.

When all is said and done, however, "An Orwellian world is much easier to recognize, and to oppose, than a Huxleyan. Everything in our background has prepared us to know and resist a prison when the gates begin to close around us." As professor Neil Postman writes in
Amusing Ourselves to Death:

We take arms against such a sea of troubles, buttressed by the spirit of Milton, Bacon, Voltaire, Goethe, and Jefferson. But what if there are no cries of anguish to be heard? Who is prepared to take arms against a sea of amusements? To whom do we complain, and when, and in what tone of voice, when serious discourse dissolves into giggles? What is the antidote to a culture's being drained by laughter?
96 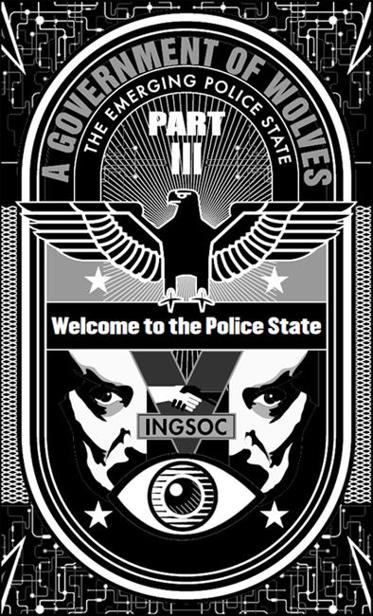 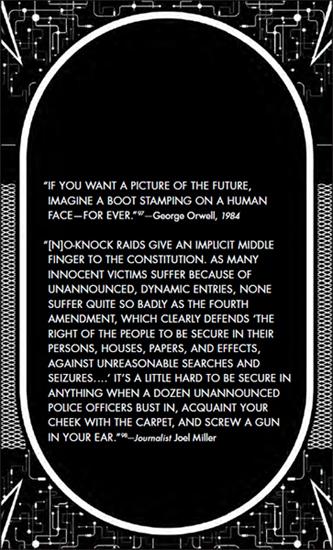