A Lesson in Desire: Season of Desire Part 3 (Seasons Quartet) 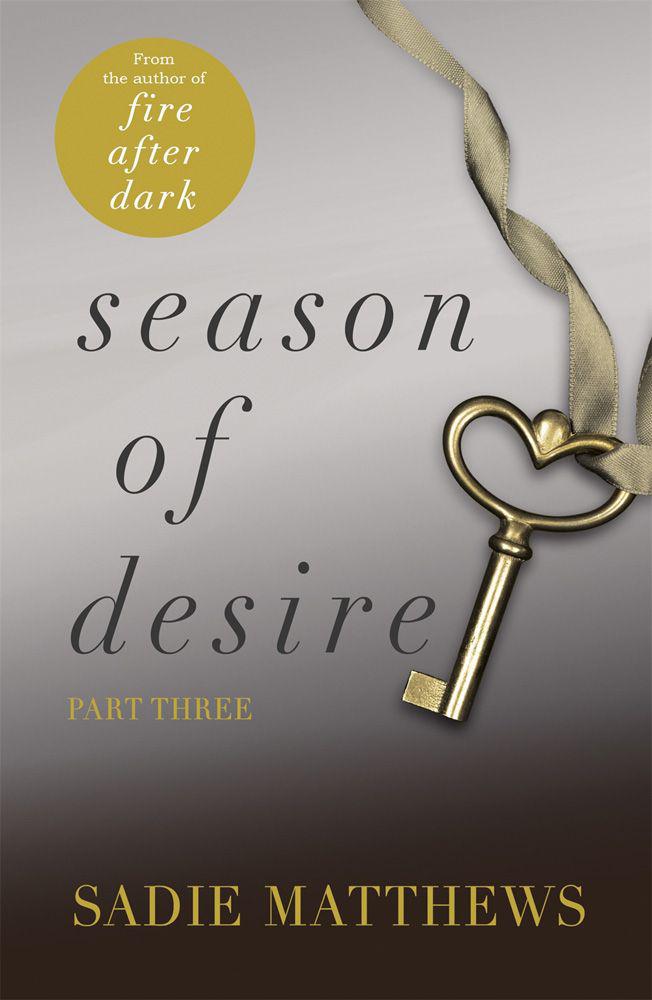 A Lesson in Desire

Work has been asserted by her in accordance with the

reproduced, stored in a retrieval system, or transmitted, in any

publisher, nor be otherwise circulated in any form of binding or

Have you read the After Dark series?

My father is advancing towards me, his face split by a beaming smile, his small brown eyes almost lost in the creases of his eyelids and the folds of his cheeks.

I’m wearing a white hospital gown and lying in a bed between pristine white sheets, a blood pressure sleeve around my upper arm that automatically squeezes me every few minutes and updates the information on the monitor at my side. I’ve no idea what the numbers mean but the nurse who regularly glides in to examine them doesn’t seem particularly concerned, so I guess I’m all right. I was brought straight here after we were rescued this morning, and I've been thoroughly examined, tested and monitored ever since.

‘Hi, Dad.’ I smile wanly as he comes up, drops a kiss on my cheek and grasps my hand. He sits down on the chair by my bedside, leaning in towards me.

‘How are you, sweetheart? Are you okay?’ He scans me anxiously. I think I can see the signs of strains on his face: his eyes are bloodshot and dark bags puff out underneath them, his forehead is lined and his complexion has a greyish tinge.

I smile up at him, comforted by the fact that he’s clearly been worried about me. ‘I’m fine, Dad, really. I’m very lucky.’

‘I’m so relieved to have you safely back where you belong. What the hell happened to you?’ He squeezes my hand a little tighter, gazing into my eyes. ‘Tell me the whole story.’

I stare back at him, almost helplessly. The two days since the crash were the longest of my life. So much happened, and every moment is vivid in my memory. But when my father asks me about it, all I can see is Miles: his piercing gaze, the rippling muscles, the glory of his huge cock and the sight of his dark head between my thighs… My stomach somersaults in agonised pleasure at the recollection, forcing me to close my eyes and gasp involuntarily.

‘Was it that bad?’ Dad asks tenderly. ‘I can’t imagine what you’ve gone through.’

‘So,’ he continues, ‘start at the beginning. You were supposed to be getting a flight to LA, right?’

I see myself in the back seat of the Mercedes as I was that day. It’s as though I’m looking at a different person as I remember how I ignored Miles or treated him with utter disdain. I can picture the back of his dark head and broad shoulders, his huge hands on the steering wheel, as I rapped out my orders.

God, I was awful.
I can hardly repress a shudder as I think of it.
What did he think of me? He must have held me in complete contempt.

I open my mouth to start the story, suddenly realising that I’m desperate to tell it, but just then the door opens and the nurse bustles in, so I close it again. I’ve learned to keep quiet when strangers are about, unless I want to see details of my life appearing in gossip columns. However, this nurse is exactly the kind of efficient, discreet person I’d expect to find in a Swiss private hospital. She comes over and examines the monitor by my bedside, just as the sleeve around my arm judders into life again and starts squeezing me. As it releases its hold, she looks at my blood pressure reading and nods.

‘She’s going to be fine,’ the nurse replies in faintly accented English. ‘There’s nothing to worry about, all signs are normal.’ She turns to me and smiles. ‘Considering you’ve just spent two days in freezing temperatures, you couldn’t be better. You were obviously well looked after.’

I smile back at her, longing to tell her all about Miles and how amazing he is: how he rescued me, found me shelter and made sure I was safe. But I don’t want to say anything in front of my father. It seems really important to keep all that to myself for now.

The nurse turns back to him. ‘There is the bruising, of course, but it doesn’t seem to have caused any serious damage.’

‘Across your daughter’s chest. The cause appears to be the seatbelt of the car. The doctor has examined her thoroughly and is confident that she will heal quickly.’

‘Oh, honey.’ Dad turns back to me, his eyes moistening. ‘You were hurt! I can’t bear to think about it…’

‘I’m fine,’ I say reassuringly. ‘And things could have been a lot worse than that. I was lucky to get out of there with just a bruise.’

As the nurse makes her exit, my father’s face darkens and he says, ‘Believe me, I’ve thought very hard about how things might have turned out. I can’t believe that I came so close to losing you. There are questions to ask about how this happened, you can be damn sure about that.’

His belligerent expression frightens me: it tells me that Dad intends to make someone pay for this episode. Any hint of danger to me, or my sisters, brings out the worst in my father.

Oh God, there’s only one person he’s going to blame for it – and it isn’t going to be me…

I push myself up on an elbow in my desire to start explaining that the accident was entirely my fault, when the door to my room opens again and I see a sight that completely takes my mind off the urgent need to defend Miles.

There she is: slender with knockout curves emphasised by one of her trademark bandage dresses. She stands precariously balanced on huge heels, her toffee-coloured hair spilling over her shoulders in glossy waves, false eyelashes framing her wide green eyes. She pouts and says, ‘Hi, Freya. How are you?’ before wiggling into my room and sitting down in the chair next to my father’s, right next to my bed.

I’m speechless with fury. What the hell is she doing here – in
my
hospital room?

Dad turns to look at her with that stupid cow-like expression he has whenever Estella is anywhere near him. ‘Baby, that’s so sweet of you. Freya’s going to be fine, aren’t you?’

I nod, not looking at her. I know my expression must have become sullen because my father says, ‘Estella wanted to come and see how you were herself. She’s been worried sick, haven’t you, baby?’

Estella pouts again and nods, fluttering her ridiculous lashes. It makes me want to grind my teeth in fury. How can my father not see through this pathetic act? It’s like the vamp ABC, a childish idea of what a sexpot is – all cartoon curves and breathy voice and vacant expression. Estella was not like this when she was assistant to my sisters and me; then, she was a smart cookie who had an obvious sharpness about her. That was before she sensed that my father was lonely and vulnerable and might be susceptible to her if she drew a bit more attention to herself. Suddenly, she changed: her skin became a dark golden brown with as much of it on display as possible, from pumped-up décolletage to long gleaming legs. She gained caramel highlights and hair extensions, whiter teeth and long varnished nails. She layered on make-up, and her usual low-key wardrobe was ditched in favour of figure-hugging dresses and sky-high heels. Sure enough, Dad couldn’t help but notice the change as she made a special point of leaning towards him, touching his arm and giggling girlishly whenever he was about. I was furious he couldn’t see through her obvious game, but there was nothing I could do. I wanted to warn him against her, and tell him that she was only after him for his money but by the time it was evident that Estella’s tricks were working, my father was already enchanted and would not have listened to a word against her. Besides, he seemed to think that she was really in love with him. How could I tell him that she was faking it? Surely he could work that out for himself? I mean, I love my dad but he’s a short, stocky man in his late fifties with thinning hair and a thickening middle. He’s not exactly love’s young dream, and if he weren’t rich, a woman like Estella would not look at him twice.

But here she is, insinuated into my father’s affections. And if he’s bringing her to my bedside in the hospital, then I have to contemplate the likelihood that Estella might be a permanent fixture.

Possibly even my future stepmother?

I want to shudder at the thought.

‘I’m so glad to see that you’re okay,’ Estella says in her breathy voice. ‘We’ve been so worried about you!’ Her big green eyes stare at me, wide and seemingly innocent.

‘Thanks,’ I say through clenched teeth. I can’t bear seeing her here.

This is hardly appropriate, for crying out loud! I’m in hospital, recovering from a frightening ordeal. The last person I want here is Estella.

I look pointedly away from her and say to Dad, ‘Where are Flora and Summer?’

‘They’re at home,’ he replies. ‘Flora was in Paris but she flew back today. Summer never left, first because of the weather and then because you were missing. She’s been by the phone the entire time, desperate for news about you. She wanted to come here, of course, but I told her it would be better to wait until you had a chance to recover. The doctor says he expects you’ll be out soon.’

I nod. I didn’t expect to be in the hospital for long. I’m perfectly fine, for one thing. But they were determined to check me out thoroughly, no doubt to justify the enormous bill. ‘Dad…’ I say hesitantly. I wish Estella weren’t here. Despite her village-idiot act, she’s no fool. But I can’t hold out any longer, I have to ask. ‘Where’s Miles? Is he okay?’

That hard look comes into my father’s eyes again. ‘He’s fine. He’s back at the house.’

‘What is it?’ I say quickly. ‘Is something wrong? Was Miles checked out by a doctor?’

‘Oh yes. He’s got a clean bill of health. He’s perfectly able to answer the questions Pierre and I will be putting to him.’

‘Dad, you mustn’t blame Miles for this. It wasn’t his fault. It was mine.’ I gaze at him beseechingly. ‘I made him drive me to the airport even though he told me that the weather conditions were unsafe. I even told him to go faster. He was obeying my orders.’

‘Maybe,’ my father says, his tone harsh. ‘But he’s the expert. He should have used his judgement and refused. That’s what I pay him for. He put your life in danger, honey. That’s hard to forgive.’

Icing Ivy by Evan Marshall
The Yellow Admiral by Patrick O'Brian
Don't Look Now by Richard Montanari
Bon Appetit by Sandra Byrd
I Left My Back Door Open by April Sinclair
Anathema (Causal Enchantment, #1) by K.A. Tucker
The Widow's Tale by Mick Jackson
Winnie Griggs by The Bride Next Door
Fierce Possession (Touched By You 9) by Trent, Emily Jane
Seduced by the Scrum-Half (Strathstow Sharks) by Carter, Mina
Our partner