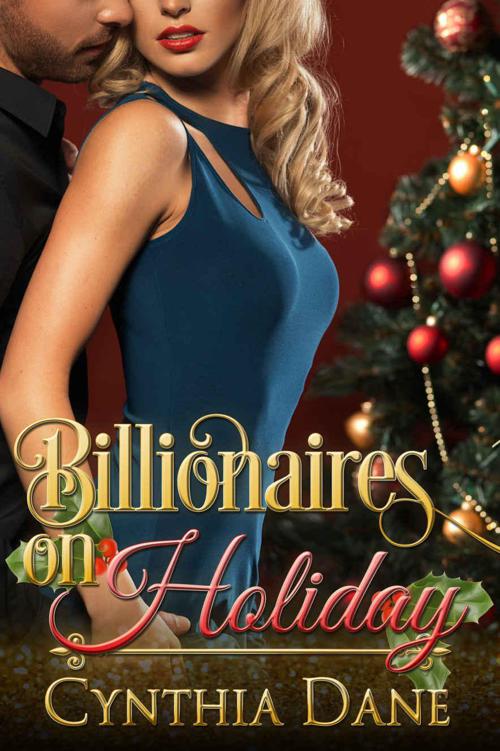 Keep up with Cynthia’s latest releases by joining her mailing list! Behind the scenes, first looks, and even some free snippets!

The car maneuvered along curvy, somewhat icy roads. Although the tinted windows were closed off to anything but the shadows of frost covered trees, Monica spent an inordinate amount of time gripping handles and making sure her seatbelt was securely fastened. Every time she looked over at her fiancé Henry, she saw him sans seatbelt and chastised him about car safety – especially in this early December weather.

“I’d rather you not be dead for the holidays,” she grumbled, slapping the end of his seatbelt into his lap. “Let alone for our wedding. I don’t fancy marrying a corpse.”

Sighing, Henry finally relented. “Just think, though. You get all my money.”

“I’d rather have you than your money.”

Henry snorted. “We cremate in my family. You could have my ashes…”

“Can we not have this discussion?” The car, although expertly driven by Henry Warren’s long-time chauffeur, skidded a bit on a long stretch of road. “I’m anxious thinking about it.”

“Sorry, Princess.” Henry put his hand on Monica’s, soothing her frayed nerves. “You know I jest.”

They exchanged wry smiles. Monica took a deep breath and tried to ignore the large car’s near inability to navigate these mountainous roads.

Across from her, another family member rolled her eyes. “Still pissed you’re dragging me along for this,” Eva, Henry’s younger sister, said. “I could be snug in bed right now. Me, some tea, a dirty book or movie…”

“We get it,” Henry said, mouth straight. “You’d rather be home.” Before his sister could protest, he undid his seatbelt again and leaned forward, coming a nose length away from Eva. “But if I didn’t get you out of that house, you would have invited all your grad school group project people over and screamed at each other until the staff complained.”

Eva sniffed. “Don’t know what you’re talking about.” She threw a lot of smack into her big brother’s face, but at the end of the day Henry was the only person who could make her cross her arms with a huff. “Not my fault Cornelia doesn’t know her asshole from a thesis statement…”

Monica tuned them out and instead paid attention to the messages popping up on her phone. They had apparently emerged from a dead zone. The only message of note came from Judith, the woman in charge of Monica’s business for the weekend, the busiest time of the week for work.
Wish I didn’t have to be away right now.
Yet when her busy fiancé said he scored them a private villa on one of the most beautiful mountains in the country for the whole weekend… well, a woman didn’t say no to that. She and Henry wouldn’t have time for romance on that scale until after the new year. The holidays would be nothing but entertaining his fussy parents and managing Christmas parties on behalf of the whole family. They planned on going to Hawaii in early January, but…

Still, Monica didn’t like being away from work when it was the busiest. Judith was a capable hostess and manager in her boss’s absence, but it would be the last busy weekend of the year and Monica knew how to milk the most money from clients. Her business would need the extra funds to sustain the closure between Christmas and New Year’s so her employees and staff could go home for the holidays. Some would remain behind to tend the Château she owned and have their own Christmas festivities, but, well, Monica was a control freak at times.

She may be in a submissive relationship with her Dom and fiancé Henry, but that didn’t stop her from being a
control freak.

“Relax,” Henry said, rubbing Monica’s arm. “This weekend is all about relaxing.” He leaned in and whispered into his fiancée’s ear. “In more ways than one.”

Monica couldn’t suppress a grin. When she caught Eva’s eye from across the car, she politely sat up straight and pursed her lips.

They reached the holiday villa in another twenty minutes. The driver produced the invitation from James Merange, the owner of the villa, to the security guard. Henry had sprung the invitation a week ago, stating that he was taking fiancée and sister on a getaway to ease the tension growing at Warren Manor. The weather was making everyone moody. The holidays stressed Monica out… not to mention the wedding plans. It also didn’t help that Eva was finishing up a semester at grad school and experienced such hormonal mood swings lately that one of her maids quit.

“Madam,” a graying butler said as he opened Monica’s car door and helped her out. The driver opened the doors for Eva and Henry. “Welcome to Winter Villa.” The butler tipped his hat to the Warrens and invited them inside.

It was a quaint villa. Well, quaint compared to the manor they came from. Quaint compared to Monica’s place of work and weekend home. The villa was only three stories tall, with the third story sectioned off and styled for the year-round help, who consisted of the butler, a chef, and a maid. James Merange and his girlfriend Gwen lived here half of the month, but they were away for the weekend.

Three stories, a handful of bedrooms, and a spacious study that was cozy enough to keep out the winter chill. Monica was grateful to sit in front of the roaring fireplace and let the butler handle her luggage.
I’m just glad to be out of that damned car.
She accepted a small drink of brandy to bash away the last of her nerves.

“You’ll be in the second room from the right,” the butler said, pointing to the staircase in the foyer. “Miss Warren will be across the hall.”

“Great,” Eva mumbled as she poured herself a glass of brandy. “I can hear these two going at it all night.”

Eva made an exasperated look. Although she was used to Monica making references to kinky sex with Henry, Eva still made faces. The grossest thing Monica could do was infer that Henry Warren had
sex.
Sometimes it became a fun game to play when she was bored and Eva was restless around her.

This would be a fun weekend, indeed.

“Talked to the chef in the kitchen,” Henry said, sitting in a chair across from Monica, although he also addressed his sister behind him. “Roast and all the trimmings for dinner.”

Before Monica could express how salivating that sounded, the butler loudly walked by the study and threw open the front door. “Get the Fourth Room ready, Bernadette,” he told the maid. “We’ve got more guests.”

The Warrens gave each other perturbed glances.
Oh, brother.

“Whose car is that?’ Kathryn asked, pointing across the dashboard of boyfriend Ian’s Ferrari. “I thought James and Gwen weren’t going to be here this weekend.”

Ian parked the car and brushed a new frost off the rearview mirror. He followed Kathryn’s pointer finger and shrugged. “Perhaps this is a car they keep here. No big deal. We’ve got the place all to ourselves this weekend.”

He flashed Kathryn a wicked grin. The heat had yet to dissipate from the car, even though the engine was off. This gave him plenty of ample time to take his girlfriend’s hand and move it toward his thigh.

“Yes, plenty of time,” Kathryn said, snatching her hand back. She checked her blond French twist in the mirror, pretending that Ian was the least interesting being in the world. His poor, fragile,
manly
ego. “So keep it in your pants for now. We can fuck all night.”

She opened the door, stepping into the frosty air. Although it was three in the afternoon, it was already halfway to dark, with twilight looming on the horizon and the trees blotting on what light there was. Kathryn didn’t doubt that Winter Villa was even better in the summer, but James swore up and down that there was no place more romantic than his side villa up here in the mountains. Kathryn didn’t give a shit. She wanted a getaway with the boyfriend she hadn’t seen much of in the past few weeks due to international conferences keeping them apart.

“My baby is going to get cold standing out here.” Ian curled his arm around her, sharing his thick jacket and scarf with her. Kathryn was dressed in a wool vest, jeans, and boots, but she had to admit that even without snow she was starting to freeze in her bones. Best to go inside.

Ian pulled their bags out of the back of his car. Kathryn took hers, although Ian offered to carry it. “Do you want my hand turning blue and freezing off?” It was only a few yards to the front door. Somehow, Kathryn would live fine without Ian’s chivalry.
I may be a billionaire heiress, but I know how to carry my own stupid bags.
Even if hers were heavy. She had packed… a few things. Because the thought of borrowing James and Gwen’s was gross.

The butler met them at the front door. “You must be Mr. Mathers and Ms. Alison.”

Ian extended his free hand and shook the butler’s. “We heard you were expecting us.”

Something quaked in the butler’s voice. “Indeed. Mr. Merange informed me that you and the others would be arriving.”

Both Ian and Kathryn stopped cold in the heat of the foyer. “The… others?”

She stood straight with a start, whipping her head around to find the source of her best friend Eva’s voice.
What is she doing here?
Last she saw Eva was three days ago, for lunch. She said nothing about being at the Winter Villa this weekend!

And yet there she was, draping herself across the study room door with a dumb grin on his striking face. Cheekbones made of razor wire cut into the air as Eva opened her mouth once more. “Fancy seeing your fair ass here. Oh, and you brought Mathers with you.”

Ian looked like he was about to throw up a landmine. The last person he probably wanted to see on his weekend getaway with Kathryn was her best friend, a woman constantly threatening to chop off his dick and feed it to designer dogs. Kathryn knew her friend was joking, but Ian…

“That’s it. We must have skidded off the road somewhere and died. Because we have stepped into hell.”

“What are you doing here?” Kathryn asked.

“Should be asking you that. We were here first.”

Sure enough, two more people appeared behind Eva. Her brother Henry, looking cross at the butler, and his fiancé and sub Monica, looking amused.

“Seems there has been a double booking,” the butler apologized. “Mr. Merange told me there would be guests staying in the villa this weekend. I didn’t realize they were coming separately…”

Nobody mentioned the elephant in the room… that James Merange had probably done this on purpose. For some fucked up reason.

“Bernadette will take your bags up to your room,” the butler said. A stout woman in a uniform came forward to take Ian and Kathryn’s suitcases. “You’ll be on the other end of the hall. Hopefully that will be sufficient distance for all parties involved.”