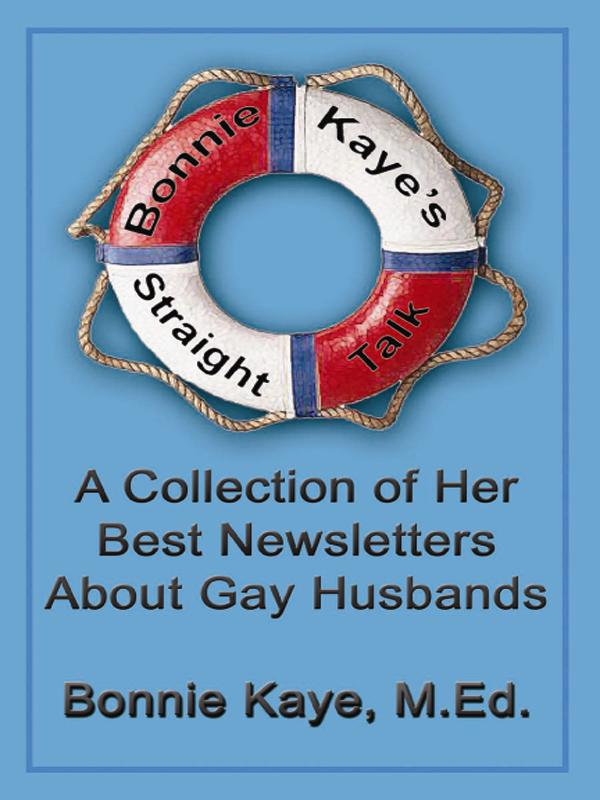 Bonnie Kaye’s Straight Talk: A Collection of Her Best Newsletters About Gay Husbands

Extreme care has been taken to ensure that all information presented in this book is accurate and up to date at the time of publishing. Neither the author nor the publisher can be held responsible for any errors or omissions. Additionally, neither is any liability assumed for damages resulting from the use of the information contained herein.

All rights reserved. No part of this publication may be reproduced, stored in a retrieval system or transmitted in any form or by any means, electronic, mechanical, photocopying, recording or otherwise without the express written permission of the publisher. Printed in the United States of America and the United Kingdom.

This book is dedicated to the thousands
of women who come to me to heal.

It is also dedicated to my wonderful family and friends
who give me unconditional support.

I also dedicate this compilation to my soul mate of nearly 15 years.
He has inspired my greatest of writing through his constant
encouragement and love.

Other books by Bonnie Kaye

The Gay Husband Checklist for Women Who Wonder

How I Made My Husband Gay: Myths About Straight Wives

PART TWO: LETTERS FROM MY WOMEN

In June of 1999, my first book, now republished as “The Gay Husband Checklist for Women Who Wonder” was published. To help promote the book, I developed my website at
www.Gayhusbands.com
offering to help women who suspect or find that they are married to gay men.

Within that year, after receiving so many positive responses to the book, I decided to write a monthly newsletter that I named “Straight Talk.” A dozen years earlier, after the end of my own marriage to a gay man, I started writing a column for a local gay newspaper which was later syndicated for eight other national gay newspapers by that same title discussing how a straight woman views the gay community. The newspaper column lasted approximately a year, and then I decided to stop because it was thwarting my own healing process by being immersed in the gay community week in and week out.

After healing, I was ready once again to help others. I believed that a newsletter addressing the issues that we all face would be valuable. And as my monthly letters from my readers continually say after seven years, the newsletter is their “lifeline.”

Each month, I addressed issues that affect straight wives and girlfriends who find themselves in a situation that is similar to Alice in Wonderland—a world of topsy turvy upside down mirrors where what is real because false and what is false becomes reality. I keep it real—I tell it as I see it—which is the only way I can explain it.

Sometimes my views have been accused of being biased. I’m told that I’m not flexible and that I only see things in black and white. I suppose I’m guilty of that. But guess what? I stand by my views. One thing you can say for me—I am consistent! That is because I refuse to give in to people who want to compromise their lives and happiness. I am not about compromise—I’m about living a happy life free of additional emotional burdens that weigh women down.

My newsletters reveal my heart and soul. They tell of my personal triumphs and defeats. I reveal my personal thoughts and personal weaknesses. I am the first to share what so many of my women feel. I try to give encouragement as they walk through the path of gay husband recovery.

Our women, now over 7,000 worldwide, love to read these newsletters not only because of what I have to say, but equally as much because they learn so much from my readers who write in every month with their experiences. I have included some of those letters in the second part of the book knowing that they will also inspire you. I thank my readers for sharing their innermost thoughts with my other readers.

I hope this book will be your guide in the days, months, and years ahead. This is a book to help you heal and to validate all of your thinking and suffering. I like to always add stories of hope because we need to keep that word HOPE focused in front of us in order to heal.

If you would like to be added to my future newsletters, just drop me a line at
[email protected]
. I will be happy to add you to help you in your journey.

I receive several letters each week from men who are struggling to come out to their wives. I respond quickly to these men in hopes that my support and encouragement will give them the courage to be honest with their spouses. I also receive several letters each month from gay men who find my website or see my book who commend me for the work I am doing in helping people understand the complexities of straight/gay marriages.

Two months ago, I received a letter from a man who was about to become an important part of my life. Jay is an attorney in Pennsylvania. He is the first man I have ever met who can write words in a manner that clarified all of my own thoughts and feelings allowing me to conceptualize a key to the problem of straight/gay marriages that I will share with you. Jay’s sensitivity and honesty reflects what most of us would like our husbands or ex-husbands to tell us. Too few of us ever get to hear these words. I asked Jay if I could reprint some of his thoughts because I believe it validates so much of what all of us feel and need to hear. After reading his words, I am sure you will appreciate not only what he says, but also the beauty of how he says it.

Jay’s first communication to me in early February stated:

I am a gay man who was married for 23 years. My ex-wife and I have two children. I am writing to encourage you to continue the important work you are doing. I only wish that in 1996 when I finally began to come out that there had been resources such as yours to support our family through our transition.

I thanked him for his kind words, and his response was this:

I think that both men and women in these circumstances must recognize that there are no winners but there are survivors who create new ways to relate, maintain, support and redefine their family. In the process of ending my marriage, I lost my best friend and the dream we had of growing old together. Slowly, we have worked to continue to parent our children in accordance with the many values that we continue to share. There are many things I would, in retrospect have done and handled differently, but my single largest regret is that I did not deal with the secret of my sexuality while still in my marriage and in the years of counseling before divorce. So to those men who you counsel, I would urge them to give the woman they chose to love and bear children the earliest chance to deal with the truth. They probably will not have a marriage together, but they will at least have a chance of preserving the love that once brought them together with hopes and plans for a lifetime.

More words of insight kept coming as the weeks progressed. I
will highlight just a few of these pearls that will lead to my
conclusion:

I keep reminding myself of the shame that fueled my own 'denial' and kept me closeted for most of my life, however I also know the damage that secrets do to those who keep them and would like to teach that lesson to my kids as well.

…my kids have always been a priority. I can recall vividly, my own frustration at seeking advice on how to come out to my kids and finding little support from the gay or straight communities. Of course, I was looking for the right way to do it and assure that the kids would not go off the deep end or reject me. No one could have given me the surefire approach. However, I think there is a real void. God knows there are self help books out there on everything else.

No woman deserves to be in this situation. In the past, I spent a lot of time searching my own soul, trying to figure out how much of the failure of my marriage was attributable to homosexuality and how much was the struggle for control, neediness and other dynamics extant in any couple relationship. My ex-wife and I hurt each other a lot. There are still things about her that I dislike, but I have concluded that the presence of my secret in that relationship was the primary poison. Much of the rest of our conflicts flowed from it....the absence of trust, the neediness, possessiveness, the anger and ultimately the conflict that I both created (even if it was not by premeditated design) and used to find the impetus despair and courage to leave. Accordingly, as painful as it is to admit, I know that the secret and immutability of my homosexuality is inextricably bound up in all that was wrong in our relationship. Yes, I had difficult issues to confront. As with any person facing difficult times, some of them I handled quite poorly. I could empathize with your own horror and dismay at how you thought and acted at various points.

I share your belief that bisexuality is often a transitional label and crutch used by homosexuals unable or unwilling to come to terms with their natural orientation. I lived that myself. After my separation from my wife, I woke one morning after a date with a woman and was appalled by the self discovery that I might do this to another woman because I hated who and how I was.

1635: Music and Murder by David Carrico
The Significant by Kyra Anderson
Hunted by Riley Clifford
Lady Adventuress 01 - His Wayward Duchess by Daphne du Bois
Dead Man's Rule by Rick Acker
The Lucifer Code by Michael Cordy
The Warder’s Leprechaun by Viola Grace
The Magus by John Fowles
The Amphiblets by Oghenegweke, Helen
Carlota by Scott O'Dell
Our partner