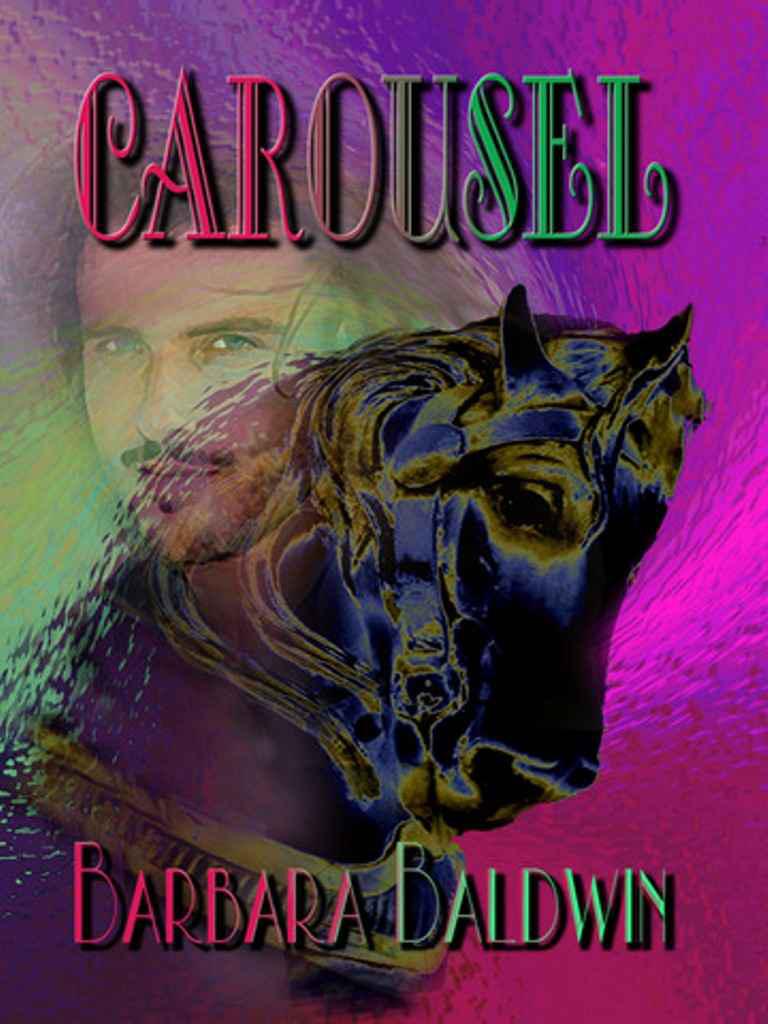 Jaci Eastman is inadvertently drawn through time to 1874 when she photographs a restored carousel. She lands at Wildwood horse farm and must rely on the good graces of its owner, Nicholas Westbrooke. Nicholas is a man who likes routine, but Jaci unwittingly shatters his illusions about women, passion and love. She tells stories of flying machines and teaches science to his niece. She's outrageous in her dress, manners and language, and yet he finds her irresistible. Jaci has always believed only reality can be photographed. But then she falls in love with Nicholas. When he begins carving the exact horse that transported her through time, will she use it to return to the present, or stay and create a new reality?

Barb loves to travel and explore new places and each of her novels is set in a different locale. She has written practically all her life, beginning with journals of family vacations. She is now published in poetry, short stories, essays, magazine articles, teacher resource materials, and full-length fiction. She also wrote and co-produced a documentary on Kansas history that won state and national awards. She has an MA in Communication, has taught at the college level and has made over 100 presentations at state and national conferences. Barb can be reached at [email protected] or through her website at www.authorsden.com/barbarajbaldwin. 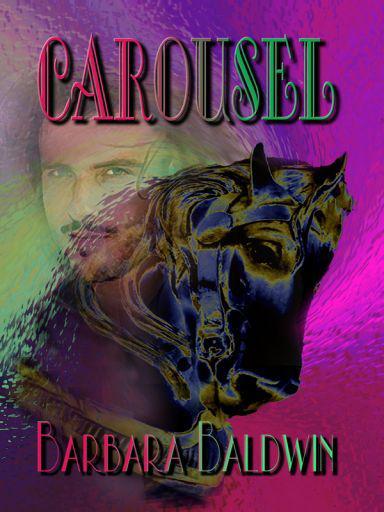 From afar, she heard the music,

A slow waltz from another time.

And the horses danced to the tune

They could not hear.

The carousel turned round and round,

And magic wove a wondrous spell

Through the silvery night.

Chasing mystic sounds to the past.

Seeking a world of fantasy,

They lured her through time.

Yet when the music ended,

And the horses finally stopped,

The magic still coursed through her,

Love had found her heart.

"Damn!" Jaci let the expletive escape without thought as she scrutinized the negatives in her darkroom. Positive her camera lens had been clean and the film fresh, she developed several prints to determine the problem. No matter in which position she had taken the photos, an image existed behind the black carousel horse. Although faint, the figure appeared to be a man, dressed darkly and with dark features.

She called Mackey, the carousel operator, and arranged a meeting the next morning. When she showed him the pictures, he shook his head, reiterating what she knew--no one had been around when she took the pictures. Anxious to get on with her assignment, she shot several rolls of film, making sure the black lead horse appeared in some, but not all, of the photographs of the restored Dentzel carousel.

"For Pete's sake." This time when she developed the film, the man's image appeared much more distinct. Jaci studied the proof sheets under a magnifier, chose several and made enlargements. Gray eyes seemed to mock her, as though defying her to find the source of the problem. Yet in another photo, shadows surfaced; dark brows bunched over haunted eyes. Jaci had spent most of her twenty-six years studying people, if not interacting with them, and she felt this man's pain.

She grabbed the photos and closed the door to the darkroom.

"Mandy, take a look at these." She tossed the photos on the coffee table in front of her younger sister. Logically, she knew there had to be a problem with her camera. She would just have to narrow down the options.

"Now?" Mandy peered over the top of a dog-eared romance novel. Sliding her glasses up the bridge of her nose, she frowned.

"Now." Jaci's command received a big sigh, but Mandy did pick up the prints.

"The horses are very nice, Sis, but the good looking hunk in the background is sort of out of focus."

"There is no good looking hunk."

There was no
body
; man, boy or otherwise. "I must have a smudge on my lens." As she talked, Jaci stuck her head under the coffee table in search of her tennis shoes.

For the moment ignoring her sister, she shoved her feet into her shoes and jerked at the laces. She didn't even know why she had asked Mandy's opinion. Her younger sister was a hopeless romantic and would find a handsome man in the middle of any photograph, even if Jaci knew better.

She stopped to look at Mandy when her sister heaved the
big sigh.
Mandy had schooled her face in a serious expression, turning wide eyes to Jaci and allowing yet another sigh to escape.

Jaci pulled on a hooded sweatshirt. She flipped the hood off her head and ran her fingers through her short blonde bob, making a face as she headed for the door. "I will not fall for your theatrics."

"Fine, be that way," Mandy replied. "Why did you ask me to look at them if you won't listen when I have something to say?"

Mandy bent over and retrieved the photos from the table. After studying them for several seconds, she grinned. "My theory? How's this? There's no doubt this man is a hunk. Judging by his clothes, I'd say he's actually a gentleman from another era."

Jaci rolled her eyes at the explanation even as she wondered why she hadn't noticed the difference in the clothes.

Mandy hurried on. "He looks
very
unhappy. Perhaps he's lost his lady love, and must spend all eternity floating around trying to find her. Or maybe he's finally located her, and is making his presence known before he sweeps her off her feet and carries her away to his manor." Mandy hugged a pillow as she pretended to swoon, giving one last dramatic sigh. "They will, of course, live happily ever after."

"Good God, Amanda Elizabeth Eastman! That tops anything you have ever said. Are you trying to tell me I took a picture of a
ghost?
" Why had she thought Mandy would be serious? Jaci didn't even wait for an answer. She slammed out the door, trotted down the steps and out into the night.

Running would clear her mind, and she now wished she had kept to her regular workouts for the past weeks. The time alone in the quiet night seemed a precious commodity. As much as she loved her sister, she could be a trial.

Unlike Mandy, Jaci felt love and romance were fairy tales for children and had no place in her life. While Mandy was a dreamer, Jaci often stated if she couldn't photograph it, it didn't exist.

She sucked in a lungful of crisp night air and slowly exhaled, hoping at the same time to expel the doubts from her mind. But tonight it didn't work. The further and faster she ran, the more his image came to mind--dark features, strong hands wrapped around the center pole of the carousel horse, or was it a cane? And his eyes--shimmering silver beckoned her; begged her for something. Understanding? Help? What did he want?

The strenuous exercise of her body did nothing to eliminate the confusion in her mind. The only resolution was to start again at the beginning.

Jaci rose the next morning determined to exorcise whatever gremlin existed with her work. Knowing the fall weather in Texas, she dressed in layers, figuring she could peel off garments as it warmed up. She pulled on worn blue jeans over Lycra running shorts and grabbed a sweatshirt to wear over her tank top. She never consciously thought about her clothes, and being a freelance photographer, she dressed as she pleased. According to Mandy, that was exactly the reason she never had any dates.

"No pizzazz to your dress," Mandy would say.

Jaci looked at herself in the mirror as she brushed her teeth. "Whatcha mean, no pizzazz?" She made a face. What could possibly be wrong with a sweatshirt emblazoned with the words
Photographers do it better in dark rooms?

She grinned. Who was she kidding? She had no desire to date and perhaps she dressed to deliberately ward off proposals.

"Yeah, right," she told her reflection. "Like you've had so many of them." She snapped on her fanny pack, putting an end to her inner conversation.

In less than half an hour, she punched the lock on her car and headed for the carousel. She had chosen to arrive later today when the ride was full of people. Setting her camera on a tripod, she softly whistled to the tune of the Wurlitzer. Mackey was already taking tickets and helping youngsters aboard the brightly painted horses and menagerie animals.

Tucking her hair under a cabby hat to keep it out of her eyes, Jaci adjusted the focus, then turned the timer to automatic so she could study the carved animals as they slowly revolved. She tried to imagine the Dentzel carousel before the turn of the century, in the heydays of amusement parks and county fairs. Prancers and jumpers would have carried laughing children round and round to the tune of a pipe organ. The carved and painted frieze edging the upper facade of the carousel was as ornate as the horses themselves. Even the kiosk, the part containing the operating equipment, was encrusted with carved figures and scenery panels.

Any artist would be in awe of the craftsmanship of this bygone era. But like too much of America's history, the original carousels had practically disappeared before anyone became concerned. Jaci Eastman was pleased her name would accompany pictures of the restored Dentzel for
Life
magazine. Her photo essay would remind people of an artistry which only exists in our modern world as a part of the past.

She reloaded her camera, keeping an eye on the ride. Round and round--speed up--slow down--stop. All riders off. New riders on--round and round again.

Nowhere did she see anything, or anyone, remotely resembling the image in her photographs. Perhaps he wasn't here today, although why he had appeared for the last two days, she couldn't say.

"Oh, lord, I sound like Mandy," she chastised herself. She couldn't believe she was thinking of the blur on her negatives as a real person. Quickly adjusting the camera, she watched the riders debark.

While the carousel cleared, Mackey stood in the middle, smiling and waving at the youngsters as they happily begged their parents for another ride. Suddenly, he clutched his chest and doubled over.

Yelling, Jaci raced to the carousel, which Mackey had set in motion as he fell. She jumped onto the moving platform and tried to make her way to where he had fallen within the kiosk. Holding to reins or pommels, she zigzagged in and out of the horses as they moved up and down.

Feeling intensely dizzy, she stopped for a moment to clear her head. She grabbed the cool, wooden mane of the black horse, closing her eyes to clear her vision. An intense electric shock raced up her arm, paralyzing her motion. She felt the carousel spin faster and faster, the motion throwing her against the horse. She moaned, knowing she was going to be sick. She clutched at the horse's neck, but that didn't prevent her from falling.

Shrill whinnies brought Nicholas and his trainer, MacAdoo, on a dead run from the side of the barn to the exercise arena. Sam, the stable boy, running from the opposite direction, collided with Nicholas as they both rounded the corner. MacAdoo, though older, surged ahead to locate the problem while Nicholas tried to untangle himself from the gangly youth.