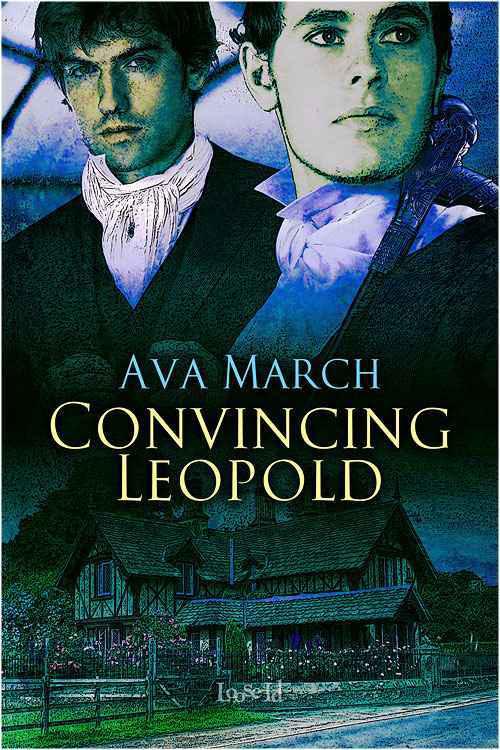 To
Mandi
and Sophia.

The
click
of a lock sliding home echoed in the study. More than a hint of reticence seeped into Arthur Barrington’s gut. Trying to push it back, he briefly closed his eyes, but the effort proved in vain.

He tamped down the weary sigh that threatened to expand his chest and poured a second cup of tea, then placed the squat porcelain teapot back onto the silver tray. A glass of brandy might better serve to revive his spirits, but he did not want to risk encouraging his lover, Leopold Thornton. To Arthur’s knowledge, Thorn had not touched a glass or bottle of liquor since three months ago when Arthur had pulled that bottle of gin from Thorn’s shaking hand. And he wanted to keep it that way.

But perhaps Thorn locked the study door only out of habit? He certainly had very good cause of late to turn the lock whenever they were alone together in a room. Or perhaps he was exercising caution? Thorn was well aware of Arthur’s reluctance to share even so little as a chaste kiss except behind not simply a closed door but a locked one. Even if Thorn’s plan for the remainder of the evening involved nothing more than conversation, Arthur wouldn’t want to leave Thorn’s town house without a kiss good night.

Yes, that could be it. Not fifteen minutes ago, he had told Thorn over supper about his trying day at the office. Thorn had even remarked that he appeared worn out.

Reassured, he picked up the two teacups and turned from the cabinet situated along the wall. With a wicked glint in his gray eyes that Arthur recognized all too well, Thorn stepped from the closed door.

So much for his hopes that Thorn had anything benign on his mind tonight.

He didn’t fight to hold back the sigh. Quite the opposite. A part of him hoped Thorn would pick up on the hint.

The expectant smile pulling the corners of Thorn’s full lips dimmed a fraction. The barest of hesitations hitched his long, loose stride.

“Thank you,” Thorn murmured, stopping at his side to take the proffered cup.

Arthur tipped his head. They stared at each other for a moment as a debate raged inside of him. Damnation, he was tired. He just wanted to relax and spend time with Thorn. To simply be with him. But how did one say “no, thank you” to a lover intent on seduction? Thorn did not deal with rejection well, and that was putting it mildly.

The intensity of Thorn’s gaze, so filled with love and devotion, settled the matter for him.

Arthur forced his legs to take him past the navy wingback chair. His back hadn’t even touched the couch when Thorn sat next to him, so close his thigh grazed Arthur’s. Awareness pricked the skin beneath his trousers, but the lethargy weighing down his shoulders quickly dampened the tingle of desire before it could pool in his groin. Yet no doubt within a handful of minutes, his lover would have the matter well in hand. Literally. And Arthur would leave the town house ten times more exhausted than when he’d entered it.

He took a sip of tea to cover his heavy sigh and contemplated the fire in the gray marble hearth. The heat from the steady flames easily reached the couch, seeping through his trousers to warm his shins. A potent lure to give in and let his eyelids drift closed, but he refused to allow himself to deliver that insult to Thorn.

When he and Thorn had first arrived back in London from their short holiday at Thorn’s country estate in Yorkshire, there had been quiet evenings interspersed with the more…vigorous ones. When he could simply enjoy Thorn’s company. The perfect balance of searing passion and comfortable companionship. So perfect, in fact, they had reduced those lingering worries to mere nothingness. Yet lately when he met Thorn in the evenings, all the man wanted was sex. Even when in view of Thorn’s servants, the heavy undercurrent rode behind his lover’s every word, every glance, every discreetly cloaked touch.

You’re a damn prude for complaining about it.

Yes, indeed. His lover was a beautiful man—all lean, graceful lines and with flawless pale skin that begged to be kissed. A man who could suck an orgasm right out of him. Who didn’t have a single qualm about putting that sinful mouth on the most…well, sinful places on Arthur’s body. And who wanted to be with
him
, and only him.

That last bit still had the power to astound Arthur.

But why couldn’t they spend the evening together every now and then and not have it be about sex?

“Supper was quite nice,” Arthur said in an effort to pull his mind from his worries. “Please extend my thanks to your cook.”

Porcelain clinked against porcelain as Thorn set his cup and saucer on the floor. A hard shoulder brushed against Arthur’s as Thorn shifted, turning his upper body toward him. A hand settled on Arthur’s thigh. Long, elegant fingers which had never seen a day of honest work kneaded his muscles. Adept and gentle, approaching a soothing massage, yet Thorn’s intention could not be any clearer.

“You seem tense.” A chunk of Thorn’s wavy black forelock hung over one eye, the ends just skimming his long lashes, but it couldn’t hide the concern that touched his gaze.

“As I mentioned earlier, I had a long day at the office. Didn’t get as much done as I hoped.”

“No. Not today. Fenton needed assistance drafting a will. Took an ungodly amount of time.” The new secretary would be the death of him. The young man was supposed to help take some of the burden off Arthur’s desk. Likely would eventually, but given Arthur had hired him a month ago, he still needed a considerable amount of assistance. And since his other secretary didn’t do much more than keep Arthur on schedule and organize the office, Fenton needed the sort of assistance only Arthur could provide.

Thorn’s lips thinned into a compressed line. Then that thoroughly wicked smile tipped the edges once again. He leaned closer. Warm breaths fanned Arthur’s ear. Slow and enticing, sensation rippled down his spine.

“Well then, let me help you to relax.”

The promise of sinful pleasures soaked Thorn’s voice, melting Arthur’s resistance as only this man could. The tingle of desire sparked anew: stronger, hotter, sharper than before, enough to temporarily mask the weariness. He did not put up a fight when Thorn pulled his teacup from his grasp, setting it on the floor next to Thorn’s cup.

Within the blink of an eye, the long length of Thorn’s body pressed against his side. Elegant fingers coasted up from Arthur’s knee, not pausing once on their way to their target. With unerring accuracy, Thorn located Arthur’s prick beneath the placket of his trousers and stroked the length.

He rested his chin on Arthur’s shoulder as his hand did wonders to coax Arthur’s cock to attention. He swiped his fingers over the crown, then went back to pumping the length, his palm swooshing softly over the fabric. Seeking more, Arthur spread his legs and pushed up into that wonderfully firm grip.