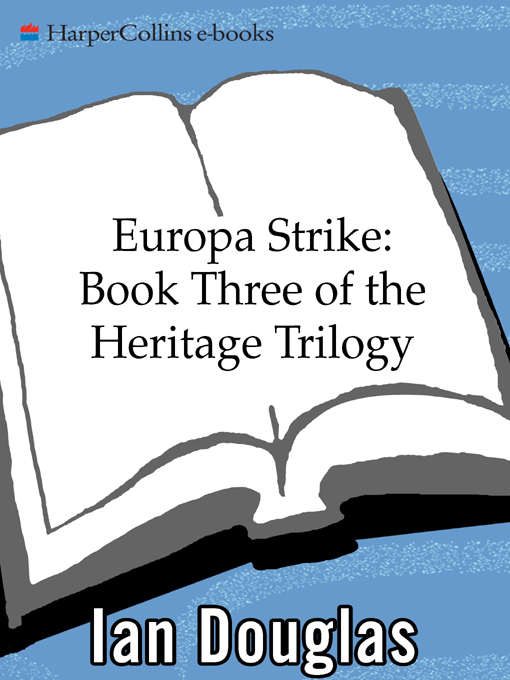 For Dave Plottel, who helped with the numbers; for
Heather Foutz, research assistant and first editor, par
excellence; and, as always, for Nina.

Prologue
The sounds of celebrationâthe bang and snap of firecrackers,â¦

Two
The sign above the place on Highway One, just outsideâ¦

Three
Why, Colonel Kaitlin Garroway asked herself, do I come toâ¦

Four
Major Jeff Warhurst made his way along the narrow accessâ¦

Seven
By the second half of the twenty-first century, there wasâ¦

Nine
Major Jeff Warhurst looked up from his desk as theâ¦

Eleven
The refueling was almost complete.

Twelve
Descending Thunder No. 4 bucked and kicked as the pilotâ¦

Thirteen
Jeff Warhurst was linked in.

Fourteen
Jeff had designated a small room off of the compartmentâ¦

Fifteen
Jeff shook his head sadly. “What the hell were youâ¦

Sixteen
“So,” Jeff said with a wry grin. “Is this wonderâ¦

Nineteen
“Gentlemen, it's about damned time we took this fight toâ¦

Twenty
The Mantas rested side by side, their tapering aft sectionsâ¦

Twenty-One
The city illuminated the night, holding it at bay withâ¦

Twenty-Two
“Hold it!” Hastings said. “I'm getting something!”

Twenty-Three
Two of the Chinese assault troops were down, fist-sized holesâ¦

Epilogue
Major Jack Ramsey looked up at Dr. Alexander. “What did youâ¦

Other Books by Ian Douglas

The sounds of celebrationâthe bang and snap of firecrackers, the cheers of the crowd, the rattle and throb of drumsârose from the street, hammering at the broad window overlooking the mob-packed Dongchan'an Jie. Dr. Zhao Hsiang sipped green tea from a porcelain cup and watched the festivities a moment. A huge dragon was snaking through the throng almost directly below the office window, making its sinuous way on dozens of human legs along the block midway between the southern gates of Tiananmen Square and the burned-out ruin of the old McDonald's restaurant.

Zhao sighed. Great
Zhongguo
reunited at last. China, the Middle Kingdom, a major power once more. It would have been politic for Zhao to have joined the revelers, to have attended, perhaps, the ongoing parties at Tiananmen Square and the Hall of the Revolution in order to be seen by the Authorities celebrating the end of the Great Division, but he'd been too excited by this new insight. He had to knowâ¦
had
to. There would be time for parties later, once the results of his discovery had been confirmed and published.

“The simulation you requested is ready, Doctor,” a cool, male voice said in singsong Mandarin. The voice's source was the IBM KR4040 on his deskâarchaic technology by global standards, but the best available for the Bureau.

“
XiÃ¨xie
,” Zhao said, thanking his secretary. Turning, he set the cup down on a table by the window, walked across to his desk, and seated himself in the power chair, which lowered its back as he stretched against it. Taking a trio of colored leads, he began plugging inâ¦the red in the socket behind his left ear, the green at the base of his neck close by the Atlas vertebra, and the white into the nerve plexus on the inside of his right wrist. “I am ready,” he said, enunciating the words carefully. “Safeword
ting-zi
. Run program.”

A crackle of static snapped somewhere in the back of his brain, and his vision winked out in a white fuzz of electronic snow. As with the Bureau's computers, the virtual reality interfaces available to the researchers were not the most up to date, and the transition to cyberspace was always a bit disconcerting.

But they served. The static faded, replaced by a ghostly black emptiness, with a faint, blue-green glow in the depths below. He was adrift in an ocean and at a considerable depth. Lishu phonograms and numbers scrolled past the right side of his visual field, giving figures for depth, temperature, pressure, salinity, and other factors of the deep ocean.

The illusion was perfect, or nearly so. The data jacks surgically implanted in his skull allowed incoming data to override his normal processing circuitry, replacing what he saw and heard with records residing within the IBM's fifty terabytes of storage.

He scarcely noticed the visual feed, however, for as soon as he linked in, his ears were filled with the deep and sonorous ululation of the Singer. Eerie, lonely, moving, the enigmatic voice trilled, moaned, and slid across alien scales, weaving intricate melodies the human ear had trouble grasping.

“Time compression,” he told the secretary. “Factor one to ten thousand. Compensate for my hearing range.”

The Songâhow like the songs of Earth's vanished great whales!âchanged in character, pitch, and tone. Now, with the pace of the sound vastly slowed, he could hear rich, new variations, chirps and warbles and keenings his brain had been too slow to hear before. Zhao listened and marveled. There could be universes of meaning in those shifting, sliding, singsong tones. What, he wondered, was it saying?

The Singer's benthic hymn was gloriously beautiful, with melodies and tonalities alien to Chinese earsâ¦or to Western, for that matter. There could be no possibility that the music, or the message it carried, had anything, to do with Earth or humankind. The ocean within which Zhao was now virtually adrift was over six hundred million kilometers removed from any of Earth's abyssal depths. The sounds filling the black depths around him were being generated byâ¦by
something
deep beneath the surface of Europa's global, ice-sheathed ocean.

It was the nature of that something that he was testing now.

“Give me a countdown to the start of the next ping,” Zhao said.

To Zhao's senses, he seemed to be descending rapidly, though he still felt only the synthleather of the chair pressing at his back, not the cold, wet rush of the sea streaming past his face. That was just as well; the ambient water temperature was slightly below zero; its freezing point had been lowered slightly by its witch's brew of sulfur compounds and salts. Even with Europa's scant gravity,.13 of Earth's, the pressure at this depth amounted to over a thousand atmospheresâsomething like 1,058 kilos pressing down on every square centimeter of his body, if his body had actually been plunging through the Europan depths.

The light seemed to be growing brighter, and he was beginning to make out the fuzzy forms of walls, towers, domesâ¦

The image was not being transferred by light in this lightless abyss, of course, but by sound. The Song itself, echoing repeatedly from the surface ice around and around the Jovian satellite, reflected from those curiously shaped alien architectures. Microphones at the surface retrieved those reflections, and advanced imaging AIs created a rough and low-resolution image of what human eyes might have seen, if in fact they were suspended a mere few hundred meters above the object and not nearly seventy-eight kilometers. The object was twelve kilometers across, roughly disk shaped, but with myriad swellings, blisters, domes, and towers that gave it the look of a small city. Experts were still divided over whether it was an underwater city, built for some inscrutable purpose deep within the Europan ocean, or a titanic spacecraft, a vessel from Outside that had crashed and sunk here thousands of years agoâ¦or more. So far, the evidence seemed to support the spacecraft hypothesis. The thing couldn't be native; Europa was a small world of ice and water over a shriveled, stony core, incapable of supporting any sort of technic civilization. The Singer had to be a visitor from somewhere else.

One end appeared sunken in a thickening of the darkness belowâthe point at which the sea's pressures grew so great that the water became a kind of ice-water slurry. Deeper yet was the core, where tidal flexing of the satellite in the immense tug-of-war between Jupiter and its moons had warmed the frozen world's heart, and deep sea vents spewed forth hot water and clouds of organic chemicals. There was life on Europa, thriving in the deeps near the volcanic vents. The CWS expedition had confirmed that a year ago.

But the Singer was as alien to the simple microorganisms swarming in the Europan sea as it was to humankind.

To Zhao's slowed time sense, the sonar ping sounded like the reverberation of a deep, resonant gong, the one-second pulse dragging on and on interminably, muted by the software running the simulation. He closed his virtual eyes, shutting off the glowing, sea-wavering towers, concentrating wholly on the alien song.

“There! You hear it? When the probe frequency shifts, the tonal range of the song shifts the same way. It's very subtleâ¦.”

“Too subtle for a promising analysis,” his Secretary said, speaking in his thoughts. The AI's name was Albert, for Albert Einstein, a persona it adopted when it was necessary to manifest itself in a simulation or on screen. Zhao did not share the Secretary's name with his compatriots at the Bureau, however. Things Western bore a particularly strong and unpleasant odor just now. “I cannot be certain that I hear what you believe you hearâ¦and my hearing is considerably more sensitive than yours.”

“Ah. But I hear it through
putonghuÃ
,” Zhao replied. The word meant “common speech,” the Beijing dialect, what foreigners still called Mandarin.

“Of course. Perhaps I am more sensitive to shifts of
relative
tone than are you. You have been programmed to interpret tonal shifts in speaking the language. I have grown up with it.”

“Perhaps, though I fail to see the difference in the two.” Albert did not sound convinced, though it was always risky reading emotion of any kind into the AI's words. Most of his coworkers thought of AIs as completely lacking in emotion or feeling, but Zhao knew better.

“There is no question about it!” Zhao said. For the first time, he was beginning to allow himself to be excited. “The Singer is responding in realtime to the sonar signals transmitted from the surface. Do you realize what this means?”

“If true,” Albert replied, “it means that the Singer is not a recording or automatic beacon of some sort, as current theory suggests, but represents an active intelligence.”

“It means,” Zhao said, excited, “a chance for
first contactâ¦.
”

“It is likely that the CWS expedition has precisely that in mind. The Americans' sudden interest in submarines designed for extreme high-pressure operations suggest that they plan to visit the Singer in person.”

And that, Zhao thought, could well be a disaster for China.

“We will have to inform General Xiang, of course,” Albert reminded him. “With the current political situation, the Americans are unlikely to grant us access to this find.”

It was imperative that Great
Zhongguo
be the first to make face-to-face contact with alien visitors from Beyond. The nation's survivalâas a world power, as a
technological
powerâdepended on it. China's population, now approaching three billion, could not be sustained by the capricious handouts of foreign governments.

And so, China would go to Europa to meet for themselves these song-weaving visitors from the stars.

First, though, the Americans and their puppets would have to be taken out of the way.

Happy Ever After by Janey Louise Jones
After the Storm by Sangeeta Bhargava
The Sun and the Moon: The Remarkable True Account of Hoaxers, Showmen, Dueling Journalists, and Lunar Man-Bats in Nineteenth-Century New York by Goodman, Matthew
Emily Feather and the Chest of Charms by Holly Webb
Across The Universe With A Giant Housecat (The Blue) by Void, Stephanie
Debt-Free Forever by Gail Vaz-Oxlade
On Becoming His - Lessons Learned by Dayne, Cassandre
Boy Meets Boy by David Levithan
Down the Bunny Hole by Leona D. Reish
Nova: A Scifi Alien Romance (Rebel Lords) by Kylie Gold
Our partner