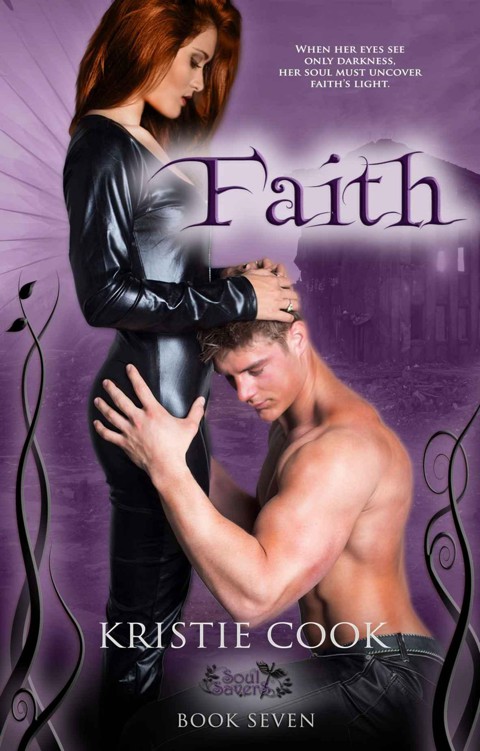 When her eyes see only darkness, her soul must uncover faith’s light.

Evil reigns the world. Earth’s been ravaged. Only supernaturals roam the surface, while
anyone else who escaped the fallout remains hidden deeply underground. The only signs humans survived at all come from
those who serve the Daemoni. To finalize his conquest of humanity, Lucas prepares to rip down the veil between Earth and
the Otherworld, opening the gates of Hell into the physical realm.

So why do the Angels insist on Alexis fighting a war that’s already been lost? Defending a
world that no longer exists?

With a soul that’s been battered and beaten by both Heaven and Hell, Alexis holds on to a
single conviction—her love for her family. Her only mission now is to save her husband’s and her son’s
souls. Once she does, she’ll plead with the Angels to allow them off this world God has obviously forsaken.

But has He? And can she give up on her people so easily? On the souls of all humanity? Or will
she find the faith she needs to defeat the Daemoni and win back the world? Just how far will she go to save the souls
she loves . . . and those she does not?

This epic finale of the bestselling Soul Savers Series will break readers’ hearts, put them
back together, and leave them demanding more.

— The Book of Phoenix Series —

Except as permitted under the U.S. Copyright Act of 1976, no part of this publication may be
reproduced, stored in a retrieval system, or transmitted in any form or by any means, electronic, mechanical,
photocopying, recording, or otherwise, without written permission of the copyright owner.

Please do not participate in or encourage piracy of copyrighted
materials in violation of the author’s rights. Purchase only
authorized editions.

This book is a work of fiction. Names, characters and events are
either products of the author’s imagination or are used
fictitiously and any resemblance to actual persons, living or dead,
is entirely coincidental.

As the
world destructed upon itself, the last thing I wanted to be doing was
staring into the black abyss of a Demon’s eye. Yet, here I was,
standing on the marble steps of the Thomas Jefferson Memorial doing
just that, while bombs exploded throughout the city and chunks of
black ice crashed into the ground, transporting more Demons into this
realm. Along with the ice came a rain of fire, igniting the dry,
autumn landscape, creating an orange glow in the night sky that added
to the imagery of Hell that Lucas had brought to Earth.

The only thing I
did
want to be doing at this moment was to be holding my wife and son, or
better yet, sweeping them off to safety. But first, I had to finish
off this last son of a bitch who blocked my way to the rotunda above.
The first few Demons had given me quite the beating, but I learned
with each one, and had sent six, so far, chasing after their heads.

Seven had always been
my lucky number. If I believed in such a thing.

I watched the Demon’s
horned head as its membranous wings beat at the air and its barbed
tail swished to and fro, while I calculated its next move. Its green
and yellow dappled skin seemed to undulate like a separate being with
each movement, creating a distraction for the inexperienced. But I
focused on its obsidian eyes. And when it glanced to my left, I knew
it would actually go right, so I feigned that way too. Then I ducked
and weaved to its left. I swung my right foot up. My boot slammed
into its lizard-like nose, shoving its face into its head with the
spurting sound of air being forced out of gelatin.

Its thick neck twisted,
and a fang jutting out of its jaw hooked into my boot. When it gave a
shake of its head, as though trying to throw its face back into
place, it jerked me off the ground. I flew into the air, bits of
black matter from its head flying with me. I flipped in midair and
landed on my feet three steps above the Demon. At least I headed in
the right direction.

The Demon let out a
screeching, wheezing sound through its smashed nose and mouth, and
then it dove at me. Its sharp claws lashed out at my face, and I
arched backward out of its reach. Then I sprang back on my hands and
launched myself upward, feet first. My thick-soled boots plowed into
its barrel chest. The force should have sent it tumbling away, but
the powerful beast barely budged a few feet before its wings caught
the air. It hung there for a moment, screaming evil curses in the old
language as its eyes bulged from the pressure of its crushed nose.

I glanced at the
portico only a dozen steps above me now, straining to listen for
heartbeats while trying not to draw the Demon’s attention in
that direction. I’d heard Alexis screaming what must have been
hours ago, but she’d been quiet since, and I hoped she’d
been hiding somewhere safe with Dorian. Hiding wasn’t like her,
not for this long, but I had to hope. I could hear nothing, though,
over the squawk of the Demon.

Almost there, my
love. Almost there.
Her telepathy had become unreliable, so
I
prayed that she even heard my thoughts.

While sliding a
shuriken from a hidden pocket inside my jacket’s sleeve, I
refocused on the shrieking Demon, analyzing it again so I could seize
the perfect opportunity. Since they had no hearts, even their bodies
weren’t permanently physical, my killing power had no effect on
these creatures straight from the depths of Hell. Every time I tried
to paralyze them, they broke free in seconds with powerful black
magic. The Ancients had once divulged to me, during my previous life
when I was their pet, that most Demons were too simple-minded to use
the powers they possessed. They preferred the thrill of a physical
brawl.

Which was fortunate for
me.

Because there was only
one way to decommission a Demon: decapitate it. It wouldn’t die
permanently, of course. It was a spirit of the Otherworld. But it
would have to return to that other realm, to Hell specifically, to
heal before it could take a physical form again. And decapitation
required a closeness their magic would never allow if they chose to
use it.

Shaking its deformed
head again, the Demon batted its wings, lifting it higher in the air
so it was once again above me. And that was its mistake. It probably
thought it had gained a vantage point, but instead, it exposed its
vulnerable point. At the same moment it twitched to lunge at me, I
flicked my wrist at it. It grinned for a moment, likely believing I’d
tried another of my powers on it. But the grin faded along with the
inky shine in its eyes. A moment later, the head fell from the body,
and then both parts disappeared.

My legs pumped up the
steps toward the rotunda as I shouted for my family. “Alexis!
Dorian!”

I continued calling for
them, but no answer came. Where the hell were they? Why weren’t
they responding? Panic rose and filled my voice as I yelled their
names. My heart pounded with the unfamiliar feeling of fear as I
reached the center of the portico. Only broken pillars remained, the
roof and walls gone. The statue of Thomas Jefferson, where Noah had
been magically bound, lay on its side. On a broken piece of wall,
written in what appeared to be dried blood and taking the form of
Dorian’s handwriting, were the words, “We don’t
belong with you. I have to do this. Don’t try to follow.”

Damn it!
Dorian
had taken Noah and left, possibly for the Daemoni. That must have
been what had Alexis screaming earlier. But where was she now?

My pulse raced even
faster as my eyes swept over the piles of jagged marble and stone
until they caught on something a few yards in front of me. My heart
came to a screeching halt. Locks of dark coppery hair. A pale hand. A
pool of crimson. And I could see nothing else of her under the
rubble.

“Oh, no.” A
string of profanities poured out of my mouth as I heaved a large
chunk of marble to the side. I lifted another, making my way to her
still body, my stomach dropping further with each stone I moved.
“God, no. Please no.”

I couldn’t lose
her. I couldn’t fucking lose her, damn it!

When I cleared another
boulder from the pile, my worst nightmare became reality.

The word ripped out of
my chest, taking my heart with it. “NO!”

I tossed the last two
chunks away and lurched forward, still refusing to believe what I
saw. My boots splashed in the blood and slid on the wet marble until
I crashed down next to her. My fingers automatically darted for her
wrist, but I felt no pulse. No breath warmed my fingertips against
her pale lips.

I carefully lifted her
broken body and pulled her into my lap. My arms wrapped tightly
around her, probably crushing her further as I held her against my
chest. But it didn’t matter.

Because she remained so
still. So cold. So … lifeless.

The horrific feeling
that exploded within me was unbearable. Unimaginable. Unlike anything
I’d ever felt before. I knew physical pain. From all of the
wars I’d been in, all of the suffering at the hands of Lucas
and the Daemoni Ancients, all of the times they’d tried to take
my heart but couldn’t, I knew physical pain very well. I knew
emotional pain. I knew misery and regret when my son had been taken.
I knew grief and sorrow from others’ deaths, especially Rina’s
and Sophia’s because I’d come to love them. But this …

This unfathomable
sensation inside me …

This torture of my soul
clawing and scrabbling, tearing itself apart as it searched for hers
…

I did not know this
kind of internal mutilation. I didn’t know how to handle it,
what to do with it.

Senseless words
blubbered out of me as I buried my face in her soft hair and sobbed
incoherently for my beautiful bride. For my soul mate. For the one
person who had loved me unconditionally. Who had taught me what love
felt like. Who had warmed this heart of mine that had been cold for
centuries. Whose soul had completed mine, making me whole for the
first time ever.