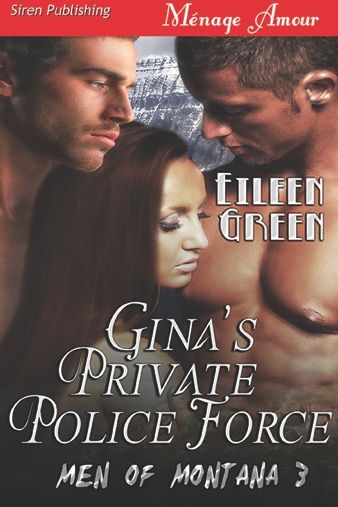 Gina Picard, the waitress that Connor Lawson and Jared Pierce have been pursuing, has a big secret. One that could have them scrambling to remove themselves from her life forever and one that could land her in prison.

Chivalry is not dead as Gina finds out when Connor and Jared stand by her while introducing her to the ménage relationship they wish to have with her. While mistrust, cynicism, and fear rule her life, she tries very hard to let these two men into her heart and mind as they make love to her and show her how much they love her.

When Gina’s past literally comes back to haunt her, she fears for the men in her life and what this could cost all of them. The men have to find out who is trying to hurt her while getting her to open herself up to them, to accept the love they have to offer her and their protection.

If you have purchased this copy of
Gina’s Private Police Force
by Eileen Green from BookStrand.com or its official distributors, thank you. Also, thank you for not sharing your copy of this book.

This is Eileen Green’s livelihood. It’s fair and simple. Please respect Ms. Green’s right to earn a living from her work.

They say you can’t choose your family. That is very true, but then there is that extended family that one does get to choose.

Mine is made up of misplaced family members, dedicated friends and the family that I hold dear to me.

To my daughters, Debz and Becca, thank you for putting up with my wild dream. I hope that you both follow your own dreams and do all you need to achieve them.

To my sister, Linda, and her daughter, Leilani, even though I didn’t meet you until we were adults, thank you for coming into our lives for you filled a spot in my life that had been missing.

And, to all my friends who encouraged me to reach for my dream even though they probably thought I was crazy, thank you. You have given me support unconditionally and helped me understand what a real family consisted of…love, laughter, moral support, and understanding.

Thank you all for accepting me, flaws and all.

Lastly, thank you to my readers who have helped me get to this wondrous time of my life, achieving my goal of becoming published. You have become a part of my chosen family whether you know it or not. So, welcome. I hope you will always enjoy my stories.

“Ten! Nine! Eight! Seven! Six! Five! Four! Three! Two! One!” the intimate group of twenty people called out as they counted down to the New Year. From a distance several small explosions sounded in the cold night, and one woman shrieked her fear at the sounds.

Colorful flashes of light exploded above the group as the fireworks lit up the sky to the “Oohs” and “Aahs” of the group save the three people who were affected by the unexpected festive display. The partygoers were separated into smaller groups sitting in lawn chairs in the beds of the pickups parked in the rounded driveway of the Circle G ranch.

Connor Lawson and Jared Pierce were now holding a shaking and embarrassed Gina in the bed of Jared’s truck. Gina was thankful for the darkness surrounding them to hide the blush that had embedded itself on her face after she realized what the explosions actually were. Each man rubbed one of her arms as they smoothed her brunette hair down her back. For the first time in her life, she felt cherished, though she knew she couldn’t let them get close to her emotions, her feelings, or her mental state. She had been on the edge since the two lawmen began to shower her with their attention and she had to find a way to divert them.

They had insisted she come to the festivities since Glen was closing up the Polson Diner early. With this being a tight-knit community, the two men felt she needed to have something to do on New Year’s Eve. They had been appalled when she told them at breakfast that morning that she was going home, having a glass of wine, and watching the colorful, lighted ball drop in Times Square on TV.

With it being the holidays, the diner was slow and Connor reached out, grabbed her wrist, and pulled her into his lap. Squealing, she squirmed and tried to get up, afraid Glen would yell at her for the antics, but Connor trapped her within his strong muscular arms, his hands clasped at her side. He refused to let her up until she agreed to come with them. Now that she was being fawned over by both men, she was unable to worm her way out of the situation, and she really wished she had followed her first instinct and stayed home.

The evening had been fun, she had to admit. There was barbecue with all the fixings even though it was the dead of winter. The dessert table was a sugar high waiting to happen, which the three small children in attendance were experiencing.

The twins, two six-year-old boys, and another boy, about three, were here with their mother, were a handful, and kept their mother busy though three of the ranch hands were helping to keep them occupied. One of the twins was a bit more standoffish with everyone, including his mother. Whenever she tried to speak with him, he harrumphed at her and stormed away. The boy was obviously upset with everyone and Gina’s heart went out to him. She was one person who understood not wanting to be involved in the festivities.

As she sat between the two virile men, she felt herself being warmed by their ministrations to calm her frayed nerves. Too many memories of the past had come back with the mini explosions of the fireworks. She had moved here to escape those memories, but it seemed as if too many day-to-day activities and even ones that should be special brought them back to haunt her. Sadness threatened to envelop her as she sat watching the bright lights fill the ink-black night sky dotted with tiny diamonds. Panic was going to ensue if she didn’t get control of it quickly.

Two large hands covered her own, one from each man, and when she tried to pull away from them, Connor leaned in close. “Darling, you have nothing to be afraid of. Just be here with us. Enjoy yourself. Let us love on you a bit.”

Swallowing hard, Gina felt tears pricking at her eyes and she blinked trying to get them to recede. She refused to cry in front of these two hunks and she refused to open herself to them. It was too dangerous for her. Perhaps she was going to have to move on.

The thought caused great sadness to well in her chest. Polson had become a home for her. No other place she had lived had ever been this friendly to her. Even those seven miserable years hadn’t brought her happiness or the friendships she had here. If she had to admit it, she even loved Glen through all his gruffness. He really was a teddy bear, she thought to herself.

The two macho lawmen sitting on each side of her reminded her of the past she was trying to escape. She feared if they really got to know her as they claimed they wanted, she would wind up living in a jail cell instead of enjoying their love.

Connor to her right slid his hand down from her hair, past her waist, and began rubbing her ass cheek through the denim she wore. His caresses were gentle, though every so often he kneaded the rounded globe she hated so much.

Concentrating on Connor’s hand, she realized Jared had slipped his hand down her arm to the front of her jeans. He had already unbuttoned the metal button and was gently lowering the zipper. Feeling self-conscious about her stomach, she sucked in a breath as his hand gained entrance between the rough material and her cotton panties.