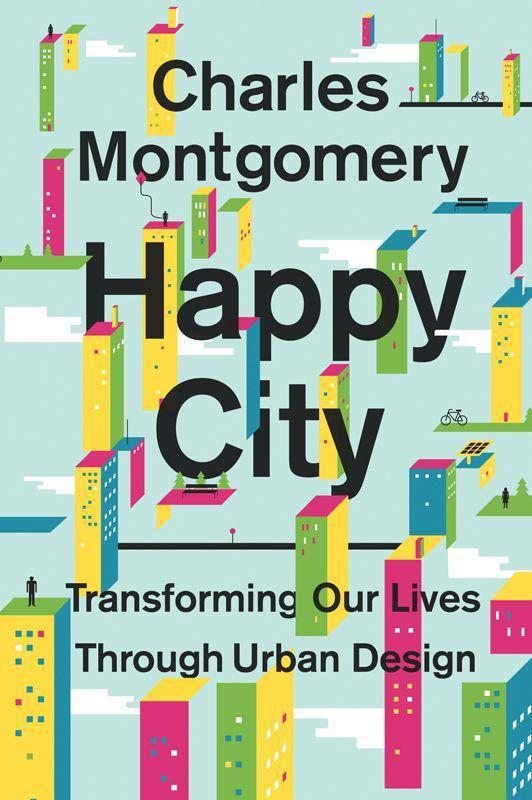 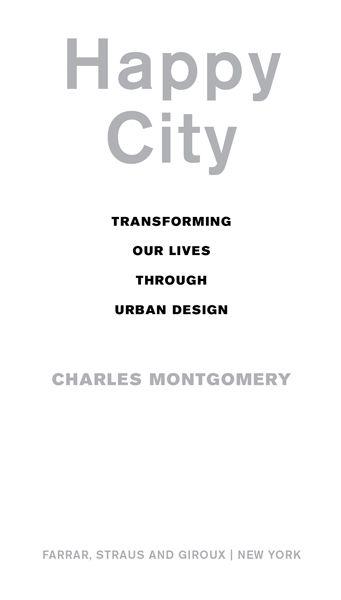 Please note that some of the links referenced in this work are no longer active.

1. The Mayor of Happy

2. The City Has Always Been a Happiness Project

8. Mobilicities I: How Moving Feels, and Why It Does Not Feel Better

13. Save Your City, Save Yourself

1. The Mayor of Happy

There is a myth, sometimes widespread, that a person need only do inner work, in order to be alive like this; that a man is entirely responsible for his own problems; and that to cure himself, he need only change himself … The fact is, a person is so far formed by his surroundings, that his state of harmony depends entirely on his harmony with his surroundings.

I chased the politician through the bowels of a dull cement office block on the edge of a twelve-lane freeway. Everything about him suggested urgency. He hollered with the hurried fervor of a preacher. He wore the kind of close-trimmed beard favored by men who don’t like to waste time shaving. He jogged through the building’s basement parking deck in a long-legged canter, like a center forward charging for a long pass.

Two bodyguards trotted behind him, their pistols jostling in holsters. There was nothing remarkable about that, given his profession—and his locale. Enrique Peñalosa was a perennial politician on yet another campaign, and this was Bogotá, a city with a spectacular reputation for kidnappings and assassination. What was unusual was this: Peñalosa didn’t climb into the armored SUV typical of most public figures in Colombia. Instead, he hopped on a knobby-tired mountain bike and quickly cranked his way up a ramp into the searing Andean sunlight. Then he was off, jumping curbs and potholes, riding one-handed, weaving across the pavement, and barking into his cell phone while his pin-striped trousers flapped in the breeze. His bodyguards, a photographer, and I all pedaled madly behind, like a throng of teenagers in the wake of a rock star.

A few years earlier, this ride would have been a radical and—in the opinion of many Bogotanos—suicidal act. If you wanted to be assaulted, asphyxiated by exhaust, or run over, Bogotá’s streets were the place to be. But now it was 2007, and Peñalosa insisted that things had changed. We would be safe. The city had gotten happier, thanks to his plan.
Happier
—that was the word he used over and over again, as though he owned it.

“Mayor! Mayor!” a few of them shouted in Spanish, though it had been six years since Peñalosa had held that job, and his campaign to regain it had barely begun. He waved back with his phone hand.

“Buenos días, hermosa!”
he said to the girls.

“Hola, amigo!”
he offered to anyone who looked his way.

There it was, the declaration I have seen bring tears to so many eyes with its promise of urban revolution and redemption.

It’s been six years since my ride with the Mayor of Happy, but the memory has remained with me, as vivid as the Andean sun. That was the day the journey began.

You may never have heard of Enrique Peñalosa. You may not have been among the crowds that gave him a hero’s welcome in New York, Los Angeles, Singapore, Lagos, or Mexico City over the last decade. You may never have seen him raise his arms like an evangelist or holler his philosophy over the noise of a hundred idling car engines. But his grand experiment and his even grander rhetoric inspire an urbanist fervor wherever he goes. Peñalosa has become one of the central figures in a movement that is changing the structure and soul of cities around the world.

I first saw Peñalosa work his rhetorical magic back in the spring of 2006. The United Nations had just announced that some day in the following months, one more child would be born in an urban hospital or a migrant would stumble into a metropolitan shantytown, and from that moment on, more than half the world’s people would be living in cities. Hundreds of millions more were on their way. By 2030 almost five billion of us will be urban. That spring, Habitat, the UN’s agency for human settlements, called thousands of mayors, engineers, bureaucrats, and do-gooders together for the World Urban Forum. The delegates met in a harborside convention center in Vancouver to figure out how to save the world’s exploding cities from disaster.

The world had little inkling of the great recession slouching on the horizon, yet the prognosis was bleak. The problem? On the one hand, cities were pumping out most of the world’s pollution and 80 percent of humanity’s greenhouse gas emissions. On the other, all predictions suggested that cities were going to be slammed by the effects of climate change, from heat waves and water scarcity to waves of migrants running from droughts, floods, and water wars. The experts agreed that cities would bear more than three-quarters of the cost of adapting to global warming. They would be short on energy, tax revenue, and jobs. There seemed to be no way they were going to be able to help citizens meet the goals of security and prosperity that urbanization had always seemed to promise. The gathering was sobering.

But the mood changed when Peñalosa took the podium. He told the mayors that there was hope, that the great migration was not a threat—no!—it was a tremendous opportunity to reinvent urban life. As poor cities doubled or tripled in size, they could avoid the mistakes that rich cities had made. They could offer their citizens lives that were better, stronger, freer, and more joyful than those offered by most cities of the day. But to accomplish this, they would have to completely rethink their beliefs about what cities are for. They would have to let go of a century of thought about city building. They would have to let go of some of their dreams.

To make his point, Peñalosa told a story.

Toward the end of the twentieth century, Bogotá had become a truly horrible place to live—one of the very worst on earth. Overwhelmed with refugees; seared by a decades-old civil war and sporadic terrorism in the form of grenades and firebombs (deadly “explosive potatoes” being the most common means of attack); and hobbled by traffic, pollution, poverty, and dysfunction, the Colombian capital was regarded both at home and abroad as a living hell.

When Peñalosa ran for the mayor’s seat back in 1997, he refused to make the promises doled out by so many politicians. He was not going to make everyone richer. Forget the dream of becoming as wealthy as Americans: it would take generations to catch up to the gringos, even if the urban economy caught fire and burned blue for a century. The dream of riches, Peñalosa complained, served only to make Bogotans feel bad.

“If we defined our success just in terms of income per capita, we would have to accept ourselves as second- or third-rate societies—as a bunch of
losers
,” he said. No, the city needed a new goal. Peñalosa promised neither a car in every garage nor a socialist revolution. His promise was simple. He was going to make Bogotans happier.

“And what are our needs for happiness?” he asked. “We need to walk, just as birds need to fly. We need to be around other people. We need beauty. We need contact with nature. And most of all, we need not to be excluded. We need to feel some sort of equality.”

Ironically, in giving up the chase for the American dream, Peñalosa was invoking a goal set out in the American Constitution: by pursuing a different kind of happiness, Bogotans, despite their relatively meager paychecks, really could beat the gringos.

These days, the world is not lacking for happiness gurus. Some insist that spiritual practice is the answer. Others tell us that we must simply ask the universe for prosperity, that we can get closer to God by getting richer, and get richer by inching closer to God. But Peñalosa did not call for mass counseling or religious indoctrination or state-funded courses in positive psychology. He did not preach the law of attraction or the tenets of transformative wealth. This was a gospel of transformative urbanism. The city itself could be a device for happiness. Life could be improved, even amid economic doldrums, by changing the shapes and systems that defined urban existence.

Peñalosa attributed an almost transcendent power to a certain kind of urbanity. “Most things that people buy in stores give them a lot of satisfaction the moment they buy them,” Peñalosa told me. “But after a few days, that satisfaction decreases, and months later, it completely melts away. But great public space is a kind of magical good. It never ceases to yield happiness. It’s almost happiness itself.” The humble sidewalk, the park, the bike path, and the bus were suddenly elevated to the psycho-spiritual realm.

Peñalosa insisted that like most cities, Bogotá had been left deeply wounded by the twentieth century’s dual urban legacy: First, the city had been gradually reoriented around private automobiles. Second, public spaces and resources had largely been privatized. Cars and mobile vendors took over public plazas and sidewalks. People had walled or fenced in what were once public parks. In an age where even most of the poor had televisions, common civic space was disregarded and degraded.

This reorganization was both unfair—only one in five families even owned a car—and cruel. Urban residents had been denied the opportunity to enjoy the city’s simplest daily pleasures: walking on convivial streets; sitting around in public; talking; gazing at grass, water, falling leaves, and other people. And playing: children had largely disappeared from Bogotá’s streets—not because of the fear of gunfire or abduction, but because the streets had been rendered dangerous by sheer speed. When any parent shouted, “Watch out!” everyone in Bogotá knew that a child was in danger of being run over. So Peñalosa’s first and most defining act as mayor was to declare war: not on crime or drugs or poverty, but on private cars.