Read Haven from the Storm (Storms of Life #1) Online

Haven from the Storm (Storms of Life #1) 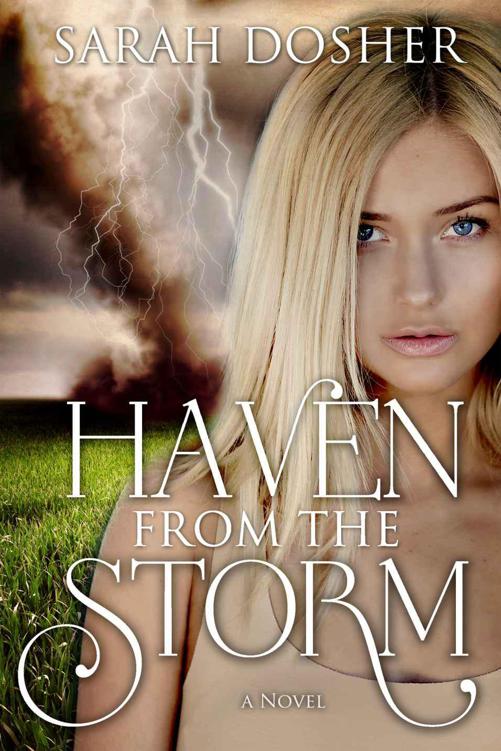 Editing by Jennifer Roberts of Indie After Hours

All rights reserved. No part of this book may be reproduced or transmitted in any form or by any means, electronic or mechanical, including photocopying, recording, or by any information storage and retrieval system, without permission in writing.

This is a work of fiction. Names, characters, places and incidents are the product of the author’s imagination or are used fictitiously, and any resemblance to any actual persons, living or dead, events, or locales is entirely coincidental.

the true meaning of the word Dad.

He took off running, jumped onto the frayed rope, flew out over the murky river and caused a splash large enough to send the waves onto the shore where I sat wiggling my toes in the sand.  We were surrounded by sunflowers that were almost as tall as me, but at barely five foot tall there wasn’t much in this world that didn’t look down on me.

We were the only two people in this secluded place.  I didn’t have a clue where my brother was and I didn’t care.  Dean and I weren’t left alone very often. I had no idea how I’d gotten so lucky, but I wasn’t going to question it.  I’d dreamed of this day since the moment I had stopped believing that all boys had cooties.

The water was so brown that I couldn’t see him beneath the surface until he slowly emerged, his eyes focused on me and a knowing smile on his face.  He swam to the shore and strutted toward me as if stalking his prey.  Just watching him move closer made me weak in the knees. Flutters flew through my stomach as I watched the sun reflecting off of his wet chest and perfect abs.

He stood over me and blocked out the sun; the cool water dripped from his body onto my warm skin.  My pulse quickened as I felt heat envelop me; I knew it was caused by more than this one hundred degree day.  Dean slowly descended until his body hovered a few inches above mine; he lightly caressed my neck and chest with his soft fingertips.  I looked into his dark eyes; I saw a burning desire that was just for me and I knew he saw the same desire in mine.  This was a side of Dean I’d never seen before. I had dreamed of it many nights, but he’d never shown me any affection beyond being his best friend’s little sister.  The way his body was pressed against mine, I knew he felt the same way I did.  The smile he gave me melted my heart and sent goosebumps skating across my skin. He studied my lips like he was mesmerized with their every curve. Closing his eyes, he inhaled deeply and began to shorten the distance between our mouths.  His perfect lips were so close that I could feel his breath on my mouth.

Suddenly, I saw my brother standing across the river, surrounded by sunflowers. He appeared to be shouting, but I couldn’t make out what he was saying until his voice was booming in my head.

I bolted awake, completely confused. I quickly realized my perfect afternoon with Dean was nothing but a dream, as usual.  Easton had his hands on my arms, shaking me, and I could tell by the look on his face that something was wrong.

“Easton, stop shaking me.  I’m awake, let me go.” I tried to pry his hands off my upper arms.

“A big storm is coming. Get up! We have to go to the cellar now.” He turned, picked up my sneakers and threw them at me. “Now, Lily!”

“But I don’t hear the storm sirens,” I responded as I sat on the edge of my bed. I had zero desire to put my shoes on and make the five mile journey in the darkness and rain to the closest cellar.

“Gary England just showed the storm and said for everyone in and around Kolby to take immediate cover. The tornado has already touched down south of town.”

I took a deep breath to try and clear the cobwebs left behind from sleep, then quickly put my shoes on. “Where’s everyone else?”

Easton grabbed my arm and pulled me out of my room. “Dad isn’t here and Mom’s in bed.  You get in the truck while I get her.”

The second I was out of the house, I was hit with pouring rain and large hail.   It felt like hot pokers to my warm skin.  Even with the small amount of light in our yard I could see the hail was blanketing the ground. It reminded me of the ice storm several years ago that knocked out power to our entire county for over a week.  I could barely see the truck and had no idea how I was going to reach it.

I heard a loud rumbling.  It sounded like a train was moving fast down the tracks by our house, but I saw no headlights.  Suddenly the light in our yard went out, surrounding me in darkness.

I didn’t know where to go or what to do.  I looked back to the front door, waiting for my brother to rescue me like he had my entire life, but he didn’t come.  Without him I was frozen.   The wind was so strong that I could barely stand and it was only getting stronger.  I moved to grab the post on the front porch, but slipped on the wet surface and fell to the muddy ground below, landing on my stomach.  I tried to climb to my knees, but was quickly blown off balance and stumbled to the edge of the yard, landing in the large ditch.  The water was deep and I struggled to hold my head up.  With the rain and hail hitting my face, and the water rushing over me, I struggled to breathe.  I was fighting to climb out of the ditch so my brother could find me; he should be outside by now.  I found my way to the edge and held on to part of the concrete culvert under our driveway, using the thick weeds as support.

The roar was deafening. The tornado was here.

The debris was flying all around me.  My long hair was soaked and lashing at my face from the strong wind. Hail was striking every inch of my body. I tried to press myself against the culvert for protection, but the coldness from the rain was quickly numbing me. I could barely feel my hands as they gripped the crumbling concrete of the culvert. I curled my legs underneath me, hooking them around the weeds.