Read His Confession (By His Command #8) Online

His Confession (By His Command #8) 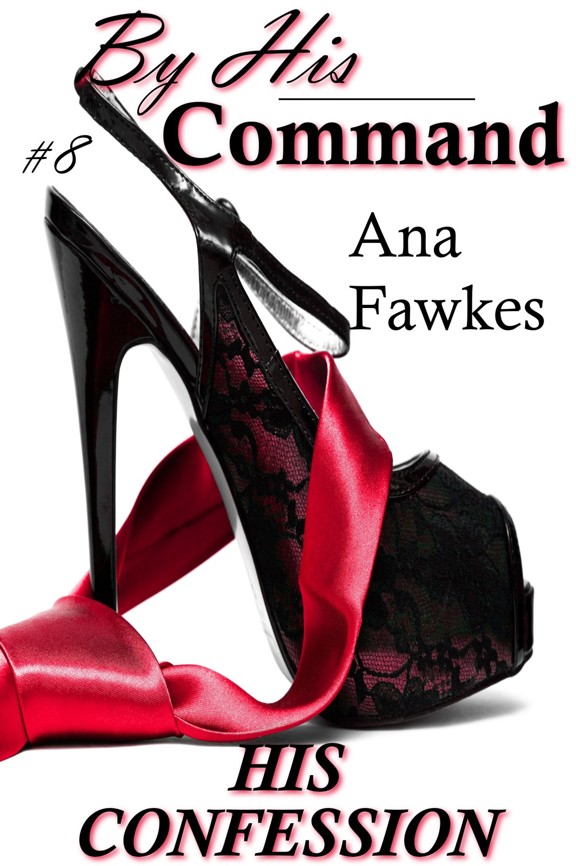 Jonathan Black is not
supposed to be fighting for his life.

At the hotel and
miles above in the sky, Isabella still must obey his commands. When 'K'
persists, Isabella is forced to make a decision whether or not to save the life
of one of Jonathan's enemies. Once pushed too far beyond her capabilities,
Isabella Grace's thoughts could change everyone... forever.

I stood frozen, shocked and
scared. Normally, when those kinds of feelings ran through my body, I would
look to Jonathan. He would help to ease them just by the look in his eyes or
the strong touch of a single finger.

But I didn’t have Jonathan
Black with me right then.

He was in the bedroom of our
hotel room and all I could see were his feet, pointed in the air. There was a
lifelessness floating around the room that was only competed by the vibrant
life that was Katherine. She stood in a red dress -
the red dress I
wore on a forced date with Kellen
- and
looked at me.

She was stunning, beautiful
and deadly all in the same breath. I had a chance to run; I could have been out
the door and gone before she knew what was happening. But she didn’t need to
keep her guard up with me. I needed to keep my guard up with her. I had no idea
what she was capable of.

And even if I ran, what
would I do? Where would I go? I had no connections and no contacts. As much as
Jonathan Black let me into his multi-billion dollar lifestyle, I wasn’t in all
that far. And that realty crushed my heart.

I touched my chest with one
hand and my lips with the other.

“You’re trying to escape
right now,” Katherine said. “Your mind is spinning. If you need a moment, you
can have the key to my hotel room. I’m right across the street...”

I gasped and remembered the
text messages Katherine had sent to me. How she claimed she had been watching,
waiting, wanting to kill both Jonathan Black and I. I looked again the bedroom
and felt my stomach turn. Katherine did not need to touch me at that point to
kill me. And when I met eyes with her, she knew it. By killing Jonathan Black
she would have effectively killed me.

I would have nowhere to go
and no urge to even try.

I would wait and wilt,
wanting nothing more than my own death - no matter how painful - just to have
the chance to maybe find Jonathan Black again. In some other realm.

“What do you want?” I asked,
my voice too shaken to even try to appear normal.

“Everything he took,” Katherine
said. “Doesn’t it bother you? Doesn’t it make you wonder... why you? Why now?
What about tomorrow? You think he’s going to stay with you forever?”

I swallowed and didn’t
answer. I didn’t want to think about tomorrow or the future. I’d much rather live
in a world where Jonathan Black did all the thinking and acting, leaving me
with surprises around every corner, keeping me alive and feeling like I had
purpose.

Katherine stepped towards
me, the red dress hugging her wide hips perfectly. Her hips shot left to right,
left to right. If this was the woman Jonathan Black once had and left, then
what was I? I compared nothing to Katherine... not in looks or action,
obviously.

She reached for my face and
touched my cheek.

“So soft,” she whispered.
“You’re like a delicate flower, aren’t you?”

“Look at you, so worried
about him. Does he worry about you?”

“That’s why he sent you into
the arms of a stranger,” Katherine said, referring to Kellen. “The arms of a
stranger with enough power, money, and connections that he could make you
disappear. You’d be... gone.”

The thought made me shiver.

Jonathan wouldn’t do that to
me, right? He wouldn’t just let Kellen steal me away and do nothing about it.

“He stole me from Kellen,”
Katherine said, “or that’s what he believes. Kellen too. The bottom line was
that Jonathan Black was much sexier than Kellen... which I’m sure you can agree
with... right?”

Katherine laughed. “Oh,
Isabella Grace, your innocence just pours out of you. Marvelous. Beautiful. It
actually turns me on and I have no interest in women.”

Katherine turned and walked,
moving as if she owned time and that time owed her something. The slower she
moved made me feel worse and worse about what waited for me in the bedroom. I
looked at Jonathan’s feet, still pointed in the air. They hadn’t moved an inch.

I shook my head and closed
my eyes, forcing the thought away.

I couldn’t believe it.

Katherine took a bottle of
wine from the counter and poured some into a glass that  was next to the wine.
She swirled it and the wine danced around the wide glass. She smelled it and
smiled, then took a big sip.

“Not sure what I’m smelling
it for or tasting it for,” Katherine said. “Just looks good, doesn’t it?”

And maybe that’s what she
wanted.

“Then tell me. You tell me
right now why you sent text messages to me and Mr. Black.”

“Mr. Black?” Katherine laughed.
“I remember a time when I called him that. But not anymore. He was the one
begging me. He was the one desperate to get away. But in the end...”

Katherine slid around to the
other side of the counter and opened a drawer. I stiffened and took a step back.
I immediately prepared my last thoughts as I waited for the gunshot.

Instead, Katherine pulled
out a knife. She held it up and where there should have been a glistening
coming from the blade, there wasn’t. There wasn’t a glisten because the blade
had blood on it.

I didn’t run, I went faster
than running. My mind had a one track purpose and that was to get to Jonathan
Black right then and there to know the truth. If he was dead, I couldn’t take
it, but I could see it. I could hold him. I could kiss his lips, one last time.
Maybe he was still alive, dangling by the threads of his own heartbeat. Maybe
he was waiting for me, to see if I’d come back to him.

Of course I would.

Did he doubt for a second I
wouldn’t?

Did he believe that
something would happen with Kellen?

I moved, my eyes on the
room. I made it no more than ten charging steps before I saw the flicker of the
red blade again. Katherine waved the knife at me and I panicked. I couldn’t
explain it but something about knives just freaked me out. I tried to stop but
couldn’t. I tripped over my own two feet and fell to the floor. On my hands and
knees I was in the position Katherine wanted me to be in.

I kept my head down, trying
to catch my breath and trying not to break down. As I turned my head I saw
Katherine’s black heels moving towards me. I looked up at her, feeling broken,
on the verge of my own death.

“Something wrong?” she
asked.

“Oh, that. Just something I
needed from Jonathan.”

She was so calm and
collected. She was much like Jonathan, as horrible as that sounded. She held
the knife between her pointer and thumb and hung it over me. I watched the very
tip of it moving left to right, left to right.

“Now that you’ve seen this,
I don’t need it anymore.”

Her fingers opened and the
knife fell. It hit the floor and fell to the side, blood smearing on the
carpet. It was just a few inches from my face. If I wanted to, I could have
licked the blade and the blood. Maybe the idea went through my mind for a
second, I’m not sure. When I looked back at Katherine she was smiling ear to
ear. She then bent her knees and in the most elegant fashion I’d ever seen, she
lowered herself to my level.

It was amazing to see.

In such a tight dress, she
moved with ease.

She touched my hair and I
felt tingles run through my body.

“Come talk to me,” Katherine
said. “Don’t make me go after your heart too.”

I whimpered and looked at
the bedroom. I moved to my feet and realized I was closer to Jonathan Black but
not close enough to know the truth of what actually waited in the bedroom for
me.

Katherine took my arm and
held it gently, patting my shoulder, guiding me to the couch.

“Oh, Isabella Grace, was
Jonathan ever okay? We have to be honest with ourselves now, don’t we?”

“I don’t understand what
that means,” I snapped.

That’s when the vile,
violent side of Katherine made a sudden appearance. The gentleness of her touch
a few seconds ago was gone. She grabbed my hair, pulled, and twisted. I cried
out as she turned me and threw me at the couch. She had strength that I
definitely didn’t see coming at all. I was at least thankful she threw me to
the couch and not into a wall or worse yet, out the window. My nerves ached at
the thought of falling from the hotel window to my death.

She managed to spread her
legs enough to climb on top of me. I was shaking and uncomfortable. I gripped
the cushions on the couch and wasn’t sure what to think next.

“You see,” Katherine
whispered in a seductive voice, “Jonathan didn’t just leave me... he left me
with nothing. His eyes changed, he was moving beyond anything I could do or try
to do. After all I did for him.”

“Trust me, Isabella Grace, I
did plenty. Much like you. I covered things up. I kept him happy. I kept him
alive. I kept him out of jail. I... did anything he needed to help him further
himself along.”

I swallowed and thought
about pushing Katherine off me. If she fell back at the right angle and the
right speed she would crash through the coffee table. I wanted to hurt her so I
could get to Jonathan but I didn’t want to kill her.

“You? Or you and Jonathan?”

“The money he owes me. I
heard there’s... oh... three billion dollars floating around somewhere. Money
that’s not his but he thinks it is. Money that I want. Right now.”

The way Katherine growled at
me made me shake uncontrollably.

“Shh... shh...” Katherine
rubbed my cheek. “Of course you don’t know. Why would you? He doesn’t share
secrets with anyone. You’re my messenger Isabella Grace, that’s all.”

Katherine rubbed my cheek
for a few seconds, her crazy eyes were ready to pop. She slid off me and stood,
doing so with polite movements that once again amazed me. She definitely had experience
in dresses like that. It made me wonder what it was the woman did. She looked
the part to get what she wanted and then leave, but did that include murder?

Truth or Dare by Jayne Ann Krentz
Uncovering You 5: Confessions by Scarlett Edwards
The Naked Truth: The Real Story Behind the Real Housewife of New Jersey--In Her Own Words by Staub, Danielle
Island of the Aunts by Eva Ibbotson
Belleza Inteligente by Carmen Navarro
Beyond Peace by Richard Nixon
Ghost Image by Ellen Crosby
Magic Burns by Ilona Andrews
The Temple Dancer by John Speed
The House of the Scissors by Isobel Chace
Our partner