Read How to Raise a Jewish Dog Online

How to Raise a Jewish Dog 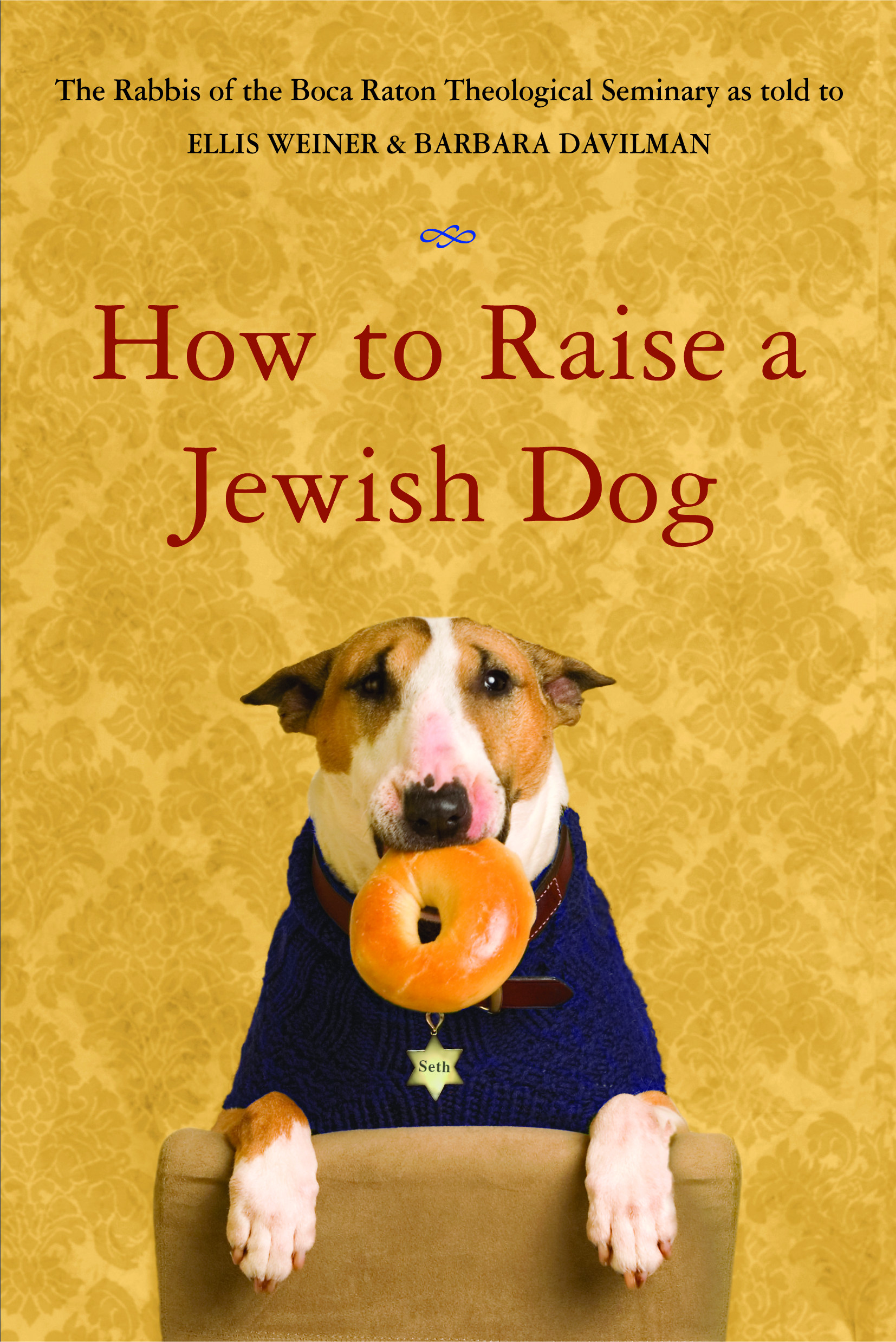 The information in this book is not intended to replace the services of actual dog trainers or actual rabbis. You are advised
to consult with actual dog trainers for the training of actual dogs. Similarly, you are advised to consult with actual rabbis
for actual religious training and spiritual guidance. Moreover, under no circumstances should you undertake to apply for rabbinical
study at the Boca Raton Theological Seminary, which does not exist. This book is a work of humor, and the people, places,
and animals in it are all used fictitiously.
How to Raise a Jewish Dog
is intended to do nothing but make you laugh. In the event that it is successful in this, we advise you to buy lots of copies
and give them to all your friends who have dogs or had dogs, which, by our count, should be about 60 million people. So get
started already. However, in the event that you do attempt to apply the technques and advice herein to your own dog, and are
unsatisfied with the results, you can’t say we didn’t warn you. Because we just did.

Chapter 2: The Relationship Between You and Your Dog

Chapter 8: Traveling with (or without) Your Dog

A Final Word from Rabbi Paul

Yiddish with Dick and Jane

Yiddish with George and Laura

T
hey are scenarios familiar to anyone who has ever had a dog:

•
You yell, “Down!” when your dog plants her two front paws on the chest of a visitor to your home, as though asking for a
dance. (Or, worse, she shoves her nose in the visitor’s crotch.) But she doesn’t get down. Instead she looks at you and wags
her tail as though to say, “Some fun, huh?”

•
You come home to find your dog cringing, his tail between his legs and looking as guilty as sin. It’s just as you feared:
he’s rooted through the kitchen garbage can and scattered its contents as far as the living room. You rub his nose in it and
cry, “Bad dog! No!” He looks contrite and apologetic. The next time you go out, he does it again.

• You’re out doing the right thing, hiking with your dog. You take her off-leash because, what the hell, she loves it, and
everybody else is doing it. She sees her friends and runs off. When you call after her, she pretends that she doesn’t know
you or—worse—that she’s deaf. This continues to the point where you have to scream at the top of your lungs, “Who wants a
cookie?!” so that every dog but yours comes running, and all the other dog owners look at you with disdain and pity because
you can’t control your own dog
even with cookies.

People and dogs have lived in symbiosis from literally the beginning of civilization, and still, after 200,000 years, we can’t
keep the dog from jumping up on the dining room table and eating all the hamburger buns. We coax and scold and bribe and berate
and threaten and praise. We’re nice. We’re not-nice. Nothing works. What can we do?

The Rabbis of the Boca Raton Theological Seminary have developed a technique that works, and they’ve (finally!) decided to
share it with the world.

From purebreds to hybrids to mutts, from puppies to old-timers, literally any dog—and, just as important, any owner—can benefit
from the Rabbis’ program. It doesn’t matter if you’ve tried other dog training plans or if this is your first one. And you
don’t have to be Jewish.

How did we meet the Rabbis and come to be involved with this project? That happened thanks to what at the time seemed like
nothing more than a routine chain of circumstances: Barbara’s cousin’s roommate’s sister’s boyfriend’s therapist’s mother
had a pug named Sam. Sam went through the Rabbis’ training and came out a changed dog. Word naturally filtered back, and we
decided to see what this program was all about.

Look familiar? Rabbi Monica feels the frustration and despair of many dog owners today. It is for them that this book was
written.

It has been our privilege to work with the small but dedicated group of clergymen-scholar dog trainers who have made the name
“Boca” synonymous with canine obedience. We would like to thank Rabbi Paul, Rabbi Alan, Rabbi Monica, Rabbi Mark, and Rabbi
Mary-Margaret, as well as all the other faculty and staff of the BRTS for their good humor, their deep dedication, and, above
all, their abiding faith that the way to teach a dog to behave properly is to make sure it knows it will never be without
you, and then to overwhelm it with love.

The simple son asks, “What is all this?”

W
e started the Boca Raton Theological Seminary (BRTS) in 1988 as an institution for the training of rabbis to serve the Reform-Progressive
Trans-Diasporatic Neo-Revisionalist Jewish community. Our first facility, the northeast wing of the Forty Winkzzz Motel, had
been closed for renovations for three years when we moved in. (We split the cost with the landlord to make the property usable
and got a great deal.) Not only was our staff relatively small in number, consisting of two instructors and three assistants,
it was also relatively young. Rabbi Paul, our founder and director, was at that time barely forty, and the other instructors
were of course even younger.

In those days, no one lived on-site; everyone, both students and staff, went home at the end of the day. Even so, some of
the faculty and staff, and a few students, revealed that they kept dogs as pets and fretted that the animals were unhappy
in their masters’ absence. Someone finally asked if it would be acceptable to bring dogs to the Seminary during classes.

Now, most theological seminaries discourage or forbid the bringing of pets onto the premises because their presence has a
tendency to distract students from their work. But we were—and still are!—young, and progressive, and constantly questing
to find new ways to pursue old, traditional goals. We’re always on the lookout for creative ways to be a Jew, new ways to
be a rabbi, and new ways to train rabbis. So (with little understanding of what we were letting ourselves in for) we said
yes.

And, in fact, it worked out very nicely. People brought their dogs in the morning and took them home at night without any
negative effect on classes or discussion groups. We even began to believe that the presence of the animals had a positive
influence on teachers, staff, and students. And, as will happen when people share important experiences together, we dog owners
began to influence one another, to create a common culture.

We traded notes on training and feeding; we learned about exercising and communicating. We combined our knowledge, wisdom,
and experience, focusing on techniques that worked and discarding those that didn’t.

After a while it began to dawn on us that we were getting pretty good at this.

Inspired by our success, we began to “foster” dogs from the local animal shelter. We took them in, trained them, and “adopted
them out” to loving homes for a modest fee. Thus, both the dogs and the Seminary benefited.

Indeed, the dog training program thrived to such an extent that we were able to purchase “the Forty” and refurbish it in accordance
with our religious and residential requirements, thus expanding both our dog training and our religious instruction operation.
The faculty and staff took up full-time residence in the facility. And then our students began to board there, too.

Not only were we learning and working together; we were now living together. But while in the classroom we were teachers,
administrators, and students, at the dog run, or around the pool, we were all just dog owners teaching one another how best
to train and care for these marvelous animals.

Soon word spread among the local Boca community that those crazy Rabbis at the BRTS had some skill with animals, and our neighbors—Jewish
and Gentile alike—brought their dogs in for a consultation. And so, both to reinforce our bond with the community and to raise
much-needed expansion funds, we began to offer dog training classes to the public. You didn’t have to be studying for the
rabbinate to bring in Rover or Fifi for a day’s or a week’s worth of classes. You just needed to be open to the unique form
of training principles we found ourselves developing.

And we noticed a funny thing.

All the techniques we used in our dog training program came from two sources: the things our parents had done in raising us
as children and the life strategies we acquired in response to our upbringing.