Read I Didn't Do It for You Online

I Didn't Do It for You 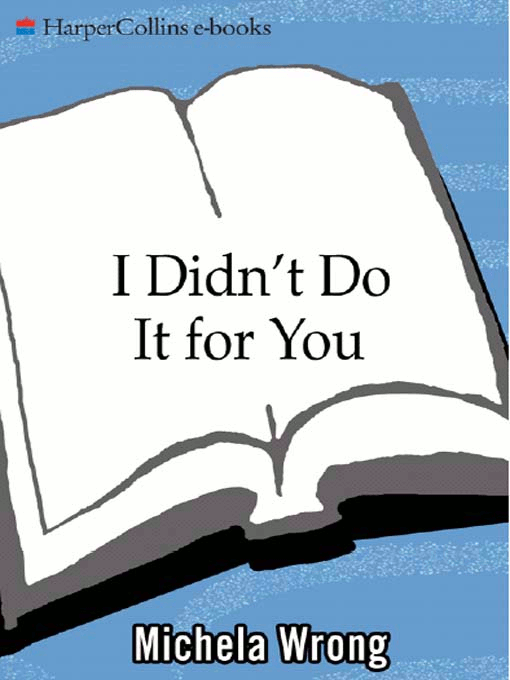 I Didn't Do It for You

How the World Betrayed a Small African Nation

To Elena and Silvia Harty, as promised

Chapter 1Â Â Â The City Above the Clouds

Chapter 5Â Â Â The Curse of the Queen of Sheba

Chapter 13Â Â Â The End of the Affair

Chapter 17Â Â Â A Village of No Interest

Other Books by Michela Wrong

It was well past midnight, and in Cairo airport's transit lounge it was clear most passengers had already entered the trance-like state of passivity that accompanies long-distance travel. Outside, in the fluorescent glare of the hallway, a trio of stranded Senegalese women traders, majestic in their colourful
boubous,
were shouting, with operatic volume, at the Egyptian airport staff behind the counter, who were responding with an icy silence that said more about Arab attitudes towards black Africa than direct insults ever could. But here in transit, eyes had glazed over, the energy had leached from the air. A group of Nigerian youths, whose clothes gave off the nose-tickling aroma of dried fish, lay slumped in the plastic orange scoop seats, spines turned to jelly. They were being messed around by EgyptAir staff, who couldn't be bothered to check them in to the airport hotel their tickets entitled them to. They seemed past caring, anger had long since given way to exhaustion.

A few seats away, a middle-aged Pakistani businessman was fighting the prevailing mood of stupefied indifference. Visiting cards at the ready, he was in defiantly chatty mode, and was taking the fact that the airline had mislaid his luggage in his stride. (âEgyptAir no good,' he confided. âHmm, yes, I know.') He worked for a company that manufactured soap powder, he said, and constantly travelled the African continent and the
Middle East, sizing up possible markets for his multinational.

His brow furrowed, he must have misheard. âYou are writing a book about Algeria?'

âNigeria?' He was floundering now.

âNo, no.
Eritrea
.' Enunciating the word with the exaggerated lip movements of a teacher addressing a class with special needs, I searched for some explanatory shorthand. âYou know. Small country on the Red Sea. Used to be part of Ethiopia. It's only two hours' flight from here. I'm waiting for my connection.'

There was a brief silence. This seasoned traveller looked both flummoxed and embarrassed. âI'm sorry. But I've simply never heard of the place.'

It was a conversation that was to keep recurring throughout the four years I spent writing this book. Mention that I was researching Eritrea and the reaction would be a sympathetic nod and ruminative silence as the other person tried to work out whether I was talking about a no-frills airline, a Victorian woman novelist or, perhaps, some obscure strain of equine disease. The same ignorance, I discovered, extended to the written record. I read books on Art Deco and Modernist architecture that made no mention of the city of Asmara, containing some of the world's most perfect examples of the styles. I waded through weighty accounts of the American intelligence services that either never referred to the fact that Eritrea had been the site of one of Washington's key listening posts, or dismissed it in a few paragraphs. I dusted off biographies on the suffragette Sylvia Pankhurst that treated her involvement in the Horn of
Africa as little more than an eccentric coda to her life. Whether in conversation or in print, Eritrea rang few bells.

At first, it amused me, then, slowly, it began to irritate. My annoyance grew in parallel with my knowledge, for the deeper I delved, the clearer it became that Eritrea had never been the obscure backwater suggested by the polite, blank expressions. Its narrative was entwined with those of colonial empires and superpowers, its destiny had engaged presidents in the White House and leaders in the Kremlin. It had obsessed emperors who believed themselves descended from Solomon and preoccupied dictators who took the Fascist salute.

I became increasingly defensive as I staked out claims to relevance, spelling out links and liaisons obliterated by the passage of time. âYou know, we ran the place for ten years,' I would say, talking to a fellow Briton. Or, if it was an American: âActually, the US had one of its most important spy bases in Eritrea during the Cold War.' As for the Italians, I heard myself speaking with the fixed-eye testiness of someone lost in a private obsession: âIt was your oldest colony, your “first-born”. Didn't they teach you that at school?'

History is writtenâor, more accurately, written outâby the conquerors. If Eritrea has been lost in the milky haze of amnesia, it surely cannot be unconnected to the fact that so many former masters and intervening powersâfrom Italy to Britain, the US to the Soviet Union, Israel and the United Nations, not forgetting, of course, Ethiopia, the most formidable occupier of them allâbehaved so very badly there. Better to forget than dwell on episodes which reveal the victors at their most racist and small-minded, cold-bloodedly manipulative or simply brutal beyond belief. To act so ruthlessly, yet emerge with so little to show for all the grim opportunism; well, which nation really wants to remember that?

The problem, as the news headlines remind us every day,
is that while the victims of colonial and Cold War blunders do not pen the story that ends up becoming the world's collective memory, they also don't share the conquerors' lazy capacity for forgetfulness. Any regular Western visitor to the developing world will be familiar with that awkward moment when a local resident raises, with a passion and level of forensic detail that reveals this is still an open wound, some injustice perpetrated long ago by the colonial master. Baffled, the traveller registers that the forgotten massacre or broken treaty, which he has only just discovered, is the keystone on which an entire community's identity has been built. âGosh, why are they still harping on about that?' he thinks. âWhy can't they just move on? We have.' It is a version of the âWhy do they hate us so?' question a shocked America asked in the wake of September 11. Eritrea's story provides part of the answer to that query. It is very easy to be generous with your forgiving and forgetting, when you are the one in need of forgiveness. A sense of wounded righteousness keeps the memory sharp. Societies that know they have suffered a great wrong have a disconcerting habit of nursing their grievances, keeping them keen through the decades.

It's hard to think of another African country that was interfered with by foreign powers quite so thoroughly, and so disastrously, as Eritrea. âMy country has a lot of history,' an Eritrean academic once told me. âIn fact,' he added, with lugubrious humour, âthat's all it has.' And like Palestine and Rwanda, East Timor or Northern Ireland, Eritrea's fate has illustrated the truth that, when it comes to destabilizing regions and disturbing the sleep of nations, size doesn't matter. When the UN laid the groundwork for a guerrilla war by ushering in a flawed constitution in the 1950s, Eritrea's population was slightly more than 1 million. When Ethiopia's mighty army lost to what its leadership had dismissed as âa handful of bandits' in 1991, Eritrea's residents numbered less than the
population of Greater Manchester today. A province no larger than a medium-sized American state, most of it uninhabited, raised a clamour so loud that in the end it could no longer be ignored. Eritrea's history resembles one of those expensive television advertisements in which the flicking of a tiny cog leads to the toppling of a spanner, which sends windscreen wipers gyrating, a tyre rollingâa long chain of cause and effect which eventually climaxes in the revving of a sleek family car. Grudges which are not addressed acquire a momentum all their own, shuddering across continents and centuries until they erupt in a thunderous roar. âSmall' conflicts, left to fester long enough, have an uncanny way of bringing down empires.

Written as Eritrea faces one of the toughest challenges in its history, this is a book about betrayal, repeated across the generations, and how the expectation of betrayal can both create an extraordinary inner strength and distort a national psyche, sending a community down strange and lonely paths.

Despite the glazed-eye reactions I encountered, Eritrea's history is not an abstruse irrelevance. The peculiar mulishness of its citizens did not spring spontaneously into existence. Eritrea's seeming idiosyncrasies have entirely logical roots, roots thatâto the Western readerâreach surprisingly close to home. They cannot be unpicked from the vainglorious dreams of a 19th-century Italian man of letters, an English suffragette's clash with snooty British officialdom and the pantomime antics of several generations of GIs. In a new era of superpower intervention abroad, in which the War on Terror has replaced the fight against Communism as justification for Western military adventurism, the old clichÃ© about the dangers of forgetting history's mistakes holds truer than ever. Part and parcel of our own story, Eritrea should serve as a lasting cautionary tale, encouraging us to pause and ponder before rushing in. We forget the roles we play in such far-off outposts at our peril. 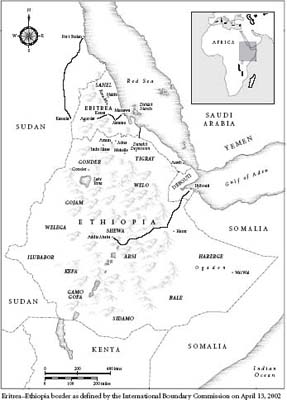 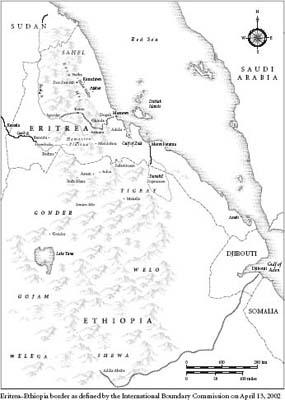