Read I Had the Right to Remain Silent...But I Didn't Have the Ability Online

I Had the Right to Remain Silent...But I Didn't Have the Ability (9 page)

BOOK: I Had the Right to Remain Silent...But I Didn't Have the Ability
6.15Mb size Format: txt, pdf, ePub
Read Book Download Book
ads
I
'm on a diet right now, so my life's not worth livin'. Don't you hate that shit?
I'm getting dieting tips from skinny people. That's fun. My mother weighs eighty pounds. Here's her tip: "Drink lots of water. You'll be less hungry."
You know what happens if you drink a lot of water?
You're less thirsty. Just as I suspected.
I still look OK sometimes. 'Cause I wear expensive suits now, and if you drape $5,000 worth of clothes over a pile of shit, it looks all right.
Look bad naked, though. Ain't no hidin' that.
The only person that knows what I look like naked right now, which is the worst I've ever looked, is my wife. And she
has
to have sex with me.
And she makes me wear the suit.
I cut a little hole right here the size of a cheese wheel. And I come in low under the radar. 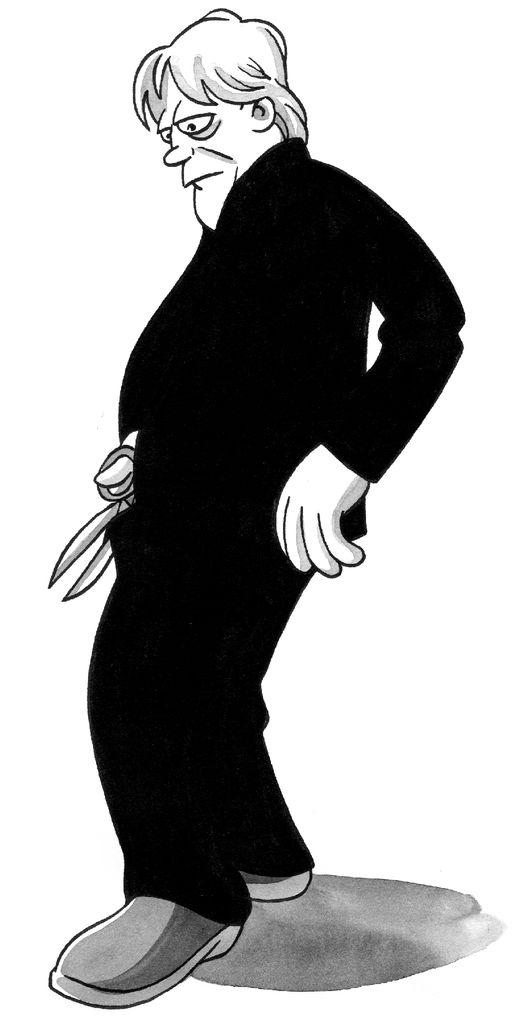 I
was having lunch with a buddy of mine, and my wife. And I was listening to somebody else's conversation, which I know is not a great quality, but it is one of mine.
And it's just kind of a pet peeve. I hate the analogy I heard this guy use. This guy's talking to a friend of his, and he goes, "I have a good job, but I have my cross to bear. The guy I work with talks all day long."
And I'm like, " 'Cross to bear'? That's the analogy you've chosen?"
Folks, do you think at any point while Jesus was dragging this thousand-pound hunk of lumber through the streets of Jerusalem, he ever once said, "Man, this thing is heavy, but at least I don't work with some chatterbox." 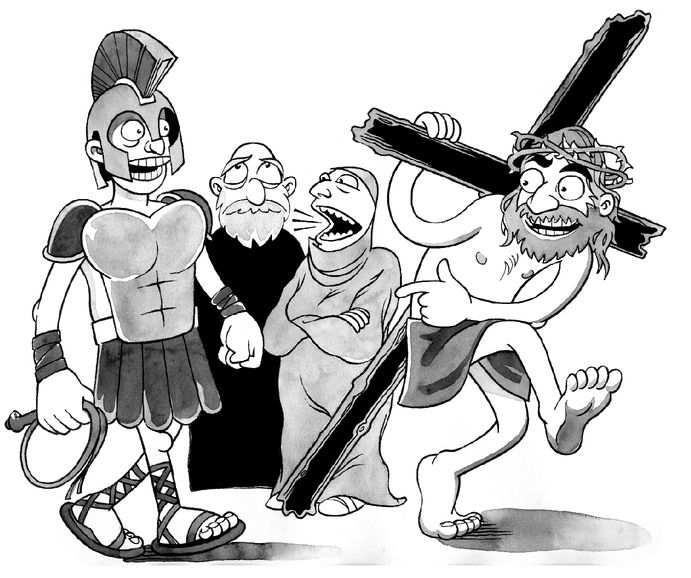 I
took six weeks off last summer. And then I realized, "I only work three hours a week. What the fuck am I taking a break from?"
Actually, I hurt my knee, and I was laid up for six weeks. I couldn't walk on it. I was just laying around watching TV. And I don't really watch TV much normally.
Anyway, I'm watching these daytime talk shows. There's like five of these shows. And I can't understand how they all stay on the air.
Where do they get the fodder to fuel all these shows, an hour a day, five days a week, fifty-two weeks a year? Are they going around to trailer parks all over America asking people, "Do you fuck your sister?"
"Yeah."
"Get in the truck. Montel, we have a sister fucker."
I was watching an episode of
Montel
. And the theme of the show was male transsexuals who were single-handedly raising their children.
Now, the fact that they found six of these concerns me. I thought there'd be one, right?
No, they got a whole row of these cats, in taffeta ball gowns and bouffant hairdos. Kids in tow. 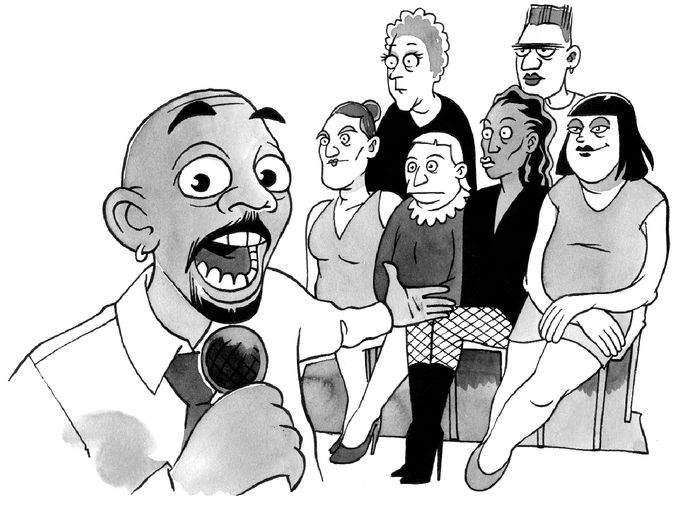 And I couldn't help but wonder, what kind of stunt did these kids' mothers pull, that would make a judge look at her, and look at "her," and go, "You in the hot pants and the go-go boots, you get the young'uns."
These are transsexuals, not transvestites. A transvestite is a man that wears women's clothing. It's perfectly harmless. We all do it.
And actually if a woman wears a man's clothes, that's also being a transvestite, but nobody gives a shit. A woman can put on a man's suit and take out the trash, and nobody cares. But you let the neighborhood watch catch me mowing the lawn in my teddy one fuckin' time, all of a sudden I'm the neighborhood freak. 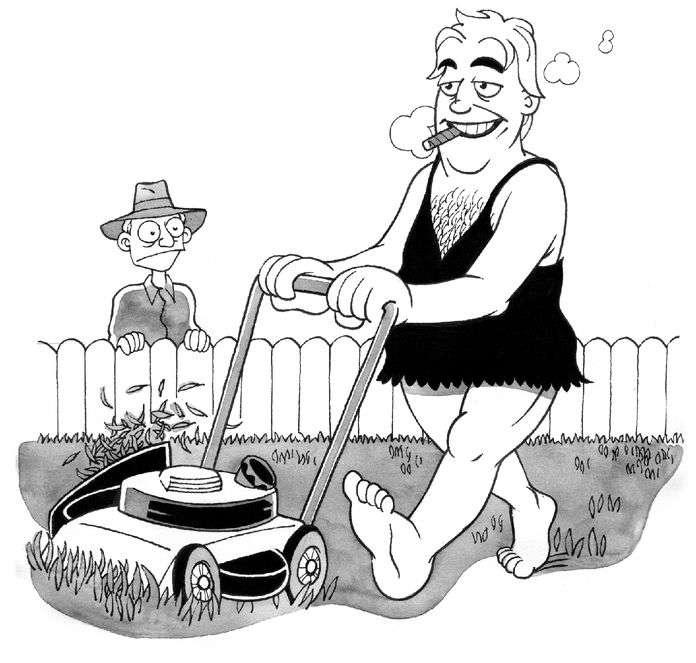 A transsexual has taken this a step further. A transsexual has taken off the bat pole, and put in a bat cave. For whatever reason.
And the main guy that they were talking to was from Texas--the guy's like six foot three. I just can't imagine a big ole Texan sauntering into a clinic and going, "Doc, I got an idea. What I want you to do is cut off my dick and balls and build me a nice vagina right down there."
You better make sure that's what you wanna do before you do it. Or you'll come back on Monday: "Doc, do you have my dick in a jar somewhere? I regret that whole decision, and I quit drinking tequila." 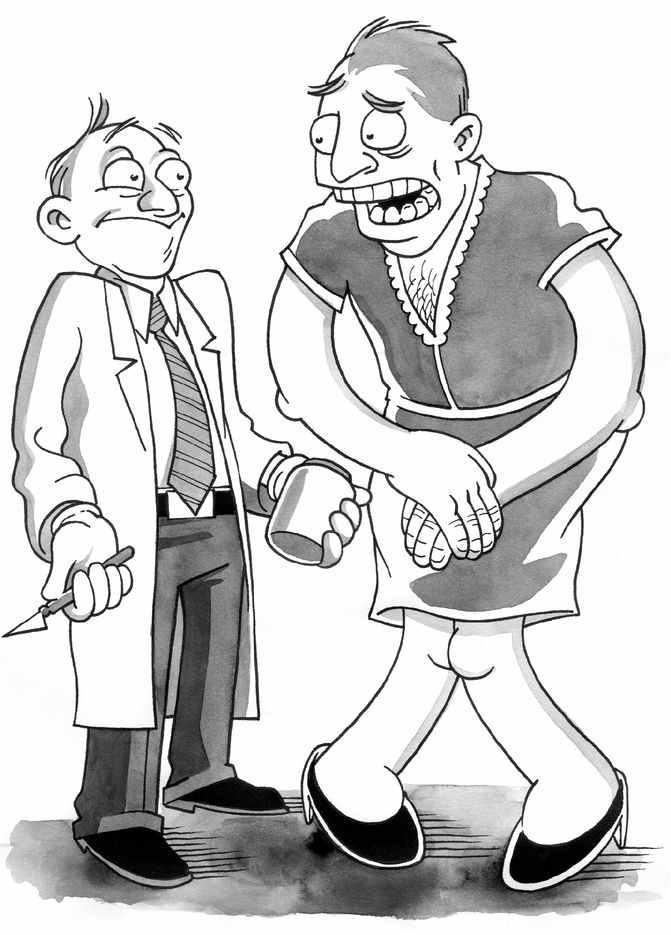 "Yeah, we do. And we can thumbtack it to your forehead. Now you're a dickhead."
They turned the microphone over to the audience. And they were trying to ask questions that seemed sensitive and pertinent, you know. They're asking questions like, "Was there a point in your life where society failed you, and failed to provide the things that you needed emotionally?"
And I'm like, "Shut up. Somebody ask the real question: What the fuck is wrong with you? You cut your dick off, man."
I wonder if they do keep their dick in a jar. If you do, you run the risk of your kid finding it and taking it to school for show-and-tell.
"This is my mother's old cock."
Be really funny if the high school bully stopped him on the way to school and said, "I want your lunch. Umm, that needs mustard."
I
was at a party the other day, and, this is kind of weird, but I was talking to a friend of mine that I hadn't seen in a while, and a guy comes up to us that he knows, that I don't know. And while we're having a conversation, he stops and introduces me to this fella.
And I'm not paying attention, which I'm usually not. And I go to shake the guy's hand, and while I'm shaking his hand, I realize that it's not really a hand so much as, as, um . . . It's got, like, two pieces of bone with, like, a web or something that goes between them, and then nothing, and then, like, a little stump with a web.
It's a flipper.
Now, no offense if you have a flipper, but if you do, don't you feel some obligation to warn somebody? Especially if you know they're not paying attention. Anything, like, "Watch out, it's a flipper."
Because I ended up accidentally hurting the guy's feelings, you know. I'm like, "Nice to meet you. Wha?! What is that, a fuckin' flipper?"
You feel bad. I'll touch his flipper, I just gotta see it first. Then I'll two-hand it to prove I'm not afraid.
"I'll shake hands with you, Flipper Man. I bet you can really swim fast." 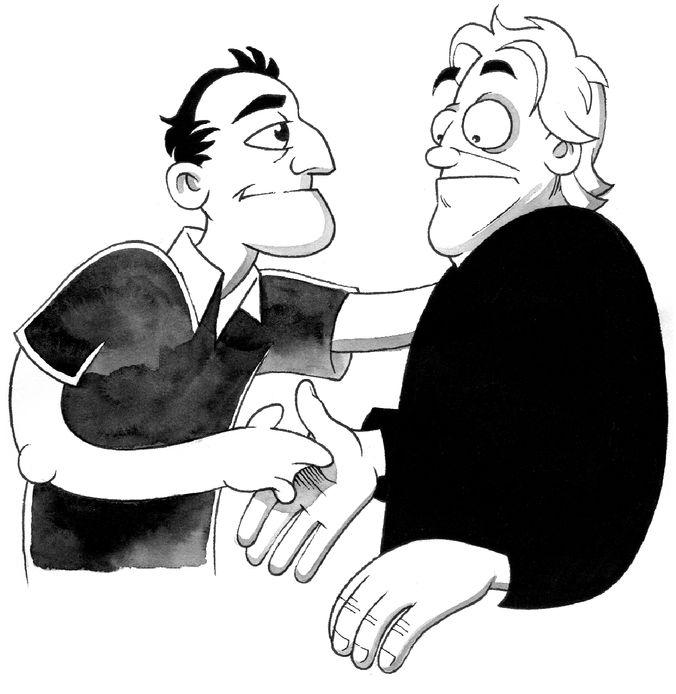 I
watched the Michael Jackson trial. And I'll tell you what, Michael wasn't convicted of anything, and I know for a fact that people try to scam rich people out of money.
But here's a little parenting tip, whether Michael is convicted or not convicted, don't let your kid go over to Michael fuckin' Jackson's house. How about that? You know, take responsibility as a parent.
He's got a Ferris wheel in his front yard. I guarantee you, every pervert in America is sitting outside of a school in a hot van with Milk Duds melting in their lap, going, "If I only had a Ferris wheel in my front yard, they'd be lined up at the gate."
I can't imagine as an eight-year-old, my parents sitting me down going, "You're gonna spend a couple of days over at Perry Como's house.
"Some other kids have been over there, and well, things haven't gone so great. But it doesn't hurt much. And we're broke." 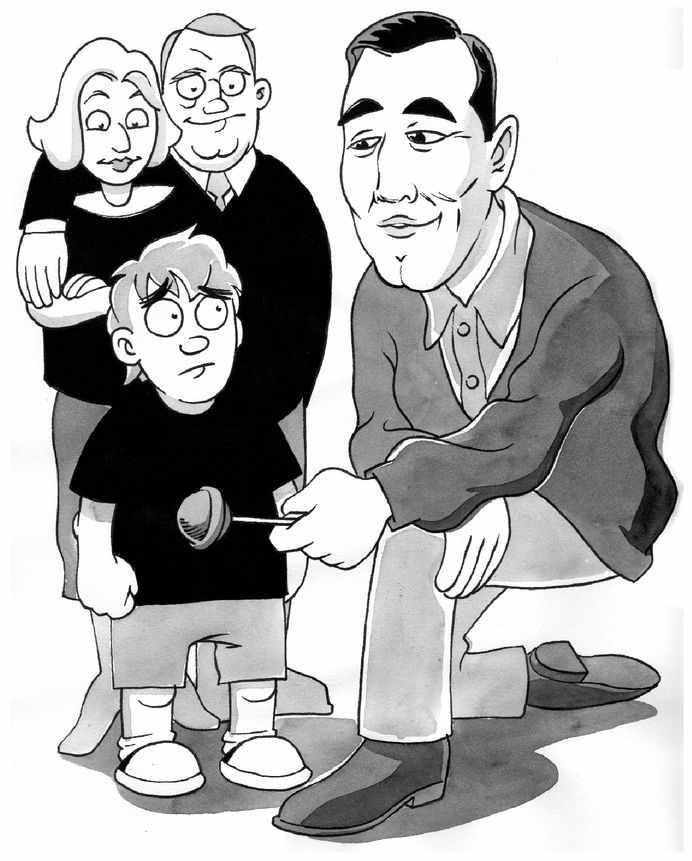