Read If I Lie Online 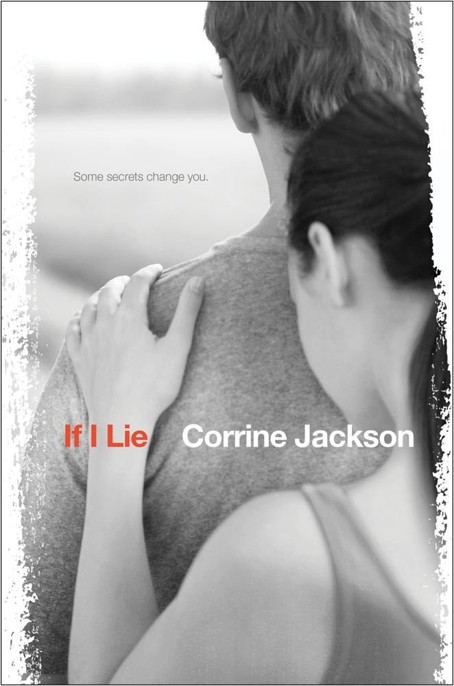 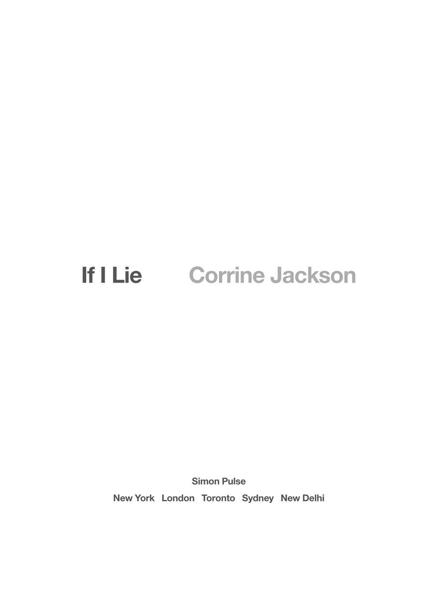 To my sister, Kym—
You are my way home when I am lost.
Love,
Me

His tongue weighs each word to cause the most pain.

My father’s news drops like a bomb, blasting the air from my lungs, and everything in me shrieks,
Not Carey.

My dresser bites into my backbone. I deflate, clamping my fingers around the Nikon to hide how they tremble. I want to throw up, but my father blocks escape to the bathroom, his shoulders spanning the doorway. Late February morning sun slips through the window blinds and swaths his perma-sunburned face in blades of light and dark. Shadow camouflage.

My stomach twists and sweat slides down my sides. He doesn’t care what this news does to me. How it destroys me. His chin’s up. Wintergreen eyes narrowed under sparse blond eyebrows. Hairline retreating from the neat rows of lines crossing his forehead. I’m barely holding it together, and he doesn’t
bother to hide his disappointment at my reaction to his words.

His lips thin. “Quinn, did you hear me?”

Since the scandal six months ago—
that
scandal we don’t speak of—my father says Carey’s name with reverence. They are two Marines, two men who’ve fought for a freedom I no longer feel. Comrades betrayed by the women they left behind.

Sand and grit have rubbed between the pleasantries in Carey’s e-mails since I stopped answering him weeks ago.
We’re leaving Camp Leatherneck soon
—pleasedon’ttell—
we’ll be patrolling roads, clearing IEDs, something big’s coming
—imissyou—
you may not hear from me for a while
—Godidon’twanttodie—
you must be busy with school and all
—talktomeQuinn—
I hope to hear from you soon.

Carey could be a hostage. He could be dead, his brown body abandoned and decaying in a foreign country. The town has watched the CNN reports on Operation Moshtarak for the last week, tracking Carey’s battalion, the 1/6, as waves of Chinooks dropped troops into Marjah. Rockets, machine-gun fire, mortars, and IEDs met them. I’ve held my breath for days, trying to pick Carey out in the news footage. What if . . .

His parents must be destroyed. They know by now, if my father knows. How did they react? The Marines would have sent at least one soldier to the Breens’ house, and I imagine how Mr. Breen looked hearing the news. Evaluating. Slow and methodical, his eyes focused on the ceiling to hide his thoughts. When
composed, he would catch his wife’s worried gaze, and Mrs. Breen would KNOW. As if she waited—expected—the worst to happen. Her body would fold, welcoming sadness, drowning in it, and Mr. Breen would support her, catching her before she hit the ground. If she blamed me before, it will now be a thousand times worse. I can’t even grieve for Carey—not where people can see me.

Carey has sewed my mouth shut.

My rage blows away, leaving hopelessness in its place. “I heard you, sir.”

“You’re not to leave the house unless it’s to go to school or to work. People are going to be in a lot of pain when they find out. I don’t want your presence making them feel worse. You’ve done enough, you hear me?”

I nod. He’s right. Nobody will want to see me. Today, I will not go to Grave Woods. I set the Nikon on the dresser behind me, among the neat pile of lenses and memory cards. My hands feel useless without my camera. Void.

My father assumes I’ll obey. His uniform has starched his backbone so straight he walks tall even in faded jeans and a worn Marine
THE FEW. THE PROUD
. sweatshirt. Lieutenant Colonel Cole Quinn’s orders—like the Ten Commandments—are disobeyed at your own peril.

His eyes narrow to two dashes and sweep my room. They land on the bed with its sheets and blanket tucked military-style, as he taught me. The dresser with its clean top. The desk with the books lined up by size and subject. Nothing out of place. No thing to criticize except me. I cannot remember the last time his eyes stayed on mine. After I was branded the “town slut,” he looks through me.

Maybe if we both wish hard enough, I will become invisible, with watery veins and glass bones. My translucent heart will beat on, but my father will not notice.

He sees only my mother in the spaces around me.

He leaves my bedroom door wide open. Moments later, my father’s study door shuts with a
snick
. In his sanctuary, the bookshelves lining one wall tell the history of war from
A
(American Revolution) to
Z
(the Zulu Civil War). There are biographies of generals, World War II memoirs, and academic tomes about US military strategy during Vietnam. My father studies war as a hobby like other men hunt Bambi or rebuild classic engines.

A mahogany desk faces the Wall of War, and there are no chairs in the room other than my father’s. I wonder if he has done this on purpose.

Holed up in his office, my father will not reappear until chow time at 1800 hours. Alone, I lie on my bed, pull the plain sky-blue bedspread over my head, and cry inside my tent.

The phone rings from the hallway—Dad took my phone
out of my room six months ago—and I pull myself together to answer it. Barefoot, I pad across the wood floor and into the hallway to the small antique sewing table that my mother restored a million years ago. It has the phone she put there. It’s the old rotary kind, where you slip your finger into the holes and spin the dial for each number. Mess up and you have to start the process all over again.

The door to my father’s office cracks open—his way of letting me know that he is listening.

A sigh that’s really more of a grunt comes in response. I know the voice, but he rarely speaks to me.

“Hey, Nikki,” I lie. I lean against the wall and wind the spiral phone cord around my finger as if I’m settling in to talk to my old friend. My father’s footsteps recede as he falls back to his desk. I grip the phone tighter.

“Talk to me, Blake,” I beg in a whisper. “I know it’s you.” We hadn’t always liked each other, but we’d had Carey in common. Me, his girlfriend; and Blake Kelly, his best friend who was more like a brother. We’d always kept the peace because Carey demanded that kind of loyalty. Despite everything that happened, that shouldn’t have changed.

“You heard, didn’t you? Are you with his parents?” It made
sense. The Breens have turned to Blake for comfort since Carey received his orders. I’m guessing he’s calling to tell me about Carey so I’m not blindsided at school Monday.

“Do they blame me?” I don’t want to know, but the question scrapes out of me.
Do you blame me?

There are some things nice girls don’t do in a town like Sweet-haven, North Carolina. Six years ago, before my mother walked out on us with my father’s brother, she told me, “First chance you get, girl, run like hell. And for the love of all that’s holy, don’t end up a soldier’s wife.” A smudge of bitterness clung to the smoke from her Virginia Slims Menthol. Her Avon’s “Light My Fire” red lips pursed around the filter one last time before she crushed the stained cigarette butt into the glass ashtray she hid whenever my father came home on leave. Short black curls spiraled in defiant abandon when she shook her head. “I wish I’d never seen
An Officer and a Gentleman
. Damn Richard Gere and his dress whites.”

At eleven, I had no idea what my mother meant, but I understood one thing: My mother wouldn’t pretend to be a nice girl forever.

With her tanned skin and snow-white sundress, my mother reminded me of actresses in the old movies she liked to watch. I had told her so, and she had caressed my cheek, the warmth of her
fingers lingering for hours after. I loved my mom best when my father was gone. When his battalion deployed their fighting would cease, and the temperature in our house increased by ten degrees.

The summer I turned eleven, though, she dumped me at my grandmother’s, dropped a kiss on my forehead, and told me to “be a good girl.” She waved good-bye from the passenger seat of Uncle Eddy’s Buick. It wasn’t until my father returned a month later that I realized she wasn’t coming back. And I could only blame myself.

After all, I’d told him the one thing sure to tear our family apart. I’d told my father that Uncle Eddy had slept in my mother’s bed.

Located just west of Camp Lejeune, Sweethaven had a good number of sons (and some daughters) who’d enlisted straight out of high school. Many families could claim a Devil Dog in every generation, and all could agree: Cheating spouses were the scum of the earth.