Invasion of the Boy Snatchers 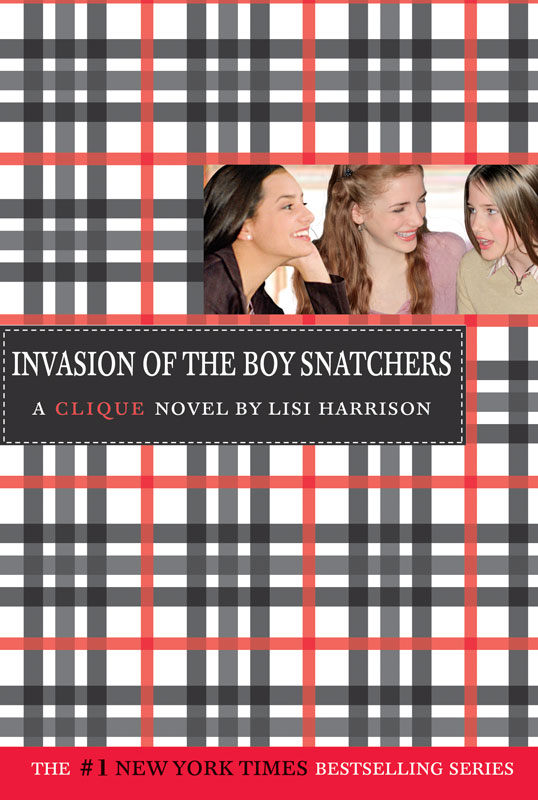 If you like this book, you may also enjoy:
Twilight by
Stephenie Meyer
The Dating Game
by Natalie Standiford

T
HE
B
LOCK
E
STATE
M
ASSIE’S
B
EDROOM

“Done, done, and done.” Massie Block stretched out her arms so she looked like the letter
T
, then collapsed face-first onto the fluffy purple duvet cover on her bed. Goose-down feathers puffed up around her like a taco shell when she landed, and she could feel her aching legs throbbing to the beat of her pounding heart. Who knew putting twenty-six Christmas presents away could be harder on the body than an eight-hour shopping spree on Fifth Avenue?

After a brief moment of peace, Massie’s amber eyes popped open and filled with panic.

“Ehmagod, Bean, what have I done?” She beckoned to her black pug. “Now my sheets are all messy.” Massie used her last bits of arm strength to push herself off the bed, and once she was standing on her white sheepskin rug, she smoothed her hand over the duvet and pulled each corner so it was taut and crease-free. She admired the gold lion charm as it dangled off her bracelet and dragged across the purple cotton. It was a Christmas gift from Claire. And Massie legitimately liked it.

“It has double meaning,” Claire had said as she’d handed Massie the square-shaped red metallic box on Christmas day. “It’s a Leo, ’cause that’s your birth sign. And since it’s a lion, like my last name, you’ll always remember who gave it to you.”

Massie remembered how her stomach had churned after Claire said that. It had reminded her that the Lyons were about to move to Chicago. And Claire’s bright, innocent smile made it obvious that she still had no clue. Now that the holidays were over and school was about to start up again, Jay Lyons was finally going to break the news to his only daughter. Massie checked the stainless steel face of her new Coach watch with the dyed mahogany calf-hair strap. In one hour Claire would know everything.

Massie shook her head. She had worked too hard perfecting her bedroom and refused to let the Claire situation cloud the moment. There would be plenty of time for sadness later. So instead, she put her hands on her hips and admired her work.

“Bean, I don’t know what gift I ah-dore more.” Massie’s puppy was curled up in her new doggie bunk bed, fighting to keep her tired eyes open. “My new Bean mannequin or my Glossip Girl collection? They are both so ah-mazing.”

Every year for Christmas Massie got a new mannequin that had been custom made to her exact size. It was the perfect way for her to try on different outfits without having to get undressed and mess up her hair. Right now, her mannequin was wrapped in three different Dixons—the colored mesh tubes that she’d gotten as a special gift from the
Teen People
fashion editors. The gift had been their way of saying thank-you for modeling in their holiday issue. And Massie couldn’t have been happier. She had already thought of thirty-seven ways to wear a Dixon and knew that with a little time she’d think of more.

But Massie wasn’t the only girl with her own mannequin. This year Santa had gotten one for Bean too.

The spongy foam dog was dressed in a maroon cable-knit wool sweater, tiny beige Ugg boots, and a cashmere scarf covered in different-colored pom-poms. It was tonight’s après-dinner walk ensemble. Bean had picked it out herself.

To the right of the mannequins, beside Massie’s closet door, was a long mirrored shelf lined with twenty-two different tubes of lip gloss. Now that she was a member of the Glossip Girl club, a fresh exotic flavor arrived at her doorstep every morning. Candy Apple was the latest addition. And it was delicious.

Her enormous walk-in closet was stuffed with colorful stacks of cashmere sweaters that she’d bought in Aspen and four new pairs of jeans. She’d even managed to add seven new rhinestone brooches to her current collection, which brought her total up to twenty-four and pretty much guaranteed her title of Girl with the Most Brooches at Octavian Country Day School.

In a moment of sheer creative brilliance, Massie had stuck them to a red corkboard above her desk so they would sparkle over her head while she did her homework, like constellations made of jewels.

Yes, Massie was ready for the new semester.

She sat down at her desk and switched on her new Power Mac G5 computer. It was time she shared her “In” and “Out” lists with the public by turning them into a blog. What better way to help losers keep track of the latest trends? It was all part of her New Year’s resolution to make the world a better place. Massie smiled to herself while the G5’s hard drive booted up. She was making a difference.

The instant Massie was online, a barrage of “welcome back” instant messages popped up on her screen. She clicked on Alicia Rivera’s first.

Massie rolled her eyes. Every time Alicia came back from visiting her family in Spain she acted Spanish. She spoke with a Spanish accent and overused words like
loco
and
amigo
. Thankfully, by midweek she’d remember she was 100 percent American and return to normal.

HOLAGURRL:
MY 13-YR-OLD COUSIN NINA CAME BACK WITH US. SHE’S GOING 2 SPEND THE SEMESTER @ OCD. WE R HAVING A WELCOME 2 WESTCHESTER FIESTA 4 HER 2MORROW NIGHT. EVERY 1 IS INVITED. BRIARWOOD BYZ 2!

Massie felt the bottoms of her feet tingle when she read, “Briarwood boys.” The Briarwood Academy was known for two things: its soccer team and ah-dorable boys. And her latest crush, Derrick Harrington—or Derrington, as she secretly liked to call him—happened to be a star in both categories. And if she remembered correctly, Alicia’s cousin Nina would not be a threat.

Massie had seen enough Nina pictures over the years to know that the girl was a full-fledged LBR—Loser Beyond Repair. Her clothes were totally Sears. And her hair was overprocessed and underconditioned. She looked like a “before” picture from
Extreme Makeover
.

Thankfully, Nina was one year older than Massie, so chances were their paths wouldn’t cross. There was nothing worse than being seen with a dorky foreign exchange student. It was popularity poison.

An IM from Kristen Gregory.

SEXYSPORTSBABE:
SOOO BORING HERE W/O U.

SEXYSPORTSBABE:
MOM MADE ME GO 2 SUPER-CUTS. THEY SCALPED ME. I’M WEARING MY GRANDFATHER’S FEDORA. GOT ANY COOL CAPS?

MASSIEKUR:
NO WAY! CAPS ARE OUT.

BIGREDHEAD:
I GAINED 3 LBS OVER BREAK. AM FATTER THAN SANTA.

BIGREDHEAD:
THE FOOD IN TONGA SUCKED. THE ONLY THING TO EAT ON THE ISLAND WAS FRIES W/ TARTAR SAUCE. UNLESS OF COURSE YOU LIKE FISH WITH THE HEADS STILL ON THEM.

BIGREDHEAD:
THIS YEARZ GONNA SUCK. I THINK I CAUGHT A COLD ON THE PLANE. SICK PEOPLE SHOULD NOT B ALLOWED IN 1st CLASS.

BIGREDHEAD:
COULD B WORSE. I COULD B CLAIRE. HOW DID SHE TAKE THE NEWS ABOUT CHICAGO?

MASSIEKUR:
SHHHHH! SHE DOESN’T KNOW YET.

SEXYSPORTSBABE:
BTW, HOW DID CLAIRE TAKE THE NEWS?

She was interrupted again by Alicia’s.

HOLAGURRL:
DID CLAIRE MOVE TO CHICAGO YET?

The three pea-sized silver bells that hung from Massie’s cell phone antenna clanged together as she speed-dialed her best friends. This conversation was way too classified for IM.

“Are you insane?” Massie barked once all four girls were on the phone. “Claire could have been sitting right beside me.” She looked to make sure her door was closed before continuing. “I told you never to talk about Claire and Chicago until the story goes public.”

“That’s a word jumble,” Kristen said, as though it were obvious. “I was so bored over Christmas break I finished eleven word jumble books. I like them much better than crossword puzzles.”

Massie flicked one of the bell charms with her thumb. “Huh?”

Massie could practically hear her proud smile through the phone, her perfect white teeth gleaming and twinkling against her tanned skin.

“Yes way!” Massie replied as quickly as she could. Alicia wasn’t the only one who could speak jumble. “Mr. Lyons is breaking it to the families tonight at my dad’s country club.”

“How do you know all of this?” Dylan demanded.

“Claire’s younger brother, Todd, feeds me secret information. All I had to do was buy him the new Atari Anthology. Now he tells me everything he overhears.”

“No fair, I want a Todd,” Alicia whined.

“Gawd, how did you keep the secret the whole time you were in Aspen together?” Kristen asked. “You two are sooo close. I thought it would have slipped out eventually.”

“It wasn’t easy,” Massie explained, ignoring Kristen’s sarcasm. “But I didn’t want to ruin her trip.”

“Awww, how sweet of you,” Dylan cooed insincerely. Then her tone became stern and serious. “But maybe she’d be better off in Chicago. And then things could finally get back to normal around here.”

Massie ran her fingers through her dark glossy hair and sighed. “What are you trying to say?” she asked, even though she knew the answer.

“Nothing,” Alicia said, trying to keep the peace. “They’re not saying anything.”

“Listen,” Massie said, “the Lyonses have been living in my guesthouse since September, and it’s pretty much sucked. No one knows that more than you guys. And now that Claire and I have finally decided to stop making each other miserable, you’re all upset. I don’t get it. I thought you’d be happy for me.”

“We’re glad you’re not making each other miserable, but did you have to become BFFs?” Dylan said, and then blew her nose.

It was obvious Kristen, Dylan, and Alicia were jealous. And Massie wasn’t in the mood to deal. She took a deep breath and, when she exhaled, let all of her friend-stress go. The last few months had been so full of fighting, and Massie desperately wanted the new year to be fun.

Objetivo 4 by German Castro Caycedo
The Englisher by Beverly Lewis
MySoultoSave by S W Vaughn
Deadly Cool by Gemma Halliday
Blood of the Maple by Dana Marie Bell
The Hot Zone (A Rainshadow Novel Book 3) by Jayne Castle
Dead Beautiful by Melanie Dugan
Buffalo West Wing by Hyzy, Julie
The Death of an Ambitious Woman by Ross, Barbara
The Silence of the Chihuahuas by Waverly Curtis
Our partner