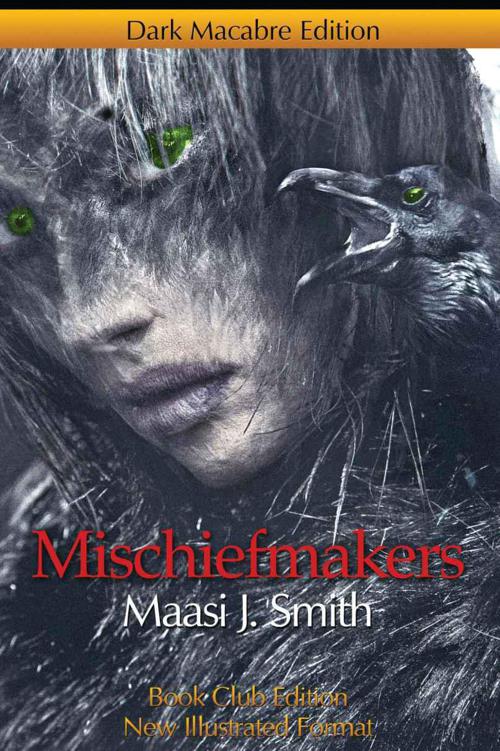 Without limiting the right under copyright 1996, 2001, 2013,
no part of this publication may be reproduced, stored,
or introduced into a retrieval system or transmitted in any form
or by any means electronic, mechanical, photocopying, recording,
or otherwise without the prior written permission of the
copyright owner. (
Dr. Maasi J. Smith
)

Dark Macabre Edition
of
Mischiefmakers
is meant to provide a visual
perspective to the story line. I love the frightening aspects of
the original
Mischiefmakers
, but I wanted to make it better, more
intense. The new cover, author discussion and the visual format
will allow the reader to have an experience not offered by many
books.

This book is a labor of love and is dedicated to my family and
friends who have given their time and encouragement. I sincerely
thank all of you.

Excitement & Chills!!
If you’re looking for suspense, excitement and chills, then
Mischiefmakers is the book for you!!

A Suspenseful Spiritual Tale
I consumed “Mischiefmakers” as if it was a bottomless box
of popcorn.

4 out of 5 stars A Spine Tingling Tale
Don’t let the small size of this novel fool you; Mischiefmakers is packed full of horror and spine tingling scenes that will
make you read swiftly wanting to know who will die next,
and whether good will win out over evil.

5 out of 5 stars well written,
I thought the book was well written. It was a pleasure to read.
I hope to see more of the authors works, soon.

5 out of 5 stars Sick!
This one is hard to swallow. My group and I could not help to
concede that even though the author is nuts he is extremely
talented.

Not for the faint of heart!!!,
Eyes glowing in the dark and dreams that haunt the main
charater, Melissa, when she is awake. So much so, that you
cannot read it and go to sleep afterwards, (for me anyways).

he Souls shall rise from brutal chaos. Seas will overflow, the
ocean will blacken. Tides will rest upon the shores, bringing death. The world will shatter as kingdoms fall. He with

His begotten Son reached for an embrace, as demons cry tears of
blood, soaking the land, desecrating the peace. Oh God, we miss
your warm embrace. We are frozen motionless in the depths of
Hell. For He who has promised salvation has lied. He has brought
us pain and misery. God, may we pray for acceptance into your
Kingdom, or have you forsaken us? We ask, for we have lost our
way and are growing weary of death.

You know us, Mischiefmakers. As Man weeps for loved ones,
we stand beside him laughing at his pain. Hope is your weakness,
despair is our power. Devouring your soul will leave you broken.
Archangels descend to the Earth as their hoards of winged beasts
scorch the world. You will burn until your ashes float in the turbu-
lent winds. Asylum of Omen will open.

Set aflame the wings of angels as their bodies fall from the
clouds. This world shall overflow with Souls. At the end the land
will have her fill. Soon Man will find himself struggling to breathe,
as Souls require strength and will rip what they need from Man’s
essence. The wind, souls passing, touching your flesh for the
desire for life is powerful. Black rain, our tears of pain, and from
the shattering of the land, we will rise.

Do not sail in rays of the bright star, for it is the pathway to
Hell.
The child bore from a sinful soul will give us strength. We will
kill everything and rule beside the dark one. His six beasts will
come forth carrying horns of gold. With his emerald eyes, he will
deceive you.
Asylum of Omen will open.

ewark is no place to be homeless on a rainy night. Hell, any
night in Newark can be bad, but in the middle of a thunderstorm with a box for cover is as bad as it gets.

Electricity disperses throughout the dark clouds, choking the
night sky, clearing city streets. The rugged raindrops only temporarily wash stubborn dirt and the stench of urine away. There will
be no sleep tonight as the roar of Path trains from Penn Station
and God’s own hands combine to produce thunderclaps fierce
enough to wake Hell’s gatekeepers. Forceful winds move purpose-
fully past, slowing New Jersey Transit to a careful crawl.

The homeless cuddle within their makeshift homes erected
from cardboard and last Sunday’s Star Ledger. Still bodies, wet and
cold, pass bottles of Thunderbird down the row.

The air is tight and muggy as the rain slows. Its breaking makes
the vast skyline of lower Manhattan clearer. The World Trade
Center is only partially visible as a thick mist encircles its top
floors. Strong humid odors lay heavy in the air with a tenseness
unfamiliar even to this village of misfits.

Roaring thunder startles pedestrians unlucky enough to be
caught out on this night. They navigate seemingly deep puddles
now formed along Broad and Market. The storm has killed all the
corner lights. Only nature’s highlights dash and dance across the
heavens.

Rich with its Portuguese tradition and camaraderie, this Iron
-
bound section of Newark is reduced to a desolate place with
quiet front porches. On this block, the rain falls faster, paying special attention to a building located on a lonely corner. The old
firehouse has been abandoned for years. Shattered glass lies every-
where. Support beams have long since outlived their usefulness.
Filthy floors welcome rats and roaches. A rancid odor of unclean-
ness, decaying material, and human waste overwhelm the senses.
The sound of trickling raindrops echoes throughout the abandoned halls. A gray haze covers the floor and gravitates toward the
stairway like a snake that has lost its way.

Behind a dilapidated door, barren floors carpeted with filth and
animated with vermin become a makeshift bed as playful sighs
break the darkness.

“I want you so much,” he says.
“The storm...I’m scared. It sounds bad out there,” she responds.
“Why be scared of the rain? Only two things to do in this kind

A Pair of Jeans and other stories by Shahraz, Qaisra
Ellie Quin Book 2: The World According to Ellie Quin by Alex Scarrow
The Naked King by MacKenzie, Sally
Charity Received by Ford, Madelyn
Kill Me by Alex Owens
Amy “Red” Riding’s Hood (Adult fairy tale erotica) by Adams, Liz
Called by the Bear 4-6 by V. Vaughn
This Monstrous Thing by Mackenzi Lee
Beauty Ravished by Celeste Anwar
Mercedes Lackey - Anthology by Flights of Fantasy
Our partner