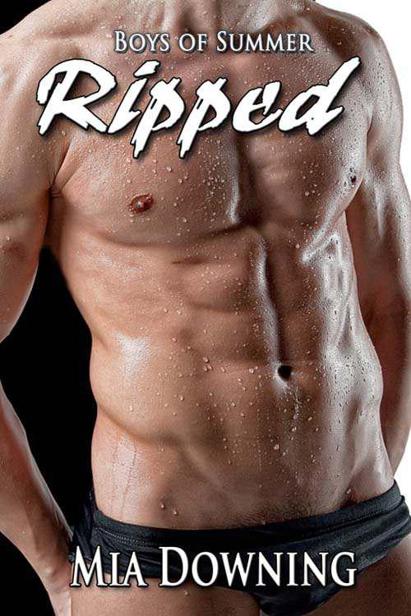 Thank you for purchasing this Wild Rose Press, Inc. publication.

For Stacey R, Lisa, and Lucy, for cheering and reading when this book felt anything but safe.

For The Hive, for being my safe haven, unconditionally and always.

For Diana, my editor, with her own brand of safe ensconced in leather and whips.

We all have stuff in our childhood that haunts us. This book is for those of you who had the scary, haunted house version of a childhood. I hope you’ve found your safe haven. I finally have.

“Mia Downing managed to touch on a subject that is incredibly tense and executes it perfectly. I thoroughly enjoyed this read as it had everything going for it.”

“Ms. Downing created a realistic relationship between Megan and Adam that shows that love really does conquer all. EXCEEDING BOUNDARIES is a very good read with multiple surprises that I'm sure you will enjoy.”

“I liked these two and found their collective reticence to commit to each other quite believable, once their backgrounds emerged in
EXCEEDING BOUNDARIES
. Lots of conflicts, differing goals and aspirations are explored and evolved, as Downing gives us a committed love story that rises from the ashes of the two souls who must re-invent themselves in order to love.”

Erik Clarke waited patiently on the picnic table under the pavilion as lifeguard Gavin White lorded over his loyal, beach-going subjects, a bronzed king on his throne. Aviator sunglasses hid those expressive brown eyes, and a red baseball cap covered his short, dark hair. Gavin glanced at his watch, removed his cap, and pulled a red sleeveless tee over his head, hiding a bronzed chest.

Erik often came to the beach when Gavin worked to spy from afar. He liked it when Gavin started to sweat in the mid-day sun, the beads rolling over sculpted lines in his flesh, his skin glowing and shiny. Gavin would go down to the water and jump in quick, that jet black hair slicked back, his red board shorts molded to his form, dipping into the creases of his groin, clinging to his thighs. It was a fantasy of Erik’s, one he’d jacked off to so many times since they turned eighteen and Gavin had started lifeguarding at their tiny, Connecticut town beach every summer.

Gavin at twenty-four was way different than Gavin at eighteen. This Gavin made Erik’s heart ache in ways the eighteen-year old never had. He was taller, broader, more handsome. Slower to smile, the shadows in his eyes harder to chase away. That darkness lingered now, his expression brooding, his shoulders tense. It had nothing to do with the recent shark sighting, either.

Why the hell was Gavin here, today of all days? Erik wanted to drag him off that stand and back to Gavin’s studio where he could paint, cast his soul on canvas so he could release the tension cording his shoulders.

Gavin was an amazing artist. Until last month, Erik had been his favorite model, and he’d been captured on canvas in a variety of poses, making him look way more attractive than he was in person. Gavin’s love for the male form was evident in each work, and he had remarked how he loved the hard, sculpted flow of male muscle, so different from softer, female bodies. That had surprised Erik at first, because shouldn’t straight guys want to paint women? Maybe.

The last painting had been a nude of Erik. All that nudity and closeness to Gavin had done bad things to Erik’s libido and in a bold, really impulsive, move he had kissed Gavin. Hard. On the mouth. Gavin had kissed him back. Hot and heavy, frantic with tongue in the best fucking kiss ever. But Gavin had freaked. Things had been strained since then, and it killed Erik that he couldn’t have controlled himself better. He loved Gavin on so many levels. And he missed him.

Today wasn’t about the kiss, though. He was here for Gavin. As a friend, to help keep him sane.

There weren’t tons of subjects for Gavin to lord over, seeing as the sun was dropping down and the beach goers were retreating with armloads of towels, bags, chairs, and umbrellas. Erik waited by the soda machine in the pavilion because Gavin always got a can of cola before he left for the evening, his one indulgence for putting up with screaming kids and nagging mothers all day long.

Gavin glanced at his watch then back at the water, free of swimmers. He climbed down, his biceps flexing and rippling, those thighs strong. Erik tensed. Gavin had to be close to the breaking point, his emotions like soda shaken in a can, ready to explode when the top was popped. Erik would gladly suffer whatever Gavin felt, so he didn’t have to do it alone.

“Erik.” Gavin halted in the doorway of the pavilion, frozen like a statue of a Greek god in living color. He removed his sunglasses. Deep brown eyes flared with excitement, in direct opposition to the frown curving his firm lips downward. A muscle in his jaw twitched, his teeth clenching down as his lordly gaze swept Erik’s form.

“Hey.” Erik sat on top of one of the picnic tables, elbows on his knees, hands clasped between his thighs.

“You’re not here to scope out the tanned bods, are you?” he joked, but his gaze darted away, worried. Almost fearful.

Gavin grunted and took a dollar from his pocket, turning to the soda machine. The money disappeared, and lights glowed in the growing darkness. “I’m not taking new models right now, if you’re wondering. I’ve been doing some work from photos I took last summer.” He smacked the button of his choice.

“You know that’s not what I want,” Erik said, keeping his voice soft and patient. This wasn’t about the kiss, damn it. He refused to let the kiss keep him from Gavin on the day when he needed a friend most.

Gavin grabbed the soda from the machine and turned slowly. His Adam’s apple bobbed, his eyes widening. “You weren’t supposed to remember.”

Gavin closed his eyes and drew in a deep breath, exhaling in a loud whoosh. “Thank you.”

It wasn’t at all what Erik expected to hear, not from the smartass, not from the guy with all the macho answers. But deep down, beneath the layers of bravado and strength was a guy who ached to hold his sister again.

“How could you work?” Erik asked. “I thought you’d be with your parents.”

Gavin’s laugh was bitter, his brown eyes cynical. “How could I
not
work? I couldn’t go back home and watch my parents become basket cases all over again, feeling like a huge piece of shit on someone’s heel.”

“It wasn’t your fault.” Gavin and his sister had been hit by a drunk driver three years ago, his sister killed instantly. Gavin had been driving. Today was the anniversary of Angela’s death.

“You didn’t do a damned thing. You did as your parents asked. You drove carefully. You were sober.”

“The one day I was sober, I get punished for it.” Gavin’s voice was so low and raw Erik almost missed his admission.

“Is that what you think? Jesus, that’s fucked up.”

“Is it?” Gavin raked a hand through his spiky hair, giving the ends a ruthless tug. “The one day I’m sober—yeah, I was hung over—but I was clean. No drugs, no booze. Clear-headed, driving like my grandfather across town. I even had my seatbelt on. Every single fucking T crossed, every I dotted, and I still manage to get her killed.”

“Not your fault,” Erik whispered, feeling it was his fault, too. He had tried to save Gavin from the drugs, the alcohol. He sat up and patted the table top next to him. “Come. Sit.”

Gavin responded to the direct command, dragging his feet to sit next to Erik. He smelled of ocean salt and coconut suntan oil, the stuff that was bad for you in a skin cancer way and made you think of tropical vacations.

Gavin was close, so close, the length of his thigh brushing Erik’s as he assumed a pose he’d painted Erik in, only there was nothing sexy or contemplative about his position. His hands gripped each other so hard the knuckles were white. Strong, wide shoulders rolled forward, the bare skin of his arms deeply tanned. He dropped his head and touched his forehead to those white knuckles, his eyes closed.

“I’m here, you know,” Erik soothed and tentatively put a hand on Gavin’s shoulder, his skin hot, the muscle rippling under his fingers as Gavin leaned into his touch. “You’re not alone, and I’m not judging.”

“I know.” Gavin lifted his head and met Erik’s gaze, his eyes tortured. “I just need to keep busy. Stay away from my parents, find something to occupy myself so I’m not drinking and lighting up again. I’ve been clean ever since, but today is the day when I just want to sink, you know? That feeling is worse this year. She would have been twenty-one.”

The American Mission by Matthew Palmer
Theodosia and the Serpents of Chaos-Theo 1 by R. L. Lafevers, Yoko Tanaka
Patricia Rice by All a Woman Wants
Kobe by Christopher S McLoughlin
Maclean by Allan Donaldson
Zompoc Survivor: Exodus by Ben S Reeder
Maple Mayhem (A Sugar Grove Mystery) by Jessie Crockett
The Pulse: A Novel of Surviving the Collapse of the Grid by Williams, Scott B.
Irrefutable Evidence: A Crime Thriller by David George Clarke
The Blue Girl by Charles De Lint
Our partner