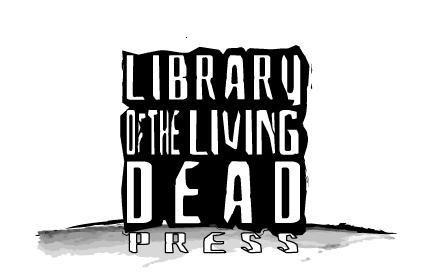 Without limiting the rights under copyright reserved above, no part of this publication may be reproduced, stored, or introduced into a retrieval system, or transmitted in any form, or by any means (electronic, mechanical, photocopying, recording, or otherwise) without the prior written permission of both the copyright owner and Library of Horror Press , except in the case of brief quotations embodied in critical articles and reviews.

This book is a work of fiction. People, places, events, and situation are the product of the author s imagination. Any resemblance to actual persons, living, dead or undead, or historical events, is purely coincidence.

From The Publisher
I was fortunate enough to meet Derek J. Goodman (aka NapalmChicken don t ask) on the Library of the Living Dead Forum . What started as a forum for the podcast evolved into a forum for writers. And yes indeed, Derek is a writer! I was publishing zombie novels under the Library of the Living Dead Press imprint and non-zombie horror under the Library of Horror Press imprint. Derek wondered if perhaps I d be interested in a comedy of horrors type novel. And I was. And here it is. And it will knock your brains out.
Comedy and horror make for a wondrous combination, if they re done properly. Some of my favorite movies are comedy/horror movies. Dead/Alive , Evil Dead 1 & 2, Army of Darkness , Bad Taste and Shaun of the Dead . Then of course there are the classics like Comedy of Terrors with Vincent Price, Boris Karloff and Peter Lorre. Which by the way was written by my favorite author Richard Matheson. But I digress.
It s hard to pull off the combination. Hard as hell actually. A lot of times the book or movie isn t either horror OR comedy it s just smarmy. You won t have to worry about that with Derek s The Apocalypse Shift . It s hilarious horror and creepy comedy. You re in for one helluva treat.
Undead love to all,
Doc
Chapter 1

People called that section of the city the Hill. During the day it was just a large neighborhood with shops and industries that catered to the alternative sets, and it more-or-less thrived. But at night the neighborhood changed. Every resident of the Hill knew it, even if they only registered it in the primitive chimpanzee part of their brains. The sun set and all doors got locked, all blinds were closed, and religious symbols were hung in conspicuous places. Those who went out after sundown were heavily armed and fleet-footed, going about their business before the things in the night knew there was something out there to catch. At night on the Hill insanity gained physical form.

At the center of the Hill, though, there was a place of refuge, a place of safety. Those who watched over it had to be stout of heart and true of spirit. They were the bane of the night things and the heroes of humanity.

Except, of course, for the one who was screaming like a little girl.

Eeee! Lucas dropped his sword and crouched with his hands on top of his head in a semi-fetal position as another arrow of flame spewed over his head and crashed against the brick outer wall of the OneStop Mart.

Idiot! Pick up your fucking sword! Caleb screamed at him. We need all three! He was barely able to get the words out of his mouth before the creature once again swooped down out of the darkness, sucking enormous amounts of air into its lungs as it prepared to attack with another volley of napalm breath. The prophecy had called it a creature of fearsome strangeness, but Caleb didn t think it that strange at all. Sure, other clerks on the night shift at other convenience stores might have to look twice at a giant fire-breathing bat-winged armadillo, but to Caleb it was just another night at work.

Caleb waited until he could see flames forming at the corner of the creature s lips, then ducked and rolled. The fire scorched the place where his head would have been and the creature, trying to adjust its trajectory at the last moment, flew lower than it should have. Hoping that the thing s anatomy was similar to a normal mammal s, Caleb thrust his sword up between the bony armor plates on its chest where the heart should be. The armadillo-thing screeched and almost fell out of the air before it regained some altitude, the sword still sticking out of its chest and blue-black blood leaking from its wound. Caleb gave a primitive war-whoop. That had to have been a heart-shot. Now they just needed to get a sword into each of the other two.

Phil, the third clerk on duty tonight, whistled at the thing, and Armadillozilla turned sharply in the air, searching for the source of the noise. It had to be colorblind, since it apparently couldn t see the tall African-American man in a bright blue OneStop smock standing right beneath it.

Try waving your arms! Caleb yelled, but he turned away before he saw if Phil took his advice. Phil had been working at the OneStop Mart for six months now and had proven himself capable on more than one occasion. Now Lucas, however

Caleb stalked over to where Lucas was cowering near the store s glass front door. The acrid scent Caleb smelled as he got closer was enough to tell Caleb that Lucas had wet his pants.

Lucas, Caleb said. Lucas responded only by staring into space. Caleb snapped his fingers and Lucas finally looked at him, his expression dull and stunned.

Lucas, what did I tell you before? Caleb tried to keep his fury from coming out in his tone. This was something he was never able to get used to, despite having worked the graveyard shift- or the Apocalypse Shift, to those in the know- at OneStop for over two and a half years. The employees always freaked for the first two days. It was understandable, Caleb guessed. He d been weirded out in his first few days, too. And even now that the manager had some understanding of what went on after hours at her store she still couldn t exactly mention it in the wantads.

OneStop Mart seeking full-time employee for third shift. $8 an hour starting. Experience fighting brain-sucking zombies and ancient evil demigods is a plus. Apply at the 13
th
and Pearl location.

No, as long as the larger world continued thinking such things didn t really happen it just couldn t work like that.

The armadillo screeched from somewhere behind Caleb, but he didn t turn to look. Lucas jumped at the noise, but at least he was starting to stand back up. Answer me, dude, Caleb said.

What did I tell you?

Ramona and Her Father by Beverly Cleary
February by Lisa Moore
All that Glitters (Stavin DragonBlessed Book 1) by Loren K. Jones
The Cyclops Conspiracy by David Perry
The Drifters by James A. Michener
The Mammoth Book of Erotica Presents The Best of Saskia Walker by Saskia Walker
Nothing Like It in the World The Men Who Built the Transcontinental Railroad 1863-1869 by STEPHEN E. AMBROSE, Karolina Harris, Union Pacific Museum Collection
The Last Kingdom by Bernard Cornwell
Renewing Lost Love by Karen Ward
Ana Seymour by A Family For Carter Jones
Our partner