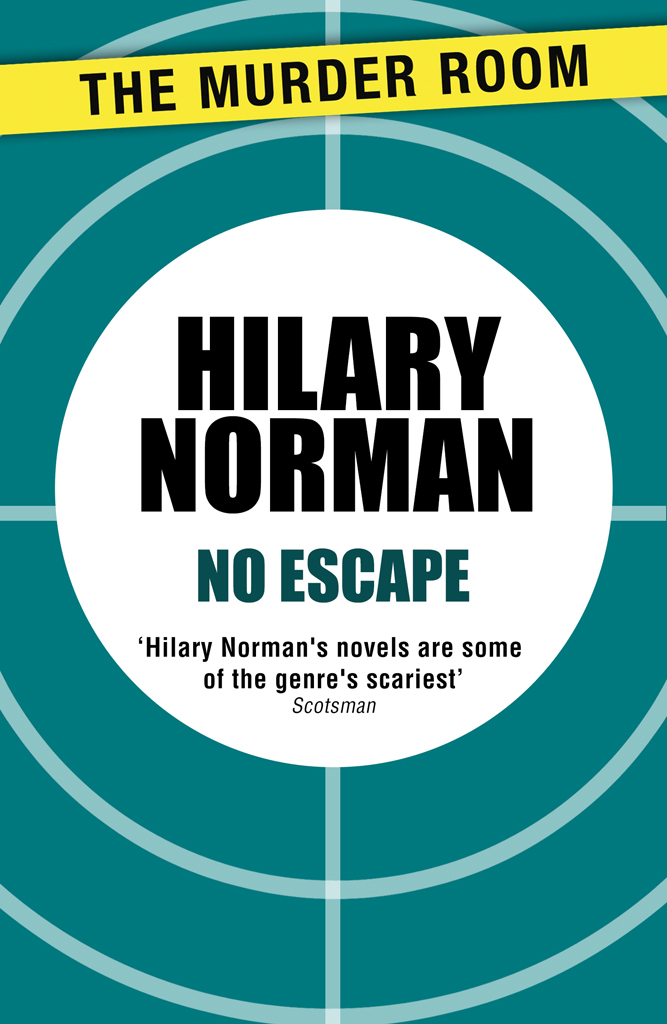 Hilary Norman and The Murder Room

›››
This title is part of The Murder Room, our
series dedicated to making available out-of-print or hard-to-find titles by classic crime writers.

Crime fiction has always held up a mirror to society. The Victorians were fascinated by sensational murder and the emerging science of detection; now we
are obsessed with the forensic detail of violent death. And no other genre has so captivated and enthralled readers.

Vast troves of classic crime writing have for a long time been unavailable to all but the most dedicated frequenters of second-hand bookshops. The advent
of digital publishing means that we are now able to bring you the backlists of a huge range of titles by classic and contemporary crime writers, some of which have been out of print for
decades.

From the genteel amateur private eyes of the Golden Age and the femmes fatales of pulp fiction, to the morally ambiguous hard-boiled detectives of mid
twentieth-century America and their descendants who walk our twenty-first century streets, The Murder Room has it all.
›››

Chapter One Hundred One

All through the last week of February, the body lay beneath a pile of sacking on the floor of a neglected shed on an allotment near Claris Green in the London borough of
Barnet. Less than a year ago, this tiny plot of land had boasted plums, tomatoes, strawberries and seasonal flowers, but then the allotment holder had died, and in the lengthy wait for a new tenant
the plants had withered, become choked by weeds and threaded with cobwebs, and one wall of the shed had been smashed by vandals using it for sport.

It being late winter, with no new holder yet in prospect, the body had thus far remained undiscovered for eight days, though one large, smooth, speckled pebble, chucked through the broken planks
of wood by a hooligan with time on his hands, now rested on the sacking directly over the dead woman’s left thigh.

The discovery, when it was finally made, would horrify and sicken whoever had the misfortune to stumble upon it. However advanced the state of decomposition of the corpse by then, identification
would swiftly be made, for Lynne Frances Bolsover had been reported as a missing person by her husband seven days before, and with no reported sightings since then or usage of her VISA card,
concern for her safety had begun to mount. Besides which, while Mrs Bolsover’s black leather Marks & Spencer handbag (placed by her killer in a wheelie bin on Franklin Road, less than a
mile from the allotment) would never be found, Lynne was still dressed in her Next red pullover and blue jeans with a Siamese cat patch on their right back pocket, and those clothes, supported by
the missing woman’s dental records, would smooth the way for the police.

Though not, of course, the Bolsover family.

The pathologist would, in due course, confirm that the twenty-nine-year-old wife of John Bolsover and mother of Kylie, aged six, and Alex, aged four, had died from a massive brain haemorrhage
after her skull had been fractured by three blows to her head. The murder investigation already launched by the Metropolitan Police’s Area Major Investigation Team, North West, would pick up
a full head of steam – and would, in all probability, be rapidly solved. For the AMIT NW detectives would soon learn that, hoping to alleviate Lynne’s prolonged depression after an
abortion a year earlier, her GP, Dr Deirdre Miller, had recently prescribed Prozac; that staff at a health shop half a mile from the Bolsovers’ semi-detached had often supplied the deceased
with arnica for bruising; that, according to Pam Wakefield (Lynne’s sister) and Valerie Golding (her next-door-neighbour), Lynne had frequently been bullied, yelled at, and almost certainly
hit by John Bolsover, her husband; and that – this from sister Pam – it had been John who had insisted on the termination that had so depressed his wife.

It was likely that Bolsover would be interviewed several times before being arrested and charged with her murder.

Though he would never confess.

Because he was not guilty.

Everyone said, regularly, that Lizzie Piper Wade was a very lucky woman.

‘Except for poor Jack, of course—’ those who knew about her middle child’s Duchenne muscular dystrophy would quickly add ‘—though God knows even that has to
be a little easier for her than for other women.’

‘Other women’ meaning those with the misfortune not to be married to Christopher Wade.

Life had taught Lizzie about counting blessings, and she had learned over the years, despite the cruelty of Jack’s diagnosis, to be grateful for many things. She was grateful for
Jack’s courage and humour, for his intelligence and self-esteem, and, perhaps most vitally, for his unshakable confidence in his family’s great love for him. She was boundlessly
grateful that twelve-year-old Edward and Sophie, seven in March, were both healthy – though time and testing, perhaps in her teens, would yet tell whether or not Sophie was a carrier of the
gene defect that had afflicted ten-year-old Jack.

She was grateful for her work.

‘How important—’ a journalist interviewing her for one of the Saturday supplements had asked her a year ago ‘—would you say your career is to you, in the general
scheme of things?’

‘I know I’m lucky to have it,’ Lizzie had answered. ‘Lucky to be able to cook and eat and drink, and write about it
and
get paid for it.’

She’d gone on, as she usually did, about her good fortune, saying that though she did actually work fairly hard, it was sometimes difficult to think of what she did as real
‘work’. But she had not given the answer that lay uppermost in her mind: the most truthful answer.

Flashpoint by Suzanne Brockmann
The Lost Bird by Margaret Coel
A Twisted Bard's Tale by Selena Kitt
Magical Passes by Carlos Castaneda
Club Fantasy by Joan Elizabeth Lloyd
The Watchmaker's Daughter (Glass and Steele Book 1) by C.J. Archer
House of Strangers (Harlequin Super Romance) by McSparren, Carolyn
Echoes Of A Gloried Past (Book 2) by Ken Lozito
The Pink and the Grey by Anthony Camber
Broken by Jordan Silver
Our partner