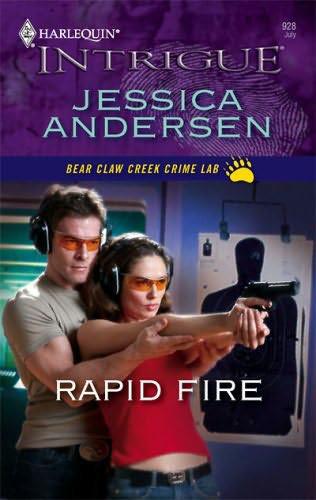 Maya Cooper
—Suspended from the Bear
Claw Crime Lab, the psych specialist is alone in believing that a local
philanthropist is responsible for the crime wave currently terrorizing Bear
Claw City. Her only ally is a dangerous man from her past.

Thorne Coleridge
—Some
cops say he has “powers.” Others think he’s a brilliantly intuitive profiler.
Thorne himself knows two things about the current case: one, Maya is the only
woman who can save him from himself, and two, loving him could mean her death.

Wexton Henkes
—The
local legend stands accused of heinous crimes. How far will he go to protect
himself?

Alissa Wyatt & Cassie Dumont
—The
other members of the Bear Claw Crime Lab try to protect Maya by shutting her
out of the investigation.

Detectives Piedmont & Montoya
—The
partners have been openly hostile to the three women of the new crime lab.

Nevada Barnes
—The
museum murderer tries to cut a deal from prison. Can he be trusted?

Chief Parry
—Bear Claw’s police chief
is under huge pressure to catch the criminal mastermind. When a suspended cop
becomes the fiend’s next target, will he bow to pressure and use her as bait?

Drew Wilson
—When two police sketches
help identify him as a suspect, he will do anything to avoid capture.

He stood
on a bluff overlooking green summer pastures and raised a pair of binoculars to
his eyes as the morning sun climbed above the opposite ridgetop.

The
target lay in the valley below, a jumble of Hollywood-false Western buildings
and swirling bison herds. It would be so easy this time.

At the
beginning, when he’d first conceived his revenge, he’d thought of himself as
the planner. The cops had christened him the Mastermind, because he’d so
carefully organized his strategy and found men to do his bidding. Bradford
Croft had been pliable, with a fondness for young girls that had made him easy
to direct. Nevada Barnes had been less malleable. More angry. More dangerous.
But he, too, had his weaknesses.

Croft was
dead now and Barnes was in jail, but the plan lived on. Divide and conquer.

The
Mastermind tightened his fingers on the binoculars as a school bus lumbered
into view below, passing beneath a swinging sign that promised authentic Wild
West entertainment.

Children
spilled from the bus and their shrill, excited voices filtered up to his
vantage point. Then the adults emerged, moving more slowly, thinking themselves
safe. The Canyon Kidnapper was dead and the Museum Murderer—an epithet he
blamed solely on the media—was in jail. The citizens of Bear Claw, Colorado,
thought the danger was past.

They had
no idea it was just beginning.

Wearing
jeans and a fitted blue T-shirt on her lean, five-foot-nothing frame, with her
dark hair tucked beneath a straw hat and a canvas bag slung over her shoulder,
Maya Cooper looked every inch the tourist she’d intended to portray. But
inside, she was all cop as she scanned the swept-clean brick roadway that ran
down the center of the faux ghost town outside Bear Claw City.

Her
training as a criminal profiler told her she was reaching, but her gut told her
she was on to something.

She was
positive the Chuckwagon Ranch was connected to the sick bastard who’d planned
two separate violent crime sprees over the past six months.

Wexton
Henkes, part owner of the theme park, was a Bear Claw legend. Born in the city
and raised up through the school system, he’d taken his father’s one-room
electronic repair shop and built it into an empire. Once he’d made his first
million—or ten—he’d started giving back to the city that had brought him his
success. He’d funded everything from civic projects and art revivals to nature
conservation and the local sports teams. In short, he was a prince.

On the
outside, at least. Inside, Maya was convinced he was something else entirely.
He’d broken his own son’s arm three months earlier—nobody could tell her
different—and he was poised to duck the abuse charges because he had money,
power and influence.

Enough
influence to get her in serious trouble the last time she’d gone after him.

“But not
this time,” she said aloud, earning herself strange looks from the passing
tourists.

The June
morning was warm and bright, perfect for a family trip. The Wild West theme
park was cut down the middle by Main Street, a wide brick causeway flanked with
false-fronted buildings that had been painted to look like a saloon, a general
store and a livery. Tourists streamed into and out of the buildings in a chaos
of movement and sound that made it almost impossible to pick out individuals.
On either side of the buildings, bison-dotted pastures stretched for miles,
taking up most of the shallow, hill-bounded bowl of land.

Maya
scanned the low ridgetops that flanked the road and saw nothing. A faint
feeling of wrongness prickled at the nape of her neck, a familiar sense of
being watched. Of being alone.

But damn
it, she was alone. She’d been suspended from the Bear Claw Police Department
pending an inquiry into the incident at the Henkes mansion three months
earlier.

Anxiety
pressed at her, echoing her heartbeat in the low-grade headache that had
plagued her ever since she’d awoken in the Hawthorne Hospital with a knot on
the back of her head and no memory of attacking Henkes in his own home.

But that
was what she’d done. Or so they said.

What if
they kicked her off the force? Maya’s throat closed at the thought. She was
already on the outside of the Bear Claw City Police Department—BCCPD—looking
in. Alissa Wyatt and Cassie Dumont, her best friends and coworkers within the
start-up Forensics Department, had tried to include her in the gossip, but they
were run ragged shouldering her work as well as their own.

The new
three-woman forensics team was struggling to gain acceptance within the Bear
Claw PD as it was. What if—

No, Maya
told herself, she wouldn’t dwell on that. The previous night she’d finally
decided it was time to stop with the futile attempts at self-hypnosis, the
painful efforts to force some remembrance of that night at the Henkes mansion.
It was no use. The memories were gone, and she had an ugly feeling she knew
why.

She
touched a hand to her throat, where her charm necklace held five bangles. There
should have been six more, but she’d lost them to a mistake. To temptation.

Would she
lose the remaining five charms as well?

What if
she had to start over again?

“No,” she
said aloud. “I’m stronger than that, and I’m damn well going to prove it.
Starting now.”

As though
on cue, her cell phone rang, a digital bleat that cracked through the
background hum of tourism. Not expecting a call, Maya slapped open the unit and
checked the number, but the ID was blocked.

Annoyed,
she flipped the phone shut and dropped it in the front pocket of her canvas
bag. These days most of her calls came from media hounds looking for quotes on
the dismissal of the Henkes child-abuse trial, or supporters of Wexton Henkes
himself calling to threaten her, somehow still believing the bastard had a
solid shot at the upcoming Congressional election. She didn’t need to talk to
either group.

Focused
on her own special way of doing the job—more organic than straight detecting,
more regimented than pure profiling—she followed the flow of tourists toward
the livery building, which held a petting zoo.

She
wanted to get a feel for the theme park and the man who’d bankrolled it.

Inside
the building, rough-hewn boards and crooked center beams gave the sense of an
old, rundown barn, though a closer look showed her that everything was neat and
new, and painted to look old. The place was packed with excited children, along
with adults wearing expressions that ranged from enthusiasm to exhaustion.
Small goats and lambs wandered a straw-bedded center pen, begging for handfuls
of pellets that could be bought from quarter-operated machines on the wall. Box
stalls on either side were set up to hold larger animals, though only one was
occupied, holding a shaggy bison that looked close to five feet tall at the
shoulder and probably weighed in well over a thousand pounds. Its short, curved
horns were dulled at the ends, but that did little to blunt the physical impact
of the creature as it snorted and stomped in its enclosure.

Maya
noted the people and animals, then turned her attention to the building. She
wasn’t even sure what she was looking for. A sense of the place, maybe, or
insight into the man who had financial ties not only to the ranch, but also to
the state park where Alissa had found the kidnapped girls during the first
crime wave, and to the Bear Claw Natural History Museum where Cassie had nearly
lost her life in the second.

During
her terrifying ordeal in the museum, Cassie had heard the computer-altered
voice of a third man, one who called himself the planner.

He had
promised more violence to come.

The
members of the special BCCPD task force assembled to deal with the crimes had
vowed to find the Mastermind before he could strike again, but their leads had
fizzled out in the months since. They needed an accurate psychological profile
of the criminal, but their quarry was too many things and none of them all at
once. It was nearly impossible to separate his ego from the works of the men
he’d coerced into executing the actual crimes, but Maya was damn sure going to
try.

The Guardian (Mended Souls Book 1) by Jacquie Biggar
Out of the Fire (Perilous Connections) by Beazer, Delka
A Glimpse at Happiness by Jean Fullerton
Get a Grip (Hollywood Nights) by North, Cara
Remake by Connie Willis
The Long March by William Styron
Chasing Spirits: The Building of the "Ghost Adventures" Crew by Groff, Nick, Belanger, Jeff
Odd Hours by Dean Koontz
Dream Walker by Sinclair, Shannan
New Girl by Titania Woods
Our partner