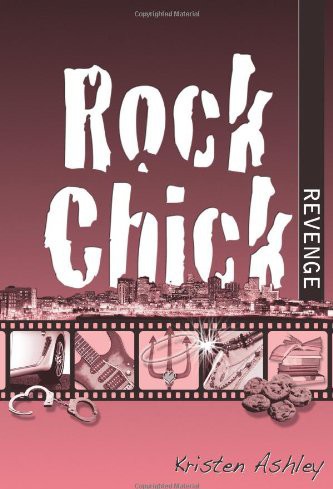 This eBook is licensed for your personal enjoyment only. This eBook may not be re-sold or given away to other people. If you would like to share this book with another person, please purchase an additional copy for each person. If you’re reading this book and did not purchase it, or it was not purchased for your use only, then please return to Amazon and purchase your own copy. Thank you for respecting the hard work of this author.

This book is dedicated to Gib Moutaw,

Keep whistlin’ in the dark, my brother.

Many, many thanks to Kelly Brown, the bestest best friend a girl could have and the best editor anyone could have. Thank you, chickie, for being along for the
Rock Chick
Ride!

I sat in my hunter green Range Rover, hands resting on my steering wheel, forehead resting on my hands, wondering what in the hell I was doing. Not only that I was parked on 15
th
Street outside the Nightingale Investigations offices, where Luke worked, but any of it, all of it, the whole shebang.

Do it, do it, you know you want to do it.
Teeny, tiny Bad Ava, wearing a lacy red teddy, red stockings, spike-heeled, patent-leather red pumps and devil’s ears, sat on my right shoulder and whispered in my ear.

Don’t do it, go home, do yoga, light candles, meditate.
Teeny, tiny Good Ava, wearing a white satin teddy edged in soft, fluffy feathers, gold high-heeled sandals with straps that crisscrossed up her calves and sporting a glittery gold halo, sat on my left shoulder and whispered in my ear.

You aren’t nuts. You want to see him. You’ve wanted to see him for four years. Girl, you are shit-hot now. Let him get a load of you!
Bad Ava reminded me.

This was true (not the shit-hot part, the other parts).

Go home, call Sissy and tell her you can’t do it. Then call Luke and ask him over for dinner like a normal person. Don’t do this. Don’t!
Good Ava said.

Do it, go in there, suck him in, chew him up, spit him out. Men stink!
Bad Ava encouraged.

Luke doesn’t stink. We like Luke,
Good Ava protested, leaning around my neck to glare at Bad Ava.

Men did stink; this was true. Men were scum. All of them. Luke too.

I had known Luke Stark since he moved in across the street when I was eight years old and he was twelve. He was the most gorgeous boy I had ever seen in my little girl life and, when I saw him at his Dad’s funeral five years ago, I realized he had turned into the most gorgeous man.

Now, I was seventy-five pounds lighter, wearing contacts and had my hair streaked blonde (a partial streak just the top and sides, the bottom back I left alone and for some bizarre reason, against the blonde, it had turned a burnished chestnut color that was the same color as both my glamorous sisters’ hair; the hair I had always wanted all my life, even prayed for but never had, until now).

Last time I saw Luke he was wearing all black: black suit, black shirt, black tie. It
was
a funeral but Luke had always been partial to black, and I was glad because he looked good in it, even when he was a teenager he usually wore tight, black t-shirts, black motorcycle boots and jeans. I noted this like I noted everything about Luke. He had black hair and on first glance, black eyes though, his eyes were really a dark, dark indigo and totally yum. At the funeral, I noticed he had grown a beard: not full and thick, but short and trimmed and it looked great on him.

I nearly melted into a puddle when his eyes moved through the graveside crowd, stopped on me, got soft and one side of his mouth went up in one of his half-grins that made him look so yumalicious you wanted to pounce on him. Instead of shoving the mourners aside and pouncing (which would have been highly inappropriate), I just gave him what I hoped was a jaunty wink and a stupid half-wave. The grin went full-fledged (guess the jaunty wink worked, but then again my stupid, dorky behavior always seemed to amuse Luke) and he turned away.

That was the very day I decided to turn my life around and that was the day I turned my life on its fucking head.

I rued that day.

I never thought I would rue anything but I rued that day for certain.

However, now I needed Luke.

I knew from my Mom talking to his Mom (they were still friends even though Luke’s Mom had moved into a condo in Governor’s Park and my Mom had moved to Phoenix), not to mention from Ally and Indy, my Rock Chick friends, that Luke was some kind of kickass mercenary, bounty hunter, private investigator-type guy who worked for Ally’s brother and Indy’s fiancé, Lee Nightingale.

Luke had always been a badass. Two days after he moved in across the street I caught him in the alley smoking cigarettes. He was twelve and smoking in the alley and at eight I thought that was way cool. When he grew up, he drove muscle cars (loud and fast) and motorcycles (again, loud and fast) and sat in his Dad’s garage with the door rolled up, lifting weights. I watched this out of my bedroom window and it was better than anything on television, believe you me. He always had a different girlfriend and you could tell they were all easy but a nun would turn easy at one look at Luke. And he was also always getting into trouble. I heard his Mom telling my Mom about it a lot. He’d been picked up by the cops more than once while out carousing. He was a tough guy in high school and he roared off the day of his graduation after one of his many rip-roarin’ fights with his Dad and became a tougher guy (I heard his Mom… well, you get the drift).

And right now I needed a tough guy.

You go get him, girl,
Bad Ava said.

Before I could chicken out, I got out of the Range Rover and went into the building.

I had serious second thoughts about my choice of clothing the minute I opened the door to the offices of Nightingale Investigations. I thought tough guy, mercenary, bounty hunting private eyes would have shithole offices. Couches with the stuffing sticking out; filing cabinets with wire baskets on top overflowing with papers; dirty coffee cups; debris floating around – stuff like that.

Nightingale Investigations’ reception area was all smooth, gleaming wood paneled walls, expensive leather couches (with no stuffing coming out at all), a huge cowboy print in a heavy, carved-wood frame, a bronze statue of a bucking bronco in the corner and a mammoth reception desk with a state-of-the-art computer on it.

The desk was the only thing in the room not neat and tidy. It was a mess and there was a pretty, older, black woman sitting behind it. She had the biggest Afro I had ever seen in my life and she appeared to be both eating a calzone and painting her fingernails a frosty, raspberry sherbet-type color.

I was wearing seriously faded Levi’s I’d found in a vintage clothing store (and they were
the best
), my black Green Day t-shirt over a white thermal, black flip-flops and my silver. I was a silver freak and that day (as with every day) I was dripping with it, four silver necklaces, five silver bracelets on my right wrist, three on my left, long, silver hoops at my ears and nearly all my fingers had heavy silver rings or bands on them. I’d slopped my hair in a messy knot on top of my head with a ponytail holder and I’d gone makeup free.

I was pretending I had nothing to prove and no one to impress.

I should have worn a dress and heels
and
makeup. Not to mention, done something with my goddamned hair.

“Can I help you?” the lady behind the reception desk asked, breaking me out of my idiot thoughts.

I looked at her.

I hesitated, for a moment, wanting to run then I took a deep breath and said, “I’m looking for Lucas Stark.”

“You got an appointment with Luke?” the lady asked, looking through the total mess on her desk (not that she would ever find anything).

“No, I’m an…” I hesitated again, wondering if I wasn’t perhaps the stupidest woman in the world, I licked my lips and went for it, “old friend.”

“He ain’t here, girl. You want, I can call him,” the lady offered, looking at me closely.

“No,” I replied quickly, relieved beyond belief that Luke was somewhere else.

There it was, the gods telling me that this was not meant to be. I was going to go with that. Big time.

“I’ll just…” I stopped and looked around, deciding to get the fuck out of Dodge. “Forget it. Could you please just tell him Ava Barlow was here? I’ll try to catch him later.”

I was rethinking telling this woman my name (too late now) when she smiled huge like she had just thought of some hilarious joke but wasn’t going to let me in on it.

“No problem to give him a bell,” she pushed. “I got his number on speed dial.”

“No!” I cried, suddenly sounding desperate because suddenly I
was
desperate. I shouldn’t have come there. I could get the goods on Sissy’s stupid-ass, cheating jerk of a husband myself. It couldn’t be that hard. I didn’t need Luke; I didn’t need anyone. “Really, thanks, but I’ll just go, I’ve got to be somewhere anyway.”

I started edging away, deciding on escape.

“Just hang on one tick,” the lady said, ever helpful, getting up and waving her hands to dry her nails. “I’ll just talk to the boys in the back. Maybe they know where he is.”

Boys in the back?

A door opened and a man (most definitely
not
a boy) walked in and at one glance at him I stared.

At first I was worried it was going to be Luke, but it wasn’t. This guy was tall, dark-haired with jade-green eyes, a lean, muscled body to die for and he was unbelievably gorgeous. Not your average everyday gorgeous but otherworldly gorgeous. His green eyes were on me and he looked like he too thought something was hilarious.

I thought distractedly, considering everyone looked about ready to laugh, that this must be a fun place to work.

I had a silent freak out and wondered why, now that I needed advice, Good Ava and Bad Ava disappeared. I noticed too late that Hot-Green-Eyed-Guy was standing between the exit and me.

“Mace,” he said and I blinked.

What kind of name was Mace? He certainly looked like he had some non-Caucasian ethnicity to him, maybe Polynesian, and who was I to say what Polynesians named their kids but
Mace?

Why Men Lie by Linden MacIntyre
Dirty Secret: A Bad Boy Romance (Bluefield Bad Boys Book 3) by Tess Oliver
Christmas at Rose Hill Farm by Suzanne Woods Fisher
Birthright by Judith Arnold
Spurred On (The Quick and the Hot) by Petrova, Em
A Season of Love by Amy Clipston
Michael Fassbender by Jim Maloney
My Lucky Days: A Novel by S.D. Hendrickson
Escape From The Planet Of The Apes by Jerry Pournelle
A Baby For The Billionaire by Evelyn Troy
Our partner