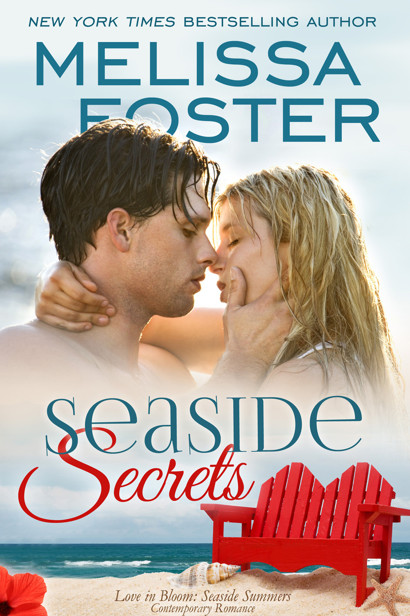 If this is your first Love in Bloom book, then you have many other characters to fall in love with, starting with the Snow Sisters, then moving on to the Bradens, the Remingtons, and the rest of the Seaside Summers gang. The Love in Bloom series follows several families, and characters from each subseries appear in future Love in Bloom novels.

When I began writing Amy and Tony’s story, I had no idea how much pain they had both experienced. Their pasts came alive for me during the writing process, and the depth of their love blew me away. I hope you experience the same emotional impact.

For Amy Manemann, who is too cute for her own good

“Contemporary romance at its hottest. Each Braden sibling left me craving the next. Sensual, sexy, and satisfying, the Braden series is a captivating blend of the dance between lust, love, and life.”
—Bestselling author Keri Nola, LMHC

“[LOVERS AT HEART] Foster’s tale of stubborn yet persistent love takes us on a heartbreaking and soul-searing journey.”
—Reader’s Favorite

“Smart, uplifting, and beautifully layered.
I couldn’t put it down!”

“Steamy love scenes, emotionally charged drama, and a family-driven story make this the perfect story for any romance reader.”

“HAVE NO SHAME is a powerful testimony to love and the progressive, logical evolution of social consciousness, with an outcome that readers will find engrossing, unexpected, and ultimately eye-opening.”

“TRACES OF KARA is psychological suspense at its best, weaving a tight-knit plot, unrelenting action, and tense moments that don’t let up and ending in a fiery, unpredictable revelation.”

“[MEGAN’S WAY] A wonderful, warm, and thought-provoking story...a deep and moving book that speaks to men as well as women, and I urge you all to put it on your reading list.”

“COME BACK TO ME is a hauntingly beautiful love story set against the backdrop of betrayal in a broken world.”

“I JUST CAN’T believe that Jamie’s the first one to get married. I mean, Jamie? He never even wanted to get married.” Amy Maples was three sheets to the wind, sitting in a bar at the Ryder Resort in Boston. That was okay, she rationalized, because it was the night before the wedding of her good friends Jessica Ayers and Jamie Reed, and she and her friends were celebrating. Besides, now that Jessica and Jamie were getting married and her other three besties had gotten engaged, Amy was the only single woman of the group. Drunk was the only way she was going to make it through the weekend.

“But that was before he met Jessica and she rocked his world.” Jenna leaned across the table in the dimly lit bar and grabbed Amy’s hand.

Amy saw Jenna’s lips curve into a smile as she shifted her eyes to Tony Black, another friend they’d known forever, sitting with his arm around Amy, as per usual. Jenna raised her brows with a smile, implying something Amy knew wasn’t true. She rolled her eyes in response. Tony always sat with his arm around her, and it didn’t mean a damn thing, no matter how much she wished it did.

Amy and her besties, Jenna Ward, Bella Abbascia, and Leanna Bray, had grown up spending summers together at the Seaside community in Wellfleet, Massachusetts, and to this day they continued to spend their summers there, along with Jamie and Tony. The six of them had spent eight weeks together every summer for as long as Amy could remember. Their parents had owned the Seaside cottages, which they’d passed down to them. Summers were Amy’s favorite time of year. Now that Amy’s company, Maples Logistical & Conference Consulting, was so successful, she was able to take eight weeks off while her small staff handled the workload. Amy had spent seven years building and nurturing the business, and over the last three years she had turned it into a six-figure venture with clients varying from accounting to full-on logistical consulting. She could hardly believe how her life, and her summers, had changed. Just four years ago she was working part-time during the summers at one of the local restaurants to keep a modicum of income coming in. She loved summers even more now that she didn’t have to work. Of course, her love of summers might also have something to do with being in love with the six-foot-two professional surfer and motivational speaker currently sitting beside her.

If only it were reciprocated
. She tipped back her glass and took another swig of her get-over-Tony drink.

“Petey, can you please get me another drink?” Jenna batted her lashes at her fiancé, Pete Lacroux. She and Pete had gotten engaged last year. Pete was a boat craftsman and he also handled the pool maintenance at Seaside. Pete nuzzled against her neck, and Amy slid her eyes away. Maybe if Sky, Pete’s sister, were there, she’d feel a little better. Sky wasn’t currently dating anyone either, but Sky had to work, so Amy was on her own.

Bella and her fiancé, Caden Grant, were whispering nose to nose, Leanna was sitting on Kurt’s lap with her forehead touching his, and Jamie and Jessica were looking at each other like they couldn’t wait to tear each other’s clothes off. Amy stole a glance at Tony, and her heart did a little dance. Delicious and painful memories from the summer before college tried to edge into her mind. As she’d done for the past fourteen years, she pushed them down deep as Tony leaned in close.

God, she loved how he smelled, like citrus and spice with an undertone of masculinity and sophistication. She knew he wore Dolce & Gabbana’s The One. She kept a bottle of The One beside her bed at home in Boston, and every once in a while, in the dead of winter or on the cusp of spring, when months stretched like eons before she’d see Tony again, she’d spray the cologne on her pillow so she could smell him as she drifted off to sleep. It never smelled quite as good as Tony himself. Then again, Tony could be covered in sweat after a five-mile run, or laden with sea salt after a day of surfing, and he’d still smell like heaven on legs. Since they were just friends, and it looked like there was no chance of them becoming more, she relied on her fantasies to keep her warm. When she was alone in bed at night, she held on to the image of Tony wearing only his board shorts, his broad shoulders and muscular chest glistening wet, muscles primed from the surf, and those delicious abs blazing a path to his—

Tony pressed his hand to her shoulder and pulled her against him, bringing her mind back to the present.

“Time for ice water?” he asked just above a whisper.

So much for her fantasy. She was always the
good girl
who did the right thing, the only exception being the occasional extra drink or two when she was with her Seaside friends. At least that’s what she led everyone to believe. Only she and Tony knew that wasn’t the only exception—and she made sure that was a taboo subject between them. He wouldn’t dare bring it up. She might not survive if he did. She sobered a little with the memory and shifted it back into the it-never-happened place she buried deep inside her. Her secret was lonely in that hollow place, being the only one kept under lock and key.

She met Tony’s denim-blue eyes and felt a familiar rush of anticipation in her belly. Maybe tonight she wouldn’t be the good girl.

“Um, actually, I think I want another drink.”

Tony arched a brow in that sexy way that made his eyes look even more intense. He pressed his cheek to hers and whispered, “Ames, you can’t show up for the wedding tomorrow with a hangover.”

No, she certainly couldn’t. But she’d like him to stay right where he was for a while longer, thank you very much. Since she had a life-changing job offer in hand—a dream job worthy of closing down the business she’d spent seven years building and keeping only a handful of clients—she and her girlfriends had decided it was time for Amy to take a chance and lay her feelings on the line with Tony. She picked up her glass and ran her finger around the rim, hoping she looked sexy doing it. Then she sucked that finger into her mouth, feeling a little silly.

I suck at this whole seduction thing
.

“I’m a big girl, Tony. I think I know what I can handle.”
And I don’t want to handle my liquor tonight. I have plans. Big plans
.

Tony rose to his feet with a perturbed look on his face and rubbed his stubbly jaw. “You sure?”

“Mm-hmm.” Even as she said it, she considered saying,
Water’s good. Just get me water
. She watched him walk up to the bar. At heart, Amy was a good girl. Her courage faltered and she tried to hang on to a shred of it. She needed to know if there was even the slightest chance that she and Tony might end up together. The problem was, she wasn’t a seductress. She didn’t even know where to begin. That was Jenna’s forte, with her hourglass figure and sassy personality. Even Bella, who was as brash as she was loving, had pulled off being seductive with Caden. The sexy-kitten pictures on Amy’s pajamas were more seductive than she was.