Read She's Asking for It! Online

She's Asking for It! 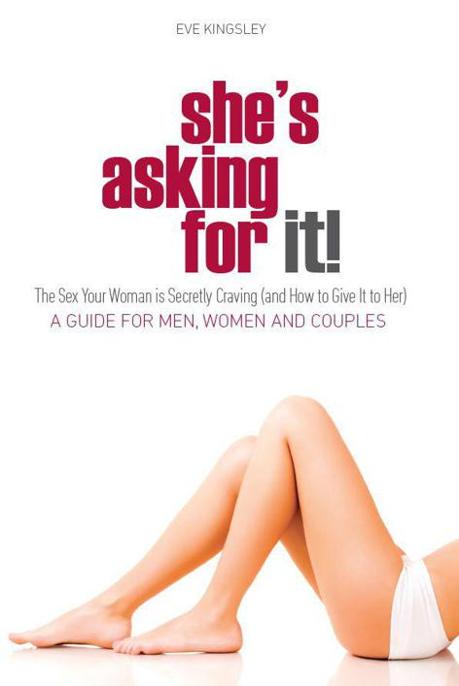 She's Asking for It!
The Sex Your Woman is Secretly Craving
(and How to Give it to Her)
A Guide for Men, Women, and Couples

The cliché that the heat of relationships tends to fade with time may seem obvious to even the newest sexual explorer, but the reason behind this sexual decline may surprise you. The kind of passion that keeps love alive is a deep desire that most women are too shy to admit, men are too scared to try and some couples are too uncomfortable to talk about, even inside the safe space of their bedroom. It’s not anything kinky or crazy, nothing shocking or strange, but it is something that recent polls have shown can drive a woman absolutely wild!

What is this sensual secret, you ask? Prepare yourself to take a few small steps, followed by a few giant leaps, into the wonderful world of the alpha male. Recent studies have shown that most women long to be sexually dominated by strong and assertive men who aren’t afraid to take charge of their nocturnal activities.

This is understandable.
Over the last few decades, there has been a complicated combination of the feminist revolution and the birth of political correctness that has really muddled the issues. Even the most intimate relationships are marred by this desire to remain inside the lines. On top of all the difficulties that couples have just talking about this topic, there are still so many women out there who have been raped, sexually abused or assaulted by men, and more often than not, by men they know and with whom they have had intimate relationships. This makes any kind of foray into the realm of rough play even more dangerous for both partners.

It is entirely within the realm of reason that a woman who feels any sort of kinship with feminism and who owns her own position of female power in an egalitarian relationship would be reluctant to ask her man to be more, well, “manly” in the bedroom. And any man who respects his woman is going to feel a bit uncomfortable with taking the chance to treat his partner in life like she’s a toy to be played with, even if she’s the sexiest toy you’ve ever seen. Even if she’s given him hints. Even if she’s been waving flags of invitation for weeks or months. It’s not easy being alpha!

It can be incredibly scary to entertain the thought of volunteering to be roughed up even a little bit during sex, and it certainly isn’t an easy task to be the one roughing, with a million questions racing through your mind:

And what about her? Even if this is her idea, there are going to be a lot of questions for her:

Think of the “Alpha Male” fantasy this way - on the scale of kink, having your guy be a little bit rough and a lot manly with you doesn’t even tip the balance. To put your fantasy into perspective, consider this:

If the message hasn’t come across loud and clear yet, maybe you need to hear it one more time: couples that like a little rough sex every once in a while are
not
pushing the envelope on the kink factor. It is a perfectly normal impulse for women to crave something more from their everyday encounters and men who want to make this fantasy come true are not only helping to create a great deal more intimacy in their loving relationships, but learning to harness their own personal power and capture their own sense of confidence!

By the time you finish reading this book, you will both have learned to not only feel more comfortable talking about your bedroom desires together, but you will have everything you need to start acting out some of the male-dominant scenarios you’ve been dreaming of during your next trip to the bedroom.

This book has been split up into three separate parts. The first section of the text is written especially for the men. Any guy worth his salt is going to be apprehensive about roughing up his partner during loving, consensual sex. You probably have a lot of questions that need answering when it comes to being successful at indulging your ladylove, so read on, Manly Man. When you are through with the chapters in Part One, you will be completely prepared to sit down with your lover and make a plan to take your lovemaking to the next level – starting tonight!

Ladies, the second part of this book is dedicated to you. There are parts you will want to share with your partner (and he may want to share some bits from Part One with you!) but there is also a chapter for your eyes only. Together we will figure out exactly what it is that you really want your man to do in the bedroom, how to talk to him about it, and then how to show him. We will discuss the boundaries you should set up, and we will also talk about what this does and doesn’t mean for you outside the bedroom. This could mean a big change in your relationship and you want to make sure that those changes are meaningful, exciting and always for the best!

The final section of this book is for both of you. Read it and then talk about it. It provides tips and suggestions for couples to get into the spirit of a woman’s deepest desires. From dirty talk, oral sex, rough intercourse and intimate communication, all the way to taking it up a notch with toys and games, you’ll figure out exactly what you need to get things started and keep them going in the right direction.

PART ONE: FOR MEN

Chapter One – The Alpha Male

Women sure are a mystery, aren’t they? This must be a confusing time for you, finding out that what your woman wants most is for you to be more of the strong, silent type and take the chance to rough her up a bit. It goes against pretty much everything you know about how to woo a woman, doesn’t it?

First of all, it goes against everything you were taught as a young man going out into the world. Even if your dad was a lumberjack when you were a kid, just think for a moment about all the advice you’ve been given in your life, starting from when you were just a little tyke and continuing all the way into your adolescence and adulthood:

The list goes on and on. When you grew up – and so did the women around you – there were terrifying concepts like date rape and sexual harassment, things that can strike fear into the hearts of anyone, man or women, scared to make the wrong move or be taken advantage of in some way. I’m sure at your college or at your job you’ve attended a mandatory training session about what is and is not acceptable with women in more formal settings:

And all of that is only scratching the surface of the fight women have had to wage for equality in our society, of which I’m sure you’re well aware. Unlike the generations that have come before you, you have probably had a female boss or two, or at least know women who make more money than you or are in higher positions in your field of work, women who demand respect and can take care of themselves. So, it’s been drummed into your head that: