Read The day of the locust Online

The day of the locust 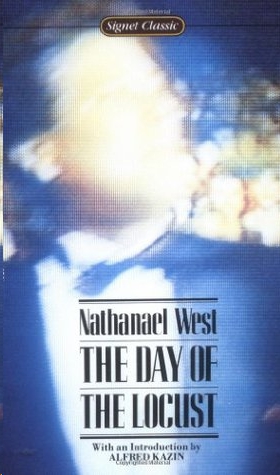 Project Gutenberg of Australia eBooks are created from printed editions which are in the public domain in Australia, unless a copyright notice is included. We do NOT keep any eBooks in compliance with a particular paper edition.

Copyright laws are changing all over the world. Be sure to check the copyright laws for your country before downloading or redistributing this file.

This eBook is made available at no cost and with almost no restrictions whatsoever. You may copy it, give it away or re-use it under the terms of the Project Gutenberg of Australia License which may be viewed online at http://gutenberg.net.au/licence.html

To contact Project Gutenberg of Australia go to http://gutenberg.net.au

Title: The Day of the Locust (1939) Author: Nathanael West

Around quitting time, Tod Hackett heard a great din on the road outside his office. The groan of leather mingled with the jangle of iron and over all beat the tattoo of a thousand hooves. He hurried to the window.

An army of cavalry and foot was passing. It moved like a. mob; its lines broken, as though fleeing from some terrible defeat. The dolmans of the hussars, the heavy shakos of the guards, Hanoverian light horse, with their fiat leather caps and flowing red plumes, were all jumbled together in bobbing disorder. Behind the cavalry came the infantry, a wild sea of waving sabretaches, sloped muskets, crossed shoulder belts and swinging cartridge boxes.. Tod recognized the scarlet infantry of England with their white shoulder pads, the black infantry of the Duke of Brunswick, the French grenadiers with their enormous white gaiters, the Scotch with bare knees under plaid skirts.

While he watched, a little fat man, wearing a cork sun-helmet, polo shirt and knickers, darted around the corner of the building in pursuit of the army.

"Stage Nine--you bastards--Stage Nine!" he screamed through a small megaphone.

The cavalry put spur to their horses and the infantry broke into a dogtrot. The little man in the cork hat ran after them, shaking his fist and cursing.

Tod watched until they had disappeared behind half a Mississippi steamboat, then put away his pencils and drawing board, and left the office. On the sidewalk outside the studio he stood for a moment trying to decide whether to walk home or take a streetcar. He had been in Hollywood less than three months and still found it a very exciting place, but he was lazy and didn't like to walk. He decided to take the streetcar as far as Vine Street and walk the rest of the way.

A talent scout for National Films had brought Tod to the Coast after seeing some of his drawings in an exhibit of undergraduate work at the Yale School of Fine Arts. He had been hired by telegram. If the scout had met Tod, he probably wouldn't have sent him to Hollywood to learn set and costume designing. His large, sprawling body, his slow blue eyes and sloppy grin made him seem completely without talent, almost doltish in fact.

Yes, despite his appearance, he was really a very complicated young man with a whole set of personalities, one inside the other like a nest of Chinese boxes. And "The Burning of Los Angeles," a picture he was soon to paint, definitely proved he had talent.

He left the car at Vine Street. As he walked along, he examined the evening crowd. A great many of the people wore sports clothes which were not really sports clothes. Their sweaters, knickers, slacks, blue flannel jackets with brass buttons were fancy dress. The fat lady in the yachting cap was going shopping, not boating; the man in the Norfolk jacket and Tyrolean hat was returning, not from a mountain, but an insurance office; and the girl in slacks and sneaks with a bandanna around her head had just left a switchboard, not a tennis court.

Scattered among these masquerades were people of a different type. Their clothing was somber and badly cut, bought from mail-order houses. While the others moved rapidly, darting into stores and cocktail bars, they loitered on the corners or stood with their backs to the shop windows and stared at everyone who passed. When their stare was returned, their eyes filled with hatred. At this time Tod knew very little about them except that they had come to California to die.

He was determined to learn much more. They were the people he felt he must paint. He would never again do a fat red barn, old stone wall or sturdy Nantucket fisherman. From the moment he had seen them, he had known that, despite his race, training and heritage, neither Winslow Homer nor Thomas Ryder could be his masters and he turned to Goya and Daumier.

He had learned this just in time. During his last year in art school, he had begun to think that he might give up painting completely. The pleasures he received from the problems of composition and color had decreased as his facility had increased and he had realized that he was going the way of all his classmates, toward illustration or mere handsomeness. When the Hollywood job had come along, he had grabbed it despite the arguments of his Mends who were certain that he was selling out and would never paint again.

He reached the end of Vine Street and began the climb into Pinyon Canyon. Night had started to fall.

The edges of the trees burned with a pale violet light and their centers gradually turned from deep purple to black. The same violet piping, like a Neon tube, outlined the tops of the ugly, hump-backed hills and they were almost beautiful.

But not even the soft wash of dusk could help the houses. Only dynamite would be of any use against the Mexican ranch houses, Samoan huts, Mediterranean villas, Egyptian and Japanese temples, Swiss chalets, Tudor cottages, and every possible combination of these styles that lined the slopes of the canyon.

When he noticed that they were all of plaster, lath and paper, he was charitable and blamed their shape on the materials used. Steel, stone and brick curb a builder's fancy a little, forcing him to distribute his stresses and weights and to keep his corners plumb, but plaster and paper know no law, not even that of gravity.

On the corner of La Huerta Road was a miniature Rhine castle with tarpaper turrets pierced for archers. Next to it was a little highly colored shack with domes and minarets out of the Arabian Nights. Again he was charitable. Both houses were comic, but he didn't laugh. Their desire to startle was so eager and guileless.

It is hard to laugh at the need for beauty and romance, no matter how tasteless, even horrible, the results of that need are. But it is easy to sigh. Few things are sadder than the truly monstrous.

The house he lived in was a nondescript affair called the San Bernardino Arms. It was an oblong three stories high, the back and sides of which were of plain, unpainted stucco, broken by even rows of unadorned windows. The fa�ade was the color of diluted mustard and its windows, all double, were framed by pink Moorish columns which supported turnip-shaped lintels.

His room was on the third floor, but he paused for a moment on the landing of the second. It was on that floor that Faye Greener lived, in 208. When someone laughed in one of the apartments he started guiltily and continued upstairs.

As he opened his door a card fluttered to the floor. "Honest Abe Kusich," it said in large type, then underneath in smaller italics were several endorsements, printed to look like press notices.

"...the Lloyds of Hollywood"--Stanley Rose.

On the other side was a penciled message:

"Kingpin fourth, Solitair sixth. You can make some real dough on those nags."

After opening the window, he took off his jacket and lay down on the bed. Through the window he could see a square of enameled sky and a spray of eucalyptus. A light breeze stirred its long, narrow leaves, making them show first their green side, then their silver one.

He began to think of "Honest Abe Kusich" in order not to think of Faye Greener. He felt comfortable and wanted to remain that way.

Abe was an important figure in a set of lithographs called "The Dancers" on which Tod was working. He was one of the dancers. Faye Greener was another and her father, Harry, still another. They changed with each plate, but the group of uneasy people who formed their audience remained the same. They stood staring at the performers in just the way that they stared at the masqueraders on Vine Street. It was their stare that drove Abe and the others to spin crazily and leap into the air with twisted backs like hooked trout.

Despite the sincere indignation that Abe's grotesque depravity aroused in him, he welcomed his company. The little man excited him and in that way made him feel certain of his need to paint.

He had first met Abe when he was living on Ivar Street, in a hotel called the Chateau Mirabella. Another name for Ivar Street was "Lysol Alley," and the Chateau was mainly inhabited by hustlers, their managers, trainers and advance agents.

In the morning its halls reeked of antiseptic. Tod didn't like this odor. Moreover, the rent was high because it included police protection, a service for which he had no need. He wanted to move, but inertia and the fact that he didn't know where to go kept him in the Chateau until he met Abe. The meeting was accidental.

He was on the way to his room late one night when he saw what he supposed was a pile of soiled laundry lying in front of the door across the hall from his own. Just as he was passing it, the bundle moved and made a peculiar noise. He struck a match, thinking it might be a dog wrapped in a blanket. When the light flared up, he saw it was a tiny man.

The match went out and he hastily lit another. It was a male dwarf rolled up in a woman's flannel bathrobe. The round thing at the end was his slightly hydrocephalic head. A slow, choked snore bubbled from it.

The hall was cold and draughty. Tod decided to wake the man and stirred him with his toe. He groaned and opened his eyes.

"You oughtn't to sleep there."

"I want my clothes!" he bellowed.

The bottom of the door next to which he was lying filled with light. Tod decided to take a chance and knock. A few seconds later a woman opened it part way. "What the hell do you want?" she demanded. "There's a friend of yours out here who..." Neither of them let him finish.

Broken April by Ismail Kadare
No Limits by Alison Kent
Irresistible You by Connelly, Victoria
Mahabharata: Volume 8 by Debroy, Bibek
Sky's Lark by Cheyenne Meadows
A Soul for Trouble by Crista McHugh
Friends Forever by Madison Connors
The Innocent Man by John Grisham
Satellite: The Satellite Trilogy, Part I by Davidson, Lee
Divisions (Dev and Lee) by Gold, Kyell
Our partner