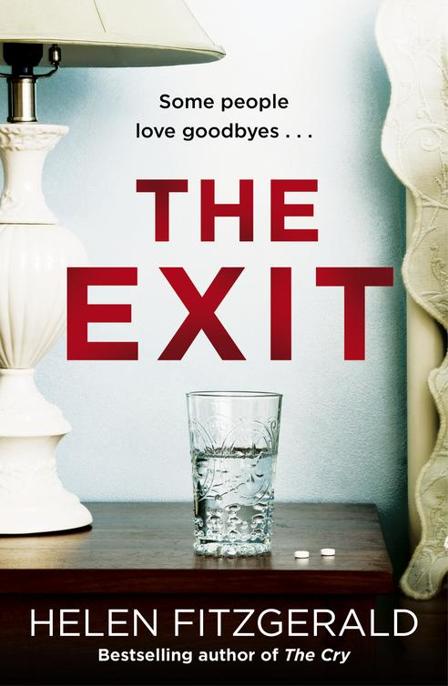 Four Weeks Prior to Death
Chapter One

I didn’t get the job because I didn’t look happy enough. The manager, a twenty-seven-year-old with a lingering acne problem, didn’t admit that exactly. He said I lacked drive. When he asked me where I saw myself in five years, I couldn’t say McDonald’s. ‘I’d love to live in Costa Rica for a while,’ was my answer.

Mum called a meeting when I told her. It was to be held at 5.30 p.m., in the dining room. It would require an agenda. It would begin like the last one.

Mum (in that deep, serious voice of hers): ‘Items for discussion: 1. Catherine’s credit card bill. 2. Catherine’s realistic plans for future career. 3. Catherine’s sleeping pattern and housekeeping habits. 4. Catherine’s future accommodation . . . Is there anything you’d like to add before we begin?’ – No pause before – ‘Okay, 1. . . .’

Mum had been pushing me to try for the only job that required fewer skills than crew member at McDonald’s: care assistant at a place called Dear Green Care Home. She knew someone who knew someone, she said, and gave me a number to call. All I had to be was human, ready to start immediately, and in Clydebank for an interview at 3.30.

The taxi (5. Catherine’s spending) dropped me off at the high iron gates of a spooky stone mansion. I almost expected an elderly butler to answer the nine-foot-high door. Instead: Marcus Baird, thirty years old at most, and owner of this establishment. He sat me down in the office at the front and talked mostly about himself. There were two mirrors in the room: a modern oval one opposite the desk he was sitting at, and a huge ornate number, frame painted orange, leaning against the wall to his right. He could not stop checking himself out in both. Was his fringe maintaining its erection? Tussle, tweak, aye, just so. Was he right to undo one button? Two? One, definitely. How’d he look with his legs crossed? Good, great even. He’d crawled straight out of a B-grade horror movie, this guy – the almost-gorgeous boyfriend who cheats on the blonde star and dies second (after the best friend he cheated with). The estate had been in the family for generations, he told me. His mother had transformed it into a caring and comfortable place for the old and the dying.

‘It’s beautiful.’ I had my third-glass-of-vodka smile on. If we were at a bar, he’d be giving me his number and I’d be saying, ‘It’s not your number I need right now.’

‘Have you had any experience with the elderly?’

He hired me because I’m cute. I don’t have a problem admitting I’m cute. I hate people who say ‘Oh, I’m ugly’, or ‘I’m so fat’, when they’re clearly not. I’m slim and athletic. I have blonde hair, blue eyes, and I’m cute as a button, dammit. Ask the seven boyfriends I was with for less than six weeks; they’ll agree. Don’t ask the three I stayed with longer (never more than three months); they’ll tell you I’m a vacuous narcissist.

Marcus handed me several pieces of paper to fill in before starting work the following day, and showed me my Disclosure Scotland certificate, which Mum had made me apply for two weeks earlier. Lucky I never got caught shoplifting during that pre-Christmas spree in East Kilbride, age twelve. He offered to show me around, but I said I was in a hurry. I didn’t want to see old people unless someone was paying me for it. I didn’t like them. They jumped the line to get on buses, they drove slowly, walked slowly, packed groceries slowly, paid for groceries slowly, infected us with their miserable faces, had trouble paying gas bills, told boring stories, smelt of wee, took up space. I was ageist, so shoot my firm optimistic face. I wasn’t one of those young people who help old ladies cross roads. My mate Paul was. He even spent most of his spare time playing cards with his grandfather and taping him talking about the war (not sure which one). Not me, I avoided them as if being old was infectious. I don’t think the elderly should mix with the young. They should be hidden. I guess that’s what some of them were doing in Dear Green Care Home, only I was going to find them and would continue to do so for £6.19 an hour.

I was ten minutes late to the family meeting (6. Catherine’s timekeeping) and was right to assume Mum would be furious. She sat at the end of the dining-room table with that I’m-very-disappointed look on her face. I took a seat at the other end and told her I got the job at the place she suggested and would therefore be able to pay off my credit card and maybe even gain the experience necessary to get into a postgrad in social work.

I wanted to do a postgrad in social work as much as I wanted to live in this godforsaken country for the rest of my life. But it was more pleasing to her than my last idea – to organise glam parties for extortionate fees – hence, the BA in Events Management at a college too embarrassing to name here. I can still see the mortification on her face when I told her I’d applied for the same course at three different underclass colleges. She almost fainted. Why hadn’t I applied for anything else: Psychology, English, Law, Art, Environmental Studies, something – for God’s sake, anything – that had meaning? ‘You want to spend your career organising ice sculptures for obnoxious sweet-sixteens?’

‘Ice sculptures are so nineties,’ I eye-rolled.

She was trying to suppress the excitement now. ‘Social work! What an excellent idea.’ I could read her thoughts:
My Catherine might have integrity and depth after all!
Maybe I’d even climb the ranks to uber-do-goodery, as she had in Oxfam.

‘Got a job working with wrinklies,’ I posted on Facebook.

Mum didn’t like my friends. I think I chose them, and kept them, because of that. At school, I gravitated to the cool girls who wore too much make-up and sat at the cool-girl table in the lunch hall. They (we) started smoking and drinking at twelve, lost our collective virginities by fifteen (at the latest) and wore clothes only from Top Shop and only if they were pre-approved by Gina.

At college, I didn’t have to gravitate to this type of friend. That’s all there were.

Mum’s friends were successful, serious, important and interesting (yawn). Her nights out and dinner parties involved loud discussions and knowing sniggers. They were rarely drunken, and there were never any stories to tell after.

Both of us had one exception. Mum’s was Antonio, who grew up in the same street as her. They bitched about their children (yes, I heard, Mum: ‘She’s just so hedonistic! I’m worried she’ll never be serious about anything’). Antonio would console her (‘You think that’s bad, John refused to go back to his mother’s last weekend. Locked himself in the bathroom for three hours.’) He’d left his wife because he finally realised he was gay, but never seemed to be able to get a boyfriend. I think Mum saved all her laughter for Antonio.

My exception was Paul, who I’d met in one of the mind-opening activities Mum forced on me as a kid. Drama, at the Citizens Theatre, that time. When we were younger, Paul was the geek I could tell anything but had to hide from my shallow friends. At college he was the cool medical student I talked about too much to my friends, but never introduced to them. His dad owned an abattoir, which I found fascinating and Paul found embarrassing and disgusting. He was eight when he first saw the dead pigs hanging from hooks in his dad’s huge shed. He ran out screaming, cried for hours, and never ate meat again, which troubled his father no end. He was a serious boy, and my mother admired him so much that I wished I didn’t like him as much as I did. Like Mum, he didn’t approve of my friends, and taunted me about them constantly: ‘You want to be a clueless mean girl, but it doesn’t suit you.’ Sometimes, he’d trick me into meaningful conversations (about the death penalty, for example) and say, ‘Ha! See, you do care!’ When my Higher Exam results (five As, but that doesn’t mean Shakespeare and calculus are interesting, and that
E News!
and
Now!
aren’t), he photocopied the certificate and framed it with a plaque at the bottom: ‘Proof that Ms C. Mann is not the dickhead she claims to be.’ He looked down on my college course and my friends. For some reason, he refused to look down on me.

I swithered about who to hang with to celebrate. Paul’s for a drink? Nah, his exams were looming so he was out of commission for weeks. If he was taking a rare moment away from his studies, he’d probably make me play cards with him and his grandad, recently installed in a custom-built extension. Paul would be all chuffed, as if the job meant something, as if it was the first (inevitable) step towards maturity and mattering. Last thing I needed was a card-playing oldie and the patronising congratulations of his driven grandson. Tonight it would be Gina and Co.

They were as grossed out as I was by my new role. ‘You’ll have to wipe arses!’ We were drunk by ten, dancing in a club by twelve, snogging strangers by one, home by four.

I arrived at work the next morning with a hangover and a lie. ‘I’m sorry, the first two buses drove straight past!’

Marcus Baird hated damn buses but loved the hell out of me: ‘You poor thing. The train’s more reliable. Come on in!’ He took me to the office and set about inducting me: bank details on file (his small leather jacket zipped, unzipped), application for first-aid training organised (fringe checked in oval mirror), size ten uniform of ugly black trousers, uglier apricot shirt, size six pumps and name badge handed over (double checked in large ornate mirror), my arm touched unnecessarily with a half-smile and an eye-twinkle. He’d probably try and do me on one of the two desks in this office within the week. While I was trying to figure out if I found him attractive or not, he went over the job description: To assist with personal care and daily living tasks; to maintain and promote dignity. ‘This is a happy place, believe it or not, and that has so much to do with staff attitude. Any questions?’

I wanted to ask about lunch – Was there a Greggs nearby? I could murder a steak-bake and a fudge doughnut – then decided if I was going to ask anything it should be something that made me sound caring, so I said I didn’t have any questions yet.

‘Today I’d just like you to settle in. Take your time. The best thing might be to get to know Rose. Did you know there are many different types of dementia?’

‘Rose’s is a cruel one – she gets stuck in a trauma that happened years ago, flits in and out of it. We need to take turns keeping an eye on her. Come, she’s having breakfast. I’ll introduce you.’