Read The House of Roses Online 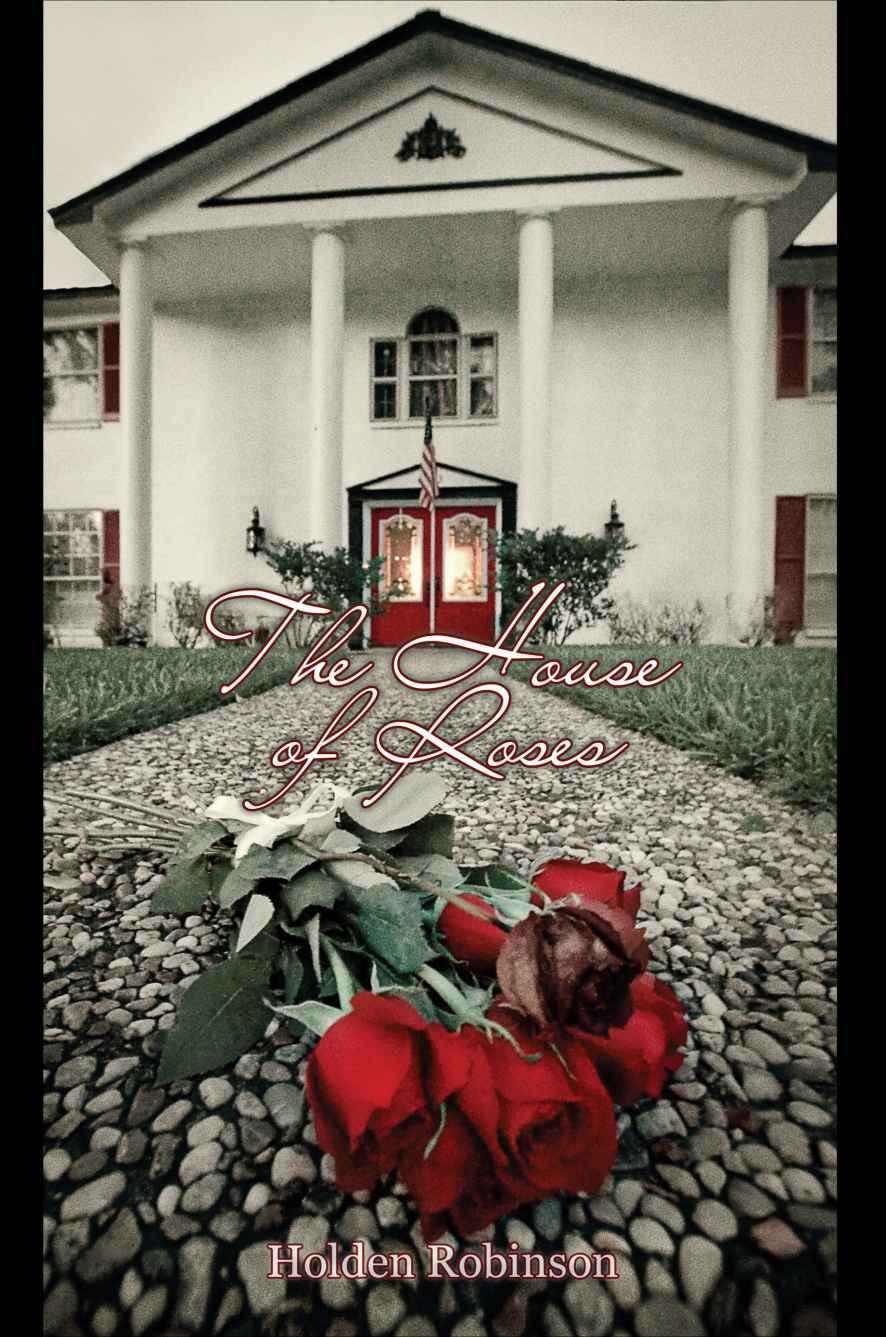 In The House of Roses, debut author, Holden Robinson, takes the reader on a journey to reclaim lost love. Love has been devalued. Pursuits of lesser importance have trumped love, and personal relationships.

Novelist, Caitlin Goodrich, and AIDS Pediatrician, Colin Thomas, have ended their four-year love affair. As their days apart stretch into months, their regret grows proportionately to the size of Caitlin's abdomen. Colin has left more than a broken heart.

In the early hours of single-motherhood, Caitlin learns she has been betrayed by the one woman who vowed to care for her. In New Hope, Pennsylvania, where the secrets began, and the lies are encased in the walls of the historic landmarks, the true will be revealed.

Dr. Colin Thomas has led a life of orderly chaos. This well-made plan begins to unravel when he is asked a question that will change his life. He begins to see living and dying in a way he never has.

The House of Roses is an incredible story of love, loss, betrayal and secrets, but more importantly, it speaks of the weight of guilt, the strength of family, and the incredible power of love.

All rights reserved. No part of this book may be reproduced, stored in a retrieval system or transmitted in any form or by any means without the prior written permission of the publishers, except by a reviewer who may quote brief passages in a review to be printed in a newspaper, magazine or journal.

The final approval for this literary material is granted by the author.

The House of Roses
is printed in 12-point Constantia

As stated, the characters and events in this book are fictional. Any similarity to individuals or events, past or present, is coincidence. However;  hospice care is very real. I would be remiss if I didn't say thank you to all the hospice care professionals who come into our lives during our darkest hours. A special thank you to all who cared for my daddy, Frederick Holden, as he faced the final days of his brave fight with cancer. I do not remember your names or faces, and for this, I apologize. I will always remember what you meant to our family. This could never be forgotten.

I cannot begin to thank everyone who helped and supported me along this journey. Thank you to Mom, my rose, who has done more for me than she will ever know, including helping to title this book. Without your love and limitless support, none of this would have been possible. To my daughter, Heather Ann Robinson, who holds me to a special standard she knows I can achieve. You make me want to be a better person. I don't know what I would have become, if not for you.

To my girls, Cindy Ruffo, Anna Holt, and Kristie Holden, thank you for the fun, for reading my words, and for your patience when I talked of nothing but this book and the many others to come. To my brother, William Holden, who is a talent waiting to be discovered, and a kind and gentle man. To Tyler Ruffo, who was delighted by the car AC gave him for his sixteenth birthday, even though it said Matchbox on it. To my sister, Joanne Stevenson, whose arrival in my life a few years ago reminded me that the greatest gifts are the miracles we don't expect, and that family is a word that is constantly redefined. To those  whose names I have not mentioned, thank you for tolerating my drama. I know it is not always easy.

A special thank you to Deb Morrissey, my soul sister, whose support gets me through the dark times, and whose calls remind me that it's okay to be crazy. To John Goleeke, who thought I was beautiful, despite my flaws. You made me believe anything was possible, and I miss you. To Jill Kraft, who made me feel like a superstar when I couldn't afford milk. Thank you!  I really needed to feel that way.

To Anita Melograna, and Fran Molinaro of Crosswinds Agency. You never tired of my endless emails, my persistent whining, and my fading tolerance. It has been an honor to share this journey with you. Thank you from the bottom of my heart. To Bill Thompson,  one of the first to recognize my ability, who reminded me that it is honorable to have passion. Without you, Bill, I am not sure I would have pressed on when things got tough.

In loving memory of my father, Frederick Holden, whose death, while painfully tragic, taught me how to live.

And, of Kat Kraengel, my very best friend, who knew I was unique in every sense of the word, and loved me anyway.

Thanks, Kat. You reunited the girls of the CV class of 1983.

You are both missed, and will remain forever in my heart.

It was such an unusual feeling, as if hundreds of butterflies had taken flight and fluttered about in a majestic dance. It could have been indigestion. Less than an hour earlier, she had quieted her massive appetite with fat-filled pastries. The bakery delivered, providing comfort food to the immobile, and as she brushed away crumbs from the massive protrusion beneath her breasts, she felt shame and disgust at her gluttony. It had to be the donuts. Just to be sure, she watched the clock to see if the discomfort would pass. Five minutes passed – five minutes that felt like a lifetime – and suddenly forty-four year old Caitlin Goodrich knew it wasn't butterflies, or the dietary misdemeanor. It was full blown labor. She reluctantly called her mother, and Rita Hollings answered on the first ring.

“
Is it time?” her mother asked, without saying hello.

“
Mom, wait....,” Caitlin said, hearing the phone disconnect. “Here we go,” she whispered to the empty room. “Oh, Georgie, what am I doing?” she whined to her ancient Persian cat who sat eying her from the back of the sofa. Georgie blinked twice and laid his head on his paws. In typical feline fashion, he offered no response, and remained oblivious to the mass chaos about to invade his peaceful existence.

Two babies, not one, would soon descend upon the domicile, replete with all the paraphernalia necessary to insure the infants' comfort. When the pain subsided, Caitlin recalled gently touching each item before placing it in the tastefully decorated nursery she had finished hours before. Obviously, just in time, she thought.

Her reverie was interrupted by her abdomen, which seemed to be taking on a life of its own. Her stomach muscles contracted again, announcing she should get to the hospital without delay.

“
Oh, babies, not now,” Caitlin whispered, as she stood motionless in the living room of her Brooklyn apartment. “CSI Miami reruns are on tonight, and there are dirty dishes in the sink. Could you wait until Monday or Tuesday?”

She plodded carefully through the living room, feeling the plush gray carpet soothe her bare feet. She couldn't imagine leaving the safety of her sanctuary, couldn't imagine putting shoes on the feet that had betrayed her and now looked more like thighs with toes.

“
Ugh,” she said to the empty room, as another contraction threatened to tear her apart. “Mom!” she hollered, although Rita Hollings was still en route.

She grabbed the handset of the phone, tempted to call her mother's cell phone to see how close she was, but thought better of it. Once her mother arrived, she'd be in Caitlin's life nonstop for weeks, and she knew it was in her best interest to enjoy her last few moments of peace.

Caitlin passed the mirror in the hallway, and against her better judgment, glanced at it. She paused, and although inclined, she didn't gasp. Who was this woman staring back at her with fear and doubt in her eyes?  Caitlin was a barely recognizable version of her former self. Nine months before, she had been beautiful, not by her own definition, but by
his
. Her blond hair was the same. The soft curls lay against shoulders tense from pain. Her blue eyes remained prominent in the face swollen by the strain of third-trimester pregnancy. She was tall like her mother, but still she'd felt dwarfed next to
him
.

The pain forced her to look away from the mirror.

“
Ugh,” she groaned again, her one word a mixture of sound and breath. She looked at the phone she still held in her hand. There was one more call she needed to make, but she wasn't ready. She knew she should call
him
, should tell him. He should know. But, how would she even start?  What would she say?
I'm scared. I need you. I was wrong to let you go. I love you. I never stopped.

“
I do love you,” Caitlin whispered, feeling a sharp pain in her chest unrelated to the imminent birth.

She still saw him everywhere, still heard his voice in a crowd. No amount of detergent could erase his smell from the sheets where they'd slept. She remembered that last morning, no matter how hard she tried to force the memory from her mind. The sadness and resignation in his eyes. The tightening in her chest that felt like an impending death.

Their lives had been so different, so difficult to mesh into one. He was always emotionally detached, afraid to share his feelings with her. She tired of competing for his attention. There was always someone else, something else, and he seemed to have so little left over for her. She wanted to be the center of his world, but the world seemed to devour him, this man of medicine, and only when it was done, did it send what little was left of him, back to her. It hadn't seemed like enough.

He gave so much of himself to his patients, fighting to save each one no matter how slim the odds. He was such a good man, a kind man. What had gone wrong?

Caitlin was proud of him, but had she ever told him?  She sensed a deep pain within him, this man who showed such great strength to the outside world, and she'd tried so many times to get him to open up to her. The last time had been on Christmas the previous year. He'd lost a patient the night before, a child, something that should never happen as the young lay dreaming of presents under holiday trees strung with twinkling lights. He'd arrived at her door on Christmas morning, just past dawn, his green eyes, red-rimmed. She'd never seen him so broken, and she had offered her support. She'd  wanted to unburden him of his pain, but no amount of coaxing had enticed him to share his feelings with her. She needed him to open his heart and show her what was inside, but it wasn't within his capabilities. After that, she had simply stopped trying, and the distance between them had evolved into a chasm neither could cross. One month passed. One hellish month filled with tears, ugly words, and finally, resignation. They'd agreed to end it once and for all, promising to remain friends, both knowing it wasn't possible.

The Stopped Heart by Julie Myerson
Seal Team Seven #20: Attack Mode by Keith Douglass
Jewish Mothers Never Die: A Novel by Natalie David-Weill
Fatelessness by Imre Kertesz
Call of the Siren by Rosalie Lario
Geekomancy by Michael R. Underwood
On the Court With... Kobe Bryant by Matt Christopher
Freddie Ramos Springs into Action by Jacqueline Jules
Sideways on a Scooter by Miranda Kennedy
Come Back to Me by Litton, Josie
Our partner