The Hunt for Summer (NSC Industries) 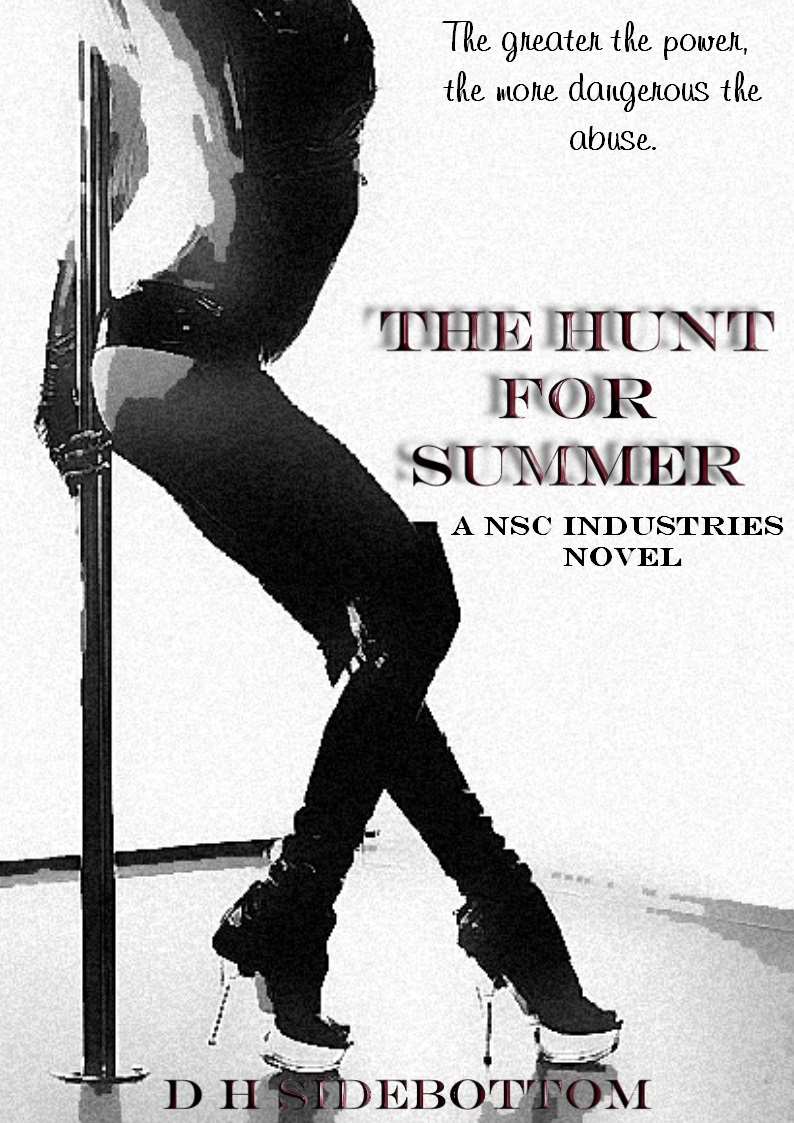 The Hunt
for Summer

The Hunt for Summer

This book is a work
of fiction and any resemblance to actual places, incidents and persons, living
or dead, is purely coincidental.

The most beautiful
things

cannot be seen or even
touched,

they must be felt

I saw him as soon as
he entered the room. My footing stuttered, causing a slight slip of my sole on
the cool metal.

He dominated the
room potently as soon as his heavy foot hit the floor; he always did. His aura
and presence demanded each and every eye in the club, as his own eyes prowled
the girls, flicking from each and every one in his quest for tonight’s
entertainment.

He was well known
with the pro’s as well as enjoyed
by
the pro’s. As soon as he entered
the club they all vied for his attention, hoping they would be the one he chose
that particular night.

The word that went
around was that he knew how to please a girl, could make her scream in absolute
ecstasy, but he was also known for his tendency to dominate and command.  His
need for total control was the reason he came in the club, knowing that some of
these girls specialised in that field.

I swung round into
the dove position so I could take a better look at him. He usually glanced over
at me a few times, but then he would always disappear into a private room with
one of the submissive girls.

His dirty blonde
hair was mused into its usual messy style, the top of it stuck up in all
directions giving him that just fucked look. His chiselled cheekbones
emphasised his piercing blue eyes and his strong jaw held the usual popular
stubbled beard.

His firm body was
the ultimate in heavenly sin. His wide shoulders gave a sense of authority and
his slim hips and tight arse gave a girl palpitations.

You just knew by
looking at him, that naked he would be obscene and delicious, all rolled into a
tight little package.

His clothes were
designer and always tailored to fit him stylishly. Every time he visited The
Black Panther he was adorned in a classy and modern suit, as though he had
arrived straight from the office.

He was the essence
of masculinity, the epitome of virility and the Master of fucking, but nobody
seemed to know much about him, apart from the fact he went by the name of
‘Hunter’.

He leaned his back
to the bar and scanned the room again; his eyes narrow and steely as his friend
leaned in and said something to him. Hunter nodded once in some sort of acknowledgement
but his eyes never left the scene.

I flexed, and finished
my performance with a Rainbow Marchenko as Harry, one of my regular spectators,
stepped up and slipped a twenty down my cleavage. Another younger man tucked
one into the waistband of my small blue fringe skirt.

I winked at Harry as
I smiled my thanks to the other viewer. “Anytime, Willow sweetheart” Harry
winked back, calling me by my professional name.

My real name was
kept secret from the club, my need for privacy was important.

Some professionals
and dancers didn’t mind the clients using their real names but I wanted my
normal life to be kept separate to my professional life. I needed it that way
in fact.

“When you back
darlin’?” Harry asked, interrupting my thoughts.

“Tomorrow, Harry” I
informed him as I pulled on a robe and stepped off the stage.

He leaned in for his
usual cheek kiss and I pecked his leathery skin. “You take care getting home, love”
I urged him and he elbowed me gently.

“Tough as old boots
me, darlin’. No fucker getting their hands on my goods” he smirked and I shook my
head in humour as I watched him hobble across the dim room.

“Willow,” Owen
shouted from the bar and I glanced over at him, “private booking, room 7” he
announced with a grimace and then proceeded to mouth ‘sorry’.

I sighed and nodded before
making the short journey down the corridor to the dressing room, eager to
change quickly before performing again.

“You okay, sugar?”
Misty asked as I flopped in a chair and pulled my boots off. My new six inchers
were swine’s at bedding in and I flexed my toes with a moan.

“Yeah, just tired
tonight” I puffed as I pulled off my fringe skirt and replaced it with a white
thong and pale pink feather mini skirt.

“You got a private?”
she asked with a frown as she pulled on her jeans, her night finished already.

I nodded and
groaned. “Yep” I answered, swapping my bra for a pale pink peasant top and
pulled on some matching sheer thigh highs, tying the top bows before stepping
into a pair of white five inch heels.

“Ooh, new gear” Puss
drooled as she flicked at the bows.

“You like?” I asked,
giving her a twirl and a waggle of my eyebrows. Puss nodded and beamed, her eyes
studying me from top to bottom. I winked as Puss’s jaw dropped when I pulled on
some pink femme fatale armbands.

I chuckled as I took
a gulp from a bottle of water. “Uh, uh” I shook my head slowly and blew her a
kiss before making my way up to room 7.

From what I could
see in the dim room, it contained about six men and three entertainers and I
sighed when I knew it was gonna get explicit.

I really didn’t
understand why men hired a private dancer when there were entertainers in the
room as well. The performers never even got watched on these occasions, as they
were all busy doing other things… mainly fucking.

Flicking on the pole
spot light, I placed the bottle beside the music system and selected some music.

Thinking these men
would appreciate something raunchy and fast instead of slow; I chose
Kevin
Rudolf ft.
Flo Rida ‘You Make the Rain Fall’
and began my sequence.

“You
strip, Willow?” a male voice came from the side of me and I flipped around the
pole to talk to the person.

My hand
slipped on the metal when I saw it was Hunter and I just managed to put my foot
on the ground before landing on my ass.

What
the hell? Why would Hunter request me when he was well known for partying with
the entertainers? Surely fucking overtook the need for a dancer.

He
smiled a dirty big grin and his eyes twinkled “And here I was hoping you was
gonna invite me.”

I gave
him a confused expression and he cocked his head in amusement. “Into your
world” he explained and then mumbled something incoherent that I couldn’t hear.

I just
nodded, still puzzled by his statement.

He looked
amused and bit his lower lip and my eyes involuntary watched that plump lip get
deliciously destroyed under his teeth.

“You
strip?” he asked again.

I gave
him an apologetic smile but nodded “Extra fifty I’m afraid and it’s topless
only.”

He
sucked in a breath and his eyes darkened. “Sure, Red” he smirked as he pulled
out his wallet and handed over the extra cash. I presumed the ‘Red’ endearment was
a referral to my chin length bright red curls. Vampire red, I think the box
said. Don’t ask!

Smiling
timidly, I placed the cash beside the bottle of water and picked
Nine inch
nails ‘Closer’
that was perfect for stripping to.

Another
couple of men entered the room and approached Hunter, who chatted with them as I
set up and when the music started Hunter leaned back on the wall and trained
his eyes on me intensely.

I
found his behaviour rather strange when there were willing women in the room,
and all he wanted to do was watch me strip. But hey, after William’s cut was
removed, I would end up with and extra thirty and boy, did I need the cash at
the moment.

The
beat started and I whipped and spun around the pole and manoeuvred into some
positions before deciding to have some fun with Hunter.

Giving
him my best seductive smile, I flicked the tie on the side of my skirt whilst
tipping upside down into another pose. I nodded to him to reassure him he could
touch when he seemed to hesitate as his fingers reached towards me.

I
watched his throat bob as his long fingers grasped the knot and he pulled,
releasing the tie on the skirt and his eyes followed it to the floor.

Pulling
back up, I grabbed the pole in the crook of my elbows and extended a leg out to
him. His jaw tightened as I cocked my head and dared him to untie the stocking
tops.

He
seemed nervous for some reason, and I wasn’t sure if I found his behaviour
puzzling or charming. His usual dominant demeanour appeared to have disappeared,
just evaporated around us as I continued to offer my leg to him.

His
eyes held mine, an incredible depth of secrets and passion in them, as he
pulled at the ribbons and released the cuff on my thighs. I maintained
position, my leg straight out towards him, as I silently told him to remove the
stocking.

A
couple of men had come to stand and watch and they jeered Hunter, egging him on
in that boyish way only men had.

In The Still of the Night [The Protectors 2] (Siren Publishing Classic) by Monroe, Marla
A Vicky Hill Exclusive! by Hannah Dennison
Tempted by Midnight: A Midnight Breed Novella (1001 Dark Nights) by Lara Adrian
City of Pearl by Karen Traviss
The Devil Amongst the Lawyers by Sharyn McCrumb
The False Prince by Jennifer A. Nielsen
Tallstar's Revenge by Erin Hunter
Stripped Down by Tristan Taormino
HTML The Definitive Guide by Bill Kennedy, Chuck Musciano
Turned to Stone by Jorge Magano
Our partner