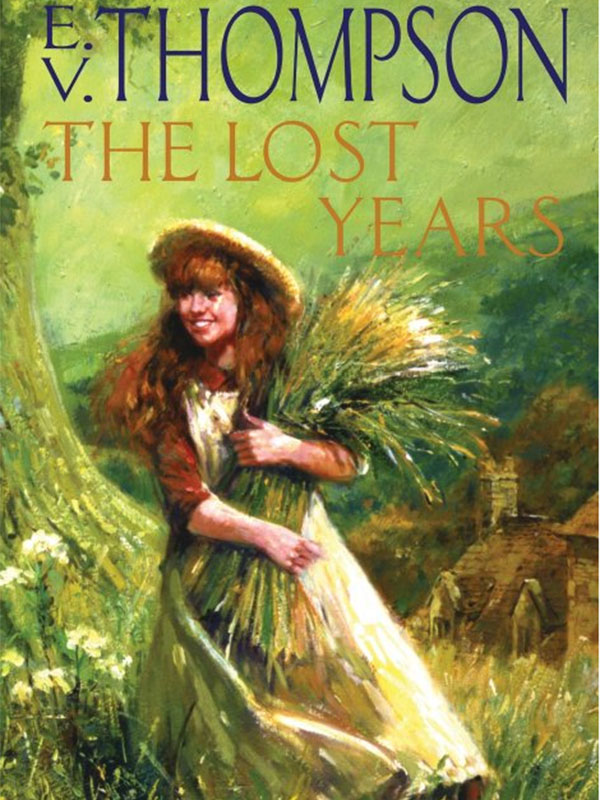 The right of E.V. Thompson to be identified as author of this work has been asserted by him in accordance with the Copyright, Designs and Patents Act 1988

All characters in this publication are fictitious, and any resemblance to real persons, living or dead, is purely coincidental.

The Jagos of Cornwall

The Tremayne family owned Heligan for more than 400 eventful years and it would be impossible to write a credible historical novel around this great Cornish house without making use of their surname.

Nevertheless, although many of the back-ground facts of my story are a matter of history, and the young men of the family served their country with outstanding gallantry in the First World War, all the main characters depicted herein are fictitious and any resemblance to real persons, living or dead, is purely coincidental.

‘There are some men to whom things just seem to happen. I believe Tremayne is one of these.’

The Lieutenant Colonel did not add what was in his mind, that such men either became heroes or were soon killed in action.

In the study of the great house of Heligan, Perys Sampson Tremayne pushed back his chair and rose to his feet. After clutching the edge of the desk for a moment to steady himself, he limped across the room to the window, his slippered feet silent on a carpet that had been rendered threadbare in places by more than two hundred years of wear.

A number of heavy ledgers lay open on the desk. Among them were smaller notebooks, their cardboard covers bound in red, marbled paper. These were the labour books for the Tremayne estate for the years 1914 to 1918.

Entered in the notebooks were the names of men who had been employed in and around the extensive grounds of the Cornish manor house during the four years of the war. Against each name was listed details of their daily tasks and the money they were paid at the end of a working week. In most cases the sum amounted to little more than a pound.

On the first page of the book for 1914 were the names of almost two dozen men. By the last day of war the number had dwindled to eight.

The names had changed, too. Of the remaining eight, only three had been employed at Heligan at the commencement of ‘the war to end all wars’.

The reason for the disappearance of those whose surnames had been familiar around the great house for generations was summed up initially in three words written against their names on various dates.

The words said, simply, ‘Left to enlist’ Their stark finality hid more sorrow than Perys cared to think about.

Although not an immediate member of the family who had occupied Heligan for centuries, Perys was a Tremayne. He had stayed at the house before and during the war. Many of the named men were known to him.

This, and curiosity, was why he had been looking through the labour books, seeking names of those it was hoped might soon return to work at Heligan; to resume a way of life far removed from the horrors experienced on the bloody battle-fields.

There were so pitifully few left alive that Perys had suddenly felt the need to put aside the books. Yet now the view from the window served only to remind him of the world that so many of the Heligan men would never see again. Many who had helped shape the gardens, woods and fields now lay mouldering far from this small corner of Cornwall.

Some of the deaths he took more personally than others. Those of men, mostly older than he, who had shown kindness to him when he first came to Heligan in the year the war began. There were others with whom he had served, and a few who had offered him comfort and solace when it was believed he might never walk again as a result of his wounded leg.

Such thoughts were running through Perys’s mind as he looked out of the window, his gaze travelling over gardens that struggled to maintain the glory they had known in those pre-war days.

In the near distance was the busy little fishing village of Mevagissey. It nestled within a comforting cradle of steep cliffs, at the far end of the valley that sloped down from the house. Here, enterprising fishermen had built houses as closely knit as the fisher-families themselves.

Perys wondered what deep sorrows were hidden within the walls of those houses, and in so many others scattered about the rolling countryside on either side of the village. Even the genuine sympathy of a caring community would not have been able to assuage the anguish of families tragically bereaved by war.

His glance shifted beyond the village, to where the sea sparkled with a silver sheen in the early winter sunshine. It was a gentle sea today, dotted with the boats of working fishermen. No longer was there a need to keep a look-out for the sleek, grey menace of a surfacing submarine, intent upon adding a defenceless fishing boat to the list of its ‘kills’.

Perys tried to shake free of such thoughts, reminding himself that they should now be consigned to history. Europe was once more at peace. It was time to forget the past and go in search of the future.

It would not be easy.

Turning away from the window, he glanced at the open labour books and limped to the desk to close them.

His glance fell upon one of the names, and he paused as it provoked other memories. Memories of someone whose name would not be found in this book - or in any of the others.

Although inextricably woven into the pattern of the great house and its lands, the incidents he recalled were so far removed from the Heligan of 1918 that they might have taken place a million miles away . . .

The train which brought Perys Tremayne from London to the Cornish town of St Austell in the summer of 1914 was painted in the gleaming chocolate and brown livery of the Great Western Railway. A brass plate curving around a wheel arch of the polished green locomotive proudly proclaimed that this was the City of Truro.

Almost nineteen years of age, Perys stepped down from the carriage dragging a large leather suitcase after him. He glanced uncertainly along the long platform. The Tremayne family had large landholdings in Cornwall, but it was his first visit to the area.

‘Can I take your suitcase, sir?’ A uniformed porter put the question to him.

‘Yes . . . no!’ Perys contradicted himself and hurriedly explained, ‘I’m expecting to be met by someone from Heligan.’

‘Ah! You’ll be the young Master Tremayne. Martin Bray, the Heligan coachman, is waiting for you farther along the platform. He and I were talking before the train came in. He said I was to look out for you.’

As he was talking, the porter relieved Perys of the heavy suitcase. Picking it up with difficulty, he began walking in a lop-sided fashion along the platform towards a liveried coachman who was hurrying to meet them.

When porter and coachman met, the suitcase changed hands once again. As the porter pocketed the coin Perys handed him and touched his cap, the coachman said, ‘I’m Martin, one of Mister Tremayne’s coachmen. I trust you’ve had a pleasant journey, Master Perys?’

‘It was quite enjoyable,’ Perys replied, ‘but I didn’t expect to have a carriage here to meet me!’

‘Ah well, you chose a good day to arrive. As you might know, you have an aunt and her two daughters staying at Heligan at the moment. They’ve had dresses altered for a ball and I was told to pick them up while I was in Saint Austell. They’re in the luggage box of the carriage. I’d have collected them in the pony cart and you with ’em - but it’s looking as though it’s going to rain. Your aunt didn’t want to risk getting the dresses spoiled, so I was told to bring the light carriage.’

Perys had been unaware that other members of the Tremayne family were staying at Heligan House, and might have been offended by the presumption that dresses were more important than he, but the thought never occurred to him.

In the eyes of the Tremaynes they would have assumed more importance. Perys belonged to a branch of the family only just close enough to the squires of Heligan to be acknowledged as possessing a right to the ancient family name. What was even worse, his mother had committed the unforgivable sin of loving another cousin rather too much.

The family had frowned upon their increasing affection for each other, and they planned an elopement. Unfortunately, fate was to play a decisive role on behalf of the family. The cousin Perys’s mother intended marrying died in a tragic shooting accident. Eight months later, Perys was born into a life that would always be coloured by the disgrace his mother had brought upon the family.

When Perys was eight years of age his mother died of lung fever, but the shame did not die with her. It was transferred to her son.