The Pleasure of Eliza Lynch 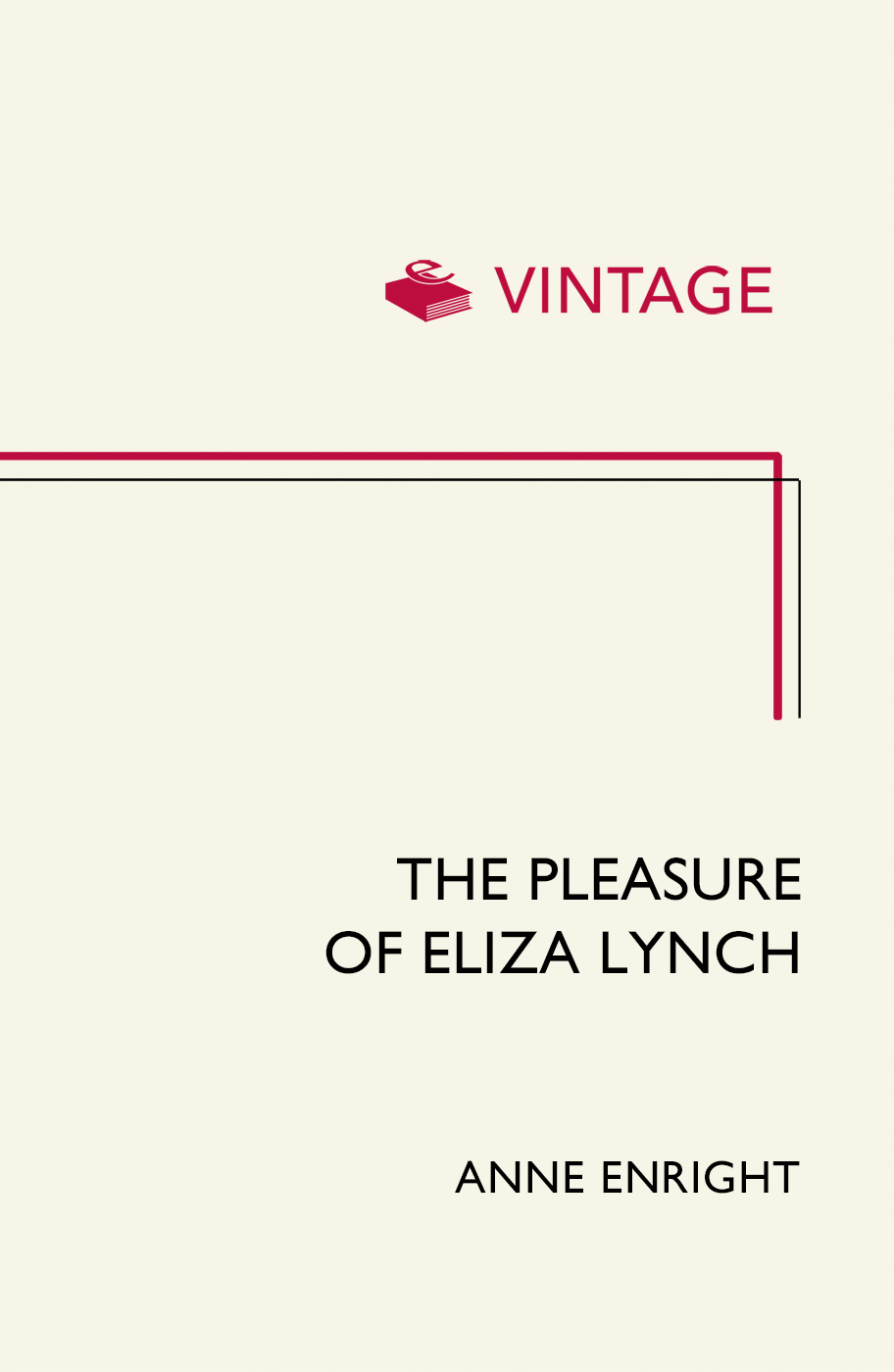 Beautiful Irishwoman Eliza Lynch became briefly, in the 1860s, the richest woman in the world. The book opens in Paris with Eliza in bed with Francisco Solano López – heir to the untold wealth of Paraguay. The fruit of their congress will be extraordinary, and will send her across the Atlantic on the regal voyage to claim her glorious future in Asunción.

With the lavish imaginative richness of Márquez and the crazed panoramic sweep of Herzog,
The Pleasure of Eliza Lynch
is a bold and brilliantly achieved novel about sex, beauty and corruption and the end of the old world.

Anne Enright was born in Dublin, where she now lives and works. She has published two collection of stories, collected as
Yesterday’s Weather
, one book of non-fiction,
Making Babies
, and five novels, including
The Gathering
, which was the Irish Novel of the Year, and won the Irish Fiction Award and the 2007 Man Booker Prize, and
The Forgotten Waltz
, which was awarded the Andrew Carnegie Medal for Excellence in Fiction. She is the inaugural Laureate for Irish Fiction.

The Wig My Father Wore

The Granta Book of the Irish Short Story
(editor)

This is the story of how she buried him with her own hands, on the slopes of the Cerro Corá.

FRANCISCO SOLANO LÓPEZ
put his penis inside Eliza Lynch on a lovely spring day in Paris, in 1854. They were in a house on the rue St-Sulpice; a famous street, down which people have always strolled in a state of pleasant imagining. In the spring of 1854, no imagination was needed as Francisco Solano López pushed his penis into Eliza Lynch and pulled it back again, twenty times in all. This was quite a lot of times for Francisco Solano López, but something about Eliza Lynch distracted him from the usual rush of his pleasure. Something about Eliza Lynch gave him pause.

Outside, the birds sang, trees rustled and fancy carriages rattled by. Inside, the four-poster bed was hung with turquoise, its enormous baldaquin billowing above them and gathered into a pucker of silk that mirrored, as she lay under it, the lovely navel of Eliza Lynch.

Apart from the magnificent bed, she had nothing. There was a burled walnut box pushed into a corner, an ormolu clock ticked on a mantel of ordinary stone, a simple table of inlaid tulipwood was burdened by a statue of the flagellated Christ. The room was practically bare, if you did not count the bed. But the bed was overwhelming, it was a room
within
the room; it was a palace, across whose yielding floor López crawled, laughing, in order to engage more thoroughly with the laughing Eliza Lynch.

Which, without further delay, he did.

Many people would come to regret this moment. You might say that everyone came to regret it – except for the two participants, Francisco López and Eliza Lynch, Il Mariscal and La Lincha, Paco and Liz. Already unreal. They were the kind of people who attracted stories – not to mention bias, rumours, lies, rage: the whole tangle pulled into a knot by time, made Gordian by history. The details cannot be unpicked. But this much we may not doubt: there was a joining of parts, and it happened in spring, on the rue St-Sulpice.

Paco and Liz, laughing on the bed. Mme Lynch silently looking at the silently looking Señor López. The tart from County Cork turning towards the turquoise, as the little mestizo handles it into her. It was a moment that garnered the blame of nations, as if everything started here. Something did start here – there are such things as beginnings – but what? But what?

They became lovers. In jig time, in marching time, in twenty beats, they moved from strangers to the rest of their lives. And they knew it. Such luck!

Who was he? He was heir apparent to Paraguay, a country that no one had ever heard of. Who was Eliza? She was very much herself. He had come to her house in order to improve his French, or so he said. The words he learned that evening were ‘King of Diamonds’, ‘Queen of Spades’, ‘trick’. He learned the French for
sons of bitches
,
then
truffles, pig’s nose
and
tongue
. Also a phrase: ‘If I win, you will not like me.’ After which pleasant nonsense, they went to bed.

Oh Eliza. In fact, she did speak many languages: she romped in French, married in English, and she ate in the Irish of her childhood kitchen. She had school Latin and spa German, but her fate, now, was in Spanish, and she would die in Guaraní, which is to say, obscurely. The lover in her head spoke Russian, in whispers. The devil in her head spoke Portuguese.

He was immensely rich.

He had ordered, that day, seventy pairs of silver-tipped boots – with presumably elevated insoles; because he was small, there was no gainsaying the fact that he was really quite small, but he was stunningly rich, so she, spilled out beneath him, must be magnificent.

It would not do to shout. Whatever surprise she felt at this, most surprising, intrusion must register as a mere stretch of her eyebrows, a fullness of her jostled mouth; her forehead suffused with a kind of puzzled tranquillity,
as
though the question – whatever question it might be – answered itself.

There was no telling how long he would take.

His hair smelt of lilacs and horses. His breath smelt of decay. His shirt was pulled impatiently open at the neck and a filthy leather pouch dabbed at her chest. Money? No – his money was folded and stuffed down the side of his boots. Vast sums. There was a flurry of paper when he dumped them, all unheeding, on the floor. Then his short military jacket; crusted with gold braid and held to lopsided attention by the remarkable epaulettes. After which his pants. His legs very thick and gnarled. His shirt dangling down.

She was wearing her sapphires. Also a
peignoir
of shrugged-off silk. It flowed down her arms and moved under her, like water.

She must be his first woman in weeks. In Paris the whores would laugh at him, of course – that is why they were paid so much. Cora Pearl with her whip. Or Dolores at the Café Anglais with her diamonds and a bloody cough. Because they were all dying. Death in the bedroom and death again at the card table, where they would take his money, trick after trick. Here is the fool in from the colonies, let me introduce you to … M. le Duc de something he would not catch. Some ghoul of a German banker. A tart with diamonds in her hair, sitting in to watch. And if he tried to touch her, she would laugh in his face. The game continuing in silence. The stakes going up and up. The tart not laughing, any more. Up, and up and up.

He reared away from her.

She might bite him. She might tear at his bottom lip, if it were not for the terrible breath. When he walked into her drawing room, you could smell it from the doorway. No idea of where to sit or how to stand, until she took his hat in her own hands and said, quite natural-like, that he must leave it beside him here on the floor. This was what they did in Paris, she said to him, these strange Frenchmen, they left their hats on the floor so everyone could see their names in gilt letters written on the band – she spent her first weeks in town convinced that everyone was called Ruget, which was the name of the hatter. She laughed. Tra la la. Then she paused, rising in a rustle of silk, as though arrested, briefly, by the sight of his lap.

She pulled the shirt, with rough fingers, up the length of his back.

She arched her own back and said, ‘Oh’.

Everyone must take a lover, so they would know how to sigh and when to turn. It was an investment. Everyone should love once; there was no other way to learn. Eliza had wanted to love sweetly, hopelessly, but she loved like bad weather. And she only loved once. There was no use closing your eyes and thinking it was him. There was no use closing your eyes and thinking. But she did close her eyes, and saw López’s head briefly above her, his eyes red coals, his brain molten, his hair black flames. She opened them again, quickly, and was relieved to see flesh. Only flesh. Francine, outside, forgetting to bank the fire for the morning, as she always did.

He spread his cards down on the table and looked at her. A good hand. A very good hand. He took the ace of hearts and started to cut out the centre of it with his little knife.

‘I have kissed the hand of the Empress Eugénie,’ he said. He described the ring she wore – a sapphire set with diamonds in a fleur-de-lis, over more diamonds and a pearl.

The Emperor Napoleon had pinned a ribbon on his breast. He put his arm about his shoulders and walked him personally to the door. Along the enfilade, thirty footmen pretended not to notice the fraternal kiss, man to man, soldier to soldier, nation to nation, as he took his leave.

Myriah Fire by Conn, Claudy
Little Apple by Leo Perutz
More Than Her by McLean, Jay
The Cat of Christmas Past by Kathi Daley
The Green Mill Murder by Kerry Greenwood
Cry of the Curlew: The Frontier Series 1 by Peter Watt
Moore To Love by Faith Andrews
No Rules by R. A. Spratt
Quiver: Watched by Shadows (Quivering Shadows Book 2) by Rook, Livia
Dream Smashers by Angela Carlie
Our partner