All these years later, Anna had forgotten what had inspired her to leave all she knew behind. But as the orange disc of the sun slowly dipped toward the west, she realized just how much she had already discovered—and that the adventure had just begun.

“I remember, Grandfather,” she whispered aloud. “I remember.”

Anna turned to see
el tirano
, Albie Kellar, staring down at her with a smile on his face and tears in his own eyes.

She asked him what it was and Albie started to tell her, but the lump in his throat caught hard, and he found himself unable to speak. So he only pointed to the spot on the horizon where the last vestige of smog had somehow shaped itself into— “It looks like a sign,” said Anna.

“Doesn’t it?” Albie whispered, finally able to choke out some words. “Just like this old road sign in the town where I used to live.”

Albie tried to explain that he’d spent his twenties traveling the world, and how on the day he returned home to take a so-called real job, he’d scribbled “I’ll be back” on that road sign. But the fact that he’d never fulfilled that promise overwhelmed him with sadness and regret. Anna pulled out a small plastic bag stuffed with Kleenex, and was handing one to Albie when the local bus pulled to a stop.

“It’s about time!” grumbled several of the other passengers as they filed onto the bus. But for Albie Kellar, who normally would have been one of those grumblers, the anger that had marked his day had faded. All he wanted to do now was share his story with someone—if only to remember every last detail of the man he used to be, and could still become again.

“Thank you for the tissue,” Albie said to Anna as he followed her up the steps.

Anna took a spot in the middle of the bus. She looked down at the empty seat next to her, then back up to the man she had once known as
el tirano
.

As the bus pulled away and disappeared into the night, one passenger remained seated on the bench. It was the kid with the hospital scrubs and the headphones—and even though the music was turned up as loud as it could go, he couldn’t hear a single note.

Only one trained in the inner workings would have been able to recognize that Rotating Dusk had begun, and Cases like Anna’s and Albie’s were playing out all across The World. But as he studied the Strokes of Genius that stood out like ornaments on a Christmas tree, Briefer Carmichael never considered that one of those Cases might be him.

Not only was med school a mighty challenge but Frau Von Schroëder—his closest friend from the IFR—had leapfrogged him and been unexpectedly promoted to Fixer. Though he was happy for the Frau, he couldn’t help but think that everybody in Fixing circles took it as a sign that he wasn’t good enough for “the best job in The World,” and he was starting to believe it himself. Until he saw something in the upper-right corner of the sky . . .

It was a sloppy dollop of a cloud, malformed and with not nearly enough Fluff. But what it did have was a massive burst of Confidence, all of which surged through his mind and body at once.

“I’m Harold C-Note Carmichael!” The Briefer rose to his feet and shouted to no one in particular. “Second-highest score on the Practical of all time!”

As C-Note remembered that triumphant day when he’d been granted his Briefer’s badge, he also reflected on the tenuous state The World was in. Whatever the words “specific and credible threat” referred to, it was definitely not good. But even though he wasn’t one of the thirty-eight who held the title of Fixer, thanks to this glorious Sunset, the pride of Baldwin Hills would be ready if duty called.

C-Note was looking around for somebody to give a high-five to when he noticed something else in the sky, just below and to the right of his Confidence. It didn’t look like clouds, though. It looked more like letters . . .

A new feeling surged through C-Note. He reached down onto his belt and pulled off a small black device known as a Blinker. It came with a host of functionalities, one of the best of which was real-time messaging to anyone in the crew. He toggled down the Duty Roster to Fixer #37 and began to type in a text, “Thx! I needed tht.”

Harold Carmichael smiled and waited patiently for a response, which came only a few seconds later.

“No sweat,” texted back the Fixer known as Becker Drane. “Catch u on the Flip Side.”

1
. All Tools copyright © the Toolshed, the Institute for Fixing & Repair (IFR), The Seems, XVUIVVI. For more information, please see: “Appendix C: Tools of the Trade.”

2
. The process by which Goods & Services produced in The Seems are converted by the Fabric of Reality into aspects of The World. 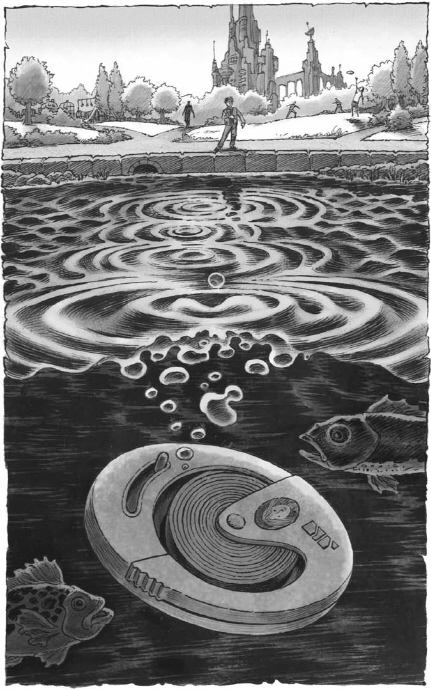 Becker Drane’s life was pretty much always this exciting.

Not only did he have “the best job in The World,” but on the day he turned thirteen, Becker’s allowance doubled, his bedtime was pushed to “it’s up to you,” and his need to sneak into PG-13 movies was rendered obsolete. Best of all, he had finally hit a growth spurt, transforming him from a small kid with old-school corduroys and shaggy hair to a medium kid with old-school corduroys and shaggy hair. But although his newfound lank granted him an extra gear on the soccer field and an added measure of respect from the Melvin Sharps
3
of the world, it didn’t mean that all was well.

The stresses of leading a double life had definitely begun to wear on him. Becker’s grades had continued to suffer— dropping precipitously close to a C-plus average—while the pressure of having to save The World every six weeks or so had caused him to drop a few pounds and have noticeable bags under his eyes. His parents and teachers constantly asked him if everything was okay and he knew the unspoken suspicion centered around a host of possible maladies, including but not limited to: the Internet, video-game addiction, male anorexia, and clinical depression.

Much harder to deal with was the strong sense of disconnect that had slowly wormed its way into the Fixer’s life. When Chudnick and the Crozier boys wanted to trade MP3s or talk about girls, it was like he just couldn’t join in the fun. He tried to confide in his co-workers from The Seems, but even though they were cool and interesting, they were all much older than he. In fact, the only regular kid that Becker could be honest with was his brother, Benjamin. But even that was tainted, since the seven-year-old believed The Seems was just an intricate fantasy world that his brother had dreamed up.

Sooner or later, Becker needed to find someone to talk to— and he knew who he wanted that someone to be.

The Atrium, The Big Building, The Seems

“Five minutes, mates!” A voice with a familiar Australian accent echoed over the loudspeaker. “Five minutes till we’re back!”

Becker polished off his Dazzleberry muffin and admired the glass-enclosed atrium. This was the lightest and airiest part of the Big Building, used for conventions and cocktail parties, and it was filled with all sorts of custom-designed flora that the Department of Nature had been kind enough to donate. Intermission was almost over and Becker was preparing to head back for the Monthly Briefing when a voice whispered from behind the Zen rock garden.

Becker turned to see a scraggly janitor, casually mopping an already clean spot on the marble floor. He was wearing a Big Building jumpsuit with a Blue Collar around his neck— signifying that he was a master of the custodial arts—but anyone who knew would know that Brooks was in The Know.
4

“I thought I said
after
the meeting,” Becker replied, peeking over his shoulder to make sure no one else was looking.

“Sorry, kid.” Brooks dipped his mop back in the slop. “You’re not my only customer.”

Becker strolled over to the rock garden as if he’d just noticed a diamond wedged between two stalks of bamboo.

“The question is, did
you
get it?”

Becker took another cautious peek over his shoulder, then reached into his Toolkit. But instead of producing one of the Toolshed’s finest innovations, he pulled out a white bag with an onion-heavy smell emanating from somewhere within. “Of course I got it. The System’s open 24/7.”

Inside the bag was a California Cheeseburger and an order of fries (salt, pepper, ketchup) from the White Rose System, the best fast-food establishment in central New Jersey and arguably the entire World.
5
Brooks tore off the tissue paper wrapping and inhaled half of the burger in a single bite.

This was the truth. Though the Seemsian Food & Drink Administration had done its best to replicate fast food—one of the few creations that The World can call its own—it had never quite perfected the ratio of grease to Love. And while the Fixer hangout known as “The Flip Side” produced a mouth-watering burger, it was more of a gourmet experience.

“I held up my end of the bargain,” Becker reminded his contact. “Now you hold up yours.”

“Take a Chill Pill, Drane.” Brooks cleansed his palette with a swig of vanilla shake, then pulled something from his pocket. “I got what you need.”

It was a small circular cartridge, with the letters “JK” written on them in white Sharpie marker.

“How is it?” asked the nervous Fixer.

“Don’t worry. You’ll be happy with the merchandise.”

Becker already was, and couldn’t wait to pop the cartridge into his Blinker. But before he could find a quiet corner, an eighty-three-year-old South African woman cheerily waved from across the room.

“Come, dear,” said the Fixer known as the Octogenarian. “Time to finish up.”

On the other side of the atrium, the rest of the Duty Roster were filing back toward Central Command for the second half of the Briefing.

“Thanks, man,” whispered Becker to his shady cohort. “Same time next month?”

“Bet,” replied Brooks, polishing off the rest of the Cali Cheese. “And next time grab me a pork roll too.”

The two confidants shook hands on the deal, and Becker was about to rejoin his fellows, when his growling stomach forced a final request . . .

In the basement of the Big Building, some five hundred floors below the Powers That Be, was the fortified ops center known as Central Command. Here, highly trained personnel monitored the health and well-being of The World on a moment-by-moment basis, making the final determination of whether or not to send in a Fixer (and Briefer) when a problem arose. And it was also here that each month the entire Roster gathered in the Conference Room to discuss any new or pressing developments.

This month’s meeting had been pretty much business as usual, concentrating on a recap of last month’s Missions and the ongoing transition from the Door system to the newly ratified Skeleton Key™, which had revolutionized how commuters traveled back and forth between the worlds. Instead of searching for a series of scattered portals, they could now insert the handy Tool anywhere in the Fabric of Reality and open a seam directly into the In-Between. The only problem was, the group charged with phasing out the antiquated Doors was the same group who used them most often.

“I don’t know about you guys,” chirped No-Hands Phil, Fixer #36 on the Rotation. “But if I have to seal up another one of these Doors, I’m gonna apply for a job at Home Depot!” Phil’s feet were kicked up on the conference table and his eye patch barely hid his prickly attitude.