“Yeah, pretty freaky, huh?” Becker was glad the conversation had turned back toward business. “It’s gonna be a long seven days.”

“With people like you on the job, The World is in safe hands.”

“I, too, had a meeting at the Big Building today.”

“With the Second in Command herself.”

That was surprising, because the leading voice of the Powers That Be rarely had time for face-to-faces.

“I’ve never met her personally,” said Fixer Drane. “But I hear she’s quite a woman.”

“To say the least. And she had some very interesting things to report this morning.”

“Excuse me, sir?” Becker scanned Fixer Blaque’s face for any trace of a smile—for he was known to enjoy pulling his old Candidates’ legs—but the trademark blue shades concealed all.

“I was quite surprised myself. Especially when she informed me that one of the best students I’ve ever trained was on the verge of breaking the Golden Rule . . . and, in fact, may have already done so.”

Becker’s mind raced for some kind of excuse, but he didn’t want to tell another lie.

“I assured her,” Blaque continued, “that this was just a phase my former student was going through—perhaps due to his age and the difficulties of maintaining a secret life. I also assured her that this phase would immediately be ending, and would in no way compromise his ability to carry out his duties in the field.”

Becker could read between the lines as well as anyone, and there was no wiggle room whatsoever. But that didn’t make this moment any easier.

Fixer Blaque’s face softened and for a moment he returned to being Becker’s mentor and friend.

“I know how it is, son. I’ve even been there myself, many years ago. But the Golden Rule is golden for a reason.” Blaque bent down and picked up a thin skipping stone from the ground. “As emissaries of The Seems, we are in a position of great power when it comes to the private details of people’s lives, and this power cannot be abused. Even when it seems like the right thing to do.”

Blaque flung the rock and it skipped across the glassy surface of the pond.

“That was at least nine,” the Instructor mused.

“I counted ten, sir.” As Becker looked around for a rock of his own, he felt a heaviness in his chest. “I just wanted to make sure she was doing okay, y’know? Because things were so hard for a while.”

Becker shrugged. “It’s not that bad.”

“You haven’t even been at this job for a year, Mr. Drane. You can’t expect to have figured out the balance between work and personal life in that short a time.” Blaque watched Becker’s rock fail to skip at all. “And sometimes I think you forget you’re only thirteen years old.”

“Yes, sir.” Becker forced a grin, remembering his Elevation Ceremony, when Blaque admitted to the same mistake. “Sometimes I do.”

“Regardless, I expect you to cease all activities relating to this Case. That includes World-based communications, and especially your relationship with certain people in The Know.”

“Good.” Jelani Blaque gripped the brass handle of his walking stick with one hand and gave Becker the IFR secret handshake with the other. “I’ll leave it up to you whether you want to take one last look at the piece of information in your pocket. Or not.”

Their hands were still clasped and Blaque gave him an extra squeeze, which Becker interpreted to mean “It’s gonna be okay.” And he surely hoped it would.

As Becker’s instructor slowly vanished into the woods, probably on his way back to grade papers at the IFR, the boy from Highland Park pulled out the small circular cartridge that contained the most recent data about the life of a thirteen-year-old girl. All he really wanted was someone to hang with or talk to on the phone about stupid stuff, but the most important thing in Becker’s life was the job that he had as Fixer. And if he wanted to keep that job, he had no choice but to do one thing: forget that he’d ever heard the name of Jennifer Kaley.

“It was nice knowing you.”

Without taking another look, Becker chucked the cartridge into the pond. It skipped three times, then fell beneath the water.

4
. A secret society that trades in Plan-sensitive information. Though technically considered a criminal orga nization, they are often a Fixer’s ace in the hole when normal channels just won’t do.

5
. Though some believe it has gone downhill ever since Frank sold the place.

6
. All Fixers and Briefers make regular use of the Tool known as the Sprecheneinfaches™—a thin sheath attached to the tongue that allows them to speak in a language that everyone can understand (while still maintaining ethnic and regional flair).

7
. Though accused of violating the Rule of Thumb on his first Mission, Fixer Drane was ultimately cleared of all charges by the Court of Public Opinion. 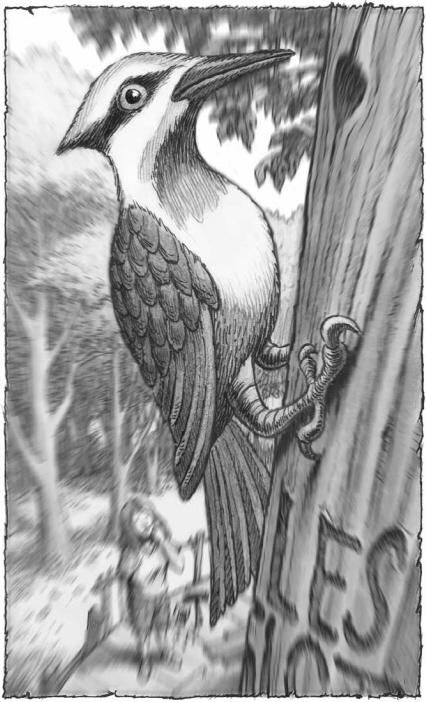 Time to Make the Zeppole

Exactly seven days later, Becker lay in what might be described as a mild coma beneath the covers of his bed.

“Becks, are you ready to go?” Dr. Natalie Drane’s voice reverberated through the floorboards of the house and into the room of her eldest son. “We’re hitting the road in five minutes!”

That wasn’t quite consistent with the facts. It was nearly eleven in the morning, and while the rest of the Drane clan was packed and ready for their annual vacation to Cape Cod, Becker could not bring himself to move. This was one of the telltale signs of depression, as was an overwhelming sense of sadness—both of which he was exhibiting today.

Becker’s mother appeared at his bedroom door, sunglasses on and car keys in her hand.

“I can see that.” Natalie pulled off her shades and did not look amused. “I mean, why aren’t you ready to go?”

“Why? That’s a very complicated question.”

Indeed it was. Not only had Becker been forced to toss the info regarding Jennifer Kaley, but during the upcoming week, he would be missing Connell Hutkin’s pool party and the Highland Park Street Fair. Instead, he’d spend the foreseeable future frequenting crab shacks, playing Parcheesi, and suffering through long days at the beach with the lovable yet longwinded Dranes of New England.

“Ferdinand!” Becker’s mom called downstairs to her husband. “Your son is having some sort of existential crisis up here and since I deal with this every single day of the year
except
my vacation, you’d better come up here
now
!”

Natalie flashed her son an angry look before turning and starting to hum the song “Vacation” by the Go-Go’s, which Becker only knew because she forced the family to listen to the same song every year as they pulled out of Highland Park. The music faded down the hallway, replaced by the pounding of his father’s footsteps up the stairs.

Becker could feel his father standing in the doorway, and he knew that Professor F. B. Drane was probably fiddling with his beard or adjusting his glasses, which is what he always did when he was perturbed.

“No,” Becker managed to mumble.

“Good. So I expect you downstairs and packed and in the back of the car in the five minutes your mother just gave you.”

Becker heard his father take a few steps into the hallway before turning back to the bedroom.

“Seriously, buddy. Are you okay?”

Becker waited for the Rutgers University professor of mathematics to leave, then finally managed to swing both of his legs onto the floor and drag out his backpack from under his bed. He was just starting to stuff in his bathing suit and aqua-socks when—

“You have issues, dude.” It was his little brother, Benjamin, seven years of precociousness all crammed into one little body. “Maybe you should see a shrink, and I don’t mean Mom.”

Becker’s answer was to huck a Nerf basketball straight at Benjamin’s head, nearly decapitating him.

Becker flinched again, sending Benjamin hurtling out of his room and back down the carpeted stairs. The Fixer took a deep breath, mentally calculating how to pack, shower, and grab his Toolkit all in the remaining three minutes and 12 . . . 11 . . . 10 . . . 9 . . . seconds, but he couldn’t stop himself from thinking about Jennifer Kaley. Where was she? What was she doing now?

And was she okay?

“And make sure the OJ is fresh squeezed!” Steven Kaley shouted to his daughter as she headed for the door.

“Anything else, Dad?” Jenny chided her father. “This is the third time I’ve been to Norm’s in the last two days!”

Jennifer Kaley’s parents had been stressed out all week about the partners brunch that would be taking place in roughly an hour, but the fact that she’d been able to keep the change on every shopping trip more than made up for the tension in the house. This time her father had given her a Jefferson, which, if she spent wisely, would leave her enough to purchase some supplies for her own big day.

“Pick up six jumbo eggs while you’re there.” Her mother already had over a dozen, but better safe than sorry. “I promise, sweetheart, this’ll be the last time.”

Jennifer skipped outside and began the pleasant jaunt to Norm’s Great Grocery. When she had first moved to Caledon, these streets had seemed like the worst kind of suburban wasteland, filled with tasteless McMansions and the shallow people inside. But in the months that followed, she began to realize that a lot of those first impressions were judgments she had placed upon the town, and weren’t necessarily the way it really was.

“Hey, Mr. Krakower!” Jennifer waved to a heavy-set man on a riding lawnmower. “Need anything from Norm’s?”

“How ’bout a winning lottery ticket!”

Getting to know the neighbors had been a piece of cake for the easygoing thirteen-year-old, but the transition to life at her new school had been much rockier. Not only did she have to leave all her best friends behind, but a few of the meaner kids had singled her out because she didn’t wear makeup and had patches from bands that no one had ever heard of all over her knapsack. Pretty soon she didn’t even want to get out of bed, let alone walk the halls while everyone snickered behind her back.

All that started to change, however, on the night she had this really weird dream. A boy claiming to be a Fixer had invited her to a place called “The Seems” and given her the grand tour. According to Becker (she couldn’t for the life of her remember his last name), the world she lived in wasn’t what she thought it was, but actually something much, much better. It wasn’t like she actually believed it, but imagining all these people dedicated to “The World” made the real one a pretty fun and sparkly place to be.

Not to mention that whole thing about “the Plan.”

“Hey, JK!” A short Indian kid in glasses was shouting at her from the driveway of his parents’ house. “We still on for today?”

In the Claws of the Tiger by James Wyatt
Fata Morgana by William Kotzwinkle
My Foot Is Too Big for the Glass Slipper: A Guide to the Less Than Perfect Life by Gabrielle Reece
The Man in 3B by Weber, Carl
Needing Nicole (The Cantrelle Family Trilogy Book 2) by Patricia Kay
Epic Escape by Emily Evans
Works of Alexander Pushkin by Alexander Pushkin
Dream Dancer (Ghosts Beyond the Grove Book 2) by Elbel, Joy
Truth or Dare by Misty Burke
Make Me Forget by Anna Brooks
Our partner