So did Casey Lake, the Belgian in the White Tuxedo, Sweet Lou, and thirtysome other Fixers around The World (and hopefully Tom Jackal), all of whom at this exact moment had stepped away from their motorcycle rally, laboratory experiment, morning mass, or lifelong search for an ancient artifact and waited for the shrill beeping of their Blinker to go off.

But only one Fixer heard it.

“Not again!” cried Mrs. Chiappa. She and her husband had just sat down to dinner, their modest wooden table filled with fresh-baked breads and fruit. “You haven’t even had a bite to eat!”

“I’m sorry,
tesorina
,” Mr. Chiappa apologized. “This will surely be the last one.”

Many years ago, Lucien Chiappa had received a special exemption to the “Keep Your Mouth Shut” Rule, for he had promised his wife on the day of their wedding that he would never keep a single secret from her. That didn’t make it any easier, however, for she was sick to her stomach with worry every time he went on a Mission.

“Don’t they know you’re supposed to retire in four days?”

“Of course they know,” Lucien answered. “I’m sure it’s just a broken Window or a Foible.”

He hated to fudge the truth to Ombretta, but as he kissed her on the forehead and adjourned to his office in the attic, he knew he couldn’t tell her what was really going on. Pushing aside the schoolbooks and lesson plans, the high-school English teacher unclipped the Blinker from his belt and placed it atop his desk. It was still flashing vehemently, and in his heart of hearts he sensed what had happened in The Seems and why they had chosen him. Part of him was proud to have that responsibility, but another part just wanted to turn in his Badge, attend the farewell gathering at Flip’s, and ride off into the Sunset. The Plan had other ideas, though.

Fixer #12 pressed the yellow Accept button and his Blinker began to transform. Audio would come first—a high whine settling to a low hum—which would soon be followed by the image of a double-sided wrench. As he waited for the Dispatcher to tell him what he already knew, Mr. Chiappa softly whispered in his native Corsican, “Time to make the
zeppole
.” 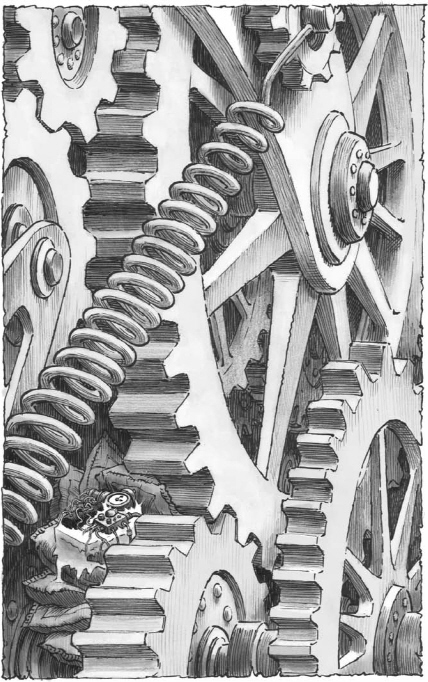 Lucien Chiappa’s career as a Fixer was solid but largely undistinguished. He was generally known for being a workmanlike presence, with no grand disasters on his record, and also for his hobby regarding Time. Ever since he’d tasted his first Déjà Vu and felt like he’d had one before, the English teacher was fascinated by this Department and the way in which it aged The World to perfection.

Perhaps this is why he was called in on the Day That Time Stood Still, when a Glitch overwhelmed legendary Fixer Tom Jackal and caused the entire World to grind to a halt. Mr. Chiappa’s remarkable stratagem was to create a device that could generate enough force to get the whole thing moving again.

He called it a “Time Bomb.”

“Now arriving, Department of Time, where it’s always now. Please watch the gap between the train and the platform.”

The computerized voice of the monorail echoed through the empty car and the doors whisked open, sending Fixer #12 onto the concrete platform that overlooked Time Square.

The main hub of this Department was a quaint village, like one would find tucked away in the mountains or nestled by the shore. There was a small park in the center and the cobblestone streets were lined with shops and stores. Daylight Savings Bank (FDIC) was the most dominant feature, with its marble columns and massive sundial, but the Second-Hand Store, Time in Memoriam, and the Around the Clock Diner were institutions in their own right and attracted visitors from all across The Seems.

“Where is everybody?” Mr. Chiappa whispered to himself, unable to shake the awful sense of foreboding. On most days, this place would be jammed with street vendors or customers sipping lattes at Magic Hour—the always crowded coffee shop on the southwest corner of Memory Lane. But today the streets were empty and all the stores shuttered up tight. “Hello?”

As if in response, he heard a creak, and turned to see someone stepping from a door in one of the alleys. It was a Chinese girl, no more than nineteen, with jet black hair and a laminated Badge on her chest.

“At ease, Shan,” said Chiappa to his Briefer. “I know who you are.”

Indeed he did. Shan Mei-Lin was known in IFR circles as the fastest Candidate ever to make it to Briefer, and she showed no sign of letting up. Her gear was immaculate—the newest jumpsuit from the Catalog, a red voice-activated Briefcase G5—and her wiry frame conditioned like a long-distance runner. There was one other thing that Chiappa also knew about Briefer Shan— she was decidedly type A. Her strict professionalism and adherence to the Rules sometimes made her an exhausting presence.

“I’ve evacuated all nonessential personnel and Administrator Neverlåethe is awaiting your arrival.”

“Well done. Are the Minutemen here yet?”

“Affirmative. Their best man went in for a look, but says he’s way out of his league.”

Chiappa shook his head, still in shock that this Mission had come only four days before his retirement. He had almost allowed himself the fantasy of the next school year, when he would finally have time to revise his lesson plans and watch bad TV and eat popcorn with his wife. But here he was, in a very different sort of Time and place.

“They’re waiting for you, sir.”

Chiappa snapped back to the present moment, resolving that to fight what was so was pointless. Not only that, it could cost The World dearly.

“Then let us not keep them.”

Back down the alley and through the door with the faded grandfather clock was a long, dimly lit hallway with public restrooms on the side and an ordinary black swipe pad at the end. Anyone with clearance of eight or above could gain access to a second corridor, which led to a spiral staircase that had another black swipe pad at the bottom, which demanded clearance of nine to gain entrance to the sprawling underground bunker where the machinery of Time Management was housed.

The first corridor had been empty, but the second was lined with Minutemen, whose job it was to handle the very Essence of Time. This was one of the most dangerous positions in the entire Seems, given to only the most sturdy of souls. But today they looked ashen-faced and shaken, and very few could muster up the courage to look Chiappa in the eye as he passed.

“Go get ’em, chief,” said the obvious leader of the group, his visor popped open to reveal a sweat-soaked face. “This one’s got your name written all over it.”

A few others offered words of encouragement, but for the most part the stricken employees just chewed their Trouble Gum™. Like Chiappa, they had dreaded this day, but had never believed it would actually come.

At the bottom of the spiral staircase was a man of light complexion, with bright blue eyes and wispy blond hair . . . also known as Permin Neverlåethe, Administrator of the Department of Time. Like all of his rank, Permin wore a three-piece suit and a pocket watch, but his Time Piece™ was unique in that it showed World Time in all four thousand and twelve Sectors.

“Good to see you again,” said Fixer Chiappa, shaking the Administrator’s hand. “If only it were under better circumstances.”

“Lucien, how could this have happened?” If Permin had been any whiter, he would have been transparent. “I thought we destroyed the blueprints!”

On that terrible Day That Time Stood Still, it was Permin Neverlåethe, then a manager at Daylight Savings, who assisted Chiappa in constructing the mechanism that restarted The World. But though their Mission had been successful, it had not come without a price.

“I knew this would come back to haunt us.” Permin was on the verge of tears. “We should have never built it in the first place!”

“Of course we should have, Permin.” Chiappa put his hand on his old friend’s shoulder. “Now, just calm down and tell me what happened.”

Though the gears of Time were quite a sight to behold, they were largely ceremonial. This system of towering cycloids, dangling weights, and brass pinions no longer pumped the Essence of Time. Yet, for obviously symbolic reasons, The Tide had chosen this hallowed ground on which to strike their latest blow.

“The first anomaly caught us completely off guard,” said Administrator Neverlåethe over the roar of the spinning gears. “It looked like just a Slowdown in a few of the Sectors, but then it happened again—followed by a couple Speedups.”

Slowdowns and Speedups were malfunctions that involved elements of The World moving through Time at wildly different rates. They were usually caused by flow-management issues in the pipeline that pumped Time over to Reality, but were typically resolved before anyone in The World would notice.

“We thought we had things under control,” Permin continued. “But then there was a Timeout for four minutes and twenty seconds!”

“I thought that was weird,” added Briefer Shan. “I was rereading
Ulysses
and the next thing I knew I was lying in bed. I didn’t even know how I got there.”

Chiappa had had a similar experience. He’d been peeling potatoes at the kitchen sink and suddenly found himself seated at the dinner table—but he had written it off as daydreaming or a “senior moment.”

“A skippage of that magnitude is no accident,” said the Fixer. “The Tide must have infiltrated the department and blocked the flow of Time.”

Permin dropped his head in a mix of sadness and disgust, for this was a very proud department, as the sign above the entrance to Time Management declared:

“Now I realize it was all just a distraction,” Neverlåethe pointed to a crawl space between three of the largest gears. “One of the tour guides spotted it when he was dusting up for today’s show.”

Tucked in between the whirring clockworks was a complex device that bore an eerie similarity to Chiappa’s original invention. The timer was a simple alarm clock, which was duct taped to a titanium freezer caked with ice and frost. Inside were no doubt those missing trays of Frozen Moments, and the freezer itself was surrounded by several bags of fertilizer, stamped with the logo of the Department of Nature. Last but not least, there was a long black cylinder wired to the entire contraption.

“What’s up with the tube?” shouted Briefer Shan above the din.

“It’s a different kind of casing than the one we used,” Chiappa observed. “But it looks like a Second Splitter to me.”

“I could be wrong, my friends,” Permin pointed to the smallest hand on the alarm clock, which sat stationary just above the number three. “But I think it’s set to go off in twenty-seven minutes.”

“Either way, we’d better get in there,” Chiappa announced, resisting the impulse to shoot Shan a look of annoyance. “And we’d better shut down these gears.”

As Permin instructed his managers to bring the ancient mechanism to a halt, Fixer and Briefer gathered their respective equipment.

“Lucien!” Administrator Neverlåethe was still shouting even though the gears had gone quiet. “I don’t think I can . . .”

“It’s okay, Permin,” Chiappa let him off the hook. “I didn’t expect you to come.”

“I know that. You’ve done all you can here.”