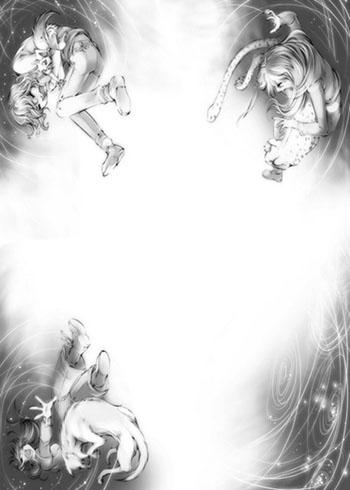 W
IND WHIPPED WAVES
of white, wrapping Adriane in cold. She covered her face, trying to see through the blizzard, thankful she had worn a down vest and heavy sweater.

“Storm?” she called out, suddenly afraid her friend had landed some place far from her.

“I am here,”
the wolf answered.

Adriane turned at the sound of the voice in her head. She instantly felt better.

She pulled her wool hat tight over her ears and trudged, head low, through the heavy snow. Within seconds, she found Storm. Dropping to her knees, she hugged the wolf close. “Thank goodness you’re okay. I can’t see a thing!”

“We have to get out of the storm.”

“Can you sense the others?” Adriane asked hopefully.

“What about the portal we fell through?”

“There’s nothing here now. We have to move. I sense danger.”

Adriane quickly turned, trying to see through the blinding storm. “Which way?”

“We must move towards the mountains.”

“Okay. Let’s go.” She got to her feet and pulled the cuff of her sweater up to expose the wolf stone on her right wrist. She concentrated. Instantly, the stone flared to life, casting a golden glow against the haze of ice and snow. The pair moved as fast as they could through the wall of white.

“Are we on Aldenmor?” Adriane tried to ignore the sharp cold hammering down.

“Okay, well at least we’re here… wherever that is.”

“Somewhere in the northern coastal regions.”

“I can smell brine of the ocean mixed in the wind. The storm is passing over.”

Her mistwolf senses were sharp. Sure enough, it wasn’t long before the blizzard began to trail away. The fog separated, and the vista in front of them was breathtaking. Towering glacier-covered mountains rose from the rolling tundra, bordered by huge brown cliffs.

Suddenly, the sky rippled with reds and purples. Blues and greens appeared. The entire sky seemed full of color and motion. Then, after several seconds, everything faded to a warm orange glow.

“What was that?” Adriane asked.

Sounds of crashing surf seeped through the wind. Gulls skimmed the dunes that ran not fifty yards from where they stood.

Adriane turned in a slow circle hoping to catch a glimpse of Emily, Kara, Lyra, or Ozzie. She scanned the wide plateau they had crossed, but all she saw was stark white landscape battered by cold winds.

Storm growled.“
Something is hunting.”

Adriane bit her lower lip. She’d been hunted once before on Aldenmor. Creatures had used her magic jewel to track her. Quickly, she covered the bracelet with her sleeve.

“Can you reach the mistwolves?” she asked Storm.

The mistwolf looked out beyond the giant ice mountains and closed her eyes. Adriane strained to hear a response from the wolf pack, but only the wind echoed in her ears.

Adriane spun toward the dunes.

Storm’s ears pricked up. “
The hunters have found prey.”

The call came again, this time more frantic. And then another sound. The unmistakable cry of an animal in pain.

Adriane and Storm took off toward the cry. The icy terrain was slippery, but they were swift and sure. They moved quickly, carefully picking their way up the shell-strewn dunes. Adriane crouched and eased herself toward the crest—and looked over.

She caught a quick glimpse of rocky beach and ice-covered water before the thing was on her.

A wave of fur and teeth swept over the dune, roaring like a hurricane. Startled, Adriane fell back, tripping over loose shale. It was the fall that saved her as a razor-clawed paw swept the air where she had been a second before. Big as a bear with piercing black eyes, the snow creature stood on massive hind legs, its matted white fur thick with congealed mud and dirt. Adriane rolled into a fighting stance. Suddenly, the creature vanished, hammered by a roaring rush of silver-furred fury.

Adriane jumped over the ridge and skidded to the bottom. The snow creature rolled across the stone-covered beach, struggling to remove the mistwolf from its back.

Three other snow monsters turned at once, looking up from the shallow waters of the wide bay. They were using their sharp, long claws to drag a large sea creature out of the waves and onto the frozen shore. Hazy sun reflected off emerald scales as the huge animal thrashed in the shallow water. It was the size of a whale but much sleeker, with tremendous flippers that it used to slap its attackers. Gills along its sinewy neck opened and closed, fanning desperately for air. A long slash just below its dorsal leaked red into the crystal-blue waters.

Confident their prey was sufficiently wounded, the snow monsters abandoned the scaled sea beast and moved toward the dunes.

Adriane chanced a quick look up the beach and saw the first attacker lying motionless. Storm has nowhere to be seen. With a roar, the monsters raced toward Adriane.

“I think I got their attention,” she whispered, sweeping her right arm into the air. Her damp sweater fell away, exposing the wolf stone wild with bright amber light.

The creatures slowed at the sight, then fanned out to box in the intruder.

She eyed the bear creatures and settled on the one in the middle, a huge mass of fur and teeth. She’d take him out first.

Magic fire flew from her jewel and whipped out in a golden ring. Instantly, the ring circled the giant bear. It leaped back in fright, trying to rip away the fire. The others skidded to a stop, unsure how to deal with this new situation.

Adriane stepped forward, whipping concentric rings of fire into the air, trying her best to make a fearsome display. Before the creatures could decide what to do, a terrifying growl erupted behind them—a silver mistwolf. Lips pulled back to reveal fierce razor teeth, ears flat, Storm was ready to spring.

The monsters decided to abandon their prey for the moment, slinking down the beach, then moving behind the dunes.

Adriane turned to the sea creature they’d attacked. During the fight, it must have managed to work itself into the surf. With a final painful cry and what looked like a wave of its flipper, it dove beneath the waves.

Adriane and Storm stood together on the windswept shore. Before them was a vast ocean strewn with ice. It stretched as far as the eye could see. Waves tipped with froth churned against the large ice floes.

“We surprised them, but they’ll be back,”
Storm said, catching the worry in Adriane’s dark eyes.

“We have to get to Mount Hope.”
The mistwolf pointed her nose south.
“It’s a long trek.”

Suddenly, geysers of water erupted offshore. With gruff snorts, four sea creatures broke the surface. Giant green dragon-like heads with large slitted golden eyes stared at the girl and wolf. But Adriane’s gaze was drawn to what sat upon their backs. Green-skinned with long flowing kelp-like hair, they stared at Adriane and Storm.

“You there!” A young man called from the back of his sea dragon. He looked to be sixteen or seventeen, but it was hard to tell.

“Who are you? What are you doing here?” Adriane asked, astonished.

“H
ERE, TRY THIS
.” Ozzie emerged from the thick bushes and handed Emily a pawfull of red berries. “Bubbleberries. Should settle your tummy.”

“How do you know they’re safe to eat?” Emily looked at the small berries in her hands uncertainly.

“
SpooF!”
Ozzie spit out a slew of berries. “Quick! Is my tongue green?” He stuck out a red tongue.

“Good. Then they’re okay.” He went back to stuffing his mouth. “I used to pick these all the time when I was younger. They grow all over the Moorgroves.”

Broken sunlight dappled through boughs of tall treetops. Emily and Ozzie walked along a wide road they’d discovered soon after arriving in the Moorgroves, a dense forest region covering an immense area of Aldenmor. Even though the sun shone overhead, they could see twin moons, Della and Orpheus, rising just above the horizon.

“If we stay on the road, we’ll end up somewhere,” Ozzie said, munching away. “Arahoo Wells, Dumble Downs, Billicontwee. I was going to visit my cousins, Crusp and Tonin, in Dumble Downs that night I ran into the Fairimentals.”

“Is the Fairy Glen somewhere in the Moorgroves?” Emily asked.

“Could be. There’s a portal near Dream Lake, I remember that.”

No one had heard from the Fairimentals for weeks until that Firemental had come for the girls.

“As long as we don’t wander into the Misty Marshes, we should be okay,” Ozzie said, looking up worriedly at Emily. “How are you feeling?”

“Better,” Emily answered bravely, rubbing at her wrist. As soon as they had arrived in the thick forests, she knew something wasn’t right. Dancing shadows moved across the road, making her feel dizzy and feverish. Her clothes clung, heavy with sweat, her mind seemed thick and foggy. And her stomach churned, threatening to empty her breakfast on the trail.

Trying to keep focused, she asked, “So you really grew up near here?”

“The Moorgroves border elf country. My village of Farthingdale is on the eastern Grassy Plains in the most beautiful rolling hills full of wildflowers. Wait till you see!”

“But we haven’t seen anyone since we started on this road,” Emily said, observing patches of open hills through the forest.

Shadows skimmed the ground, fading into the woods.

Emily had stopped, rubbing at her wrist.

Emily pulled up the sleeve of her cardigan. Deep red and purple light burst from the rainbow jewel, erratically pulsing like a dull heartbeat.

Ozzie’s eyes widened. “That doesn’t look right at all.”

But the jewel only pulsed darker, deep purples swirling to green and black.

Emily felt the darkness infecting her jewel. She tried to focus. Think. When had she felt these strange, sickening feelings before? Suddenly she remembered—

Ozzie’s scream broke her concentration. She saw the ferret yanking at her jeans, trying to pull her from the open road.

A dark shadow passed overhead. Emily raised her jewel to cover her eyes as she looked up. Something huge blotted the brightness. Glistening black wings swept behind a sleek head. It looked like a giant bat with a short hooked beak and red flashing eyes. On its back, a gruesome figure rode, apelike and covered in rough armor of leather and steel. It held a crooked staff of polished metal tipped with a red crystal. A wedge of sharp teeth formed a grin as it bore down on the travelers.