Emily saw the ferret hopping up and down, gesturing wildly.

She willed her legs to move off the road and into the cool darkness of shadows. Dust and dirt flew in her face from the sharp beating of wings.

The dark rider skimmed above Emily’s head, almost knocking her to the ground. The crystal on its staff flared like a demon sun. Ground, grass, and rock exploded, sending Emily flying past a tree. Coughing and choking, she propped herself on her elbows, trying to find Ozzie.

“Over here!” the ferret whispered as loudly as he could.

Emily scrambled over a grassy mound and fell behind a narrow knoll thick with moss.

“What are they, Ozzie?” Emily was breathing hard, pulling twigs from her curly red hair as she hunkered half buried in ferns.

“Goblin riders. This is bad. What are they doing in the Moorgroves—
oh, no
!”

Emily capped her hand over the ferret’s mouth. “Shhhh!”

“
Garg—
don’t you understand?” the ferret asked, pushing her hand away. “The Fairimentals have protected this part of Aldenmor for years. Now that they’re gone everyone here is in danger!”

“Where should we go?”

“We can’t stay here. We have to find the elves!”

Emily’s jewel had cooled to a dim glow but still swirled with maroon and black.

She closed her eyes, willing herself to cleanse the jewel. To feel something pure and good—but all she felt was the familiar sickening poison, seeping with darkness.

“Ozzie, I feel something.”

“Not far. Over that way.” Emily pointed toward a thicket of golden trees.

Ozzie was on his feet, pulling at her arm. “Can you make it?”

They scampered through the undergrowth, carefully picking their way over fallen logs, rocks, and brush.

With an eye to the skies for goblin riders, they quickly made their way through the trees. In the distance they could see valleys of green sloping beyond the forest.

“How close are we to your home?” Emily asked worriedly.

“That’s the Grassy Plains. Not far.”

They didn’t have to say what they really feared. If Black Fire had spread beyond the Shadowlands, Aldenmor was in terrible danger.

Distracted by her thoughts, Emily didn’t see the edge where most of the forest floor had eroded.

“Look out!” Ozzie shouted as Emily set her foot down.

She tried to grab onto a sapling—but her foot slipped. Chunks of wet dirt fell away as her body hit the ground. She rolled and tumbled down the incline before coming to stop at the bottom of a gully. Arms out, splayed flat, Emily steadied herself and gingerly pushed to her knees.

She sensed them before she saw them. About a dozen small creatures surrounded her, each standing about four feet tall, wearing boots of tanned leather, woolen pants, shirts, and leather vests. Each carried a long, sharp spear, pointed directly at her. She looked to see their faces and gasped. Their heads were contorted and gruesome, snarling, and heavily adorned with war paint.

“Where do you think we are, Lyra?” she asked the large cat by her side.

There’s magic in the air

All our friends are gathered round

To celebrate the fair

An expanse of forest wild with oak and ivy became visible as the pinks and yellows thinned. Excited voices became clear, cheering, whooping, and giggling.

“Sounds like someone’s having a party!” Kara said, looking at multicolored lights flashing in the distance.

Come and join the fun

Dancing under the sun

To all our fans

“Can you feel it, feel the magic.” Kara was humming along to the catchy song, skipping light as air as she danced through the mist and into the full-blown fairy rave!

Can you feel it

Everyone can’t help but sing along

The music pounded, loud and strong, sending an infectious melody soaring over the enchanted gardens.

“Whoa!” Kara raised her arms, swaying to the beat.

Even the magic glade at Ravenswood couldn’t hold a candle to this place—wherever she was. Explosions of color seemed to burst from everywhere. Fragrant, buttery yellow flowers, each painted with bright red stars, bobbed to the beat above the dance floor. Blossoms of sweet jasmine and peach filled the air with their luscious scents. Violet primrose and garlands of silver birch hung glittering over rings of floating toadstools.

The music blasted from a stage set upon a circle of tumbled stones at the far end of the magic garden where three performers played.

Rainbow sparkles cascaded gently, making everyone twinkle and glitter. And the place was jammed, teeming with all kinds of magical creatures Kara had never seen before.

“Fairy rave,”
Lyra said with disgust.
“Don’t get too close, the magic is intoxicating, they’ll lure you—Kara?”
Lyra looked around for her missing friend.

Kara danced by shimmying big-footed kobolds. She shook and hopped past cute little brownies and hooting hobgoblins. She bopped and boogied with five raucous long-bearded gnomes. Somewhere in the back of her mind a nagging thought told her she didn’t have time for this. She should be looking for someone, Kara thought. Some friends. They were supposed to be doing something important, only she couldn’t remember exactly what it was. And at the moment, it didn’t seem all that urgent. All she wanted to do was rock out.

“Kara!”
Lyra called, slinking through the silky, hypnotic rhythm of the music, paws firmly on the ground.

Kara was in the center of the party with all kinds of creatures dancing around her.

Pint-sized purple pixies perched on purled fronds. Fat big-eyed boggles tossed toadstools and drank from thimble-sized cups. Spriggles and sproggins huddled under tables gobbling strange-looking foods. Leprechauns wandered around knocking into one another belly first and laughing hysterically. And darting over all of them, perching on blooms and dancing in circles were vibrant, luminous beings, beautiful gossamer-winged fairies!

Can you feel it

Then she saw three performers on stage. They were totally kickin’ it. The band was human-sized, like her. The lead singer’s long raven hair flowed as she moved and twirled, scarves billowing around her like silky clouds.

With hair of neon pink and flaming red, the drummer leaped and jumped, pounding out the rhythm on anything she could find—including the heads of two overzealous trolls.

Golden-skinned with dark blue hair, the guitar player strummed a strange-looking instrument of burnished wood that flared and glowed under her amazingly talented fingers.

“Woohoo! They totally rock!” Kara yelled, waving her arms, moving to the beat. The music was glorious, filling the garden with the most incredible magic. It was as if nothing else mattered, nothing else felt this good.

Kara danced with a pointy-toed, top-hatted, purple spriggle. The fairy creature raised his feet and arms, dancing up a storm.

“Okaaaay.” Kara danced away into a cloud of sparkling wings.

“Ya poof git!” the angry spriggle yelled, waving his small fist at her.

Beautiful silver-and-blue winged fairies converged about her, lifting her hair, tickling her arms and legs. A few beady-eyed hobgoblins dropped into the fray to inspect Kara’s backpack. Snickering and hooting, they opened the zipper, diving in and rifling through the treasures.

One pulled out a granola bar. “Ah harg!”

“Gimme, ya booty bogger!” another cried.

They struggled over the treat, falling to the ground as another pulled out an orange sock, which he promptly put over his head.

There was a loud commotion behind her.

The fairy map—it floated out of the backpack! Sparkling stars winked and blinked inside the orb. A dozen spriggles had piled up on top of one another, trying to grab it, but the orb floated out of their reach. It rose into the air and hovered above the excited crowd.

“Hey, that’s mine!” Kara said, easily grabbing the blue orb back into her arms.

The music came to an abrupt halt.

Everyone stopped dancing, frozen, staring at Kara with wide eyes and dropped jaws.

“The magic is with you.”

She spun around to face the stage. The band was staring at Kara.

The flaming-haired drummer leaped from the stage, landing gracefully at Kara’s feet in a deep bow. “We’ve awaited your return, Princess.”

The entire crowd fell to the ground, bowing profusely and groveling at Kara’s feet.

“What gives? Who are you?” Kara asked the pointy-eared fairy musicians.

“We are spellsingers,” the siren singer said.

The drummer jumped to her feet, tapping a fast rhythm with her boots. “Maybe you’ve heard of us. We’re B*Tween.” 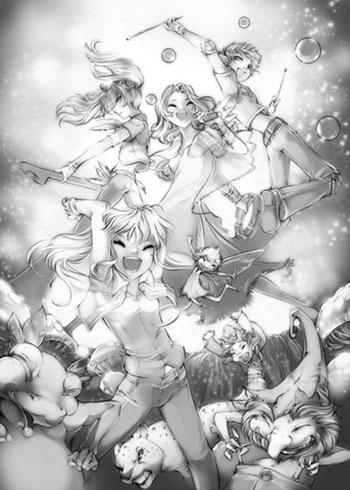 I
CY BLUE WATERS
rolled past the sleek sea dragon as it sped along the surface, leaving frothy waves in its trail. Powerful fins and a long tail skimming like a rudder kept the riders on its back steady and sure. Adriane and Storm sat in front of the sleek dorsal fin. They watched the green-skinned boy from the sea talk to his mount as he gently stroked tapered fins behind the beast’s scaled head. It made Adriane think of Zach and the way he had been with Windy, his brave griffin friend.

The merboy’s clothes were sea-green and blue, like a diver’s wetsuit. Around his neck hung an opalescent star-shaped jewel. His long, green hair was pulled back and tied with several cords strung with shells. Pointy ears peeked from his kelp-like hair.

“How did you know we would be here?” Adriane asked the boy, whose name was Jaaran.

“We were told you would come,” Jaaran explained.

Adriane noticed the boy’s eyes had two sets of lids. She guessed one was for protection underwater. He had webbing between his fingers, and his bare feet formed natural fins of webbed toes.

“Told by whom?” Adriane asked.

Caught Running by Madeleine Urban, Abigail Roux
Watchfires by Louis Auchincloss
Don't Kill the Messenger by Eileen Rendahl
The Unbinding by Walter Kirn
Hold Your Peace (Short Story) by Bailey, H.M.
Preservation by Wade, Rachael
Bred By The Vampire by Rose, Emma
The Cowboys and the English Teacher [Hot Off The Ranch] (Siren Publishing Ménage Amour) by Luxie Ryder
Linda Ford by Once Upon a Thanksgiving
The Trojan Princess by JJ Hilton
Our partner