“I did not. You always used a smaller ball—hey!” His eyes widened.

“Oh!” Emily stood but nearly keeled over in pain.

Ozzie was at her side in an instant. “Can you make it?”

Emily’s face was covered in sweat. Clearly, she had a fever.

“Hey!” Ozzie called to the elves. “We need some help here!”

The elves gathered around Emily, supporting her. Ozzie had never seen her so weak. “Ready?” he asked, keeping the worry from his voice.

“She is very sick for a mage,” Tonin commented. “How is she supposed—”

“She’ll be okay, just get us there fast,” Ozzie said.

The elves whisked through the thick forest, keeping the drooping girl upright and moving. At the edge of a clearing, they spotted farmland with acres of vegetables and corn-like husks growing in neat rows. A wood and stone farmhouse lay nestled in a rolling hill beyond.

As they crossed, Ozzie saw why the farmland was in isolation. Deep grooves cut through the tall corn, ragged and ugly. Within the grooves, familiar sickly green glowed and pulsed. Black Fire.

Ozzie was heartsick. How could this have happened here?

“The Fairimentals have vanished. We are no longer protected,” Tonin said, as if reading his mind.

“Ozzie.” Emily pointed. Dozens of animals lay in the grass near the side of the house, covered in green glowing wounds.

The group hurried across the field. Opening the wooden front door, Emily found two elves lying listlessly on beds of reed mattresses. Their breathing was shallow, and their skin glowed sickly green.

Emily immediately checked each one. A little elf girl lay in her crib. Emily would have to act quickly. “The little one first,” she said.

“Stand back! Give her some room!” Ozzie pushed the worried elves back.

Emily tucked her curly hair behind her ears, then raised her wrist. The jewel pulsed erratically, shifting from deep red, to blacks and sparking blues. There was no time to think, no time to worry, only to act.

“Shhh, it’s okay, little one,” she whispered, stroking the baby elf’s long hair. Big eyes looked up at her. “What’s your name?”

“Don’t be afraid, Vela. Just hold onto my hand.”

The healer closed her eyes—and fell into darkness. Swirling blackness thick as night blanketed her. She fought to stay conscious. The Black Fire had never felt this strong before. It was like a vise locking her in its grip. Here on Aldenmor its power was so much stronger. Overwhelming.

Ozzie ran to her, leaped, and threw his arms around Emily’s neck, as if to hold her in place, to keep her from falling. “Hang on,” he whispered. “I’m right here.”

The healer’s jewel pulsed with a surge of rainbow light, slowly at first and then more quickly.

“You can do it.” Ozzie hugged her close.

“The ferret is a healer, too?” an elf asked.

“Yes, he helps me.” Emily focused harder. She reached for the dark power as it warped and twisted, a live snake in her grasp. But it was too strong, threatening to blot out her jewel, and with it, any hope of healing the elves.

Enveloped by darkness, Emily struggled to find her light. If she faltered now, she would be lost.

Then she felt pressure in her hand. The little elf had closed her eyes and was squeezing Emily’s hand as hard as she could. Ozzie’s soft whiskers tickled her neck as the ferret hugged her tighter.

Something sparkled in her mind, blooming into a crystalline shape—a flower. A rainbow puff flower! In a sun-drenched field, hundreds of puff flowers glittered, waiting to release their magic.

And in the center of the field sat a huge, purple, bearlike creature. The fairy creature opened his wide round eyes and smiled.

“Phel!” Emily gasped. She grabbed for his magic, a lifeline to pull her from the shadows.

Reaching out great paws, Phel sent seeds of magic spiraling into the air, a thousand lights to show her the way—

The rainbow jewel exploded with light, bathing the entire room in the pure blue of healing.

Emily sent the power cascading over Vela until she felt the little elf’s heartbeat sure and strong. Emily pushed harder. She could feel the fever leaving Vela’s body, her sight becoming sharp and clear.

The light faded along with her vision of Phelonius, but Emily no longer felt drained. She was strong, whole again.

She opened her eyes to see Vela sitting up and smiling. The sickly green had vanished.

Ozzie leaped in front of Vela. “How do you feel?”

“Ooo, a mookrat!” she squealed, squashing the ferret into a big hug. “Can I keep it?”

A cheer went up from the elves as they surrounded Emily.

“Okay, everyone.” Emily smiled, then gently pushed the elves aside. “Bring the animals to the front of the house, one by one. I’ll get to them as soon as I take care of Vela’s parents.”

The elves made a mad rush to the door, trying to squish through all at once.

“She is a great mage,” they rumbled.

“I told you!” Ozzie called out.

“What did you do to Ozzie?” the elves chorused in return.

Emily attacked the Black Fire with a vengeance, strengthened by the joy that Phel was alive somewhere on Aldenmor.

Like an angel, Phel had come to her and helped her discover something vital: in healing others, she could heal herself. Emily finally understood. What she feared most—all the pain and the suffering—could be washed away with the beauty of the light within her. Her true path lay in helping—and that was the only true path for a healer.

Finally, all of the sick had been made well.

“We are so grateful,” Tonin told Emily when she’d finished her work. “We would be honored if you’d share supper with us.”

“We can’t stay. We have to join our friends at Mount Hope,” Emily explained.

“We’ll take it to go,” Ozzie called out, still in the grasp of little Vela’s strong hug.

“My jewel,” Emily said, watching soft rainbow swirls in the gem. “It’s attracted them. We have to leave. Can you lead us to Mount Hope?”

“We can take you to the portal at Dream Lake. If it still works, you should arrive nearby.” Crusp turned to the elves. “Tonin and I will take them. You lead the others past the Far Falls to distract the riders.”

“Right!” The elf ran out to tell the others.

“Ozymandius, you have changed,” Crusp said, facing the ferret.

“No, I don’t mean physically. I mean you have changed. You’re… a hero.”

“Coming from you Crusp, that’s fine praise. Tell her to put some more grain cakes in there, will you, Cousin?”

“Hush now, darling,” her mother said. She handed Emily a bag of goodies. “Come back to us, healer.”

“I’ll be back, too.” Ozzie gave Vela a kiss. “And next time without fleas!” 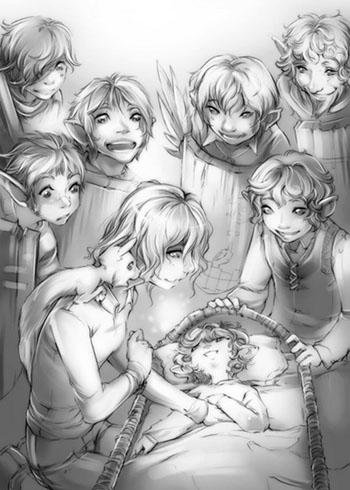 “W
ELCOME TO THE
fairy rave.”

Kara was awestruck. She couldn’t think of a single thing to say! “You’re B*Tween!” she finally blurted. This band was topping the charts on Earth. What were they doing here?

The lead singer stepped forward. Flowing silk scarves swirled around her. She had sparkling azure eyes and cute pointy ears. Dazzling jewels hung from chains around her arms and neck. “I am Sylina, a siren.” Her voice was light as air, soft as a cloud.

“I’m Crimson.” The red-and-pink haired percussionist twirled, lightly tapping a rhythm on tiny bells that surrounded her like twinkling bubbles. “I’m from the pixie nation.” She wore a bright red jumpsuit and had bracelets around her ankles and arms. “And I believe this belongs to you,” she said, finishing the beat on the fairy map before handing it back to Kara.

With a spin and bow, the blue-haired guitarist introduced herself. “I be Andiluna. A sprightly sprite to me friends. Call me Andi.” She swung her arm, striking a thunderous chord from her glowing instrument.

“And you are Kara, the blazing star,” the raven-haired siren singer said.

“We love your music!” was all Kara, completely baffled, could think to say.

Lyra stood by Kara’s side, tail twitching with suspicion.

“There is no reason to fear us, great protector.” Sylina smiled at the big cat. “Kara is perfectly safe here.”

Crimson’s laugh tinkled in the air. “Only some fairies are tricksters, Lyra.”

A few nosy hobgoblins landed on Lyra’s head, hanging over the cat’s face.
“Shooo!”
Lyra shook the pesky creatures away.

Kara had a million questions for B*Tween. “What are you doing here? Aren’t you on tour? What is this place? And how come you’re all fairied out?”

Crimson hopped onto a toadstool. “Slow down. First of all, we
are
fairies.”

“Fairies and fairy creatures come in many sizes,” Andi chuckled.

“But you’re all over the radio,” Kara noted.

“Number one on the charts!” Crimson whooped.

Kara shook her head. “Okay. Go back to where we are.”

“As the web grows weaker, hidden pockets of magic like this one are created.”

“A twilight realm between worlds,” Andi concluded. “Ya follow?”

“Okaaay.” Kara crossed her arms. “What about your email? How do you know about our quest?”

Crimson twirled around Kara. “Word has spread far and wide about the three mages. You are quite famous throughout the Fairy Realms.”

“Fairies spread magic through nature,” Sylina explained. “But it’s too dangerous for the fairies of Aldenmor.”

“We travel through the realms, calling fairies with our music, helping them restore magic until the web is healed.” Crimson beat out a rhythm on a few troll heads.

“Only the purest of magic can make that happen,” Sylina said.

“But what’s in Avalon?” Kara asked.

“No one knows, not even the Fairimentals.” Andi swung her guitar over her shoulder. “It’s been the subject of debate for years in the Fairy Realms.”

“One thing is for sure.” Crimson spun to a stop in front of Kara. “It’s up to you to find out.”

The throng of fairy creatures were all staring at Kara. “I’m not exactly a spriggle.”

“Come, walk with us.” Sylina led Kara and Lyra away from the curious creatures. “You are here for answers, blazing star.”

“Everyone, back to the party!” Crimson jumped, sending a row of toadstools spinning around the garden. The crowd began dancing wildly around the thumping drums.

“It is very rude to ask a fairy his or her name,” Sylina explained.

“Fairy names are secret. They are only given as a powerful gift,” Crimson continued.

“Ya name a fairy, ya capture its magic,” Andi said.

“I’m not up on my fairy etiquette,” Kara said. “Sorry, little purple dude.”

The spriggle smiled and threw himself onto a crowd of dancing boggles.

“Many years ago, humans and magical creatures worked together,” Sylina told Kara. “When the portals between worlds closed, some of the magic remained on Earth. Many animals of Earth descended from magical ancestors.”

“Yeah,” Kara mused. “There was this dog that saved his whole family from a fire.”

Young Winstone by Ray Winstone
Night of the Loving Dead by DANIELS, CASEY
Ace, King, Knave by Maria McCann
No Dark Place by Joan Wolf
Clarence E. Mulford_Hopalong Cassidy 04 by Bar-20 Days
The Virgin Suicides by Jeffrey Eugenides
A Horse Called Hero by Sam Angus
Rednecks Who Shoot Zombies on the Next Geraldo by Paoletti, Marc, Lacher, Chris
The Last Battle by Stephen Harding
Love Is Elected by Alyssa Howard
Our partner