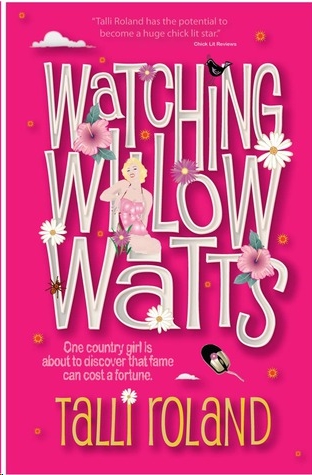 To A, once again and always.

All rights reserved in all media. No part of this book may be reproduced or transmitted in any form by any means, electronic or mechanical (including but not limited to: the Internet, photocopying, recording or by any information storage and retrieval system), without prior permission in writing from the author and/or publisher. This expressly includes sharing any part of the work online on any site whatsoever, unless the temporary sharing provided under licence by and via Amazon Kindle.

has been asserted by her in accordance with the Copyright, Designs and Patents Act 1988.

All characters and events featured in this book are entirely fictional and any resemblance to any person, organisation, place or thing living or dead, or event or place, is purely coincidental and completely unintentional.

‘
PLEASE, NOT THE KUMQUAT
marmalade again,’ Willow Watts whispered as an elderly lady beckoned with a spoonful of jelly. Last year’s sample of the culinary horror had put her off kumquats for life – this one might kill her. Desperate to escape, Willow edged away from the row of booths dotting the green for Belcherton’s annual summer fair. If she could just get across to the other side . . .

‘
Dear, over here! You must try this year’s batch. It’s come out wonderfully.’

There wasn’t any choice now, was there?
Pasting on a bright smile, Willow breathed an apology to her belly and reluctantly approached the table. Even though the fair was well underway, Mrs Greene was still fully stocked – hardly surprising given the jam tasted like feet. Willow inserted the small spoon into her mouth and swallowed.

‘
Um-um,’
she faked, rubbing her stomach. ‘You make the best kumquat marmalade in all of Belcherton.’ It wasn’t a lie; no-one else in the village had anything to do with kumquats, thank God.

Mrs Greene’s wrinkled face creased into a grin. ‘I knew you’d like it. Oh, before I forget, the Better Belcherton committee is meeting up at the church tomorrow morning at eight. You’re to bring biscuits, remember. Now, do you fancy another sample?’

‘
Er
, I’d better get going.’ Willow hastily backed away from the glistening jelly. Better Belcherton tomorrow, she repeated in her head. She’d forgotten a meeting last year and in retaliation, Mrs Greene had stuck her on biscuit duty for what seemed like forever.

‘
Wills
!’ Paula waved from her celebrity dress-up booth across the green. Wonky handwriting on a cardboard placard spelled out
Pay a Pound. Be a Star!
Off to the side of a small table, a rail held garishly bright costumes. Squinting, Willow recognised Elvis’s spangled white jumpsuit and . . . what was that curly blue wig? Marge Simpson?

‘
Step right up! Ch
oose a costume, any costume.’ Paula twirled an imaginary moustache. ‘Then I’ll snap your photo for posterity.’

Willow shook her head – if anyone was photo-worthy, it was her best friend. Today, Paula’s thick mane of spiral-permed dark hair was caught up in a high side ponytail, and her wide blue eyes sparkled with green eye-shadow. Pinstripe denim hugged curvy legs, with an oversized neon top completing the look. And this wasn’t even a costume! ‘Rocker chic’, Paula liked to call her daily attire.

‘
Sorry,
I don’t have time.’ Willow glanced at her watch. Almost three, and she still had to mix up more orange squash, frost Mrs Lemmon’s extra cakes cooling in the kitchen, make sure Dad hadn’t forgotten his blood pressure medication . . .

‘
C
ome on, it’s for a good cause. What, you can’t even support your own village? And your best friend?’ Paula pulled her scarlet lips downward in an exaggerated frown.

‘
Oh, all right.’ Willow’s pound clanged against the other coins in the small basket on the table. ‘Which costume should I choose?’

Paula
propelled Willow over to the rail. ‘The Little Mermaid? Nah, boring. Elvis? Not sure that jumpsuit would fit you. Besides, Lordy’s just had it on.’ Willow grimaced, picturing the pub landlord’s belly straining at the fabric.

‘
Here we go.’ Paula grabbed
a musty-smelling white satin dress from the rack and thrust a platinum wig at Willow. ‘Marilyn Monroe.’

‘
Just give it a try
,’ Paula said, nudging Willow in the direction of a canvas tent.

‘
Fine, fine.’ Willow ducked
inside the small changing area. The faster she got into this get-up, the faster she could get out of it. Sighing, she tugged the wig over her thick chestnut hair and pushed its scratchy synthetic curls from her eyes.

‘
Right,
the hair’s on,’ she shouted, trying to ignore her itching scalp. ‘Just give me a sec to sort out the dress.’

Tilting
unsteadily, Willow drew the satin monstrosity over her daily uniform of T-shirt and jeans, nose wrinkling as the pungent combination of stale sweat and mothballs rose from the fabric. The once-white garment was now yellowed and stained, but thankfully it fit easily over Willow’s slender body so she didn’t have to come in contact with it. That was one advantage to having no curves.

‘
Ready! Watch
out, world, here I come.’ Stumbling from the tent, she struck a pose for Paula, whose mouth twitched as if she was holding back giggles. Fair enough; Willow could only imagine how ridiculous she looked. Tall, skinny women with what her father lovingly called ‘wholesome’ looks did not make convincing film stars.

‘
You’ve got the wig on backwards
, you clown!’ Paula clucked affectionately, neon wellies squishing as she negotiated a muddy patch toward Willow. She swivelled the hairpiece into place, then plucked at the satin until the dress fell in soft folds from Willow’s body.

‘
There.’ Paula spun Willow around to face a rusty old mirror. ‘What do you think?’

‘
Oh God.’ Willow let out a groan as she took in her reflection. The iconic white dress so sexy on Marilyn was more circus-tent than siren on Willow, and the glossy platinum wig made her rosy cheeks seem inflamed. ‘Next time you convince me to play celebrity dress-up, remind me to choose someone with
brown
hair.’

‘
Hello, ladies. Willow, don’t you look lovely.’ Simpson Dyer, Belcherton’s long-suffering – and only – member of the town’s tourism board came toward them, pointing a tiny digital camera at Willow. ‘Smile! I’m putting together a video to showcase our little piece of paradise to the world.’

Willow forced herself to beam
into the camera. God knows, Simpson and this village needed all the help it could get. No matter how many bad reviews Belcherton received from the media or Cotswolds tourists – everything from ‘it’s a dump’ to ‘don’t waste your time’ – Simpson always believed they were just one campaign away from achieving the legendary status of nearby Bournton-on-the-Water or Broadway.

‘
So here we are at the celebrity dress-up booth,’
Simpson intoned in a movie-trailer announcer’s voice as he zoomed in the camera. ‘The lovely Willow Watts, a foremost expert in all things antique and an invaluable village resident, has donned the garb of the legendary Marilyn.’ He motioned for her to spin around and Willow obeyed, nearly toppling over as she turned.

‘
Marilyn, can you sing us a little tune?’ Simpson was saying.

Willow laughed. ‘Simpson, aren’t you trying to attract visitors? The sound of my voice would only scare them away. Anyway, aren’t the morris dancers starting soon?’ She craned her neck toward the centre of the green, hoping she hadn’t missed her father’s performance. Last year he’d been too ill to take part but today, with his blood pressure now stabilised, he was raring to go.

‘
Oh, come on, Marilyn!’ Paula shouted from
a few feet away, where she was trying to persuade a pensioner into an Alice Cooper costume. ‘Happy Birthday, Mr President . . .’ she crooned, waggling her eyebrows. Even with the eighties get-up, Paula was way more convincing as Marilyn than Willow could ever hope to be.

B
ig fat raindrops were now falling from the sky, but Willow couldn’t help laughing and joining in. What the hell – it wasn’t like this video would ever see the light of day. Simpson’s grand schemes usually gathered dust. ‘Happy birthday’ – Willow did a little shimmy – ‘to you, happy birthday to you.’ Swaying her reed-like body back and forth, she took a few careful steps through the mud toward Simpson. ‘Happy birthday, Mr President . . .’ She curved her lips in a sexy grin. ‘Happy birthday to you!’

Willow’s face went
hot when she realised her crow-like voice was echoing alone.

‘
God!
Remind me not to ask you to do karaoke with me,’ Paula joked.

‘
I told you I couldn’t sing,
’ Willow protested. She didn’t even dare hum unless it was in the privacy of her own room, and even then she kept it low so her dad couldn’t hear.

‘
That’s all right,’ Simpson said soothingly. ‘I can play around with the sound.’ He polished the glassy eye of the camera, then turned toward the group of men filtering onto the green. ‘Oh, the morris men are starting. I’ll see you ladies later.’

‘
Can you
get me out of this?’ Willow asked Paula. ‘Dad will kill me if I miss his big comeback.’

‘
Hold on, I’m supposed to snap your photo as a celeb,’ Paula said, although she didn’t look too eager to stay out in the rain. Her ponytail was beginning to droop and the heavy black eyeliner had started melting down her face.

Wil
low waved a hand. ‘Don’t worry about it.’ No way did she want to remember this moment.

Paula squelched over and unzipped the back of the
sodden dress, helped Willow step out of it, then took the wig from Willow’s head. She made a face as she lifted a clump of Willow’s thick brown hair. ‘Why don’t you drop in for a cut tomorrow, babes? Reckon you’d look fab with a few pink extensions, too.’

‘
I’ve got a meeting up at the church and then I’m with Dad at the shop,’ Willow said quickly. Paula was always after her to change her hair, but Willow couldn’t see the point of making an effort. ‘Anyway, it’s not like I’m trying to impress people here. I could shave my head and they wouldn’t care.’

‘
That’s because they all have cataracts!’ Paula retorted. ‘And
just because you’re not trying to impress anyone doesn’t mean you have to walk around with split-ends, you know. Even nuns get haircuts!’

Willow laughed. She might as well be a nun
for all the action she got these days. God, she hadn’t even dated since . . . no, she wouldn’t think about that.

‘
Come on,
let’s go watch my dad,’ Willow said, taking Paula’s arm as they hurried toward the growing crowd in the middle of the green. ‘I just hope he doesn’t pull a hamstring this year.’

WILLOW
JAMMED A PILLOW over her head, trying to block out Krusty the rooster’s daily wake-up call. It wasn’t even a proper rooster noise: Krusty had lost his voice years ago, and all that escaped now was an ungodly croaking like a cross between a bullfrog and a fog horn. Only Mum’s devotion to the ancient rooster – who she’d rescued years ago from Mrs Lemmon’s stock pot – had kept Willow’s father from shooing off the bird for good.