Read What the Heart Knows Online

What the Heart Knows 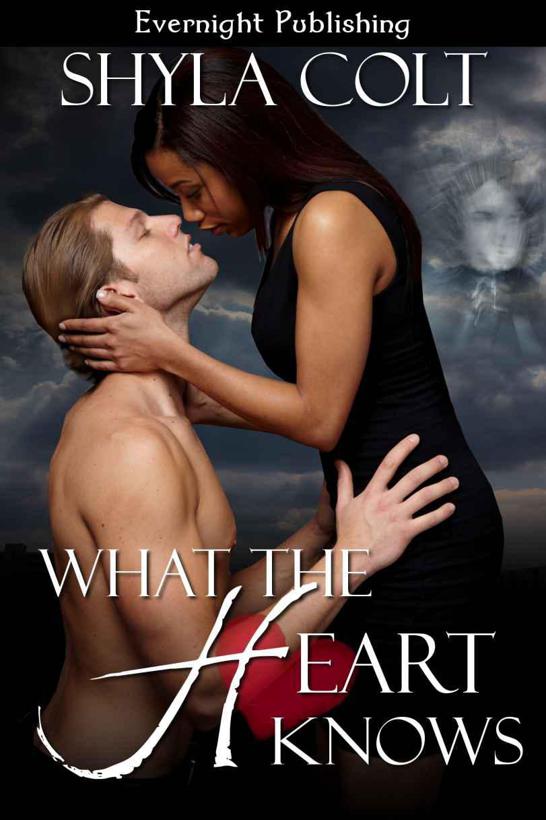 WARNING:
The unauthorized reproduction or distribution of this copyrighted work is illegal.  No part of this book may be used or reproduced electronically or
in print without written permission, except in the case of brief quotations embodied in reviews.

Thank you to the man upstairs who gives me the strength, patience, and creativity to juggle all the roles I’ve been assigned to and still manage to keep the words flowing on the paper. To my family and friends who constantly support me, I appreciate each and every thing you do. Especially my husband Rich who’s my real life hero, and my daughters who make strive to be a better person daily.

LLL- I love you ladies, your kind words, encouragement and support are amazing. Nichelle, you always cheer me on and offer up the best support, I’m proud to call you friend J, M and Jessie ,thank you for all the plotting sessions. Portia- thank you for the info and honest opinions. Readers, thank you for all the love you show me! Without you guys I’d be nothing.

WHAT THE HEART KNOWS

Oliver clenched the steering wheel of his car tight as he sat on the side of the dirt path. This was the closest he’d come to her grave since they lowered her casket into the ground two years prior. He called himself a million different names
:
coward, asshole, bastard, murder
er
. Yet, none gave him the final push needed to stand in front of the marble slab that marked Hannah’s final resting place.  It made him sick to his stomach to think of her six feet beneath the cold ground.  Her golden skin must be rotted away by now.  The flesh disintegrated to reveal yellowed bone until Hannah’s features were unrecognizable. He pried his hands from the wheel and ran them through his hair.

Despite the years, her presence continued to linger. He could smell the scent of lavender in their home and on the clothing items that had belonged to her. The shrink told him the memories would fade over time, and become less vivid. Yet, it was a rare occasion when he didn’t wake up and expect to roll over and see her beside him. It was like being trapped inside of a nightmare, only he was awake.

“Fuck!” He slammed his fist into the steering column.

How much longer could he go on like this? He’d given up on shrinks a year ago, sleeping pills were a last resort, and neither prayer nor meditation helped clear his mind. Oliver’s body shook as he peered out of the window to look over the grass littered with rounded stones and statues. He was just a hundred yards away, but it seemed like a million mile trek.  Fat droplets of rain began to splatter against the windshield before the gray sky unleashed a torrential downpour.  It was fitting that the heavens leaked the tears he no longer had the ability to make.  He let the white flag of surrender rise in his mind as he turned on the engine, put the car into drive and pulled away from the dirt road. Maybe he’d have better luck next year.

Once he exited the cemetery, Oliver navigated the slick roads as he drove aimlessly. Home was the last place he wanted to be. Hannah’s ghost haunted every nook and cranny of the three
-
bedroom ranch they’d purchased in their early twenties. A well-lit shop window caught his eye, and he pulled over into a parking spot nearby. The shop window read Cupa Tea in black cursive lettering, and he felt himself pulled to investigate. As a freelance photojournalist, mom and pop coffee shops like this one were practically a second home.  Once he parked he made a dash from his car to the black awning attached to the building.  He stepped inside and felt relie
ved
that it was empty. Solitude suited him right now.

Oliver shrugged out of his jacket. A perusal of the room revealed warm yellow walls, and dark wooden tables with high back chairs.  A glass counter displayed pastries, bagels, and cookies to the right of the register. However, it was the full head of chocolate curls that caught his eye. The sienna
-
skinned woman at the end of the counter glanced up from the notebook she’d been bent over and pierced him with the biggest pair of milk chocolate colored eyes he’d ever seen. Fringed with dark lashes, her enormous peepers seemed to peer inside of him.   Her full pink lips spread into a sheepish grin as she pushed up into a standing position, and placed the notebook out of sight behind the bar.

“Sorry, it’s been slow today with all the rain. You’re the first person to venture inside in over two hours.”

Oliver nodded, as he took a seat on a stool
near
her. The kindness that poured off her was almost tangible as she moved to stand in front of him with a large smile on her face.

“See, I wouldn’t have pegged you for the heart type anyway.”

He was curious to see what the woman would say next.

“I have knack for these things,” she said.

He found himself responding almost against his will as her energy pulled him away from the grief that had weighed on him heavily. A part of him latched on to the reprieve.

He arched an eyebrow as she turned to glance at him over her shoulder while she prepared his drink.

“I can see you’re a skeptic, but I think I can change your mind.”

She gave him a wink, coaxing a real smile for the first time in days. It was freeing to interact with someone who didn’t know a thing about him. Maybe for one night he could pretend he wasn’t hanging on by a thread. He smirked as she continued to block his view with her body. She had spunk. The whoosh of the shiny silver machine ended and she walked back toward him with a giant white mug.

“Hi Oliver, I’m Juniper, but everyone calls me Juni.”

“Our last name is Bloom, and my parents fancied themselves to be comedians.”

Oliver laughed when she wrinkled her button nose to show her displeasure. He glanced down at the latte design he could only refer to as art.  She’d made a series of small pictures that ranged from three inches to about half an inch. The largest was a planet with a large ring around it
,
which she surrounded
with
smaller stars and planets.

“Whoa. I didn’t know you could
make
such intricate outlines.”

“Well, this is my parents
’
place. So, to be fair I’ve had years to perfect my technique.”

She leaned her side against the counter and til
t
ed her head.

“Now you have to taste it. Pretty decorations are one thing, but it’s the taste that really counts.”

“I almost feel bad drinking this,” he said. His brow furrowed as he lifted the cup to his lips and took a sip. The creamy, rich flavor filled his mouth and he moaned his appreciation.

“My compliments to the Barista.”

She moved back to the latte maker and began a methodical wipe down with a white cloth.  Silence fell over the café and Oliver found himself shifting his weight as he drank his latte. He was never really one for small talk, but this girl had him wanting to learn more about her.  Dressed in a pair of well-worn denims that showcased her slender frame, and a plain white t-shirt that hugged round, high breasts, she had a girl next door appea
l
. He bounced his leg as he ra
c
ked his brain for something to say. Was he really this rusty at making conversation?  She looked up from the notebook she’d laid back on the counter to scribble in and smiled.

“Is this your first time at Cupa?
”

“Lucky guess
.
I’m here most of the time, and I’m pretty sure I’ve never seen you.”

“Maybe I’m just not that memorable.”

His lips twitched up into a smile as she ducked her head and glanced away. Her oval-shaped face disappeared behind a voluminous curtain of curls. Her coyness stirred a long dormant emotion inside him. Like a gust of wind that ignites kindling.

“Do you draw?” he asked. He nodded his head toward the black and white composition book laid out in front of her.

“I think you should. After all, I did for you with my Latte Art.”

“I
t
might make things a bit more exciting,” he said.

Her eyes lit up as she leaned towards him with her elbow on the counter.

“Well, what are the stakes
?
What do you want?”
she asked.

You
.
He cleared his throat, and moistened his dry lips with his tongue as he inhaled her scent. She smelled floral and light, just like her name.

A Cry from the Dark by Robert Barnard
The Agincourt Bride by Joanna Hickson
The Hollow Places by Dean Edwards
The Beast of Bracksley Woods by Doreen Hayward
About Face (Wolf Within) by Amy Lee Burgess
Bite Me by C. C. Wood
The Courbet Connection (Book 5) (Genevieve Lenard) by Estelle Ryan
El cielo sobre Darjeeling by Nicole C. Vosseler
The Port-Wine Stain by Norman Lock
The Confessions of Max Tivoli: A Novel by Greer, Andrew Sean
Our partner