What's Done In the Dark 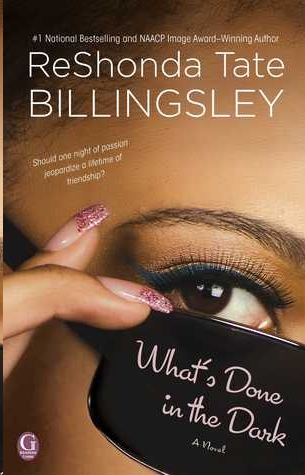 Her bestselling novels of family and faith have been hailed as:

“Poignant and captivating, humorous and heart-wrenching.”

The Secret She Kept

“Entertaining and riveting. . . . A heartfelt and realistic look at the damaging effects of mental illness on those who suffer from it and the ones who bear the burden along with them. . . . Jaw-dropping, a drama-filled story. . . . Definitely a must-read.”

Winner of the NAACP Image Award for Outstanding Literary Work

“Billingsley infuses her text with just the right dose of humor to balance the novel’s serious events.”

“Her community of very human saints will win readers over with their humor and verve.”

A Good Man Is Hard to Find

“Sensational. . . . [Billingsley] makes you fall in love with these characters.”

The Devil Is a Lie

Can I Get a Witness?

“Billingsley serves up a humdinger of a plot.”

I Know I’ve Been Changed

“An excellent novel with a moral lesson to boot.”

“ANY MAN THAT CAN RESIST
this must not be a man!” I giggled as I wiggled my toned behind in the full-length mirror in my bedroom. I made sure my snow white lace thong was situated just right, then brushed down the candy-apple-red negligee. I’d never in my life spent two hundred dollars on lingerie, but I wanted tonight to be special. I
needed
tonight to be special.

My commitment to Shaun T’s Rockin’ Body workout DVD had paid off. Everything was tight in all the right places, and my body looked like it belonged to someone who was twenty-five—not the thirty-five-year-old mother that I am.

I fluffed my curls and gave one last smile to my reflection. Today was my fifteenth anniversary, and I was determined that a sex life that died fourteen years ago would be resurrected tonight.

I had taken all of my sister, Fran’s advice. Even though she was single, she never had a shortage of men.
She swore it was her ability to give good loving that kept her Rolodex on fire.

I pressed play on my iPod to start setting the mood with all of our favorite songs. I dimmed the lights as the sounds of Luther filled the room. I had left a trail of rose petals—from the garage, through the kitchen, up the stairs, into our bedroom, then finally all over the bed. I wanted Greg to experience the alluring ambience the moment he walked through the door.

I checked, then triple-checked that everything—the wine, the rose petals, the scented sheets—was just right. But my smile faded when I noticed the time. It was eight thirty. Two hours past the time my husband had said that he’d be home. I immediately felt myself getting frustrated. I had moved heaven and earth to get someone to cover my shift at the hospital so I’d be home in time. I had hoped my husband could do the same.

I took a deep breath. I was not going to stress about tonight. Greg was a borderline obsessive-compulsive workaholic who was dedicated to his job as a successful investment banker. For our anniversary, though, I hoped he would try his best to relax and just enjoy himself. And tonight I was going to help him make that happen. He would relax, and we would rekindle the spark that had long ago been extinguished.

I threw on my silk robe and busied myself with my iPhone messages until I finally heard the door chime, signaling Greg was home. I glanced at the digital clock on the nightstand: 8:52.

Okay, Greg was late but not that late, I told myself. We could still salvage this night. I removed my robe and eased
into a sexy position on the bed. I plastered on a seductive smile and waited for the door to open.

A few minutes later, I glanced over at the clock again.

“Okay, what is taking him so long to get upstairs?” I mumbled.

When the clock hit 9:18, I had had enough. I got up, grabbed my robe, and made my way downstairs. That had to have been Greg coming in because our daughter, Liz, was spending the night with a friend.

I peeked out the small bay window near the staircase. Greg’s car was parked in the driveway, so he was home. What in the world was he doing? Surely he had seen the trail of rose petals.

I had just reached the middle of the stairs when I heard the vacuum cleaner. Not understanding, I descended a few more steps. Then my mouth fell open when I saw my husband vigorously vacuuming up the rose petals I had so meticulously laid out.

“What are you doing?” I screamed over the vacuum.

He glanced up. “Hey, babe, getting all this stuff up off the floor. Liz must’ve made a mess or something.”

I stared at my husband in disbelief. “Are you serious?”

He didn’t reply as he took the hose off the vacuum and began sucking up the petals off the stairs.

“Liz didn’t do that! I did!” I yelled over the vacuum.

He didn’t stop cleaning. “You did this? What did you spill?”

I picked up a few petals at my feet, then threw them at him. Of course, they didn’t do anything but flutter back to the ground. “I didn’t spill anything. I laid them out!
It was a trail of rose petals.”

He looked at me like that was the dumbest thing I’d ever done.

“Well, you know I like to come home to a clean house.” He finally cut the vacuum off and started picking up the rose petals the machine hadn’t nabbed. “Why do you have all of this stuff laid out like this anyway?”

Only then did he glance up at me and notice the negligee. “What are you wearing?”

I wanted to cry. I knew we hadn’t been intimate in a long time, but this was ridiculous. “What does it look like I’m wearing, Greg?”

“Oooh,” he said, as realization set in. “I’ve just been preoccupied.” He took a step toward me. “I’m sorry, you know things have been crazy at work.” He stopped talking to manically pick up some rose petals that he missed. “I’m sorry, you know clutter bugs me. But I appreciate the effort.” He leaned in to kiss me.

I pushed him away, though not hard enough to send him down the stairs. “Are you serious?”

“No, it just caught me by surprise. Usually, you have on a head scarf and some sweats when I get in.” I was the one surprised when he added, “What’s the occasion anyway?”

I stood waiting for him to break out into laughter. Tell me I was being punk’d, anything. Finally I said, “Today, Greg. Fifteen years.”

The truth finally dawned on him. “Oh, my God, babe. Our anniversary. I am so, so sorry. You know I’ve been swamped at work, and I just completely lost track of what day it was.”

I shook my head in disbelief. The
tears I had been holding back made their escape. I had no words as I spun around and marched back to our bedroom.

I don’t know why I was even shocked. I decided to turn around and give him a piece of my mind. But before I could speak, I noticed him picking up rose petals in the hallway.

I wanted to leave. I didn’t even feel like taking the negligee off. I just wanted to get away from this suffocating house and away from my inconsiderate and unaffectionate husband.

Our once-a-week sexual escapades had dwindled to twice a month, then to once every other month. It was unreal. I used to think he was seeing someone else. After all, he’d cheated on me shortly after we got married. We’d gone to counseling and, I thought, moved past it. But the past three years especially had been brutal. I felt completely neglected. I’d even hired a private investigator to have him followed. But three thousand dollars later, all I discovered was what I already knew: my husband was simply a severe workaholic.

But tonight was the last straw.

I snatched a maxi dress off the hanger in my walk-in closet, then slipped it over my head. I then snatched a change of clothes and stuffed them in my gym bag. I couldn’t stand to be in the same house with him another minute.

I marched back downstairs. I found my husband actually taking out the garbage. “You can clean up the rose petals in the bedroom now,” I said, whisking past him.

“Babe, come on, don’t be mad at me. I was just taking the garbage out while I gave you a minute to
cool down.”

I ignored him as he followed me out in the garage.

I continued to ignore him as I got in the car and backed out. I didn’t know where I was going, but at the moment, any place that was far away from Gregory Mavins was exactly
where I wanted to be.

I CAN’T BELIEVE I PRAYED
for this.

I mean, growing up, all I thought about was becoming a mother. I wanted to be a wife and have a house full of wonderful kids.

That was my dream. This was my nightmare.

“Stevie, if you don’t get your butt down off of that sofa!” I screamed at my oldest son. “And now, look, the twins are up there, too. You know they’re going to do whatever you do.” I swatted at my ten-year-old and turned my attention back to the phone. I’d picked it up when it rang, but I hadn’t even had a chance to speak when I noticed my kids acting plumb fools. Again.