Read When My Brother Was an Aztec Online

When My Brother Was an Aztec 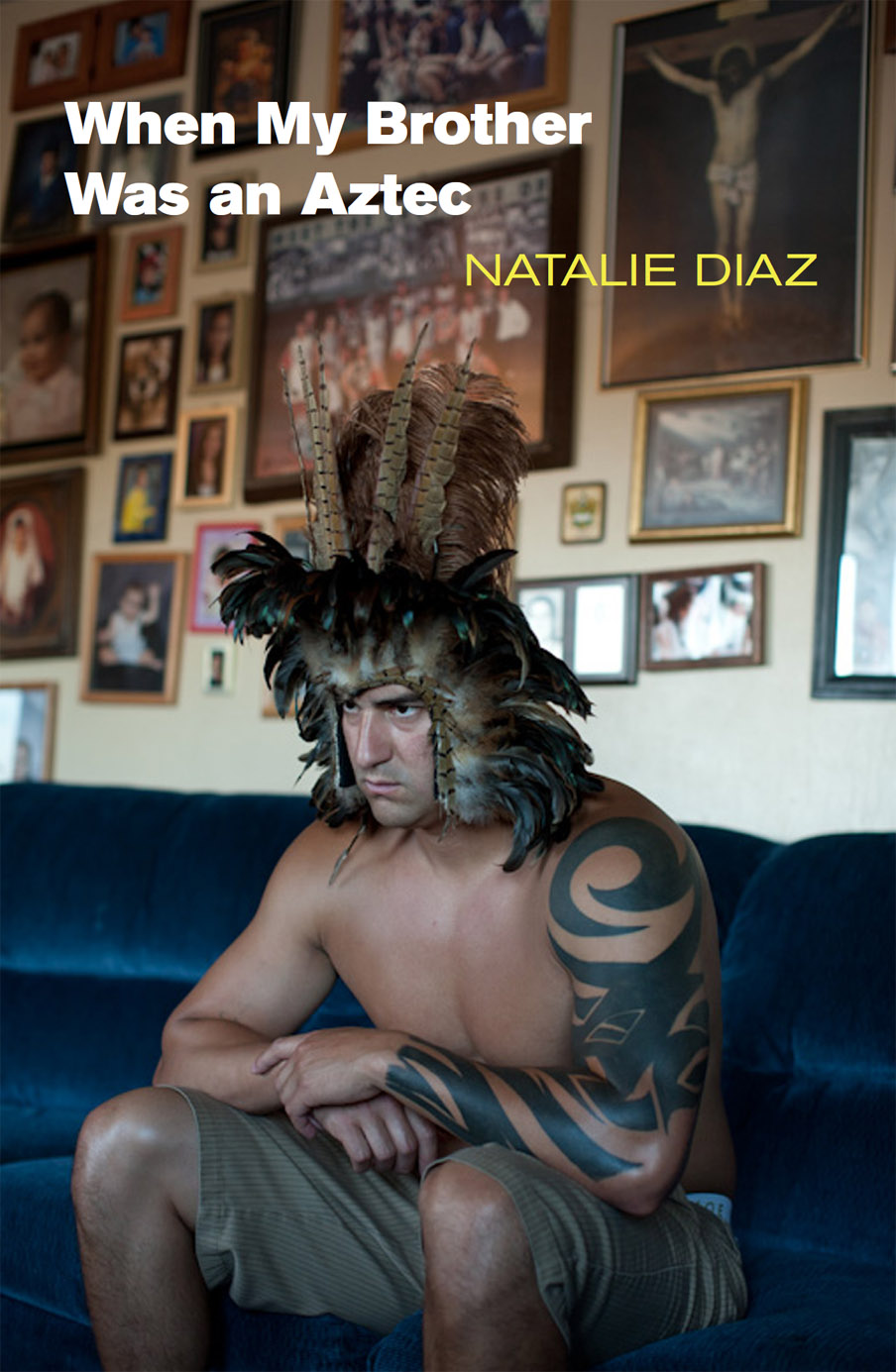 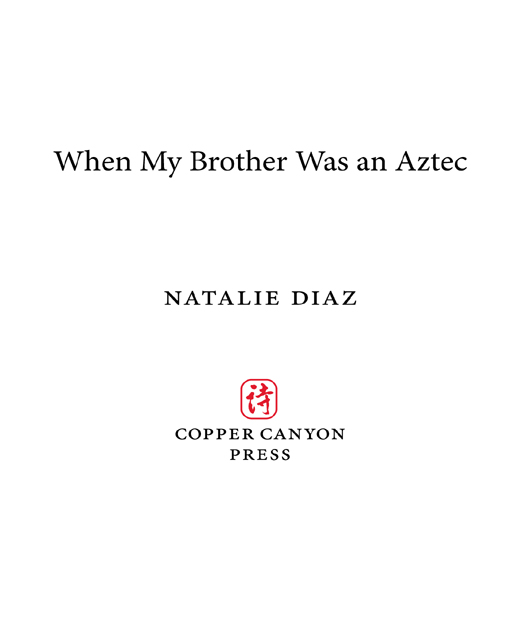 Copper Canyon Press encourages you to calibrate your settings by using the line of characters below, which optimizes the line length and character size:

Please take the time to adjust the size of the text on your viewer so that the line of characters above appears on one line, if possible.

When this text appears on one line on your device, the resulting settings will most accurately reproduce the layout of the text on the page and the line length intended by the author. Viewing the title at a higher than optimal text size or on a device too small to accommodate the lines in the text will cause the reading experience to be altered considerably; single lines of some poems will be displayed as multiple lines of text. If this occurs, the turn of the line will be marked with a shallow indent.

Thank you. We hope you enjoy these poems.

This e-book edition was created through a special grant provided by the Paul G. Allen Family Foundation. Copper Canyon Press would like to thank Constellation Digital Services for their partnership in making this e-book possible.

With immeasurable gratitude to Cecilia,
Diane, Eloise, Janet, and Ted

When My Brother Was an Aztec

he lived in our basement and sacrificed my parents

every morning. It was awful. Unforgivable. But they kept coming

back for more. They loved him, was all they could say.

It started with him stumbling along
la Avenida de los Muertos,

my parents walking behind like effigies in a procession

he might burn to the ground at any moment. They didn't know

what else to do except be there to pick him up when he died.

They forgot who was dying, who was already dead. My brother

quit wearing shirts when a carnival of dirty-breasted women

made him their leader, following him up and down the stairsâ

They were acrobats, moving, twitching like snakesâ They fed him

crushed diamonds and fire. He gobbled the gifts. My parents

begged him to pluck their eyes out. He thought he was

at his feet, wrecked honeysuckles, he lowered his swordlike mouth,

gorged on them, draining color until their eyebrows whitened.

My brother shattered and quartered them before his basement festivalsâ

waved their shaking hearts in his fists,

while flea-ridden dogs ran up and down the steps, licking their asses,

growing backâIt said a lot about my parents, or parents' hearts.

My brother flung them into
cenotes,
dropped them from cliffs,

punched holes into their skulls like useless jars or vases,

broke them to pieces and fed them to gods ruling

the ratty crotches of street fair whores with pocked faces

spreading their thighs in flophouses with no electricity. He slept

in filthy clothes smelling of rotten peaches and matches, fell in love

with sparkling spoonfuls the carnival dog-women fed him. My parents

lost their appetites for food, for sons. Like all bad kings, my brother

with a Mexican flag embroidered on it. When he wore it

in the front yard, which he treated like his personal
zÃ³calo,

all his realm knew he had the power that day, had all the jewels

a king could eat or smoke or shoot. The slave girls came

to the fence and ate out of his hands. He fed them
maÃ­z

through the chain links. My parents watched from the window,

crying over their house turned zoo, their son who was

now a rusted cage. The Aztec held court in a salt cedar grove

across the street where peacocks lived. My parents crossed fingers

so he would. He always came home with turquoise and jade

feathers and stinking of peacock shit. My parents gathered

what he'd left of their bodies, trying to stand without legs,

trying to defend his blows with missing arms, searching for their fingers

to pray, to climb out of whatever dark belly my brother, the Aztec,

their son, had fed them to.

Angels don't come to the reservation.

Coyotes, too. They all mean the same thingâ

eats angels, I guess, because I haven't seen an angel

fly through this valley ever.

he came through here one powwow and stayed, typical

Indian. Sure he had wings,

jailbird that he was. He flies around in stolen cars. Wherever he stops,

Like I said, no Indian I've ever heard of has ever been or seen an angel.

Maybe in a Christmas pageant or somethingâ

Nazarene church holds one every December,

organized by Pastor John's wife. It's no wonder

Pastor John's son is the angelâeveryone knows angels are white.

Quit bothering with angels, I say. They're no good for Indians.

some white god came floating across the ocean?

Truth is, there may be angels, but if there are angels

up there, living on clouds or sitting on thrones across the sea wearing

'xactly where they areâin their own distant heavens.

You better hope you never see angels on the rez. If you do, they'll be marching you off to

Zion or Oklahoma, or some other hell they've mapped out for us.

The year we moved off / the reservation /

turquoise thunderbird on the chest

the color of my grandmother's skin / reddish brown /

My first Halloween off / the reservation /

that I was wearing his old costume

I looked at my hands

All them / whites / laughed at me

threw Tootsie Rolls at / the half-breed / me

Later / darker / in the night

I made a / good / little Injun his father said

He gave me a Tootsie Roll

Mothers gathered their / white / kids from the dark

while I waited to gather my / white / kid

I waited to gather / white / Jeremiah

He was / the skeleton / walking past my house

a glowing skull and ribs

His candy spilled out / like a million pinto beans /

I hit him harder and harder / whiter / and harder

He cried for his momma

I put my fist-me-downs / again and again and down /

He cried / for that white / She came running

She swung me off him

dug nails into my wrist

pulled me to my front door

yelled at her / white / kid to go wait at home

go wait at home Jeremiah, Momma will take care of this

She was ready / to take care of this /

to pound on my door / but no
tricker treat
/

My door was already open

and before that white could speak or knock

my mother told her to take her hands off of me

taker
/
fuck-king
/
hands off my girl

My mother stepped / or fell / toward that white /

I don't remember what happened next

well / Kemosabe / you ruined your costume

my mother said / maybe / next year

you can be a little Tinker Bell / or something /

Streak of Lightning by Clare O'Donohue
The Timeseer's Gambit (The Faraday Files Book 2) by Kate McIntyre
How to Tame a Werewolf: Seven Brides for Seven Shifters, Book 3 by Thalia Eames
B00B1W3R6U EBOK by J., Anna
Bourne 4 - The Bourne Legacy by Robert Ludlum, Eric Van Lustbader
The Waterfall by Carla Neggers
To Die For by Phillip Hunter
Half Past the Witching Hour (Paranormal Personnel Saga #3) by Joanna Mazurkiewicz
The Seer by Kirsten Jones
Who Was Changed and Who Was Dead by Barbara Comyns
Our partner