Read When the Music Ends (The Winter Rose Chronicles) Online

When the Music Ends (The Winter Rose Chronicles) 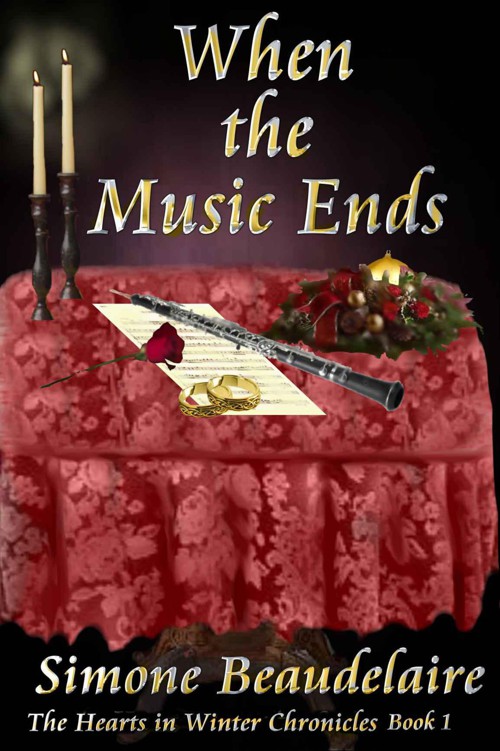 When the Music Ends

This story is a work of fiction. Any resemblance to actual events or
people, living or dead, is coincidental.

Copyright ©
2013 by Simone Beaudeliare. All right reserved. No part of this book may be
reproduced or transmitted in any form or by any means, electronic or
mechanical, including photocopying, recording, or by any information storage
and retrieval system, without permission the author’s permission.

This book is
dedicated to my beta team: Sandra, Reed, Guy, and Jill. Thanks guys, I
couldn’t have done it without you.

Other Books by the Author
258

"Hello," Sean Murphy called as he entered the door of the
century-old white Colonial house in which he had grown up. The age darkened
two-panel door slammed shut behind him in a gust of chilly October wind. He
stepped into the silent living room with its knotty pine floor and red,
rose-patterned area rug, with matching rose printed sofa, two red armchairs,
and an antique wooden rocking chair flanking the brick and brass fireplace.  His
parents, it appeared, were out. His younger sister, however, was in her room,
and he heard her muffled greeting through the door.

Slightly
bemused, he climbed the polished wood stairs to Sheridan’s bedroom. He
opened the door and was unsurprised to see his seventeen-year-old sister was
not alone. Sheridan’s best friend Erin James was with her. The girls were
sprawled on Sheridan’s pink and lace canopy bed. It was interesting to
look at them together, as they couldn’t be more opposite. Sheridan was tall and curvy and looked like sunshine brought to life. She had fair but
slightly golden skin, and masses of blond curls, and a cheerful demeanor. She
loved poetry and was a true romantic. Erin on the other hand was small and very
pale, with dark hair and eyes and an intense, artistic personality. And yet the
girls had been friends since they were in kindergarten together at the local
Catholic elementary. Sheridan jumped from the bed and ran to her brother, and Erin sat up, her cheeks flaming at the sight of him.

"Hey,
Sis, what did you need?" Sean asked as he received his sister’s
exuberant hug.

"Your
timing is perfect, Sean. I need you to take Erin to the homecoming
dance."

"Huh?"
Sean looked at Erin and saw that her fair cheeks were even more deeply pink. He
was quite sure this had not been her idea.

"Yeah,
this stupid guy has been messing with her, making her think he would take her,
but he really just wanted her to help him study. Today we found out that he was
going to the dance with Lindsey Jones, the tramp. We know what he wants, and no
loss there, but now Erin doesn’t have a date, and the dance is tomorrow.
Would you please take her?"

"Sheridan, please," Erin said softly, "I don’t need this. I don’t
care about homecoming and you know I can’t dance. I’ll just stay
home and practice for that audition."

"It’s
about time you ditched that dickhead," Sean commented, making both girls
giggle. "He’s nowhere near good enough for you, Danny. Why
don’t you forget about him and you and Erin go together. That would be
better wouldn’t it?"

"Come
on, Sean. It’s not nice to dump someone just before a dance, and
he’s nominated for homecoming king. Oh, don’t worry; I’ll
break up with him. I think it would be more polite though to do it after the dance
and after the SATs next week too, so he’s not distracted. But that still
leaves Erin. She can’t come with the two of us. It’s too pathetic. Erin deserves better than to be the third wheel. But just think, Sean, if she comes with a
man instead of one of these little boys."

Sean
took a moment to consider. He had never thought of Erin as someone to date, but
there was certainly nothing wrong with her. She was quite pretty and very
sweet, an excellent friend to his sister. If he hadn’t known her his
whole life, it wouldn’t be hard to see asking her out. On the other
hand…

"Yeah, I know what will happen. I’ll be arrested. Sheridan, I’m twenty-three. What do I care about homecoming?"

"Probably
nothing. But do you care about Erin?"

"Of
course. You know what, Erin, come here a minute. I think we should talk about
this without Danny for a while."

"Okay."
She walked out into the hallway with him, and he led her to the room that used
to be his, still decorated with all his old high school memorabilia; his
trophies for swimming relays, discus, and shot put, along with his old
full-sized bed (he had bought a queen size when he rented his apartment), with
its green and blue comforter. No area rug adorned the floor here, despite his
mother’s frequent urging. He preferred to see the beauty of the hundred
year old wood. He turned to Erin, who was standing nervously near him, leaning
against the thick footboard.

"I
hope you know," she said earnestly, "That I didn’t ask her to
do that."

"Of
course not. I can smell a Sheridan Murphy plot a mile away. She’s my sister,
don’t forget. However, she is right about one thing. You do need a date.
That is, if you really want to go. Tell the truth, Erin. Do you really want to
stay home and practice?"

Erin
’s cheeks were very pink, but she said
softly, "No, I would like to go. I really can’t dance,
though."

"It’s not a question of rhythm but of self confidence. I
always feel silly dancing in front of a room full of people."

"How about if you have someone confident leading the way, kind
of like a director?"

"That might help." She looked down shyly. Sean hoped he
was doing the right thing. He was aware that Erin had had a crush on him for a
while. It was kind of sweet, in an embarrassing sort of way. Erin was still in
high school after all, and while she was pretty, her shyness was a little
overpowering.

"Okay then, let’s do it. At least we can show that boy
what he’s missing."

"Are you sure? Don’t you have plans?"

"Naw. Just boring stuff, you know, like laundry. So, Erin
James, will you let me take you to homecoming?"

She gave him an intense look, her dark eyes glowing with eagerness
as she said, "Yes." Her voice was so tiny he almost didn’t
hear her. He gave her a brotherly hug around the shoulders. She fled the room.
Well, one thing Sean had not expected was to be pressed into service at a high
school dance. Maybe it would be nice to have a change of pace, step out of
everyday life for a while and just do something fun, especially with a girl who
adored him. That might be interesting. And if not, he would have done a good deed
and made his sister and her very nice friend happy.

The
following night, Sean arrived at Erin’s house dressed in a fitted green
button up shirt and some dark slacks, trying to look as mature as possible.

She lived in a very prestigious neighborhood, near the university.
It was a status symbol to own a home in this ritzy area. The homes were so
expensive that they could only afford a tiny one on their combined salaries,
although her father was an investment consultant, and her mother was commercial
artist. It was a miniature two-bedroom home, painted tan with green shutters
and a stained-glass door. Sean rang the doorbell and waited hoping that
Sheridan, rather than Erin’s mother, had helped the girl choose her
clothes. Erin’s mom was a silly woman who still felt her daughter looked
best in strange artist creations that did nothing for her slim figure. His
sister had much better taste.

Erin opened the door herself and Sean was relieved to see her wearing a touchably soft
black velour knee-length dress. It contrasted with her skin and made her dark
hair, done up in an elegant twist, seem to glow. Sheridan must also have helped
with the subtle application of makeup. Erin looked at least five years older
than she was. She was also more confident than he had seen her before, meeting
his eyes without blushing, and smiling sweetly.

"Hi,"
he said, a little surprised by the transformation. Then he held out a corsage that
consisted of a single red rosebud. She stepped forward and he carefully pinned
it to her dress, breathing in a waft of lilac that enveloped her.

"Do
you need me to come in and say hello to your folks or anything?"

"I’ll
tell you in the car." There was a hint of tension in her voice.

He
walked her out to his Mustang and opened the door for her. Even though this
wasn’t really a date, every girl needed to feel like a princess now and
again, and Sean guessed that Erin didn’t get much of that. He slid into
the driver’s seat and turned on the ignition before saying, "Okay,
what’s up?"