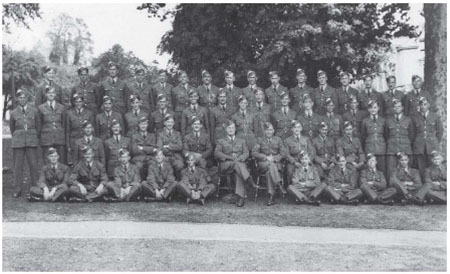 B Flight No. 2 Squadron, 3 ITW, September 1940. Signatures on the reverse of the photograph were annotated by Len Thorne during the 1940s as information came to him. There are notations for those who failed the course, those killed in training accidents and some missing or killed in action. Red ovals, ‘halos’, were sometimes used to indicate deaths. 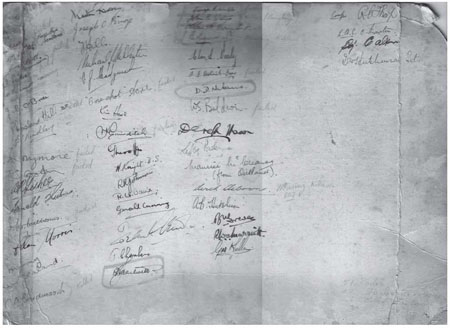 Early in December I was posted to No. 9 SFTS, Hullavington, for advanced training, first on the Miles Master Mk 1, then to Hawker Hurricanes for all solo flying. I successfully completed the flying course, attended the passing out parade in April 1941 and received the coveted Silver Wings on April 13th, the date of my 21st birthday. I was then promoted to the rank of sergeant. My next posting was to No. 57 OTU, Hawarden, near Chester, for intensive training in the art of a fighter pilot, most of the instructors being those men who had survived the Battle of Britain. I experienced my first solo in a Spitfire Mk 1, flying from Speke airfield, now Liverpool airport.

I was posted to Catterick in late May, to become a member of 41 Squadron, flying the more advanced Spitfire Mk 2 and, after a period of flying patrols over the northeast coast, I moved to Tangmere to take part in operations over enemy-held France. Here I saw my first enemy aircraft and experienced my first anti-aircraft fire.

After a period with ‘41’, I was posted to No. 602, City of Glasgow, Royal Auxiliary Airforce Squadron, to complete a full tour of operations lasting until May 1942. I flew under the command of many famous fighter leaders, among them Al Deere, Paddy Finucane, Francis Victor Beamish, Findlay Boyd and several others. In January 1942 I was promoted to Flight Sergeant and became senior NCO pilot in ‘A’ Flight, authorised to act, on occasions, as a flight leader. In the course of this service I was credited with five victories, three confirmed destroyed, two others probably destroyed and three damaged. In 602 we had Spitfire MkVb’s armed with 20mm cannons.

In May 1942 I was posted, on rest, to the AFDU, the Air Fighting Development Unit, which was then at Duxford and after six months I was offered the chance to become an experimental test pilot and remain at AFDU as one of the permanent staff. The following year, in August, I was appointed Flight Commander of the unit. My most notable task at this time was to fly captured enemy aircraft, including the much-feared Focke Wulf FW 190. Apart from normal flights and comparative tests I took the latter machine all over the country giving demonstrations and mock combat to our own pilots. In the spring of 1945 I was briefly acting OC flying during the absence of S/Ldr. T.S. Wade. Also at that time I had a partial rest from flying and performed the duties of range instructing officer at the Selsey bombing and firing ranges.

At
the end of the war, in August 1945, I was offered a posting to the Air Ministry in London and for the next three years I was attached to the Ministry of Supply as a liaison officer with the aircraft manufacturing companies. The end of my service career came in September 1948 when I returned to civilian life.

Towards the end of September 1940, at the height of the Battle of Britain, I was posted to No. 7 E.F.T.S. (Elementary Flying Training School), Desford, near Leicester, to be taught to fly De Havilland Tiger Moth biplanes.

The sequence of flying lessons is in accordance with the following numbers:

I believe that 11, 14, 18 and 21 are lessons that apply to multi-engined aircraft training.

7 October
: In my logbook at this point is a pencilled note, as follows:-

29 October
: Although we started out full of confidence, it still came as a surprise when we achieved our first solo flight. On this day, after weeks of training, I made the first flight of the day with F/Lt Hall, my usual instructor. There was nothing untoward about it so it came as a surprise when, for my next flight, I was taken up by Sgt Males who, although an NCO, was a very experienced instructor and he put me through the complete list of exercises I had learned so far. After landing, we taxied in to the dispersal point and he climbed out, leaving the engine running. To my amazement he was holding the joystick (control column) from the second cockpit. He shook it towards me and shouted, ‘She’s all yours; do one circuit and landing then come in and switch off.’ There is a song that originated in the Navy that starts:

Bluedawn (A Watermagic Novel, #2) by Brighton Hill
Tales of Majipoor by Robert Silverberg
Winning the Queen's Heart: Contemporary Christian Romance (The Brides of Belles Montagnes Book 2) by Moncado, Carol
The Lavender Ladies Detective Agency: Death in Sunset Grove by Minna Lindgren
Life Among Giants by Roorbach, Bill
Alive! Not Dead! by Smith, R.M.
The Twelve Kingdoms by Jeffe Kennedy
In the Body of the World by Eve Ensler
Sick by Ben Holtzman
Trent (Redemption Romance Book 4) by Anna Scott
Our partner