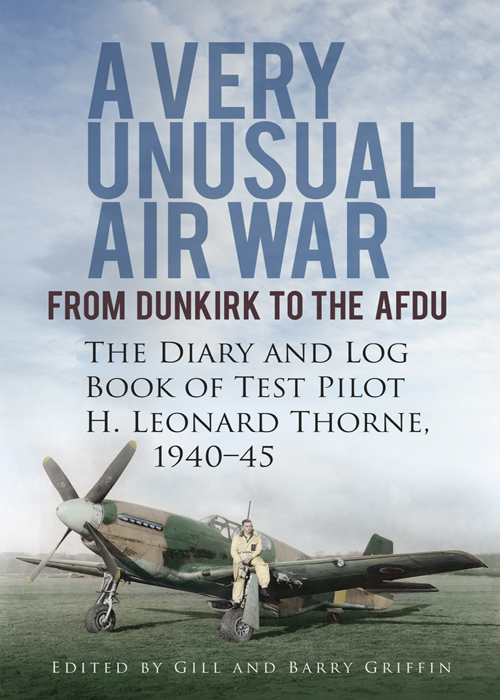 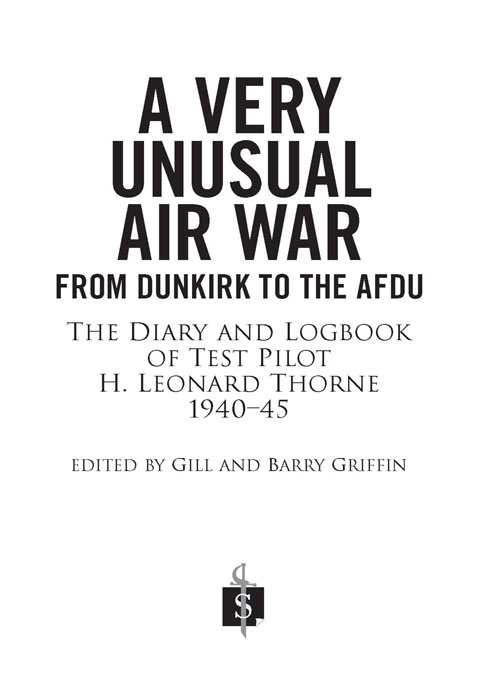 Dedicated to
the memory of F/Lt H.L. ‘Len’ Thorne, A.E. and all of the brave men of Fighter Command who took part in the Second World War and subsequent conflicts.

Edited and made ready for publication by the author’s daughter and son-in-law, Gill and Barry Griffin.

Any errors are purely ours or Len’s.

2  Aerodromes at Which I Landed or From Which I Operated

4  Some Recollections of Those I Have Known 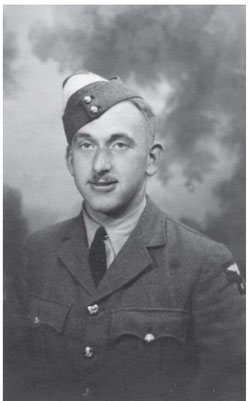 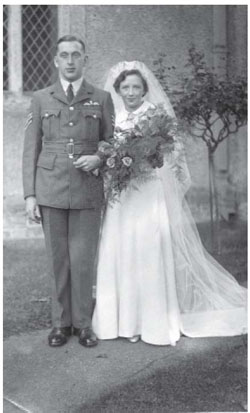 Len and Estelle Thorne on their wedding day, 16th September 1941. 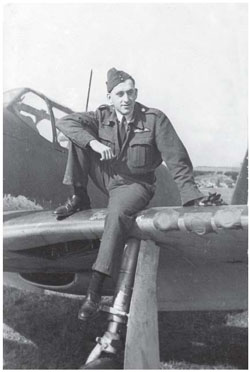 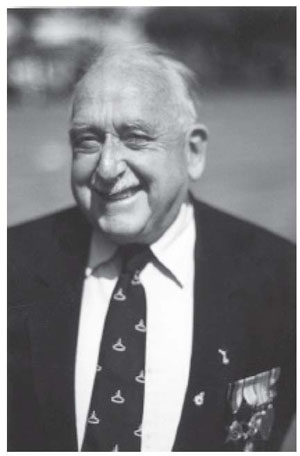 Len in September 1990, dressed for a church parade in Stratford-upon-Avon.

Len and Estelle Thorne on their wedding day, 16th September 1941

Len in September 1990, dressed for a church parade in Stratford-upon-Avon

Group photograph of RAF cadets of 3 ITW on Babbacombe beach. Late May 1940

Cartoon by Aitkin of Al Deere

Sgt Sanderson inspecting the cannon shell damage to his wing

Tadeusz ‘Teddy’ Kulczyk and Len Thorne with Mustang Mk I

Inter-unit Christmas card to Len from his brother Leslie

Certificate for a ‘Mention in a Despatch’, June 1944

Certificate for a Mention in a Despatch, January 1946

Visit to Hullavington in 1991 with John Timmis and Ron Rayner

Len with Connie Edwards and Spitfire MH415 in Texas, 2000

Below is a photograph of a page in Len Thorne’s logbook dated October 1941. The left-hand side has been copied almost exactly in the following pages of this book but the right-hand leaf has had to be condensed so that both can be displayed on one sheet. There are columns for Single-Engine and Multi-Engine aircraft, sub-divided into Day and Night Flying. This is further divided into Dual or Pilot in single-engine aircraft and Dual, 1st or 2nd Pilot in multi-engine aeroplanes. There are also columns for Passenger, Instrument or Cloud flying. These have all been condensed to three columns, Dual, Pilot or Passenger. The detailed notes on the right-hand leaf have been incorporated into the story told in the text.

The summary boxes occur at the end of each month. They give details of the hours flown on each type of aeroplane and are signed by the pilot, the officer in command of a ‘Flight’ and the squadron leader. In this case the O/C ‘A’ Flight was F/Lt Norman C. Macqueen, DFC. Six months after this, on 4th May 1942, he was killed when his aircraft was hit by tracer fire from an ME109, while he was flying with 249 Squadron over Malta. The 602 squadron leader who signed above was Al Deere. Some of the figures in the flying columns were written in red. This denoted night flying. 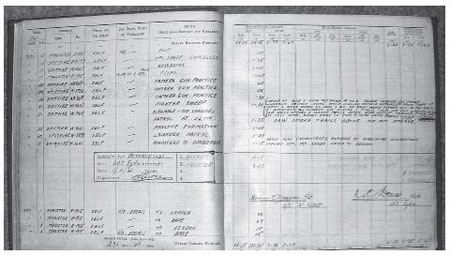 This book was first conceived almost accidentally. Len Thorne was a Second World War fighter pilot. He still had his wartime logbook and it was one of his proudest possessions. It was originally to have gone to his younger daughter, who lives in Texas. When he was in his 85th year he decided that he did not wish it to leave England and so it was willed to the Imperial War Museum at Duxford. Because he could not keep his promise to give the logbook to his daughter, he felt guilty. This led him to make a handwritten copy of the book to give to her. When it was completed and handed over, he thought he should also give a copy to his elder daughter. She persuaded him that his reminiscences should be formalised so that we did not lose this first-hand history. Len found that the exercise of writing out his logbook had brought back many memories, so he created another manuscript copy, this time annotated with all his memories of the events which took place during his wartime RAF career and many of the people he had known. This book is the result.

It shows him to be one of the unsung heroes of the Second World War. He completed two tours of front line duty as a fighter pilot, when their life-expectancy was between two and four weeks. He then went to AFDU, the Air Fighting Development Unit, where he spent the rest of the war combat-testing new British, American and captured enemy aeroplanes.

Yet he was never decorated. He had been recommended for a medal and the citation had been written up but a change of commanding officer sent his medal elsewhere. I would not say he was bitter about it but the fact that he had no decoration did leave a scar. He was twice ‘mentioned in dispatches’, once for flight testing various Allied planes but mostly for flying comparative combat trials and demonstrations in the Focke Wulf 190A-3. His second mention was for flight testing, under operational conditions, the Spitfire Mk XXI in comparative trials against RAF, FAA and USAAF fighters to evaluate its suitability for service use and to prepare and submit a detailed report.

Transcription by Ike Hamill
The Half-Stitched Amish Quilting Club by Wanda E. Brunstetter
La ciudad de oro y de plomo by John Christopher
Miss Laney Is Zany! by Dan Gutman
Something in My Eye: Stories by Michael Jeffrey Lee
The Seven Year Itch by S D Skye
Barely Alive by Paulson, Bonnie R.
Desire (#4) by Cox, Carrie
The Talking Horse and the Sad Girl and the Village Under the Sea by Mark Haddon
The Other Child by Joanne Fluke
Our partner