21 March
: When acting as ‘safety pilot’ our flying time was booked as passenger, when actually we had to remain alert and in control. I see, in my mind’s eye, those other young men as they were 66 or so years ago.

26 March
: Our early lessons in formation flying were based on what was known as VEE or VIC formation: 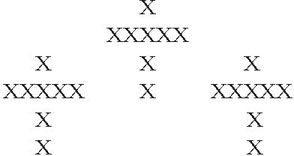 The tight VEE formation left little chance of watching our tails, the direction from which the most lethal of enemy attacks came. A relic of World War 1, it was continued until 1940 by the RAF. As a result many of our aircraft were unnecessarily lost. By mid-1941, when I joined a squadron, the lesson had been learned the hard way and the outdated VEE gave way to the ‘finger four’ used so successfully by the Luftwaffe fighters:

In the open ‘finger four’ the aircraft were well apart, allowing all pilots to weave back and forth to maintain a constant watch to the rear and also to allow individual freedom of action.

27 March
: The cross-country No. 1 was from base to a single destination and return with or without landing. Cross-country No. 2 would have been a triangular course and No.3 a rectangle. On one of these cross-country trips I acted as leader and flew to Poletrees Farm between Bicester and Aylesbury, the home of my younger sister, Gwen, and my mother. When I made one or two low passes, Mother appeared, waving her apron and, according to Gwen, shouting, ‘Get up Len! Get up Len!’ My brother-in-law, Joe Cooper, always swore that on one pass I almost knocked him off the hayrick that he was building.

5 April
: My ‘wings test’ on this date was, to say the least, interesting! P/O Davies was, I believe, another of those officers who had themselves been trainees only two or three courses earlier. The ‘wings test’ was a three-leg cross-country flight, from base to a map reference in the hills of South Wales, using a normal map. The second leg was to a point somewhere near Northampton, with only a map circle of 10 miles radius. From there we had to set course and fly by instruments and dead reckoning back to base. It happened that on this day the weather was extremely poor but considered good enough to make the test flight. Setting out in rain and low cloud, together with poor visibility, we were not too sure that we correctly identified the point in one of the South Wales valleys. We pressed on but got lost on the middle leg and failed to hit the map circle. After reaching our ETA (estimated time of arrival), we turned back and my instructor told me to land on any airfield we spotted. Sure enough, an airfield appeared and I landed, narrowly missing a steam-roller! We found that it was a new field under construction, with only the contractor’s workmen in sight. They told us where we were so we took off and, at the right ETA, landed back at Hullavington. As no one there knew the true facts, we ‘cooked the books’ and so I passed my test.

7 April
: Although not recorded, I believe that our night flying on April 7th was at a small grass airfield near Castle Combe, alleged to be the prettiest village in England, whilst that on the 30th March was at Babdown Farm. On the latter date a Luftwaffe bomber, I recollect that it was again a Heinkel 111, dived across the landing area and machine-gunned the line of goose-neck flares, causing no damage. Fortunately, he dropped no bombs; otherwise the story might have had a different ending. Night flying was perhaps the most dangerous part of our training but most of us thoroughly enjoyed it. The highlight of the proceedings was a midnight breakfast by lamplight, bangers, bacon, eggs, baked beans and chips in abundance. As the weather improved, the pressure increased to get us into operational readiness. The number of flights per day was stepped up, my record being five on April 7th.

10 April
: I can truthfully say that after my wings test on April 5th I never got lost again although I frequently called flying control for a homing, i.e. a magnetic bearing to base. It was usually laziness on my part, although it was always welcomed by the WAAF plotters and flying control officers. The young ladies of the WAAF
staff got a lift from hearing the voices of their heroes, the young and dashing ‘Brylcreme boys’. Much later, in 1943/44, when flying test missions, I had several emergencies and had to call for priority landing. My friend F/O Vic Merritt said that he always recognised my call, so quiet and calm whatever the circumstances; little did he know!

P/O Mehta and P/O Dutt were two of the Indian Air Force officers who were with us on course No.28. The Sikhs stood out particularly, as they wore their usual turbans but in pale air force blue, with the small wing emblems on the side.

12 April
: This was the final flying test, on the results of which we were awarded those coveted silver wings.

13 April
: In my logbook opposite the final entry for April 13th is a pencilled note: ‘My 21st. birthday & my wings.’ During that afternoon, the successful cadets attended the ‘Wings Parade’ and that eagerly awaited wings badge was pinned to our tunics, for me to wear with pride for the following seven years. What a 21st birthday present.

Plain Wisdom by Cindy Woodsmall
Because the Night (The Night Songs Collection) by Strassel, Kristen
March by Geraldine Brooks
The Man Who Melted by Jack Dann
The Summer House by Jean Stone
It's Only Temporary by Pearson, Jamie
Book of Shadows by Alexandra Sokoloff
Ghost Horses by Gloria Skurzynski
EnemyMine by Aline Hunter
Pale Shadow by Robert Skinner
Our partner