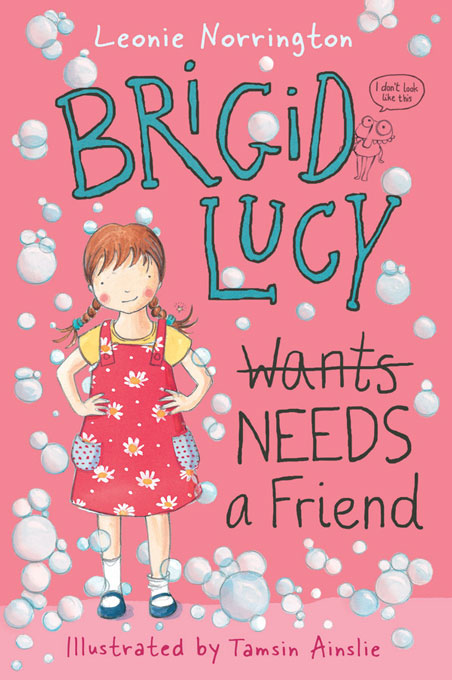 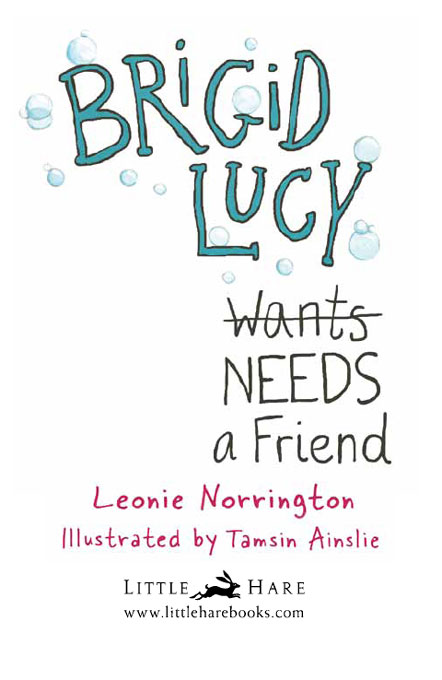 First published 2013
Published in this edition 2013

All rights reserved. No part of this publication may be reproduced, stored in a retrieval system or transmitted in any form or by any means, electronic, mechanical, photocopying, recording or otherwise, without the prior written permission of the publisher.

Chapter one:
pirates and pigsties

Chapter four:
Dad does it wrong

Chapter ten:
then a miracle happens

To Josephine Marie Izod, who inspired the character Matilda—LN

For my brother, Luther, who was always my best friend when I needed one—TA

Hello. You’re a reader, aren’t you? Do you know who I am? I’m the Brigid Lucy storyteller person thing. I tell all the stories about me and my
best friend
, Biddy.

If I was an imp I would look like this…

But I don’t.
Slip sloppy Goolag
. I would never want to have fluffy wings or long toenails.

Now let me tell you the story…

How did me and Biddy become best friends?

Biddy used to live on a farm and I lived in the
Great Bushland
that spread out way beyond infinity all around the farm. One day, I was playing in a gum tree when I heard a loud sob. I got such a fright, slipped and tripped and
plonk!
I landed in Biddy’s hair. She was crying, ‘I’m not going away,’ she sobbed. ‘I’ll never find a friend in the city.’

‘Do you want a friend?’ I said running out to the end of her nose. ‘I do too. I’ve wanted a friend for a million years. Can I come to the city and be your friend?’

But she ignored me and kept on crying. That’s when I realised that she couldn’t see me or hear me. So I climbed into her hair and became her ‘best friend’ all by myself.

And we’ve had the most exciting adventures. One time we went to a pet shop and I flew on a parrot. Another time we went into a princess tower. An evil wizard had turned a princess into a huge copper bell and locked her up. We helped her escape.

But Biddy doesn’t like being my friend. She wants a human best friend. One who is popular. (
Popular
is like if you have a new car, or a pony like Annabelle, or do ballet with soft shoes and glitter like Sascha.) When Biddy first came to the city, she tried to get a friend at school. But Annabelle was Vanessa’s best friend, Sascha was Padula’s best friend. And Molly and Alice had each other. There were no friends left for Biddy. So Biddy made a plan to find a friend outside of school, during the holidays. 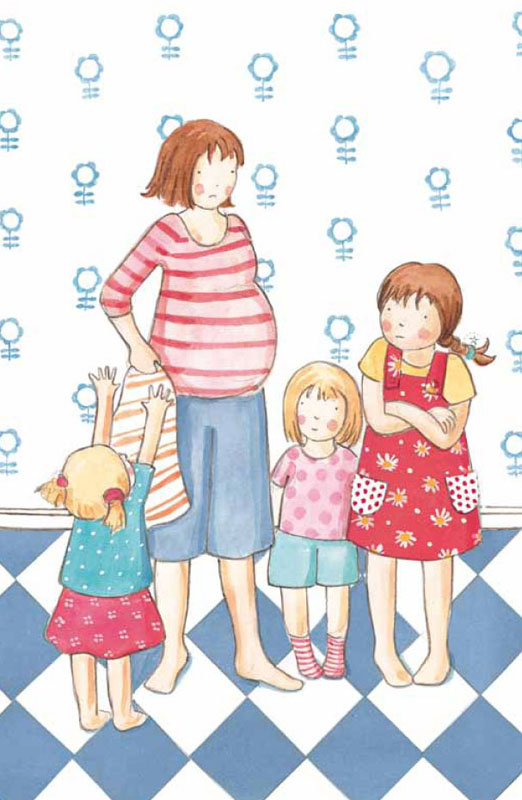 But Biddy’s mum is ‘
expecting-again
’ (which is like getting really fat). So she doesn’t want to go out. All she ever does is cleaning and washing and cooking. And looking after Biddy’s little sisters Miss Getting-All-The-Attention Matilda and Crybaby Ellen.

I don’t care. I love staying home and playing imagination games. But Biddy says, ‘I’ll never find a best friend if I stay home the whole of the school holidays.’

‘Biddy, darling,’ Mum says, ‘I said we could go to the Botanic Gardens on Friday. Dad is taking the day off to come with us.’

Me and Biddy love the Botanic Gardens. It is the most
magical
enchanted place in the whole city. But Friday is nearly a year away.

So Biddy says, ‘Can’t we go today?’ And when Mum says ‘no’ Biddy yells, ‘You don’t care if I never get a friend.’ And she bursts into tears. ‘You are the meanest, horriblest mother in the world.’

‘How can I find a friend in a locked-up bedroom prison?’ Biddy yells, and throws herself on her bed. ‘I wouldn’t be rude if you let me get a best friend.’ Then she puts her face in the pillow. ‘I will never find a friend,
never ever
.’

I do feel sorry for Biddy. But I don’t want her to get a human friend. What if she gets one that hates imagination games like Jamie next door? Or hates reading like Annabelle? Or says, ‘No you can’t play with us,’ or, ‘You’re not my friend anymore’ stuff, like Bree?

But she ignores me and sucks her thumb.

‘Fine,’ I say stomping back into her hair.

‘Be boring, then. I don’t want to be your friend when you do boring sucking thumb stuff.’

So that’s the problem. (You know how all stories have a problem? Well that is the problem for this story.) Biddy wants to find a
silly
human friend and I want her to play with me––her already best friend.

Shall I tell you that story? Okay. Wait— I have to start it properly… I’ll just stand up here on the top of Biddy’s head like a real storyteller.

‘Long ago, before the dawn of time…’

No, I can’t say that because it is happening right now…

‘One day,’ I start again, ‘there was a little girl called Biddy. Her
evil
parents had locked her in a bedroom prison. Biddy was so sad. But her invisible friend (that’s me)…’

‘Am I boring?’ Biddy interrupts. ‘Is that why I haven’t got a best friend?’ 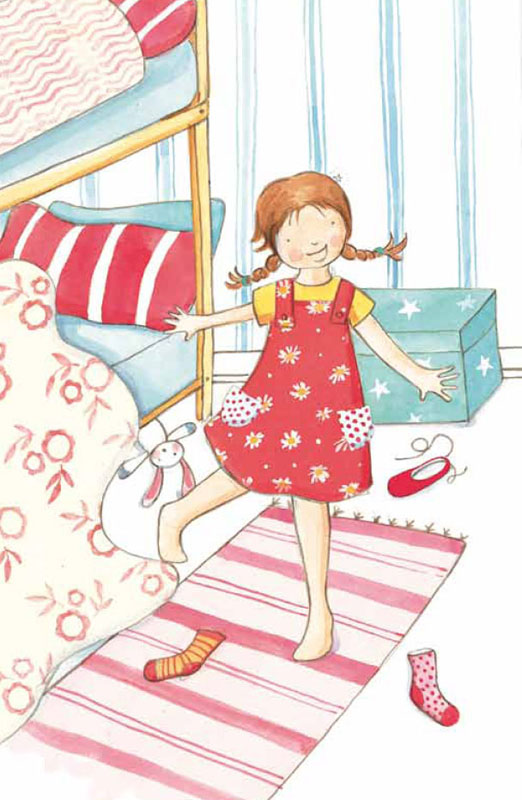 ‘If I was a
pirate
I wouldn’t be boring,’ Biddy says, jumping off her bed.

‘Biddy, stay still,’ I yell. But it’s too late. She is running and I’m slipping. I grab a handful of hair and swing out behind her. ‘Wait,’ I yell. ‘You are getting into the story without me.’ 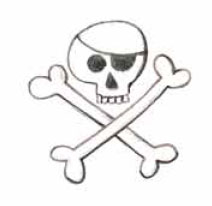 ‘I need a pirate costume,’ Biddy says, tipping over her toy box and rummaging through the toys. ‘Ah-ha! My dagger!’ She spins around with her dagger in her hand, threatening all the other pirates on the pirate ship. ‘Now, where is my pirate hat?’