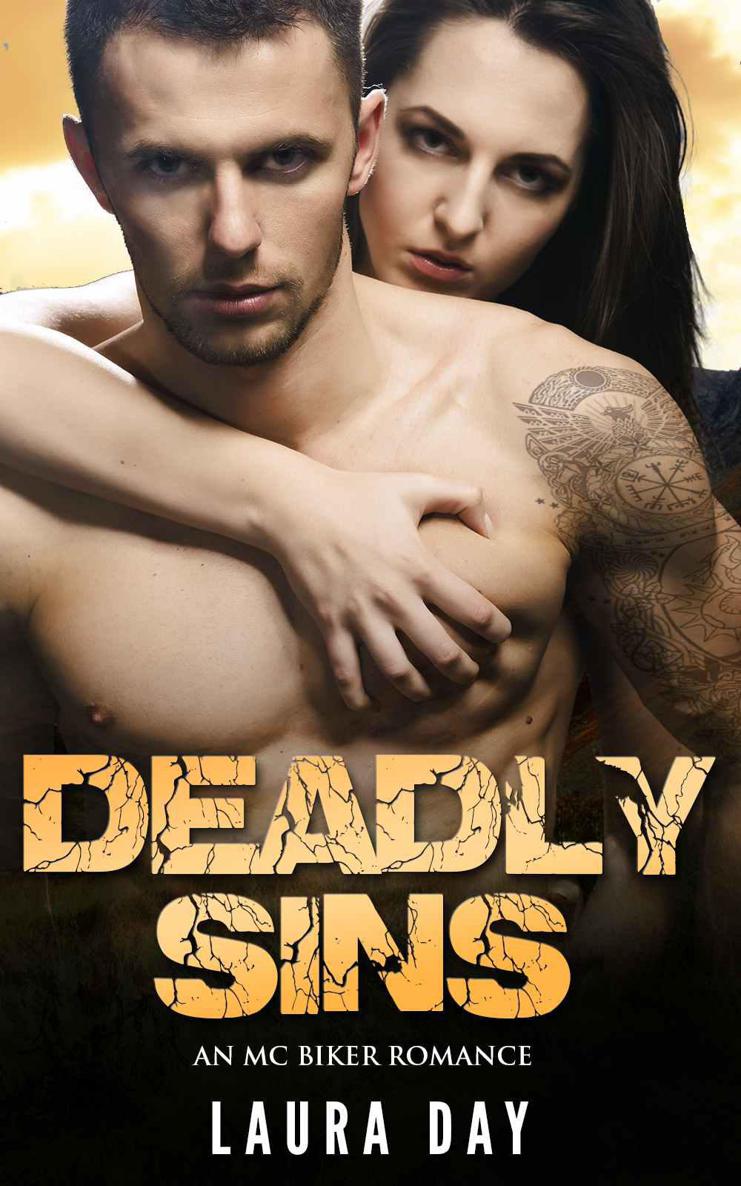 This is a work of fiction. Any names, characters, places, and incidents are products of the author's imagination or are used fictitiously and are not to be construed as real. Any resemblance to actual events, locales, organizations, or persons--living or dead--is entirely coincidental

Deadly Sins
copyright @ 2014 by Laura Day. All rights reserved. No part of this book may be used or reproduced in any manner whatsoever without written permission except in the case of brief quotations embedded in critical articles or reviews.

Laura Turner had to show her studio pass, and ID, at the gate, and then at the movie set gate, and then again to the guard of the set itself. After this movie though, she was sure that she wouldn't have to show h
er ID in the future. She would be recognized.

She had begun her career as an actress when she was fifteen. After nearly nine years of bit-parts, and walk-ons, with a few commercials and TV gigs to pay the bills, Laura was now the leading female role of a major action movie. An In a Theater Near You movie.

The script was all action, and she had to show some tit, but it was a good story. There was also a sex scene, which the director, Mike Stevens, warned her was going to be as hot as he could make it, without actual sex.

Apparently, what Mike Stevens wanted, and what the studio would allow, were two different things. So she signed the papers. Then she mentally prepared herself for the crew, and most of the cast, to see her fully naked, and faking orgasms.

According to her last boyfriend, she was good at this, but still, it made her nervous. The thought of a live audience was more of a concern than the filmed performance.

Laura was 5'8'' and 125lbs. Bold red hair, narrow waist with good curves above and below. She never lacked for male attention, and occasionally some female interest, which didn't interest her, but was an ego rub nonetheless.

She understood that it was her physical attributes which got her the role. That, and her scream, which debuted in a horror film where she was torn to pieces by zombies.

Mike Stevens mentioned her scream several times, assuring she could still perform. He also wanted to ensure that her nipples were pale and didn't need make-up. She satisfied him that they would not need make-up, if he was looking for pale. That was a little embarrassing, but he didn't seem anything but interested in a professional way. Her agent also told her he was gay. "As gay as they come, trust me," Mark had said.

It was a wonderful feeling, coming into the studio for her first day. She was directed to her very own trailer, where she found several dozen roses, and some candy from various people in the studio, and the producer. The note from the producer was handwritten, and she chose to believe it was his handwriting, not a secretary's.

After thirty minutes of going over the script parts scheduled for the day, she stepped out of her trailer, ready to perform.

The first day was not for slackers. Mike wanted several scenes complete, and pushed to keep his schedule unimpeded.

The male leading role was Brick Tanner, who was just as yummy in person as he was on the screen, though a little shorter. He wasn't Brad Pitt, but then, who was? He was close though, very close. Close enough that the thought of rubbing bodies with him wasn't unappealing.

When she met Roman, however, Brick took a backseat in her libido's interest.

"This is Roman. Roman Gray. Roman, this is our female lead, Laura Turner," Mike said when he introduced them.

"Roman? Are you part of the acting crew?" She asked, offering her hand.

"No, I'm here for realism," he smiled, and took her hand in a firm, but not crushing shake.

Roman, was easily 6'3'' and had to weigh in at 260, just because of the muscles rippling around his exposed chest and shoulders. She could count his abdominal muscles, and his waist was narrow, expanding into some serious thighs. He only wore an open black leather vest, blue jeans, with black bike boots. The watch on his left wrist was surprisingly expensive, as was the gold chain around his neck. His dark hair was wavy and full, and he had slightly sunken eyes, which shadowed when he turned his head in the right way, giving him a very dark feel. His eyes though were killer blue; light, almost too light, but holding around the just right light blue.

"So, technical?" she pried.

"Roman's going to insure that our bikers aren't idiots," Mike explained. "And that our fights look like they are fights, and not hugging matches."

"You have experience in being a biker then?" she asked.

"So you ride with a club?" she continued.

"The Ghost Lights, out of San Diego," he nodded.

"Why do I know that name?" she asked, a little surprised that she did.

"We've been in the news recently," he nodded. "Probably from that." Then he changed the subject, "You were in that zombie flick a while back, right?"

"Yes," she nodded, feeling a flicker of a smile coming to her lips.

"Worse part of that movie," he told her.

"What?" she asked, in a barely controlled gasp.

"Seeing you get torn up like that," he added, a mischievous smile on his lips, "Would have been nice to see more of you before that happened. In fact, that female lead, who was she?"

"Beth Spears," she said automatically, still trying to resolve whether she was insulted or not.

"Yeah, her, she was a ditz. You would have been better in that role," he decided, looking her over.

"She was blond, and had bigger tits," Laura said, with a smile.

"Who gives a shit about blond, and tits don't give talent, apparently," Roman told her.

"Exactly," Mike said when a nod. "Besides, her tits look fake."

Laura looked at Mike, "I don't think they are."

"Doesn't matter," Mike shrugged. "They look that way. Anyway, the reason I'm introducing you to Roman, is that you said you were OK with doing some of the stunt work yourself."

Laura nodded, "Sure, ya know, riding on the back of the bike, doing some of the violence, the bar fight, since I apparently don't actually get hit during that whole scene, which is a little amazing, but I'm not complaining."

"You're behind Brick that whole scene. In the land of make-believe, that's the safest place in the world, so we can't bash you with anything." Mike explained.

"Like I said, not complaining," Laura smiled, while lifting up her hands in submission.

"Good, so, anyway, Roman's going to be working with you on some of the stuff. I wanted you to know who he was, and why his input was important," Mike told her.

"Good to know," she agreed.

In spite of the original tease, Laura discovered that she not only lusted after his body, but that Roman seemed like a genuine person, which was rare in her world. Extremely rare. So rare she almost didn't recognize what she was looking at. Unfortunately, she was pulled away to begin her second scene of the day.

"See you later, hopefully," she smiled at Roman, hoping he picked up on the subtle flirt in her smile.

"Looking forward to it," he nodded, gave her ass a good gaze, and then turned toward the stunt men he was talking with.

Need to keep the jogging up if he's an ass man, she thought to herself.

For nine weeks prior to arriving on the set, she and Brick Tanner were rushed through some amazing training, both for body shape, and for fighting skills. She could do a scorpion kick now that was sure to get her some good reviews, at least with the male population. In the script she was going to be using it three times, against various stunt men. Brick beefed up very nice, and her ass and legs were looking better than ever.

In the head-turning area of life, this movie already paid for itself.

Mike Stevens was a trial to work with. He had in his head, exactly the way a scene should work. The trouble came from his inability to express his vision to the actors. They had to develop a read on Mike, reading his body language more than his words. So, with only two scenes to do today, it was a lot of work and frustration.

Laura wasn't a diva though, and took pride in that fact. She was a worker, and pressed Mike for information, then gave everything she had to each scene. Mike was obviously aggravated with her pressure on him, but he also loved the results. So, at the end of the day, he was smiling, and hugging her around the shoulders. "This is going to kick some serious ass!" he told her, and Brick.

Worn, tired, and tense, she made it back to her trailer at the end of the day. Just as she was going up the small flight of stairs she saw Roman, and gave him a wave.

"You really take this seriously," he told her, strolling over. "I never imagined it was so much work."

"Yeah," he mused. "I mean, it looks so effortless when I'm watching a movie. But I guess that's the point."

"If it was effortless, we wouldn't need realism experts like you," she told him.

He nodded. "Guess that's true, but you really put a lot into it. It was impressive."

"Are you trying to flirt with me?" she teased.

"No," he shook his head, approaching her. "If I was doing that, I would be closer, like this, and I wouldn't waste time with buttering you up, because that happens to you so often, it just rolls off like rain off a duck's back."

He was very close now, and she felt her gut tighten up. "Yeah?"

"Yeah," he said, his voice serious, instructive, nearly dispassionate. "Words are your living, you throw them around like they are toys. They probably don't get through to you at all in the real world. Always on the set, always in character. So, I would have to do something to break through, let you know I was serious. Pop that Hollywood bubble. Flirting just isn't the tool."

He was in kissing distance, and she couldn't help but stare at his lips. "Yeah?"

"Yeah," he nodded, and then ran his hand down her back, to her ass, and as he gripped her left cheek, he kissed her.

The kiss was not a Hollywood kiss, and nothing like her previous experiences. They must issue special lips to tough guys, she mused, as her thighs rubbed together, and she leaned off the bottom step, into his chest.

She tried to keep from falling completely into him, and wrapping her arms around his neck. She lasted for a few moments, but then her arms moved of their own volition, and as he parted her lips to explore her tongue, she rubbed her body against him. His hand fondling her new, improved, ass felt amazing.

He pulled his lips from hers, and she looked him in the eyes, her head spinning, arms still around his neck, "If you weren't serious, if you were just fucking with me right then, I'm going to be very miffed."

"Seriously pissed off," she unriddled.

"Ah. That one I understood," he smiled. Giving her ass another squeeze, and then rubbing it deeply, which she found very arousing. "I'm a serious kind of guy. Not much acting ability."

"Well, you have my attention. My Hollywood bubble is burst. What's on your mind?" she asked.

"Yeah, up the coast, for starters."

"Too tired? You put in a full day, but I'll guarantee you'll feel better in the morning if you let me handle you for a while tonight."